15-year-old Uzbekistan phenomenon Nodirbek Abdusattorov and 21-year-old Polish world no. 15 Jan-Krzysztof Duda are in action in the Banter Blitz Cup today. Abdusattorov takes on Russian GM Maksim Chigaev for a place in Round 3, while Duda goes up against Germany’s Georg Meier in Round 4 for a quarterfinal place against Alireza Firouzja. 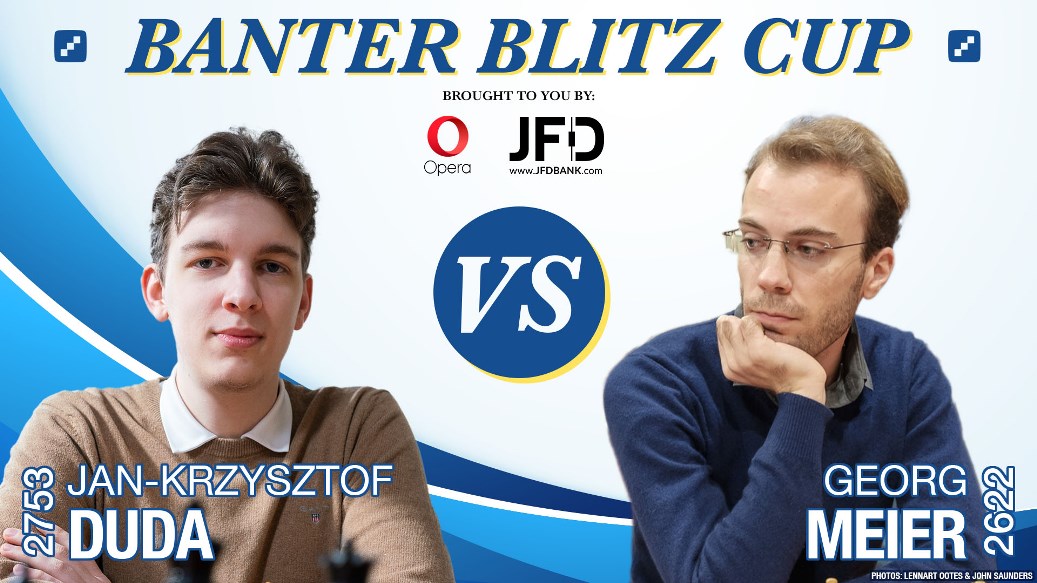 The over-the-board chess scene may have ground to a virus-imposed halt, but the online action goes from strength to strength. Magnus Carlsen will be playing Banter Blitz against chess24 Premium members on Monday at 18:00 CET...

...while the Banter Blitz Cup is closing in on its final stages. In case anyone hasn’t been following yet, each match consists of up to 16 three-minute blitz games, with the first player to 8.5 points winning. The “banter” element is of course that the players must commentate live on their moves as they play!

The top half of the draw is ready for the quarterfinals:

Today’s games take place in the lower half of the table, where only Sunilduth Lyna Narayanan and Alireza Firouzja are so far confirmed. The quarterfinals there will be:

Let’s take a look at the two matches and what we can expect:

You can watch commentary in English from Abdusattorov or Russian from Chigaev at 18:00 CET while chatting on our Shows pages. Here’s a direct embed of Nodirbek’s YouTube:

The winner of this match is guaranteed at least $800 (the overall winner of the tournament gets $14,000) and will play Venezuela’s Eduardo Iturrizaga in Round 4. Let’s take a look at the players.

15-year-old Nodirbek Abdusattorov won the World Under 8 Championship in 2012 and hit the headlines in 2014 by beating two experienced grandmasters as a 9-year-old. By earning the grandmaster title at the age of 13 years, 1 month and 11 days he’s currently 5th in the list of youngest players ever to gain the title, behind only Karjakin, Gukesh, Sindarov and Praggnanandhaa – Magnus Carlsen needed another 3 months and 16 days.

His classical rating is already 2627, and his two performances so far in the Banter Blitz Cup have been frighteningly good. In Round 1 he beat 6-time Argentinian Champion Diego Flores 9:3 and then in Round 2 he took down Cuban-born and currently US Grandmaster Leinier Dominguez. Leinier is not just world no. 14 and a former World Blitz Champion but the winner of last year’s Banter Blitz Cup that was held only in Spanish. Nodirbek nevertheless scored a resounding 8.5:5.5 victory that included technically outplaying his formidable opponent in multiple games (replay the games with computer analysis here):

You can watch the full video below and admire how calmly and swiftly he sees almost everything:

Of course that didn’t mean there weren’t some mishaps along the way!

So Maksim Chigaev will have his work cut out, but although the 23-year-old Russian Grandmaster is lower rated at classical chess (2589) he has the edge so far in blitz (2659 compared to Nodirbek’s 2633). One of his best results was finishing runner-up in the tie for 2nd place in the 2019 Tata Steel Challengers, with Nodirbek doing the same in this year’s event.

Maksim has also shown himself to be a fighter. In Round 1 of the Banter Blitz Cup he beat GM Jose Ibarra 8.5:6.5 while in Round 2 he beat well-known US Grandmaster Aleksandr Lenderman 11:9 after the match was tied at 8:8 - two extra pairs of 3-minute playoff games were needed.

This is a big one, with the players competing for a place in the quarterfinal against 16-year-old Alireza Firouzja as well as a guaranteed $2,000. Both will commentate in English, and you can watch here at 20:00 CET: Duda, Meier

21-year-old Jan-Krzysztof Duda needs little introduction. The Polish no. 1 is currently the world no. 15 and also one of the world’s best speed chess players. He’s won the European Rapid Championship, pushed Magnus Carlsen all the way as he finished runner-up in the World Blitz Championship in 2018, and has a current blitz rating of 2799. In this year’s event he’s powered through to Round 4, beating David Martinez (8.5:0.5), Jules Moussard (8.5:4.5) and Romain Edouard (8.5:3.5):

You can rewatch that last match below (or play through the games with computer analysis):

His opponent is 32-year-old German Grandmaster Georg Meier, who with a 2620 (2629 blitz) rating is the clear underdog against Duda (2753 and 2799). On the other hand, Meier has shown himself to be extremely fast and a master of the essential blitz skill of flagging (winning on time) as he crushed the dreams of Milos Perunovich (9:3), Parham Maghsoodloo (8.5:6.5) and Igor Kovalenko (8.5:5.5) – that came despite Kovalenko having a helper!

Once again, here are the links to today's Banter Blitz Cup action: