Sunday saw the seventh and final round of the Dortmund Sparkassen Chess Meeting supertournament. The only winner of the day was Vladimir Kramnik, who beat his compatriot Evgeniy Najer to end the event on +1 together with Leinier Domínguez and Fabiano Caruana. Big Vlad even finished above those players on the first tiebreak of most games played with the black pieces. Our look back at the event of course has to start with Maxime Vachier-Lagrave, though, since the French no. 1 dominated from start to finish. 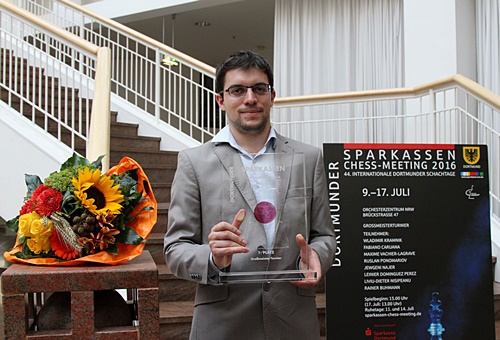 MVL leaves Germany not only as the champion but the world no. 2 | photo: official website

You can replay all the Dortmund games, with computer analysis and the option to make your own moves, using the selector below:

So what did we learn from the 44th edition of Dortmund?

Maxime Vachier-Lagrave, born in 1990 like Magnus Carlsen and so many other top players, has been a member of the elite for years now. After climbing rapidly he reached a peak of 2775 in February 2015, but then surprisingly saw his rating plunge. Since then, however, he's reduced the number of tournaments he's played and is steadily on the rise. 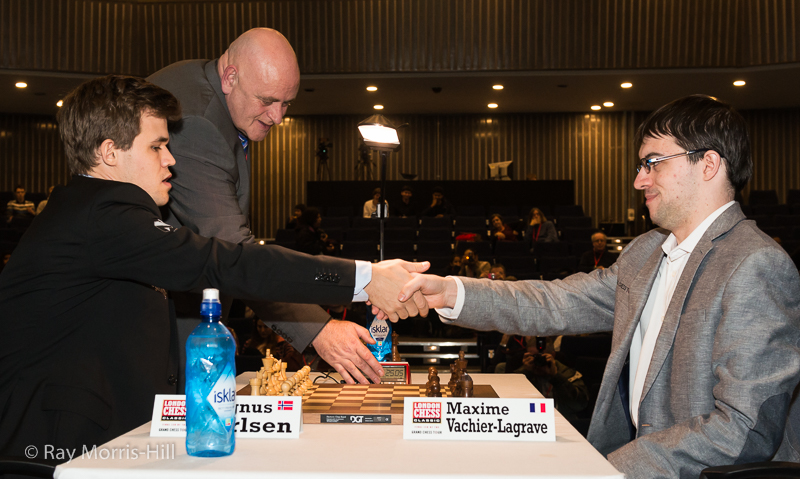 The 2015 London Chess Classic playoff between the current live nos 1 and 2 on the world rankings | photo: Ray Morris-Hill

In December last year he ended his Grand Chess Tour participation impressively by reaching a playoff against Carlsen and Giri. This year he lost out to Nakamura in the Gibraltar playoff and then finished third in Norway Chess. Maxime seems to have found the right balance in his play.

With his impressive +4 in Dortmund, MVL has climbed to second place on the live ratings and shown that he's in the elite to stay. With sponsors appearing in Paris it's tempting to imagine a future World Championship in the French capital. Maxime told Georgios Souleidis after the tournament:

This is definitely one of the greatest achievements of my career. The result gives me a lot of self-confidence - also because I remained unbeaten.

He responded to the question of whether he sees himself as a challenger for Magnus Carlsen:

After this tournament I'm the world no. 2. If I didn't consider myself a challenger with this position something would be wrong.

It'll be interesting to see how Maxime's career develops from here. Next up is a match in Biel against our very own Peter Svidler!

Since Kasparov retired from professional chess it seems as though preparing long theoretical lines has gone out of fashion. The style championed by Carlsen has created a new wave of pragmatism and people aiming for play at the board. However, at least one player has demonstrated that preparing forced lines is still effective. 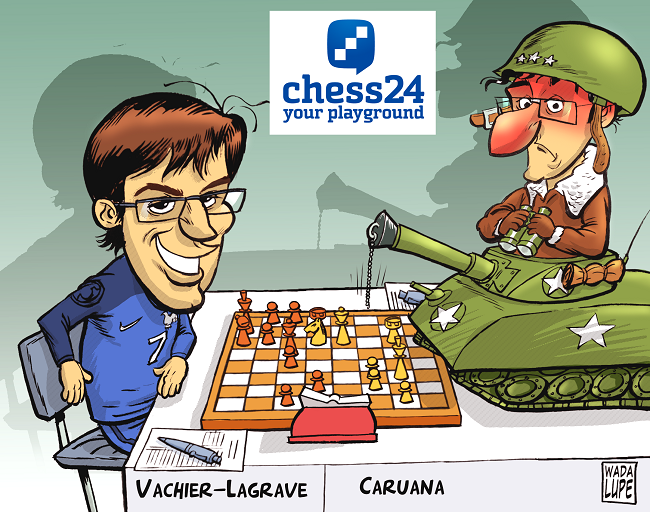 Vachier-Lagrave obtained two of his four wins in Germany with the Najdorf Sicilian. In the first round he won a pawn against Caruana and went on to win a game in which the US player's initiative had seemed to be sufficient to score at least a draw. Against Najer he entered into a deeply-explored variation and demonstrated an in-depth knowledge of the complications. The Russian felt the pressure, spent too much time thinking in a position the Frenchman had clearly prepared in advance and committed a fatal error soon afterwards.

We can add to that his dramatic victory over Giri in Round 2 of this year's Norway Chess tournament. MVL is following in Kasparov's footsteps and threatening the Norwegian's domination.

3. Kramnik is a persistent guy

Since his victory over Kasparov in the 2000 World Championship match, Kramnik has mainly played a much more pramatic style, where he exploits his great strategic skill and persistence in endings. Although in recent years he'd switched back to a more tactical approach, in this year's edition of Dortmund the Russian opted to return to the earlier style. 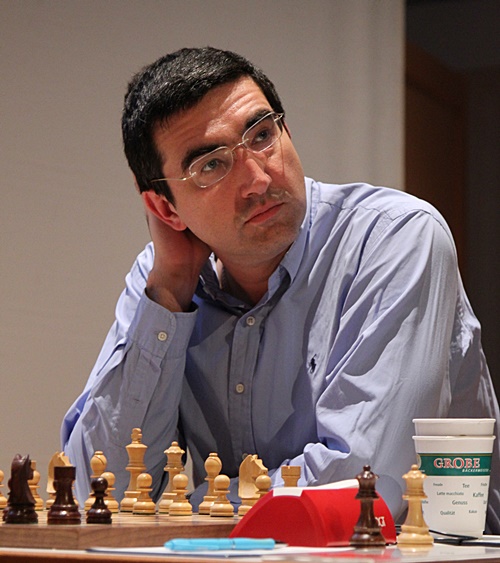 Kramnik finally got his long-awaited win in the last round | photo: official website

In Rounds 5 and 6, Kramnik attempted to exploit tiny advantages in the ending against Caruana and Nisipeanu. Despite the Russian having frequently mentioned the difficulty of maintaining enough energy after 40 years of age, that didn't stop him playing 85 and 146 moves on consecutive days. There's no question that Big Vlad is still motivated! That's also good for the tournament organisers, who announced Kramnik will return for the next edition in 2017, with the event dedicated to his 25th (!) appearance.

You often hear people complain that elite players stay at the top of the rating list because, in some way, their ratings are protected by playing in closed tournaments exclusively against similarly high-rated opponents. In recent years, though, we've seen a resurgence of open tournaments and organisers keen to get chess players of very different levels to meet. The victories of Carlsen and Nakamura in the events in Qatar and Gibraltar show that there really is a difference in class. 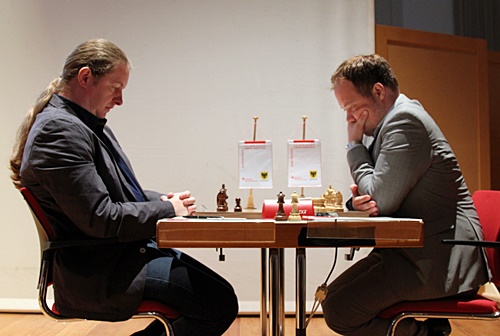 Despite the small difference in Elo, one of the German players (Nisipeanu) did much better than the other (Buhmann) | photo: official website

In Dortmund, the three players with a rating below 2700 finished in the last three places. While Nisipeanu took a pragmatic approach and scored seven draws, Najer and Buhmann suffered against their Top 10 opponents: Caruana and MVL beat both, while Kramnik scored his only win against Najer and almost claimed a beautiful win over Buhmann.

5. It would do Dortmund no harm to expand its lineup

In recent years the chess circuit has grown in both quantity and quality, with organisers making great efforts to introduce new ideas and attract a larger public. The Grand Chess Tour and opens with elite players are a case in point, with live commentary and video from the venue now standard. 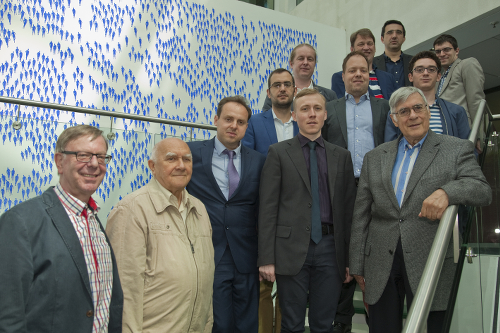 There's no doubt that the traditional tournaments remain a great attraction for chess fans, with Wijk aan Zee and Dortmund drawing on their many years of experience in inviting top players. This edition of Dortmund featured no less than three of the top four players in the world at this moment in time, so to see them face off against each other for another couple of rounds would have been more than welcome.

Let's hope budget restrictions and other factors can be overcome so that we can enjoy this great tournament even more.

Don't forget to check out the videos from this tournament and other events on our YouTube channel. More of the world's best are in action in Bilbao, where you can, of course, follow the action with live commentary here on chess24.