Richard Rapport beat defending champion Ian Nepomniachtchi as the first Dortmund tournament of the post-Kramnik era got off to a dramatic start on Saturday. Leinier Dominguez continued his exceptional form since returning to classical chess to re-enter the Top 10 on the live rating list with a victory over German no. 1 Liviu-Dieter Nisipeanu. Daniel Fridman beat Kaido Kulaots in the day’s other win, with only Radjabov-Wojtaszek ending in a draw despite featuring a spectacular piece sacrifice. 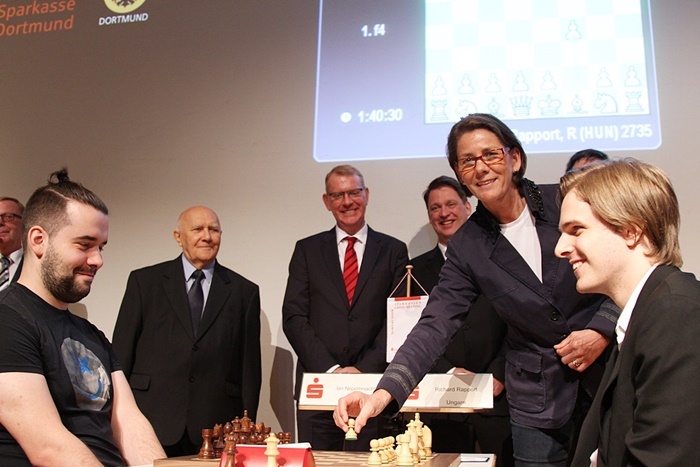 The game started all smiles as Dortmund Mayor Birgit Jörder made the first move, but then it was war! | photo: Georgios Souleidis, official website

You can replay all the games and check out the pairings from Dortmund using the selector below:

In January this year the 14th World Chess Champion Vladimir Kramnik announced his retirement from classical chess, a bombshell perhaps felt nowhere more strongly than in Dortmund. The Sparkassen Chess Meeting has been synonymous with Kramnik for so long that it’s almost a shock not to see his name on the list of players. Since the 2002 edition, which was a Candidates Tournament to play a World Championship match against him, he’d played in 16 editions in a row up to 2018. He won the event 10 times, first in 1995 and last in 2011, and although he’d sometimes suffered in recent years he’d always given the tournament some real star power. 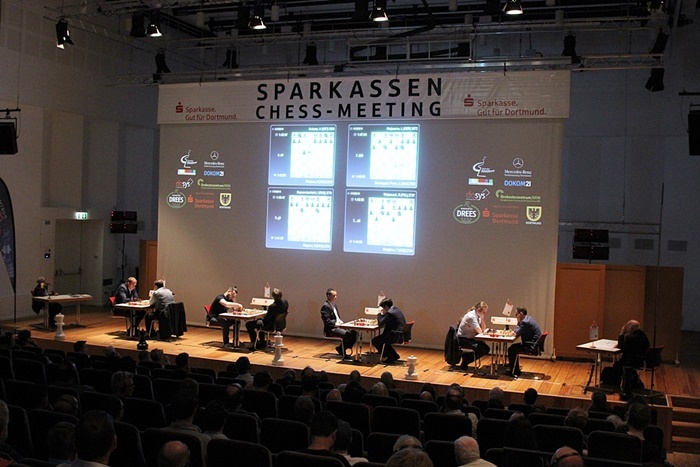 Much has stayed the same in Dortmund as the event is played on the big stage of the Orchestra Center with the focus on local fans - there's no video of the players and the games are broadcast on the internet with an anti-cheating delay | photo: Georgios Souleidis, official website

This year the tournament also overlaps with the Riga Grand Prix, but the 7-round event still features some top players and a mix of ratings that’s likely to lead to plenty of decisive games. That was certainly the case in Round 1: 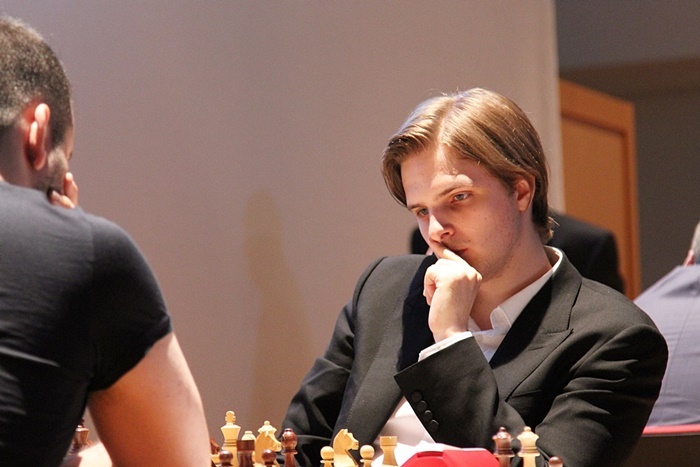 Hungary’s Richard Rapport has a huge number of admirers for his original and daring approach to chess, but in recent years they’ve been somewhat disappointed by his failure to break into the absolute elite. He’s now 23, and perhaps it’s time for a new assault on the top! He recently won the 8-player Danzhou GM tournament with an unbeaten +2, and while you might point out he only beat the lowest-rated players there – Ernesto Inarkiev and Bassem Amin – he’s now begun Dortmund by taking down the top seed, world no. 6 and defending champion Ian Nepomniachtchi.

Richard felt he had no real advantage out of his English Opening, but “somewhere in the transition to the ending my opponent missed a few ideas”. Things had become critical when 29.Be4! appeared on the board:

The threat is Rd6, winning the queen, and moving the king to allow the queen a retreat would leave White totally dominating the board. That meant 29…Qe6 was forced, but after 30.Qxe6 fxe6, Black’s pawn structure with doubled isolated e and g-pawns was ghastly. The opposite-coloured bishops gave Nepo some hope of surviving, but a few inaccuracies left White with an unstoppable e-pawn and the game was over on move 56: 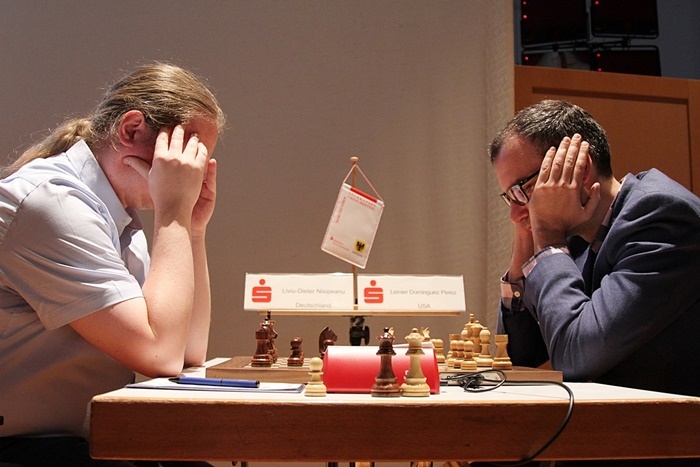 Despite that loss Nepomniachtchi stayed at no. 6 on the live rating list, while Cuba’s Leinier Dominguez moved up to no. 10 with a victory over German no. 1 Liviu-Dieter Nisipeanu. Dominguez has come back with a real passion for classical chess after not playing a game in two years while he worked through issues with gaining US residency. He almost won the US Championship and starred in the Russian Team Championship, and he got off to a very convincing start in Dortmund. This was perhaps the critical moment of the game:

Both players described 23…d5?! as a mistake, but the computer’s choice of 23…Be6!? 24.Bxa6 and only then 24…d5! isn't something you do lightly. White was soon a pawn up, and the point of no return seems to have been an attempt to restore the material balance: 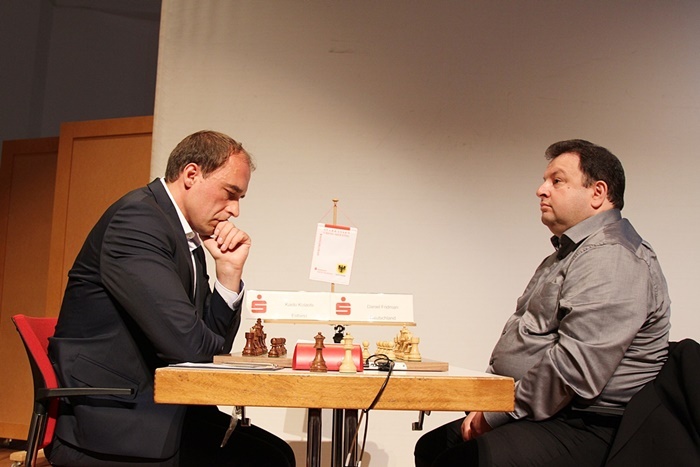 Germany’s Daniel Fridman, who commentated here on chess24 with Jan Gustafsson during the recent Croatian tournament, noted after this game that it was his first win in Dortmund, despite playing in the 2012 and 2013 events (13 draws, 5 losses). Estonia’s Kaido Külaots qualified by winning the Aeroflot Open earlier this year, but was in for a surprise on move 1 as Daniel did something he almost never does and played 1.e4. His choice of meeting the Siclian with 2.c3 was something he last did a decade ago, but it worked out to perfection. White was well on top by the time he pushed that pawn again with 17.c4:

Kaido felt it was the time for drastic measures and offered a sacrifice with 17…Bxf2!? Although capturing on d5 would open up the c-file for an assault on the white king, it was very playable, but Fridman’s ignoring the piece with 18.Kb1 couldn’t be criticised as he soon built up an absolutely winning position. At one point he seemed to lose his away among all the enticing options, but Kulaots couldn’t stay afloat in severe time trouble: 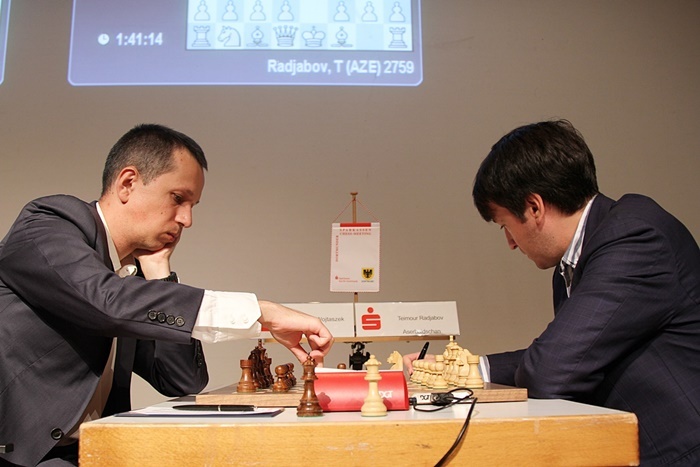 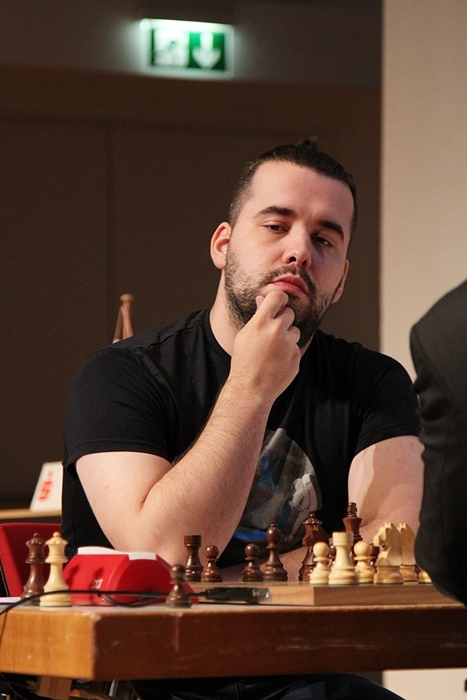 After a tough end in Croatia it was a tough start for Ian Nepomniachtchi in Dortmund | photo: Georgios Souleidis, official website

That of course leaves Dominguez, Rapport and Fridman as the early leaders – the following table will update as more rounds are played:

In Round 2 Nepomniachtchi will be looking to bounce back immediately against Kulaots, while Rapport-Dominguez is a clash of the leaders. The players don’t need to spare any efforts, since they already have a rest day on Monday and then again on Thursday.