Vladimir Kramnik is out of the running to win an 11th Dortmund title after crashing to a second straight defeat, this time against Anish Giri. We also know that Radek Wojtaszek won’t defend his title and Liviu-Dieter Nisipeanu will finish last, but otherwise everything’s up for grabs. Ian Nepomniachtchi goes into the final round with a half-point lead after a great escape against Jan-Krzysztof Duda, but Duda, Giri, Meier and Kovalev can all win the tournament if Nepo doesn’t win his last-round game.

Anish Giri has come roaring back with two wins with Black and now has a great chance of winning the tournament - if he beats Duda in the final round | photo: Georgios Souleidis, official website

The key game for the overall outcome of the tournament was expected to be Duda-Nepomniachtchi, and it didn’t disappoint. In a 3.Bb5 Sicilian sole leader Ian Nepomniachtchi found himself gradually outplayed, with 20-year-old Jan-Krzysztof Duda taking full control of the d5-square and then methodically dismantling the black queenside.

The critical moment of the game then came on move 51:

White is two pawns up, with a space advantage, but Black’s counterplay shouldn’t be underestimated. For instance, the attempt to “consolidate” immediately with 51.Na4?? loses on the spot to 51…Qd8!, and in fact every knight move is bad. Duda had good queen moves at his disposal, though, and one apparent path to victory – 51.g5! Even there, though, things aren’t so simple – after 51…fxg5 52.hxg5 Qd8 53.g6+ Kh8 Black is threatening Qg5+ and perpetual check or worse: 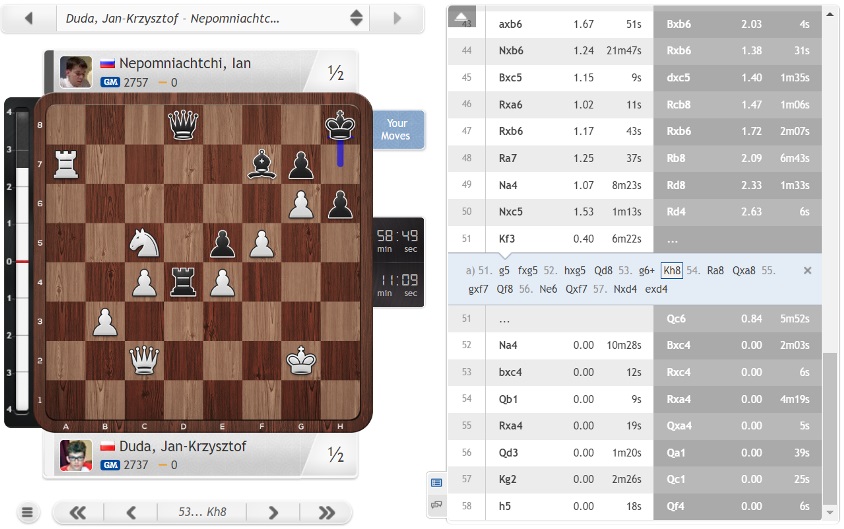 The best solution is the dramatic 54.Ra8!!, when after 54…Qxa8 55.gxf7 Qf8 56.Ne6 Qxf7 57.Nxd4 exd4 the outcome isn’t yet a foregone conclusion, but White would be a strong favourite in the queen ending. In the game, though, 51.Kf3?! Qc6! 52.Na4?! gave Nepomniachtchi the chance to end his suffering immediately with a temporary piece sac:

52…Bxc4! 53.bxc4 Rxc4 54.Qb1 Rxa4 55.Rxa4 Qxa4 and White’s queenside pawns had gone, with a draw agreed shortly afterwards. That meant that instead of leap-frogging ahead of his opponent Duda remained half a point behind, where he was joined by three more players, including Anish Giri.

Duda had missed a great chance to close in on a supertournament triumph - now he needs to beat Giri with Black while other results go his way in the final round | photo: Georgios Souleidis, official website

Giri’s opponent was Vladimir Kramnik, who, after his loss the day before, could be relied upon to play only for the win he needed to stay in contention for first place.

Vladimir’s quiet Colle–Zukertort System in the opening was fooling no-one, therefore, and Black had to be alert after 27.Rd3:

White may be a pawn down, but the threat is g4, Ne5 and Rcd1, winning material if Black doesn’t react fast. After 13 minutes Giri decided to give up a pawn to simplify the situation with 27…e5!?, and after 28.Nxe5 Rd4 29.Rf3 Nh4 30.Re3 Nf5 now was the time another player might simply have played 31.Rf3, when a logical draw by repetition would most likely have followed.

At this stage in his career Kramnik has no interest in caution or respectability, though, and he played on with 31.Ree1. In itself there was nothing wrong with that decision, but two moves later Giri picked up the pawn on a2, meaning that if Kramnik’s pressure on the black king didn’t pay off he was going to be doomed in the long run. That’s what happened, and after a shaky time trouble phase the game was essentially over when the players reached move 40:

Kramnik was in no hurry to resign, but by move 59 the black a-pawn had reached a2, and five moves later he finally conceded defeat. That meant that after a 7 losses, no wins record against Kramnik before this year Giri has now won two games in a row against his former nemesis. Giri is also now only 0.2 points behind 5th place Kramnik on the live rating list, while Ding Liren in 4th suddenly has a 16-point advantage over Kramnik.

Grandmaster Niclas Huschenbeth takes an in-depth look at that game:

The other decisive game was a first win of the tournament for Georg Meier, who piled misery on Liviu-Dieter Nisipeanu. It was an opening success for Meier, whose Catalan preparation meant that when he took a 33-minute think on move 16 what he was contemplating was entering an ending that was close to winning for White. He went for it, and seems to have accurately calculated the complications that began on move 20:

A 4th loss for Nisipeanu and a 1st win for Meier | photo: Georgios Souleidis, official website

Wojtaszek-Kovalev ended in a draw and provided confirmation that Radek Wojtaszek wouldn’t be defending his Dortmund title. In this particular game he came close to a win, but a couple of imprecise moves saw a significant positional advantage fade away.

Not this year for Radek Wojtaszek, though Vladislav Kovalev still has chances of 1st place if he beats an "on-tilt" Kramnik in the final round | photo: Georgios Souleidis, official website

That meant that Kovalev, Meier, Giri and Duda are all just half a point behind Nepomniachtchi going into the final round:

The pairings are as follows, with only Nisipeanu-Wojtaszek of no signficance for the fight for 1st place:

The simple scenario is of course if Nepomniachtchi beats Meier with the white pieces, when he wins the tournament outright. If he draws or loses, though, it gets a lot more complicated. There are no playoffs and the first tiebreaker is “most games with Black” (good for Meier, Giri and Kovalev but not Nepo or Duda), followed by “most wins” (good for Giri or Duda if they win in the last round). All the players have a mathematical chance, while for instance Giri knows that if he beats Duda only a win for Nepomniachtchi can stop him winning his first supertournament.

Don’t miss all the action starting two hours earlier at 13:15 on Sunday live here on chess24!