Ian Nepomniachtchi was announced on Friday as part of the Russian Olympiad team alongside Vladimir Kramnik, but after their Round 5 game in Dortmund there may be some arguments over board order! Nepo was surprised by Kramnik in the opening, but later sacrificed a pawn in order to shut one of his opponent’s bishops out of the game. The positional win that followed was one Kramnik himself would have been proud of, and gave Ian the sole lead with two rounds to go after the other games all ended in draws. 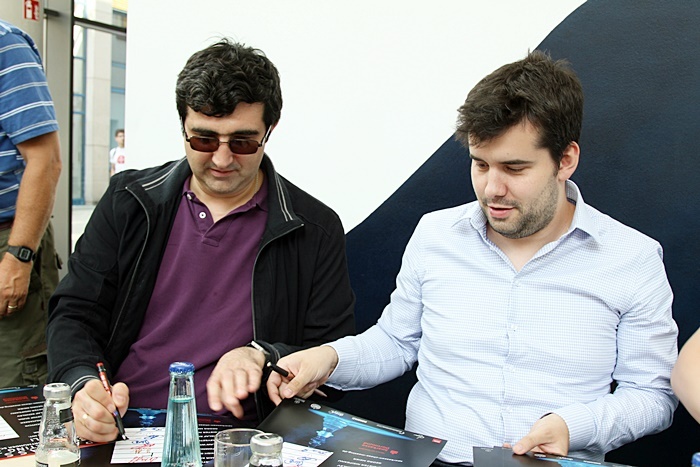 You can replay all the 2018 Sparkassen Chess Meeting games using the selector below:

Nepomniachtchi gives Kramnik a taste of his own medicine

While the Dortmund Round 5 games were underway the Russian teams for the 2018 Olympiad in Tbilisi were announced and, as always for a country with such an embarrassment of chess riches, there was controversy. Going strictly by rating the line-up would be Kramnik, Karjakin, Grischuk, Nepomniachtchi and Svidler, but instead Grischuk and Svidler were left out in favour of Jakovenko and Vitiugov:

You might also argue that if rating wasn’t strictly going to be followed it was a chance to trust in youth, with the likes of Vladimir Fedoseev, Vladislav Artemiev, Dmitry Andreikin, Maxim Matlakov and Daniil Dubov all available. However, it’s enough just to list those players - automatic picks for most countries - to see how tough a job it is to select the Russian team!

All smiles before the start | photo: Georgios Souleidis, official website

Back to Dortmund, though, where former World Champion Vladimir Kramnik played the aggressive Yurtaev Variation of the Ruy Lopez, something he’d previously done only once in a game against Vishy Anand in last year’s Norway Chess. That already had Nepomniachtchi, who’s been playing at a crazy speed in Dortmund this year, thinking hard on move 6, when he picked not Vishy’s 6.Nc3 but 6.c3. Kramnik continued to play instantly, though his choice a couple of moves later was anything but trivial:

After 8…Rb8 Kramnik would have transposed back to the absolute main line, covered extensively in Peter Svidler’s video series Svidler’s Archangels (the opening is also often known as the Arkhangelsk). 8…Bg4 and 8…Bb7 also lead to well-known positions, but Kramnik’s 8…b4!? was very rare. Soon he’d given up a pawn for the bishop pair and the kind of active play Black is hoping for in this line, but, as so often in modern chess, his first significant think of the game led to a big strategic mistake:

The computer claims, and who are we to argue, that Black is doing just fine after useful developing moves such as 17…Re8 or 17…Bd7, while there’s nothing wrong with taking White’s bishop on h4. Instead, though, Kramnik suddenly got materialistic and decided to win his pawn back with a little combination: 17…Qf4?! 18.Bg3 Nxg3 19.hxg3 Qxg3 only to run into 20.c5!

The queen must move, and after 20…Qg6 21.Rc1 the a7-bishop is suddenly completely blocked out of the game, while a direct attack with 21.Bh3 22.Nh4 Qg4 is nicely met by 23.Rc4!, something Kramnik must have pondered deeply in the 26 minutes he thought over 21…Qf7. It’s the kind of thing we’re more used to seeing happen to Kramnik’s opponents, with the 2011 London Chess Classic game between Kramnik and Nigel Short a memorable example. 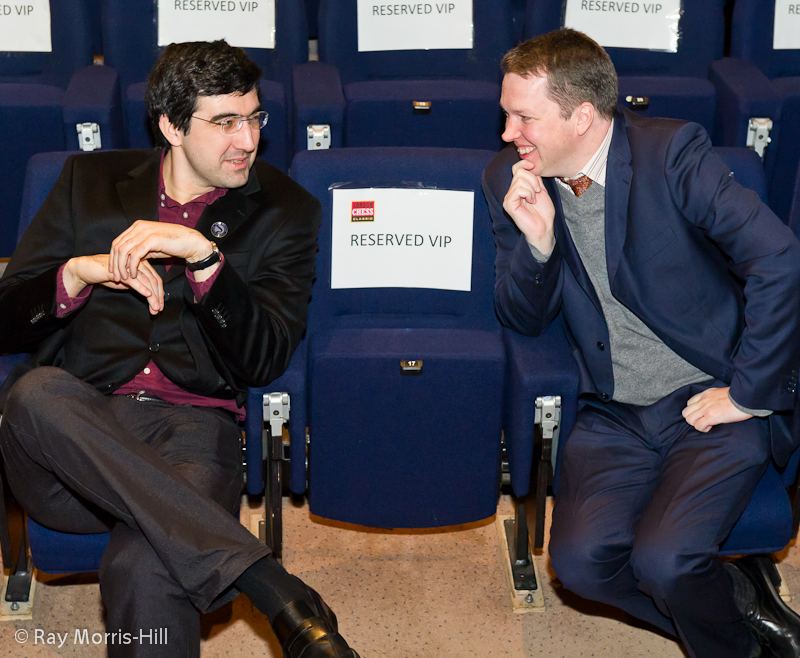 Little did Short know what was about to happen... | photo: Ray Morris-Hill

Nigel confessed the desire to resign was strong after Vlad’s 19…d5!

The b3-bishop is now just an onlooker, and remained trapped until Short resigned on move 43:

In Dortmund it was Nepomniachtchi who played the Kramnik role | photo: Georgios Souleidis, official website

Essentially it was the same story in Dortmund with the a7-bishop, and if we fast-forward to the end we can see it still trapped in its cage in the final position after 41.Nd4:

One of the saddest bishop pairs you’ll ever witness!

That wasn’t quite the whole story, since chess is a very concrete game and Kramnik may have had some chances to survive if he’d seized the opportunity presented by 31.Ne3?!

31…f5! looks like a ridiculous move at a glance, but 32.f3 runs into 32…Qf6, hitting the undefended h4-knight, while …f4 is also in the air. There would have been practical chances, but after 31…Bd7? 32.Qxb4 a5 33.Qxa5 c6 34.d6 Nepomniachtchi had gotten everything he could possibly desire. He commented afterwards, “Naturally I’m happy with the result, but much more so with the quality of my play”.

The other games frankly couldn’t match that drama. Liviu-Dieter Nisipeanu’s misery continued as after three losses in a row he had to defend a position a pawn down against Vladislav Kovalev, but he never looked in real danger as he achieved a draw in 62 moves.

Giri continues to catalogue the tough life of a chess professional...

Anish Giri tried for five moves less to make his bishop pair count against Radek Wojtaszek, but the Polish grandmaster held firm. The game with the other Polish player, Jan-Krzysztof Duda, looked promising after the aggressive 9.g4!?

In the space of four moves, though, Georg Meier had stopped that pawn with g5 and castled queenside, nullifying all White’s attacking hopes. If anyone was better it was Black when a draw by repetition was reached on move 33.

That means that Nepomniachtchi is the sole leader on 3.5/5 going into the last two rounds, with supertournament newcomers Vladislav Kovalev and Jan-Krzysztof Duda just half a point behind.

In Round 6 Kramnik will be looking to bounce back immediately with White against his "client" (until Tata Steel this year) Anish Giri, while Duda-Nepomniachtchi is another big game for the final standings. Follow all the action live here on chess24 from around 15:15 CEST on Saturday!