Jan-Krzysztof Duda beat his Polish compatriot Radek Wojtaszek for the second game in a row to remain the sole leader in Dortmund on 2.5/3 and enter the world’s Top 20. A dramatic day also saw Liviu-Dieter Nisipeanu swept aside by Ian Nepomniachtchi, who ended the game with 2 hours and 11 minutes remaining on his clock, while world no. 6 Anish Giri fell to defeat against world no. 97 Vladislav Kovalev. Only Vladimir Kramnik and Georg Meier have drawn all their games so far.

It's a while since we had a new member of the chess elite, but Duda might make it | photo: Georgios Souleidis, official website

You can replay all the games from the 2018 Sparkassen Chess Meeting in Dortmund using the selector below:

The Dortmund supertournament again has a relaxed schedule this year, with rest days after Rounds 2 and 4, something usually seen only in World Championship matches. The aim seems to be to allow the short event to make full use of two weekends, and Anish Giri, who after an escape against Nepomniachtchi in Round 1 had a very quick draw against Georg Meier in Round 2, wasn’t complaining:

After drawing the first two games with Black it was clear that playing White in Round 3, against a player he outrated by almost 130 points, was the moment for Anish to try and kick-start his tournament. Instead, though, he found himself surprised by Vladislav Kovalev in the opening as early as move 2, with 1.e4 c5 2.Nf3 Nf6!? a relatively rare line of the Sicilian only championed at the very top level recently by Shakhriyar Mamedyarov, who played it in the recent Grand Chess Tour events and in Tata Steel earlier this year. Giri immediately sank into a six-minute think before going for 3.e5, and continued to play slowly thereafter.

Aeroflot winner Vladislav Kovalev is making the most of his ticket to Dortmund | photo: Georgios Souleidis, official website

Kovalev was also taking his time, however, and White had a slightly better position until Giri’s unfortunate 35.Qd1? transformed the game:

In one move the world no. 6 had abandoned the e3-square, the f4-pawn and allowed Kovalev to eliminate his one weakness with 35…d4!. White can’t capture the pawn without allowing Qe3+ to follow with decisive effect, when it’s not just that the f4-pawn falls – the white king is also fatally weak. Giri instead struggled on with 36.Qd2!, but after 36…dxc3 37.bxc3 it was now White trying to defend a crippled pawn structure.

Anish came close, but the pressure told and the final stages began on move 66:

66…g4! 67.hxg4 Qxg4 68.Qg6 Qxd4+ and Black had won a pawn with the white king also in huge danger. Anish could only prolong the struggle another five moves before conceding defeat.

Not again... Wojtaszek has suffered at the hands of Duda in recent months | photo: Georgios Souleidis, official website

If Kovalev’s first game against a top 10 player couldn’t have gone much better, then you can say the same for the tournament as a whole for 20-year-old Jan-Krzysztof Duda. In Round 3 he scored his second win in a row to move to 2.5/3 and enter the world Top 20: 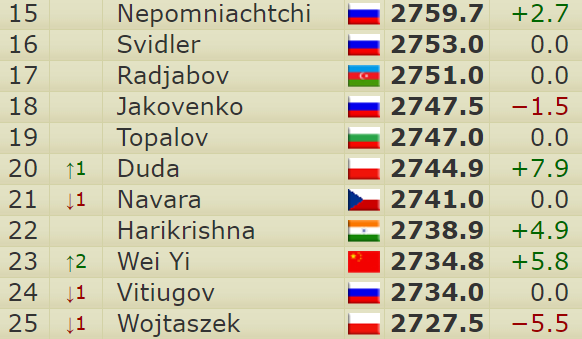 Duda is now the clear Polish no. 1, but probably has his sights set higher | source: 2700chess

His victim was the now former Polish no. 1 Radek Wojtaszek, who also lost to his young apprentice exactly two months ago in the Polish Championship. Like Kovalev, Duda sprung a surprise on move two, meeting 1.d4 Nf6 with 2.Bg5, the Trompowsky, an opening he’d never played before in a classical game. Soon both players were on their own, and Wojtaszek took a dramatic decision to sacrifice both of his queenside pawns:

Wojtaszek admitted to Georgios Souleidis afterwards that he’d completely overlooked 23.Qa4!, when White regains the piece with a dominant position. 23…Rb7 might have given Black some chances of survival, but after 23…Rd2?! in the game the last remaining hope for Radek was his opponent’s time trouble. The youngster held firm, though, and when Duda made the time control with 40.Nh5 it was time for Wojtaszek to resign:

The tripled f-pawns are just the most visible sign of how much had gone wrong for the defending champion. 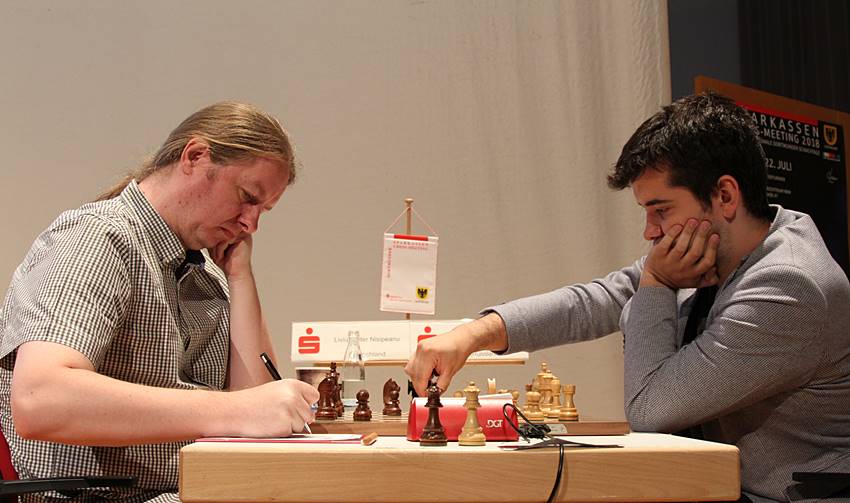 Once again Nepomniachtchi played a classical game as though it was rapid, but this time he also scored an easy win | photo: Georgios Souleidis, official website

The biggest challenge still lies ahead for Duda, who is yet to face Kramnik, Giri and Nepomniachtchi, with the latter having beaten Duda in both the World and European Team Championships. Ian Nepomniachtchi looks in good form in Dortmund as well, with his win over Liviu-Dieter Nisipeanu coming incredibly smoothly:

In hindsight this was perhaps the moment of a Queen’s Gambit Declined when Nisipeanu should have eliminated the white knight with 16…Nxa4, since after 16…Rhe8!? 17.Nc5! White never looked back. The most time he spent on a move all game was just under six minutes, with Nepo commenting afterwards that he’d analysed the position very well beforehand and was also able to use his opponent’s time. Soon it was just a question of when Black’s position would finally collapse:

And the end, when it came, was pretty:

Black is in complete zugzwang.

Check out Grandmaster Niclas Huschenbeth's analysis of that game:

The remaining game saw Vladimir Kramnik trying hard to improve on his 6 wins to 1 record against Georg Meier. 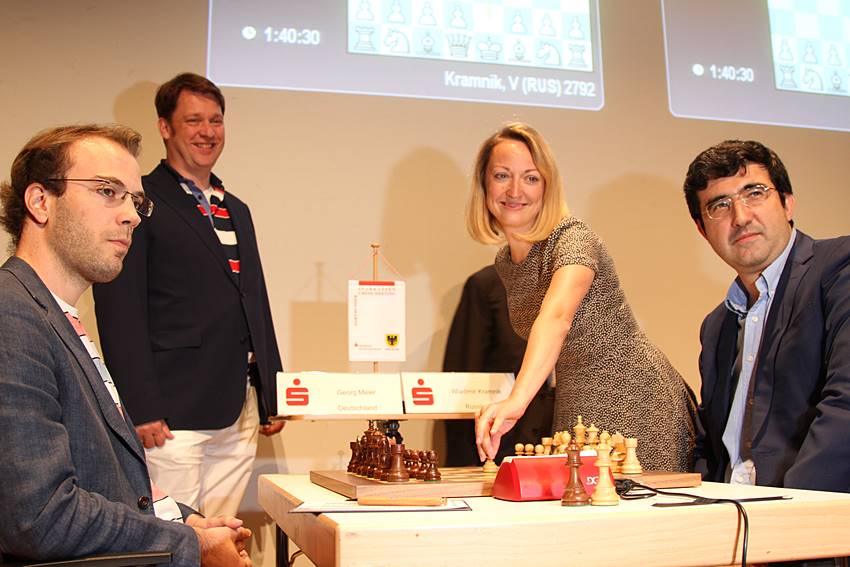 For a while it looked as though it would follow the script of earlier encounters, since Meier allowed Kramnik to seize the centre of the board with his pieces:

23.g4!? was perhaps a somewhat artificial way to try and make something happen, though, with the kingside “pawn storm” also weakening White’s own king position. There were tense moments, but ultimately Kramnik was frustrated again.

That leaves the standings as follows after three of seven rounds:

The big clash of Wednesday’s Round 4 is also the biggest test yet for Duda, as he takes on Kramnik with the black pieces. It’s a key game for both players, since given the tournament situation Vladimir really needs to play for a win – not that he ever does anything less with White! In the other games Meier-Kovalev, Nisipeanu-Giri and Wojtaszek-Nepomniachtchi the higher-rated players have Black, which on paper makes draws a likely outcome.

Follow all the action live here on chess24 from around 15:15 CEST on Wednesday!