20-year-old Jan-Krzysztof Duda beat Liviu-Dieter Nisipeanu with the black pieces to take the sole lead after Round 2 of the Sparkassen Chess Meeting in Dortmund. The world’s top junior was richly rewarded for some mild risk-taking, while former World Champion Vladimir Kramnik’s queen sacrifice gamble almost led to defeat against Radek Wojtaszek. Vladislav Kovalev gave up his queen in better circumstances but never had quite enough to beat Ian Nepomniachtchi. Meier-Giri was the one non-game, ensuring the players could watch not just the World Cup final but the build-up! 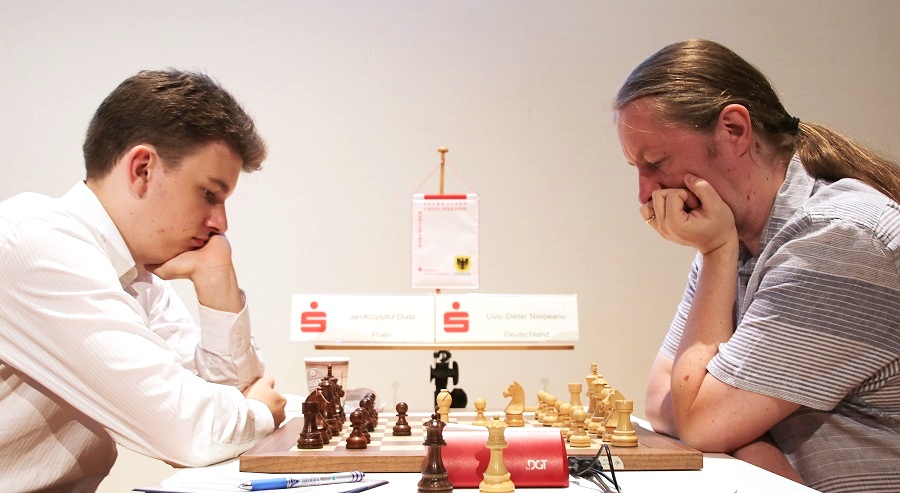 JK Duda gets the first win of the 2018 edition of Dortmund | photo: official website

Replay all the Dortmund games with computer analysis:

A good omen for Duda?

Wieliczka near Krakow is best known as a tourist destination because of its salt mine, but it’s also the home town of a new star on the world chess stage – Jan-Krzysztof Duda. Becoming a grandmaster at 15 years and 21 days wasn’t enough to set any records, but the Polish youngster has subsequently proved more successful than rivals such as Vladislav Artemiev in climbing the rating list, not just crossing the 2700 barrier but threatening to break into the absolute elite. He looks keen to seize his chance, having pressed for 72 moves in Round 1 and then taken a bold decision against Liviu-Dieter Nisipeanu in Round 2.

Duda played the Najdorf, as he usually does, which Nisipeanu tried to tame with the more positional 3.Bb5+. The key moment came after 10.e5:

According to the Opening Tree tab below the chess24 broadcast Black had played 10…Ne4 1154 times here, but 10…Ng8!? just 58 times. When you look at those games by Black the top players who have retreated their knight have tended to do it against much weaker opposition, but Duda spent six minutes before giving it a go against the German no. 1. He later explained, “I wanted to be able to play”.

Nisipeanu was unprepared for that turn of events and sank into a 15-minute think before replying 11.a3, and when Duda then castled queenside and launched his g-pawn down the board the situation was suddenly critical:

It seems White’s only move here was 19.b4!, ready to meet 19…g4 with 20.b5!, while after 19.Rc3? g4! it might seem as though White has attacking chances, but nothing works e.g. 20.Nxb7 Qxb7 21.Rb3 gxf3! would have added to the day’s catalogue of queen sacrifices, but this one is very good for Black. Black was simply winning the crucial d4-pawn, with Nisipeanu regretting “a series of idiotic moves.” He finally resigned after 32…Qc7:

White is totally tied down (there’s even a mate-in-1 threat) and Black can go on to win more white pawns almost at will.

It’s early days, but Nisipeanu has only lost twice in the last four Dortmunds (including this one). His opponents in those games, Fabiano Caruana in 2015 and Radek Wojtaszek in 2017, both won the event. So it’s a good sign for the youngster, though both those players beat Nisipeanu in the final round, while this year there are still five rounds to go.

Sunday was a big sports day, with the World Cup and Wimbledon finals “competing” with the chess...

If the players’ countries had qualified it might not have been a big surprise to see a number of quick draws, but in the end it was only Meier-Giri that was obviously not going to last long:

Sure enough, 16…Bxc4 17.Bxe5 followed, and after 17…c6 18.Rfe1 Rfe8 White’s extra pawn fell to leave a dead-drawn position. Giri followed the theme afterwards by quipping, “if I'd known that Georg is a football fan…”. Both players claimed to be happy with the result, however, with Giri noting he’d started with two Blacks.

It was much more entertaining elsewhere, with Vladimir Kramnik continuing his late-career policy of going for complications – almost any complications and almost regardless of the evaluation – rather than taking quiet draws. 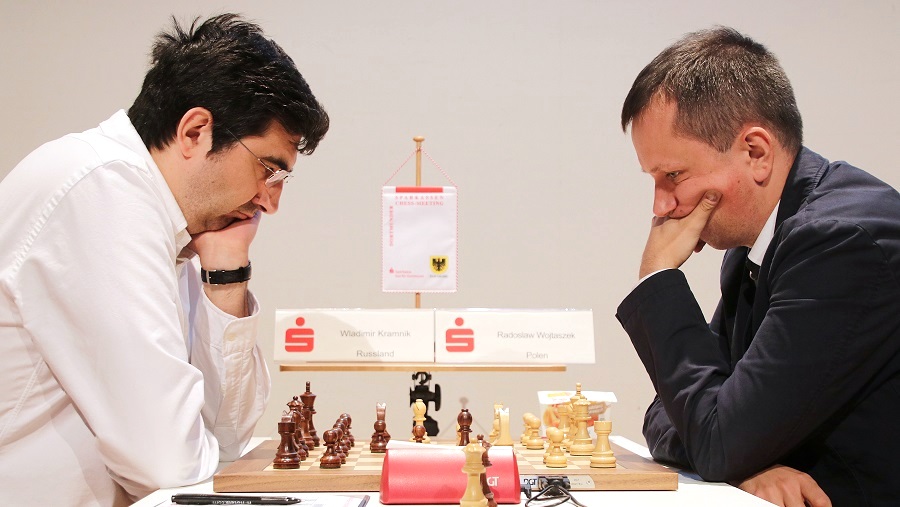 This was the key position:

Kramnik’s choice was worthy of a meme:

After 21…Qxe1+ 22.Qxe1 Bxd3 the menacing d-pawn and the new landscape on the board had the practical benefit of seeing Wojtaszek think for almost 40 minutes over his next two moves, while some of the defending champion’s subsequent decisions weren’t optimum. Nevertheless, Black was never seriously threatening to win, and inaccuracies could easily tip the game in White’s favour. One came on move 39, when instead of playing 39…Kg7 and allowing Radek, down to one minute, to make the automatic replay 40.Qd4+ to reach the time control, Kramnik went for 39…Kh7?!:

That seemed to lure the queen away from stopping the d-pawn, but had the minor flaw that if White "fell into" the trap with 40.Qf8! he would actually be winning - later down the line White needs to boldly march his king up the board, but that’s the kind of thing that could be calculated after the time control.

The d-pawn can now no longer be stopped from queening (if Black decides to do that), with 42.a6 here running into 41…Bd5, but in any case White always has enough to force a draw. In the game 42.Qxc6 Rc2 43.Qe4 Rc3 44.Qd4 Rc2 and so on was a draw by repetition. Even Vladimir reluctantly admitted, “I was happy with the draw in the end.” 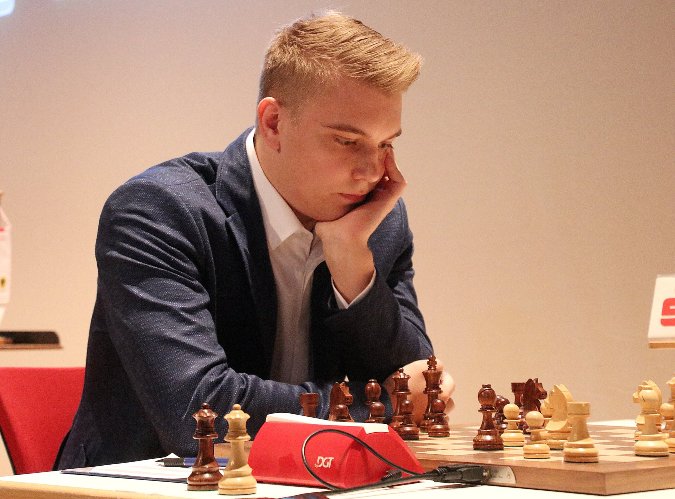 So far so good for Vladislav Kovalev in his first major supertournament | photo: official website

The star moves of the day, however, arguably came from Vladislav Kovalev, who showed that the 3.Bb5+ Sicilian can also have some bite!

This wasn’t a dubious gamble a la Kramnik, though, as became clear when the position simplified to the following position:

Barring a terrible blunder only White can win, but despite the two connected passed pawns tablebases tell us that it’s no more than a draw. In a practical game Black could easily go astray, but in this case Ian Nepomniachtchi also had almost limitless time if he felt the need to calculate anything at any moment – he could have gone and taken a 90-minute nap and returned with half a hour still on his clock, though perhaps the FIDE Ethics Commission would have had something to say about that!

Instead the remaining 30 moves were played relatively quickly by both sides, with no real progress made. That means that after two rounds in Dortmund only Duda is top on 1.5/2, Nisipeanu is bottom on 0.5/2 and all the other players have 50% after two draws. As in recent years, Dortmund has a very relaxed schedule, with the players now taking their first rest day.

The action continues on Tuesday, with Wojtaszek perhaps out for revenge for their Polish Championship game in Duda-Wojtaszek. As you can see, on the other boards the white players are significantly higher rated and will no doubt be gunning for wins. Follow all the action live here on chess24 from around 15:15 CEST!