Ian Nepomniachtchi almost celebrated his 28th birthday in style by beating Anish Giri in Round 1 of the 2018 Sparkassen Chess Meeting in Dortmund, but one false king move at the end allowed Anish to escape with a draw. The other games were also interesting battles, though Vladimir Kramnik quipped “chess is ugly and a draw” after he couldn't convert an extra pawn in a smashed pawn structure against Liviu-Dieter Nisipeanu. Jan-Krzysztof Duda put up the toughest fight, subjecting Vladislav Kovalev to an almost 7-hour ordeal. 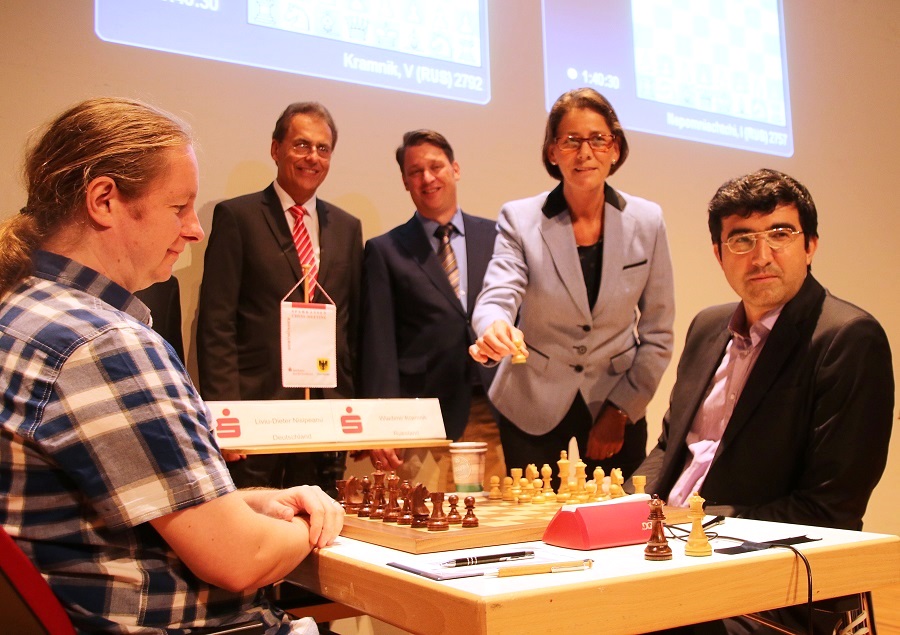 You can replay all the games and the see the pairings for Dortmund 2018 using the selector below:

The long opening ceremony and introductions in the NRW Orchestra Centre on Saturday included singing Happy Birthday to Ian Nepomniachtchi, who had just turned 28. He’d said on the eve of the tournament that he wasn’t expecting any gifts from a player as strong as Anish Giri, but in the end he almost got one. 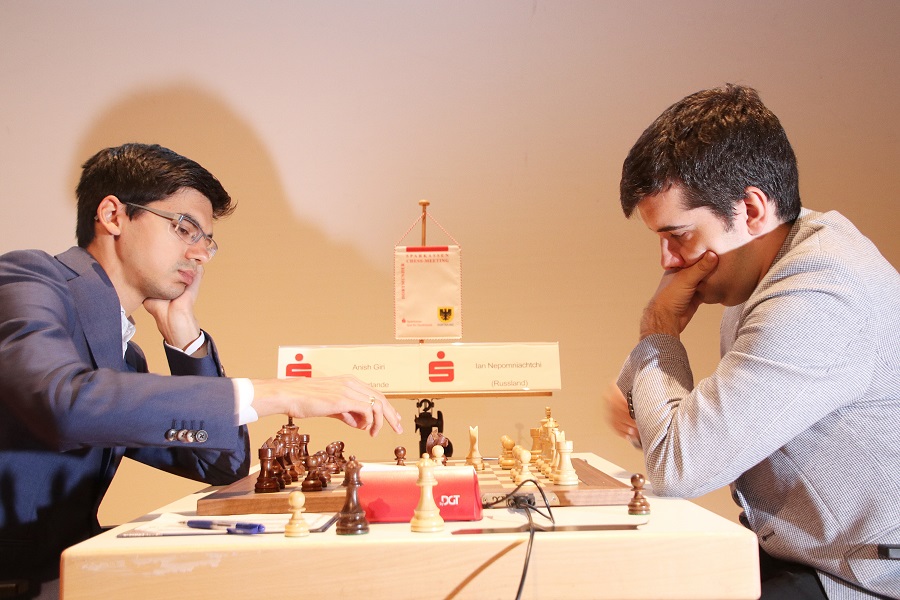 The Petroff Defence revival at top level continued, with Nepo playing an older system without opposite-side castling but then spicing things up by pushing his h-pawn and lining his queen up against a black rook on the e-file. The provocation was enough to see Anish spend well over an hour on the doubtful plan of launching his b-pawn from b7 to b4:

Here the computer suggests going for the kill immediately with 19.Bxh6! and after 19…gxh6 20.Qxh6 Bf8 21.Qg5+ Kh8 22.Ng4! Black will be fighting to survive. Nepo’s 19.Qg3 was also a decent move, though, with Giri soon jettisoning a pawn to release the tension. Objectively it seems he was right and should have been able to hold a draw in the queen ending, but when he took the time out to gobble up the a-pawn he gave his opponent a chance to get a big opening-day win:

50…Qc6! was just in time to save the day, so Nepo’s birthday ended with a familiar chess meme instead (his dining companion is his second Vladimir Potkin):

As they say, the good company and good food are the most important things in life :)

“Chess is ugly and a draw” – Vladimir Kramnik 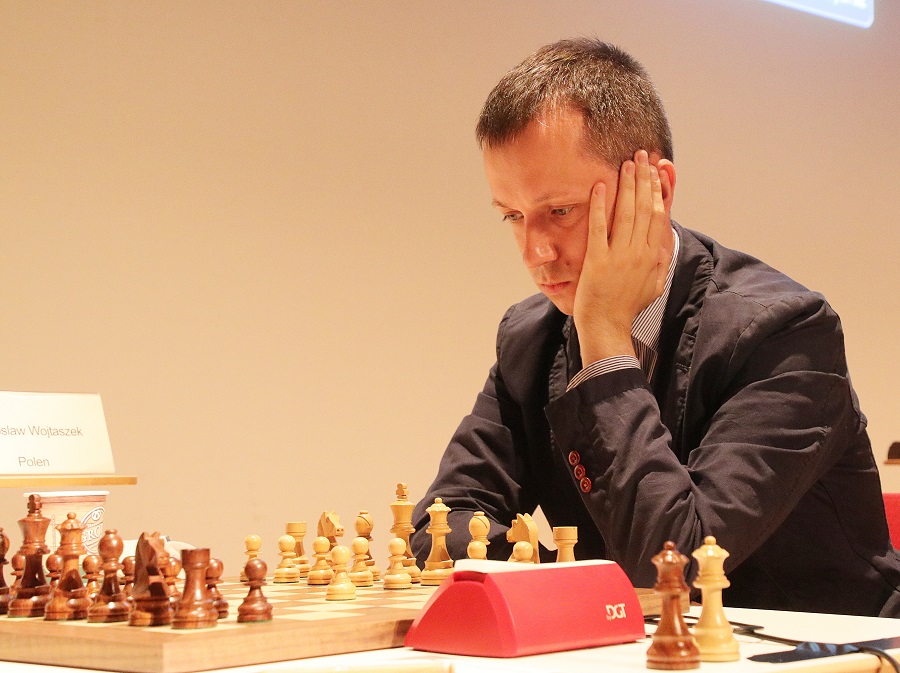 The other three games all featured interesting battles, with even the quickest of them, Wojtaszek-Meier, starting out with an opening surprise... or actually two. The first was that Georg Meier spent over 5 minutes deciding to respond to 1.c4 with 1…b6, but after that things went the way he wanted and he got in the second surprise 6…e5!, that had only been played in Christiansen-Speelman, Hastings 1978 until it was tried in a relatively unknown rapid game earlier this year:

Defending Champion Wojtaszek spent 10 minutes deciding not to go for the “principled” 7.a3, as seen in both those games, but the more modest 7.Ne2. The game fizzled out into a draw by repetition on move 31.

Kramnik-Nisipeanu was noteworthy for following the novelty Magnus Carlsen had used to crush Kramnik in Round 7 of Norway Chess 2016:

Kramnik was plunged into thought after Carlsen retreated his knight from c3 to e2 | photo: Fiona Steil-Antoni

This time it was Kramnik on the white side, but Nisipeanu had come prepared and didn’t play the 12…Nb6?! seen in Norway but 12…f5. It was still far from obvious that the ensuing position was one you want to have against a player of the technical skill of the former World Champion, however.

With Kramnik launching the famous “minority attack” on the queenside, Nisipeanu decided it was time to take decisive measures on the kingside and sacrifice a pawn with 18…f4!? 19.Nxf4 Nxf4 20.exf4. 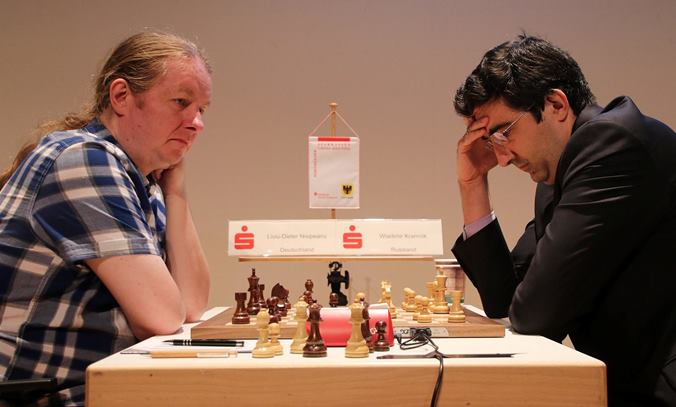 Kramnik must be sick of the sight of this variation from either side | photo: official website

He put his king on f6 and challenged Vladimir to break down his fortress. The Russian did all he could, with one of the final tricks an attempt to sacrifice back the f-pawn:

41…Kxf5 Re7! is a simple win for White, but chess isn’t checkers and Nisipeanu left the f-pawn untouched and a draw by repetition followed shortly afterwards. Kramnik summed up:


I should have tried something more ambitious. Chess is ugly and a draw! 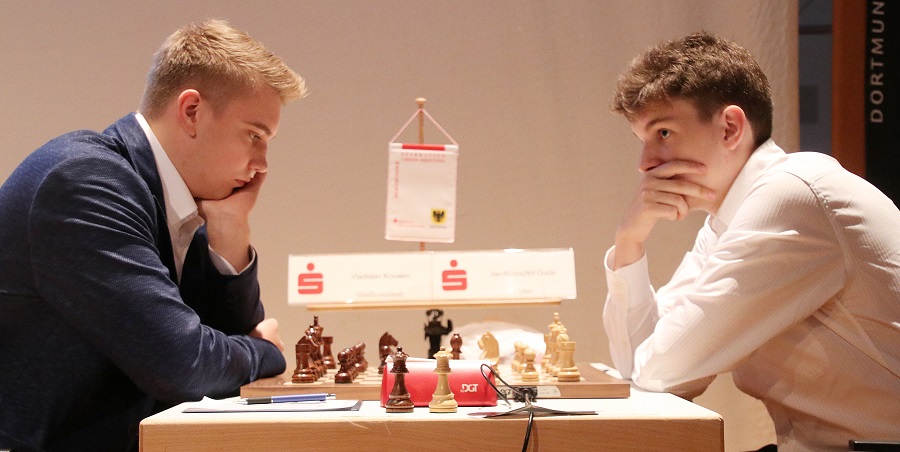 Both Kovalev and Duda have a lot to prove | photo: official website

The biggest unknown quantities in Dortmund are 20-year-old Jan-Krzysztof Duda from Poland and 24-year-old qualifier from Belarus Vladislav Kovalev. They met in Round 1, and despite being surprised in the opening it was the world’s top junior who pressed for almost seven hours. He gradually built up a significant positional edge. Here, for instance, is the position after 47…Ra5:

White has open and half-open files for his rooks, a perfect knight, a better pawn structure and a juicy target on d5. How can he break through, though? That was a question Duda could never quite answer in a game that lasted 72 moves. One interesting computer suggestion here is 48.Rbb1!? in order to break open the position and finally win the d5-pawn after 48…Rxa3 49.Ra1! and invading on a7 – though again, Black wouldn’t be forced to capture the pawn and the fortress might still have held. 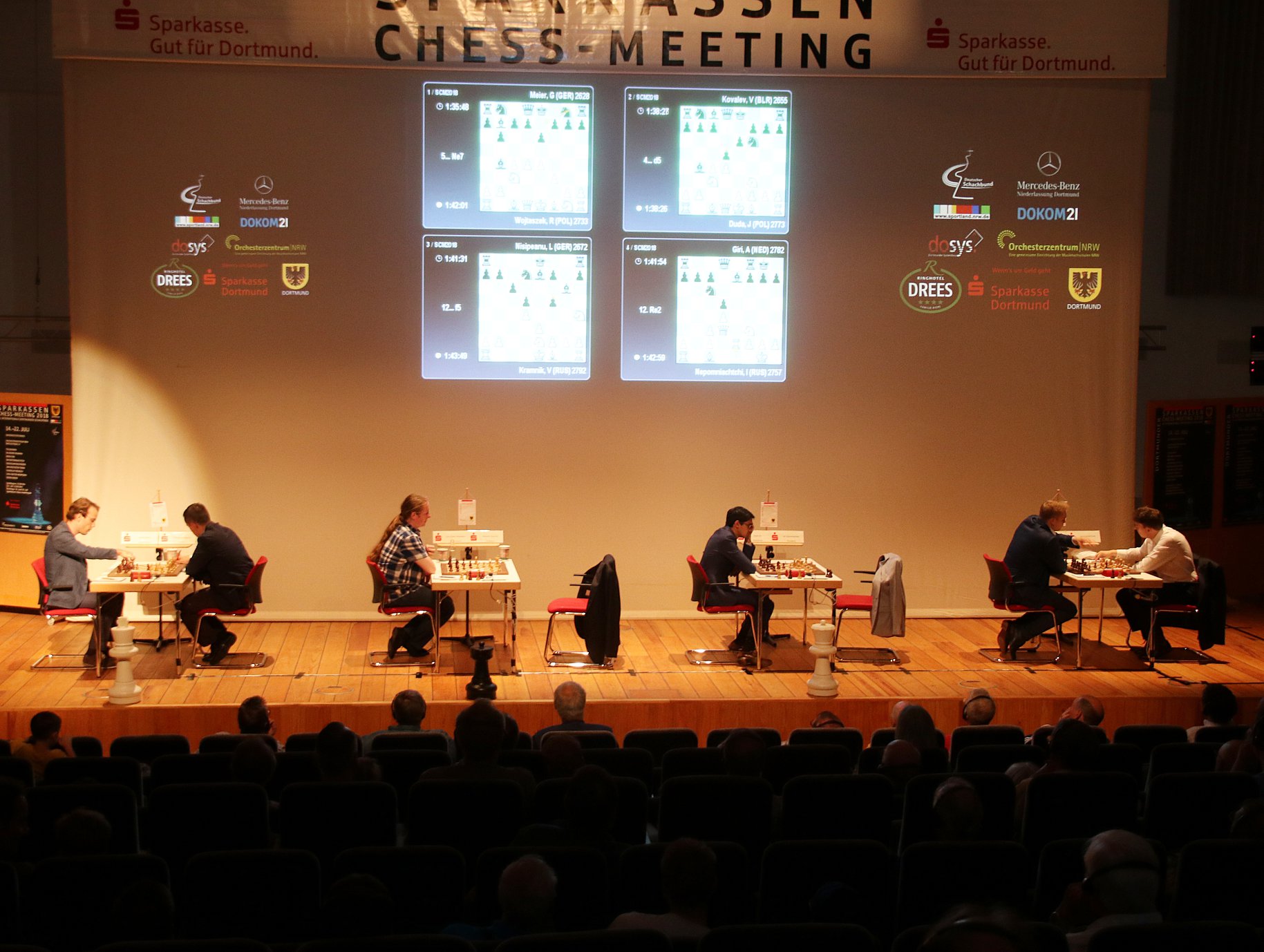 Dortmund remains true to the tradition of playing chess on a big stage | photo: official website

So the four players with Black could be satisfied with the outcome of the first day. Three of them now have White in Round 2 – Meier-Giri, Kovalev-Nepomniachtchi and Nisipeanu-Duda, while Wojtaszek-Kramnik, the defending champion vs. the favourite, is potentially a big game for the overall outcome.

Follow all the action live here on chess24 from around 15:15 CEST!