Leinier Dominguez beat Levon Aronian in the final round to clinch victory in the Champions Showdown: Chess9LX in Saint Louis. 58-year-old Garry Kasparov had gone into that round in a 4-way tie for 1st place, but dropped to 5th after losing to Maxime Vachier-Lagrave and couldn’t shake off regret at taking a draw in a better position against Hikaru Nakamura in the previous round. MVL shared 2nd place with Sam Shankland and Wesley So, with Wesley the only player to score more than a single win on the final day. 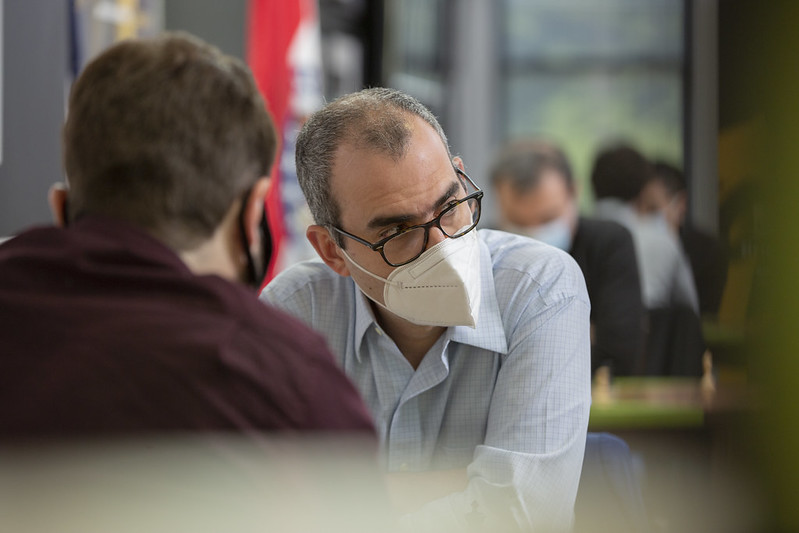 You can replay all the games from the 2021 edition of Chess 9LX using the selector below.

“Maybe I have a chance — maybe it’s my swan song,” was a thought that went through the head of 13th World Champion Garry Kasparov one round into the final day of Chess9LX, but by the time it was over there was frustration at finishing “only” 5th.

A final round loss had spoilt what had otherwise been a great event for Garry.

The day began perfectly against multiple Chess960 World Champion Peter Svidler, who had a nightmare tournament. 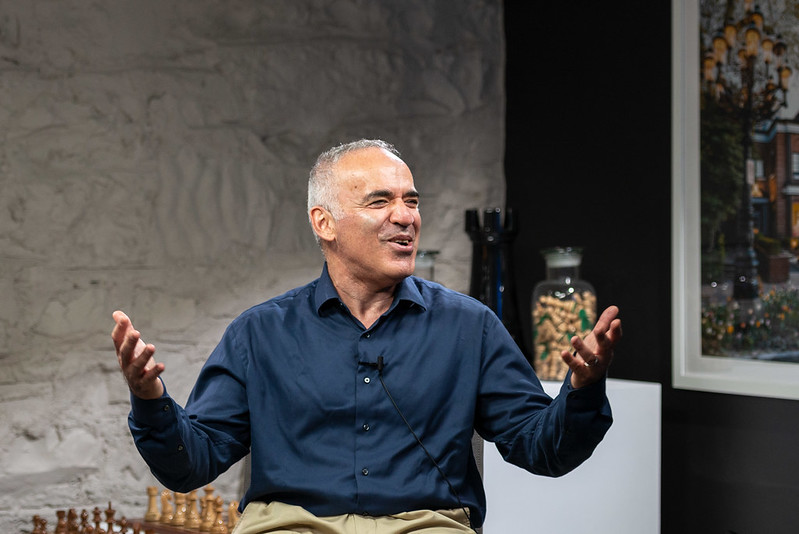 Even if things didn't quite work out for Garry Kasparov he'd made the disaster in Zagreb a distant memory | photo: Crystal Fuller, Saint Louis Chess Club

Garry could have played a winning sacrifice on c4 on move 19, while 20.Qd2? just made it even more enticing by putting the queen in the firing line.

When the dust of the round had settled Garry was tied for 1st place.

He was still tied for 1st place going into the final round of the day, but this time it was a case of what might have been, since Garry took a draw by repetition in a position where he was pressing against Hikaru Nakamura.

There’s no immediate killer blow, but the computer suggests if White can exchange off a pair of rooks and prepare f4, for instance with Ne2, he has excellent chances, with the d5-square a huge asset for White.

This was the game Garry regretted afterwards, with his reasons for going for the draw absolutely understandable for almost anyone who plays chess, but not the kind of thing you expected to hear cross the lips of the Beast from Baku.

Garry said he wanted to preserve some energy for the final round against Maxime Vachier-Lagrave, after having struggled in the 3rd game on previous days. 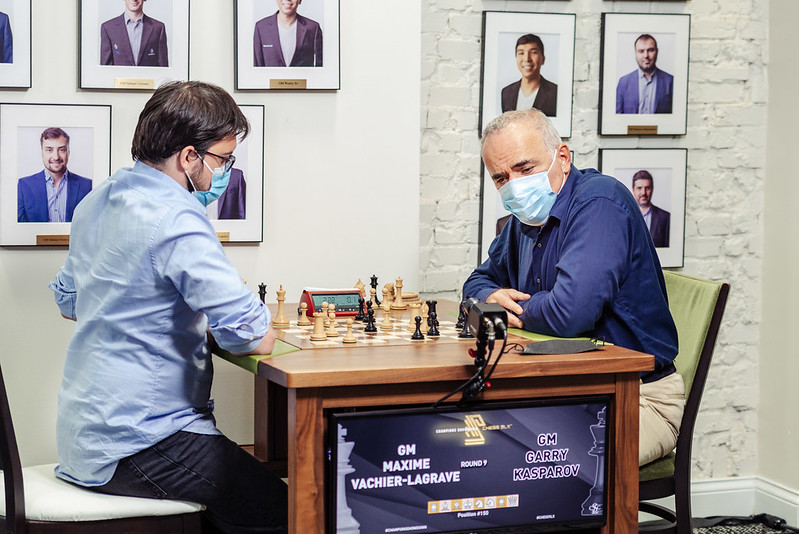 He would have forced a playoff with a win, but instead he missed some chances (14…a5! instead of 15…b5 was pointed out by Maxime after the game) and then lost the thread on move 17.

As on Day 1, when he’d drawn a totally winning position against Wesley So in Game 2 and then crashed against Shakhriyar Mamedyarov, Garry couldn’t clear his head:

I was still thinking, how could I not take my chance against Nakamura?

Garry vowed to be back, however, if only for the next edition of Chess9XL, commenting, “960 suits me much better because I don’t have to spend time repeating something”.

Chess960 is a little different…

And he could see some advantages to not having won an unlikely title.

It would be bad for me winning. As my wife said, Garry, you’re an amateur, you cannot win such a tournament, because otherwise these guys could get crazy — it’s wrong!

He ended by commenting, “Who could have imagined that in Round 1 I played the winner of the tournament?”

He was referring to Leinier Dominguez, against whom Garry had applied some pressure before that Round 1 game ended in a draw.

“It’s been a long time since I won a tournament this strong,” said world no. 12 Leinier Dominguez after taking the $37,500 top prize, and he’d pulled off his triumph in his new home city.

It’s also nice to win here in Saint Louis, and of course with this super strong field. I came close a couple of times before. The US Championship in 2019 I was second, and then in the Sinquefield Cup I was also leading at some point, but finally came second, so to be able to finally win a tournament it’s really, really great.

It hadn’t been easy, with Leinier starting the final day with a loss that brought an end to his 4-game winning streak and saw him lose the sole lead.

The loss came against Sam Shankland, where a good position suddenly went wrong for Leinier, with Sam able to use some nice chessboard geometry. 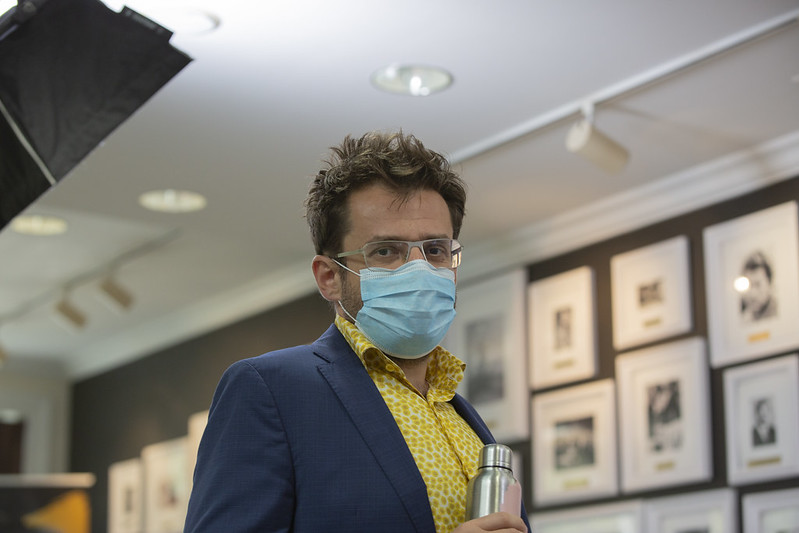 Leinier’s next game, a draw against MVL, was all about stabilising after that loss, before he went into the final round tied on 5/8 with Shankland, So and Kasparov. All four had the black pieces, but in the end it was only Leinier who picked up a win, with an impressive victory over the most recent arrival as a Saint Louis resident, Levon Aronian. Lev’s 20.b4? was over-optimistic.

There was no need for the knight to go backwards, and there was no way to trap it, as it began a marauding career in the enemy camp that only ended on move 48. By then there was already no stopping Leinier.

The final standings look as follows — you can click on a result to open that game, or hover over a player's name to see all their games.

Chess960 World Champion Wesley So deserves a mention as the only player to have scored two wins on the final day, defeating Fabiano Caruana and Peter Svidler. Wesley had chances in the final round against Hikaru Nakamura, but let most of his advantage slip when he swapped off queens.

It was a shockingly bad event for Hikaru, but on the final day he thwarted no less than three players battling for 1st place — as well as draws against Garry and Wesley, he saved a lost position against MVL! 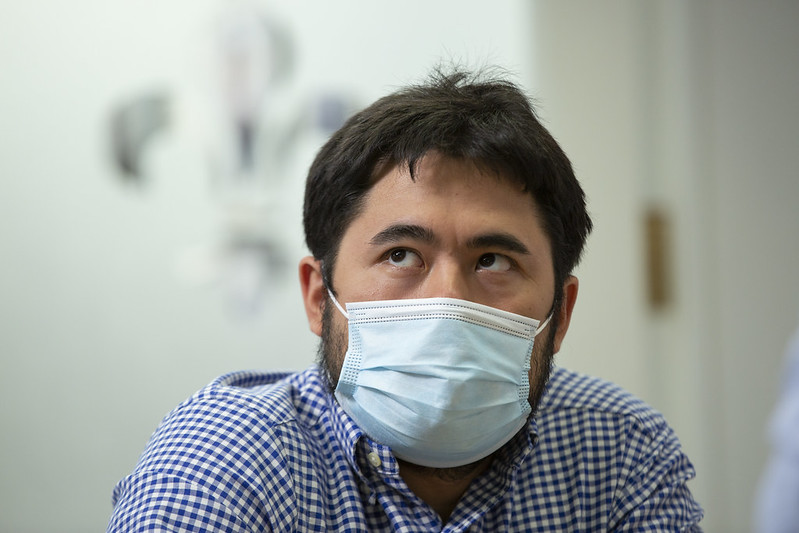 Hikaru has finished near the bottom on a few occasions in the Sinquefield Cup in Saint Louis, but to see him suffer like this in a rapid event was a shock | photo: Bryan Adams, Saint Louis Chess Club

The next big event for Leinier Dominguez will be the US Championship that starts on October 6th in Saint Louis. Hikaru Nakamura doesn’t play, and Levon Aronian isn’t yet eligible, but Fabiano Caruana, Wesley So, Jeffery Xiong and Sam Shankland will be Leinier’s key rivals. Is he going to win?

Well, that’s the plan! Let’s see how it goes.