Ding Liren: I'm buying my ticket to the Candidates!

Chinese star Ding Liren has revealed he's booked his ticket to the Candidates and is ready to fight for the right to challenge for the world title.

Speaking publicly for the first time about his epic race against time to be eligible, the newly-installed world no. 2 said the experience has spurred him on to play the best chess of his life.

In an exclusive interview with Kaja Snare, the Meltwater Champions Chess Tour commentator, Ding said the gruelling run of classical games that saw him play 28 in a month seemed "very, very long".

"The first games I remember were played on March 27th," he added. "I had to play each player four times and the tournament was organised for me, so I could have enough games to be in the possible squad for the Candidates. The other players were all very young and they were all born in 1999 and they are the future of Chinese chess.

I think I played my best chess in this period of time. Although my opponents' rating points were around 200 points below me, to beat them and to maintain the rating is not so easy.

"Especially in the first tournament I was very worried about losing a lot of rating [points] so that I could not take the place and be overtaken by the other players. Finally, I think I played very well, especially after a long time in lockdown. I didn't play many over the board tournaments, so the results were a surprise to me."

Entry suddenly became possible for Ding when the Russian grandmaster Sergey Karjakin lost his place after being suspended by FIDE following a series of controversial public statements on his country's war with Ukraine.

Ding, as the highest-rated player not already qualifed, was first in line to replace Karjakin. But having been largely inactive during the covid lockdowns, Ding was short of the required 30 FIDE-rated classical games played in a year needed to be eligible.

In March and April a series of tournaments were hastily organised in China for his benefit. With four games already played in December, Ding eventually made it onto the May rating list with 32 in total.

Ding's place was all but confirmed when Karjakin’s appeal against his 6-month ban from chess was rejected by FIDE. The World Chess Federation has since also included Ding in its promotion for the event, suggesting it is sure Ding will play.

Karjakin has appealed to the Court of Arbitration for Sport, meaning there is a small chance it will not happen. However, CAS is not expected to rule in time to affect the event.

Asked whether he has officially been invited to the Candidates, Ding said: "Yes, I am applying for the visa and buying the tickets now, but it's not 100 per cent sure. If Karjakin has applied for CAS then I may lose the spot." 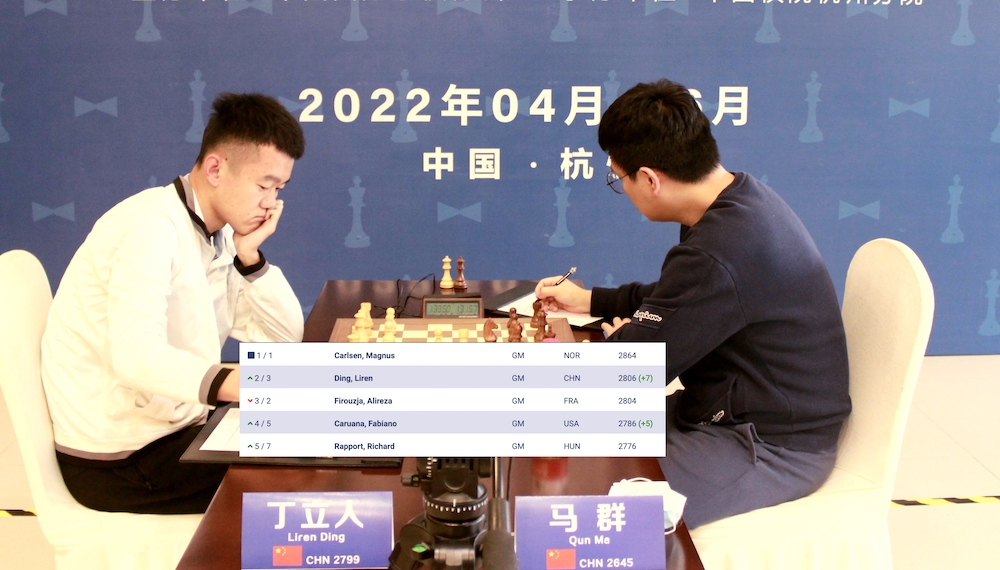 Ding's run also gained him 7 rating points which took him above 18-year-old Alireza Firouzja into the world no. 2 spot on the May 2022 FIDE rating list. Ding's FIDE rating is now 2806, but there is a big gap to World Champion Magnus Carlsen on 2864.

Ding is currently appearing in the Chessable Masters, his first event since the marathon run, but he is not expecting to get much rest before the opening ceremony of the Candidates in Madrid on June 16.

Three-time British champ David Howell said: "That's a lot of chess! Imagine each game is four hours, against grandmaster opposition every single time. It's intense, and he did well. He moved back up to world no.2.

He definitely can't say he's rusty now going back into next month's Candidates Tournament. I think, just on the back of his recent results, Ding has to be one of the favourites to qualify and challenge Magnus. I'm impressed he's playing here, I'm grateful, because he's such a great player and we want to see his games. But his coaches have to make sure he's got time for rest at some point and time to make sure his body clock is all correct.

"The Candidates in June, that will be in Madrid, so he'll have to start to shift his sleeping pattern anyway and that's part of being a sportsman, but he can do it, and if he does I think he has got all the tools to win that event."

Pending full confirmation, Ding is due to start in the Candidates with White against Ian Nepomniachtchi on June 17 (check out the full pairings).