The interest in Magnus Carlsen’s match against Fabiano Caruana is so great that it’s tough for other chess events to compete, though we have a number that would otherwise have gained top billing. The Shenzhen Masters has stolen some limelight as Ding Liren grew his unbeaten streak to 100 games, but that’s where it was ended by MVL in an insane game! In Kolkata, Hikaru Nakamura has won the rapid section of one of India’s first ever supertournaments, while the Women’s World Championship has reached the quarterfinals with the favourites winning when it mattered.

Chinese no. 1 Ding Liren has proven the saviour of what has otherwise been a somewhat soporific tournament in Shenzhen, China. You could forgive all draws in the first four rounds as during that time Ding Liren matched and then surpassed Mikhail Tal’s 95-game unbeaten streak. He then even won a game to take the lead with Yu Yangyi going into the rest day. Three more draws in Round 6 saw him hit 100 games unbeaten, before it all finally ended in Round 7. 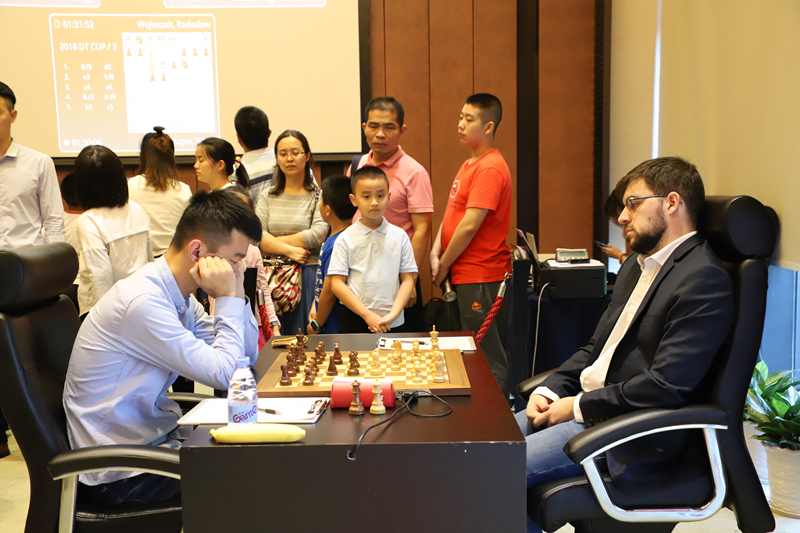 Maxime Vachier-Lagrave recently had a 67-game unbeaten streak of his own - in this game he ended Ding Liren's streak on move 100! | photo: qipai.org.cn

Maxime Vachier-Lagrave was the executioner, but despite a fine exchange sacrifice and building up a crushing position it looked as though this might prove another game in which Ding Liren’s tactical talent enabled him to escape. A +3 advantage for the Frenchman fell to around +1, but in the run-up to the time control the Chinese star finally cracked with 38…Qe7? (38…Rf8!)

39.Qa1! left the f6-knight too pinned to escape, and although Liren fought on valiantly he couldn’t stop the streak finally ending:

It was a dramatic round as we also got a decisive result in another game: 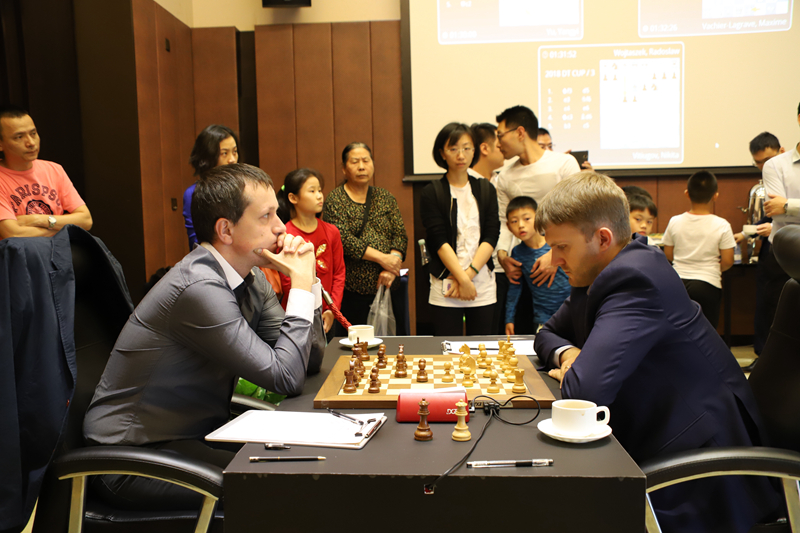 It may have been a relief for Ding Liren that he no longer had to worry about the streak, since in Game 8 he won a nice technical effort against compatriot Yu Yangyi to join MVL in the lead! The following table will update with future results, and you can also click any result to open that game with computer analysis: 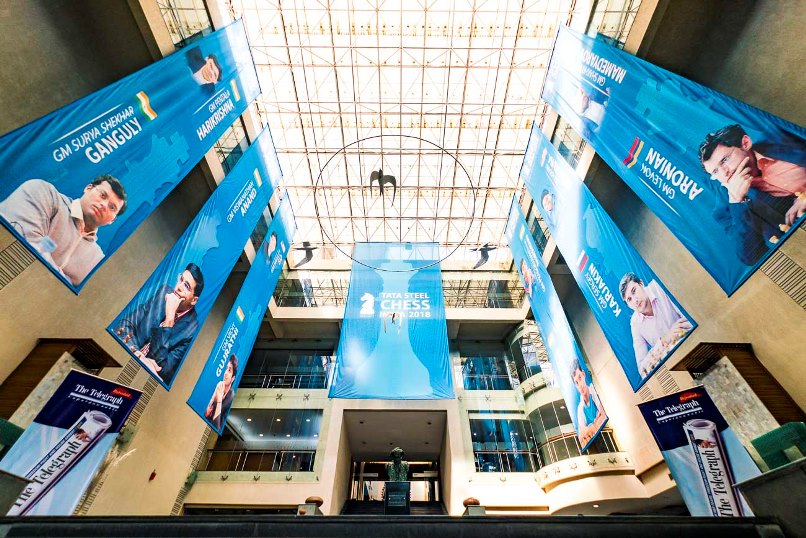 Despite India growing into a hotbed of chess talent, it’s been a very long time since we’ve seen a major chess event held in that country of 1.3 billion people. Vishy Anand remarked at the opening ceremony that this is what they’ve needed:

It was wonderful to see some of the world’s best players in a very new location:

On the chessboard some things were no huge surprise, including Hikaru Nakamura showing his mastery of the format with a fine second day: 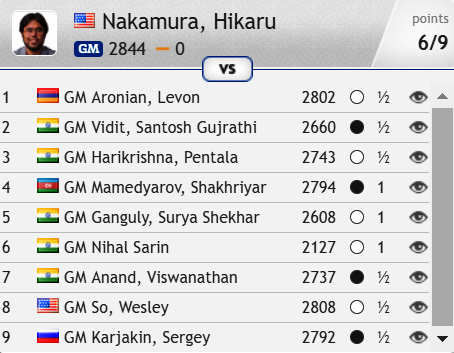 When you look at the crosstable, though (again, click on any game to open it with computer analysis), you do see some surprises: 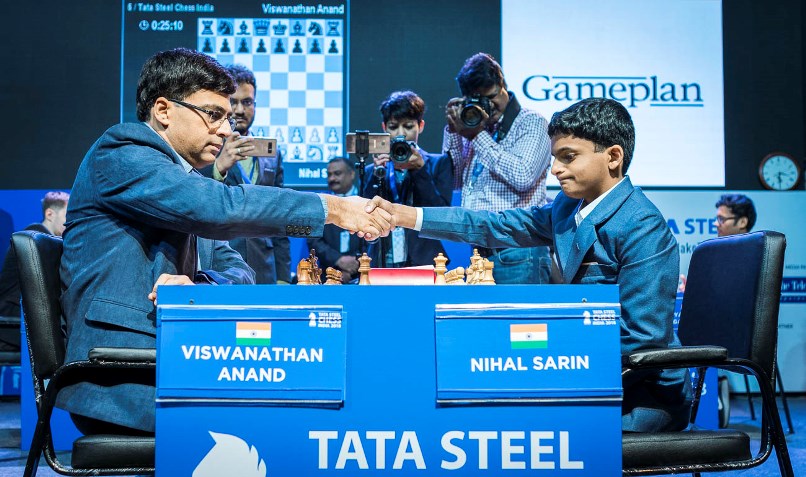 14-year-old Nihal Sarin got the chance to play against... and draw against... his idol. Praggnanandhaa will play in the blitz | photo: Lennart Ootes, Tata Steel Chess India

For instance, Vishy Anand failed to win a game back home in India, and in fact lost a game to the bottom-placed player, one who once used to work the demonstration boards while Vishy was in action!

There’s still time for Vishy to show what he’s made of, though, as 18 rounds of blitz action follow on Tuesday and Wednesday. The pairings for that are out: 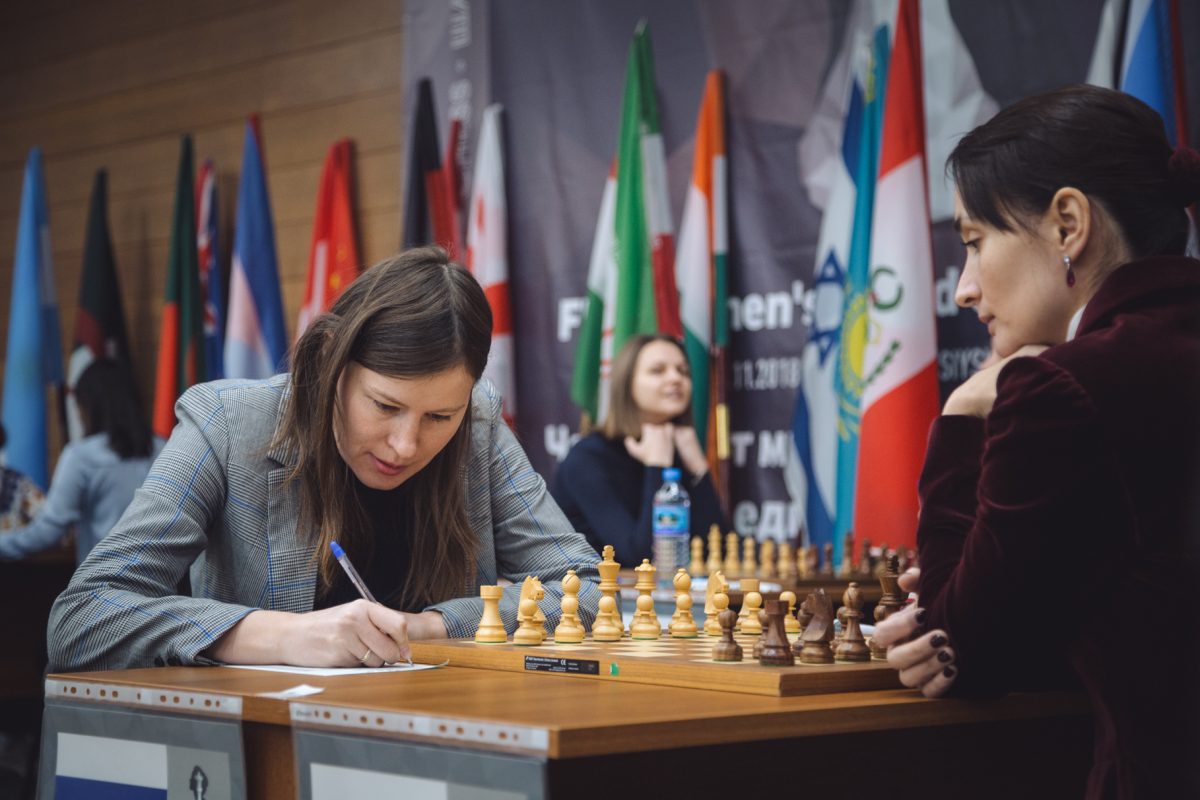 Kateryna Lagno's Armageddon victory over Natalia Pogonina was the longest match of Round 3 | photo: ugra2018.fide.com

The Women’s World Championship in Khanty-Mansiysk had been all about upsets in the first two rounds, but in Round 3 the only match that didn’t go according to rating was 19-year-old Gulrukhbegim Tokhirjonova (2435) from Uzbekistan beating Valentina Gunina (2497) from Russia 3:1. Chinese Champion Zhai Mo finally lost to the Chinese no. 1, top seed and Women’s World Champion Ju Wenjun, while 18-year-old Iranian Mobina Alinasab’s chances of another act of giant-killing faded when she missed a win in the first game against Mariya Muzychuk:

Most moves wins for Mobina, but not the one she chose – 49.h7?, and with 49…Qh1+ Mariya was able to start giving perpetual checks and force a draw. 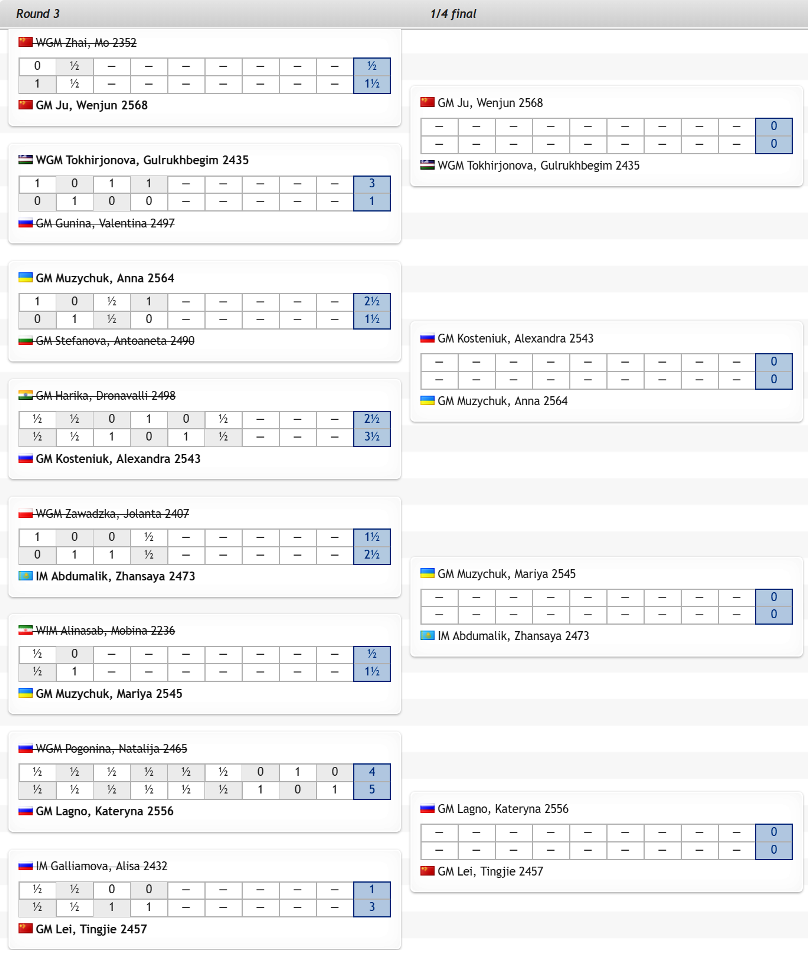 As you can see, we finally had a match go all the way – with Kateryna Lagno ousting compatriot Natalia Pogonina in a dramatic Armageddon game where Black was at first better but White eventually won the day!

Follow all the action on our Live Tournaments page.