Croatia GCT 10: Nothing to see here

Magnus Carlsen still leads Wesley So by half a point going into the final round of the 2019 Croatia Grand Chess Tour after their head-to-head clash was an instantly forgettable draw. It seemed as though the other players took their cue from that game as Ding-Aronian, MVL-Nepomniachtchi, Giri-Nakamura and Anand-Karjakin all ended just as uneventfully. Only Fabiano Caruana and Shakhriyar Mamedyarov made a valiant attempt to play for something, but apart from featuring a rare high-level outing for the Scandinavian it was also far from a classic. 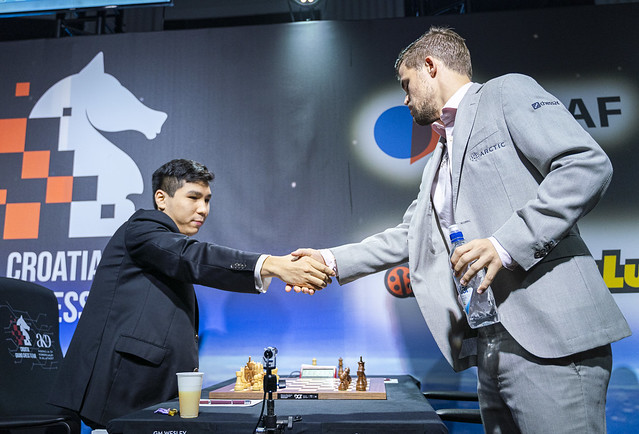 Wesley So wasn't in the mood to go down in a blaze of glory | photo: Lennart Ootes, Grand Chess Tour

You can replay all the games from the 2019 Croatia Grand Chess Tour using the selector below:

All eyes were of course on So-Carlsen, a game that held the tournament outcome in the balance. A win for Magnus and he’d win the event with a round to spare, while if Wesley could win he’d suddenly become the favourite to score a famous victory in one of the strongest supertournaments of all time. Perhaps inevitably, the game was an anti-climax.

The opening was at least amusing, since in our report on last year’s Round 11 in Wijk aan Zee we chronicled an opening failure for Magnus against his then co-leader Shakhriyar Mamedyarov. He commented on a line of the 4.Qc2 Nimzo-Indian that his team had “solved”:

I spent like 17 minutes trying to recall what to do there and then I just had to realise that I don’t remember and I’m going to be a bit worse!

Fast forward 18 months and it was déjà vu all over again!

I wasn’t particularly thrilled about the opening because I’d faced this exact line before against Mamedyarov in Wijk aan Zee last year. That time I knew that my team had fixed this line but I didn’t remember the solution and I played something else, I got into some slight trouble, but I made a draw anyway. I checked it after the game and then I haven’t checked it for a long time, so even today I didn’t remember, so I had to just make it up again.

In Wijk aan Zee Magnus went for 14…Nd5 15.Ne5 Bd7 (as we noted back then, Jan gives 15…Ndb4 in his video series). This time Magnus spent just 4 minutes to decide on the immediate 14…Bd7, but after that the game swiftly headed towards a draw. The players were so intent on that outcome they perhaps even missed a trick towards the end:

29.b4 signalled a swift end to the game after 29…Rxd5, but Magnus felt he'd been careless and would have to “at least suffer a little bit” after 29.d6! Ultimately, though, it seemed both players got the result they wanted. Our creative department worked hard on a summary of the game: 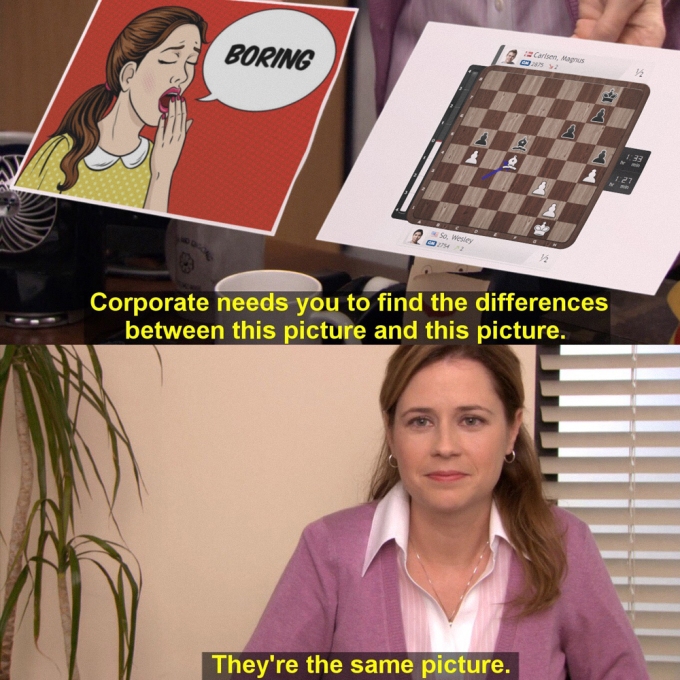 The onus had been on Wesley So, who was trailing by half a point, to play for a win with the white pieces, so that was the topic of the first few post-game interviews. Vishy Anand mounted the first defence:

Of course Wesley had White and he could have pressed more, but he’s coming off a difficult year and he’s having what is really a very good result, tour points, prize money, everything, so I can also understand he didn’t want to take excessive risk today.

Then there was Magnus:

It seemed that Wesley wasn’t going to go all-in, that’s not the way he plays, so he just tried a little bit, and I can understand that. It’s not like it’s only first place that’s worth something here. It’s a qualifier for the final and he’s played an excellent tournament. He thought he’d try a little bit, if I defend well then it’s a draw, and I think that’s more or less what happened.

Essentially there was nothing more that needed to be said, but Wesley couldn’t help protesting much, much too much! In a short interview he came up with a litany of reasons why he hadn’t gone in all guns blazing in the penultimate round:

Watch the post-game interviews with Magnus and Wesley:

While it wasn’t exactly a World Champion’s interview, Wesley has had a great tournament and owed no-one an explanation, especially on a day when peace was infectious. Anand-Karjakin and Giri-Nakamura ended in almost identical opposite-coloured bishop positions:

Ding-Aronian and MVL-Nepomniachtchi saw the players fail to organise opposite-coloured bishop positions but nevertheless draw with a minimum of fuss. That left only Caruana-Mamedyarov, where Shakhriyar Mamedyarov rocked the boat very early on by meeting 1.e4 with 1…d5!?, the Scandinavian Defence. Fabiano saw a chance to move into sole third place and played on, and on, despite the best attempts to discourage him:

It almost backfired when Mamedyarov played 31…Bd3! in a strange messy position: 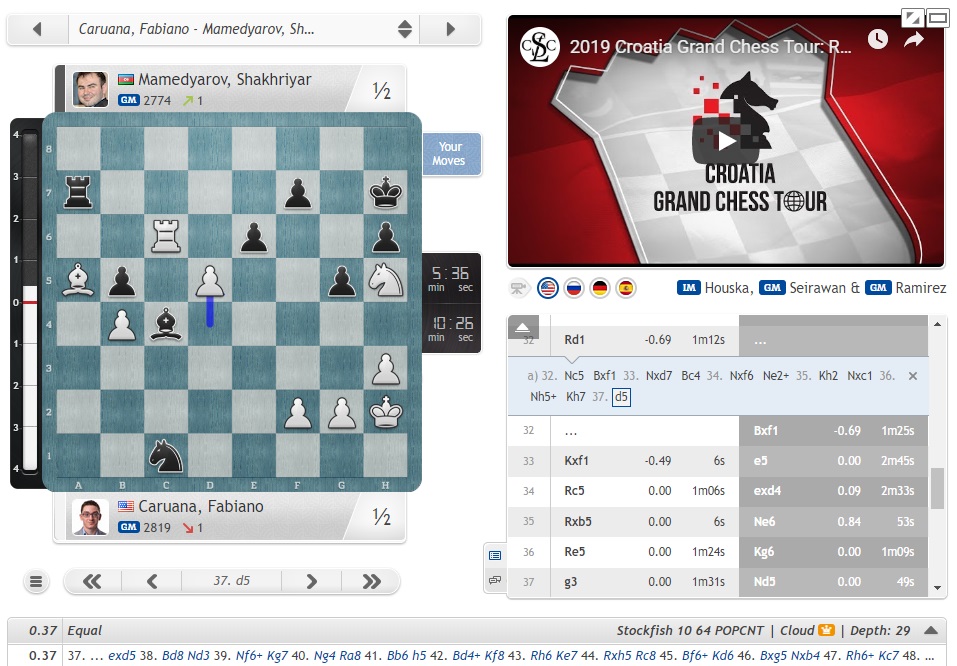 The pin on the c-file forces 37…exd5 and suddenly after 38.Bd8 White’s pieces are threatening to create some kind of mating net around the black king. It was a day on which it never felt like anyone would find such finesses, however, and after 32.Rd1 Bxf1 Black may even have been better, but the game soon fizzled out into a draw. 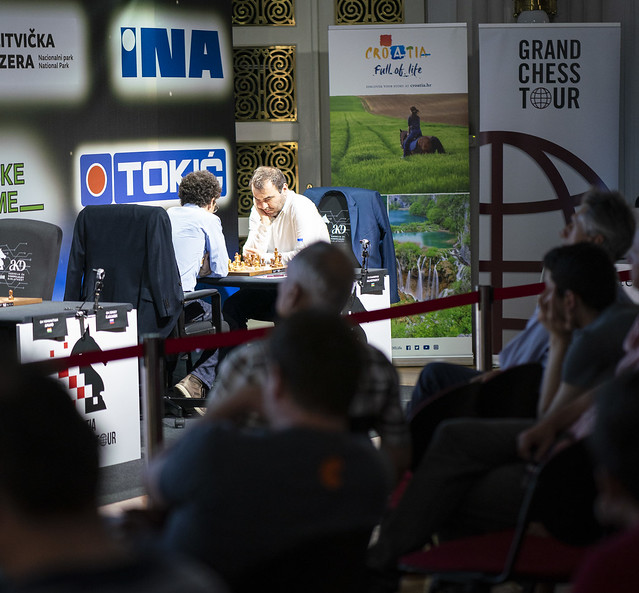 So that left the standings unchanged except for the addition of half a point all round:

The only games that matter for first place in Sunday’s final round are Carlsen vs. MVL and Aronian vs. So, though of course there’s a lot of money and Grand Chess Tour points at stake in the remaining games.

Don’t miss all the action here on chess24, where we’re going to have commentary in English, Russian, German, French and Spanish from 16:30 CEST!