Norway's most infamous bank robber, known as the mastermind behind the biggest heist in the country's history, will join as a guest during TV 2's Tata Steel Chess broadcast. The controversial move has made headlines and provoked strong reactions. Hours after the announcement, one sponsor decided to pull out of the show. 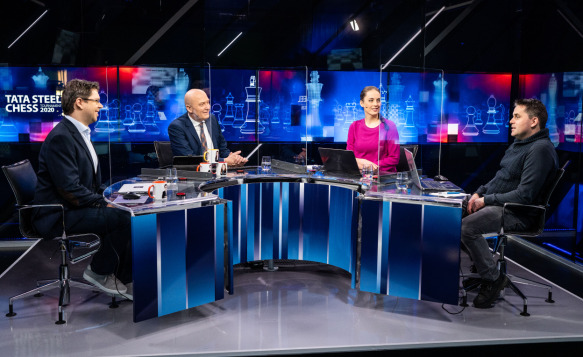 Norwegian TV has a tradition of inviting celebrities as guests during chess broadcasts, but David Toska is clearly the most controversial so far.

Toska was touted as “the mastermind” behind the Nokas bank robbery in Stavanger in 2004, the biggest in Norway's history, where a policeman was killed. After being on the run for a year, he was eventually arrested in Spain. More than 50 million Norwegian kroner (€5 million) has still not been recovered from the heist. Toska served 13 years of a 20-year sentence, was fully released in 2018, and now has a daughter and a full-time job as a programmer.

Toska is a big chess fan and was known to be a talented player in his teenage years. He finished 4th in the Norwegian U14 Championship, before he turned to a life of crime. He got back into chess by following Magnus Carlsen's success while serving time in prison, and shortly after his release he was seen at the venue of the 2019 Fischer Random World Championship in Høvik outside Oslo. He now says he has an online rating of around 2000.

David Toska, when he was wanted by police in 2004

On Monday and Tuesday, he will appear in TV 2's studio for their Tata Steel Chess broadcast, alongside host Fin Gnatt and commentators Heidi Røneid and GM Jon Ludvig Hammer. The controversial signing was announced by TV 2 on Sunday.

After the initiative came from the chess community in Bergen, we spent a considerable amount of time to make a decision that we feel comfortable with. The overall feedback from the people we have been in touch with makes us convinced that this is a positive decision. We have in particular been concerned with the family of Klungland, and their opinion has been of great importance.

Klungland's son says in his statement that he has been in touch with the family and they don't have any objections. “Anything that can help him or the others convicted to return to society is positive.”

While some have seen the move as positive, there has also been a flood of negative reactions on social media. Another victim strongly criticized the move. Erik Håland, a policeman who was at the scene and was shot at by the bank robbers, expresses disgust. He tells VG:

I never stop being surprised at the media bending over for known criminals. Another reason not to watch chess. The fact that his celebrity has come due to serious crimes is in my opinion senseless glorification.

Leif Welhaven, sports commentator for VG, asks whether Toska would have appeared as a chess expert if it had not been for his celebrity status.

If the entertainment value of seeing a Nokas robber in a new role is what made them hire him, it starts to become completely incomprehensible.

Hours after the announcement, one of the sponsors decided to pull out of the show, saying they “don't want to be associated with an incident that is still causing bad memories for many.”

Toska himself says he is prepared for negative reactions.

I hope it will pass and that people can focus on the chess. I think the focus will shift pretty quickly, at least for myself. What should be the focus is what happens in the game, and I hope my story won't disturb that.

Our own commentators Jan Gustafsson and Peter Svidler are somewhat less controversial, and you can follow our Tata Steel Chess broadcast in English from 14:00 CET: Tata Steel Masters | Tata Steel Challengers