Magnus Carlsen and Wesley So lead Jeffery Xiong and Maxime Vachier-Lagrave after Day 1 of the Clutch Chess International, but both could regret not having bigger leads. Magnus raced to 3:0 and was winning Game 4, but he was held to a draw and then lost the first clutch game (worth double the points) and almost lost the second, to lead only by 4.5:3.5. Wesley missed a couple of great chances but still opened up a 5.5:2.5 lead over an out-of-sorts MVL who admitted he’d been dominated in the match. 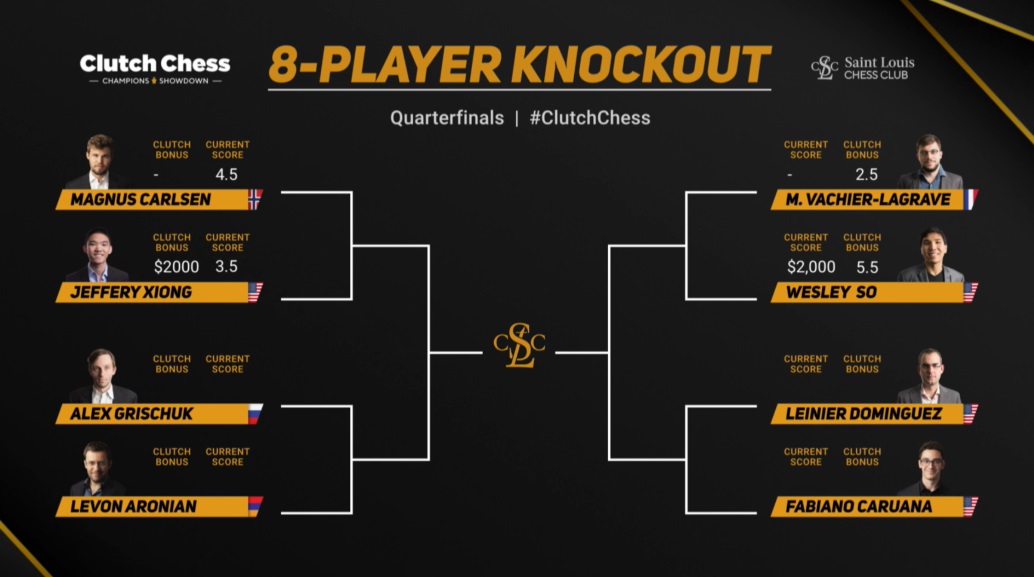 You can replay the Clutch Chess International games using the selector below: 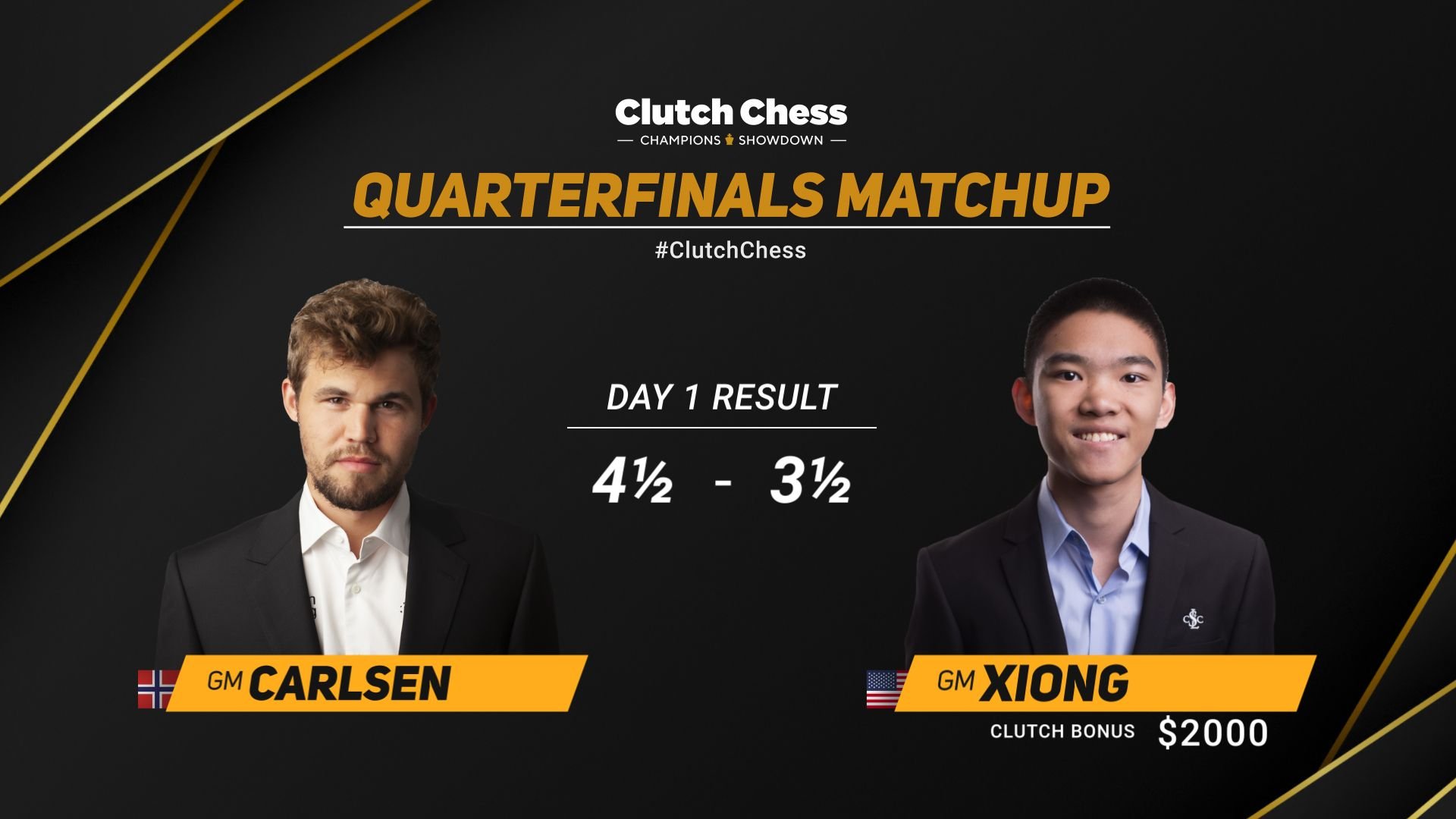 The first game of this match lit up when Jeffery offered a pawn sacrifice on b5 on move 9. Magnus correctly resisted, but two moves later decided the time had come to call the bluff with 12.Nxb5?

The only problem for the World Champion was that it wasn’t a bluff! 12…g5! was an offer that had to be accepted since otherwise g4, winning the f3-bishop, would follow. But after 13.Bxg5 the bishop no longer covers the c7-square, so 13…Nc7! 14.a4 a6 was winning a piece.

Magnus admitted afterwards that he’d just blundered, but he put up a tremendous fight in what remained an incredibly complicated position, at one point even turning down a draw by repetition. The game ultimately turned on the position after move 33:

…the World Champion opened with a win. 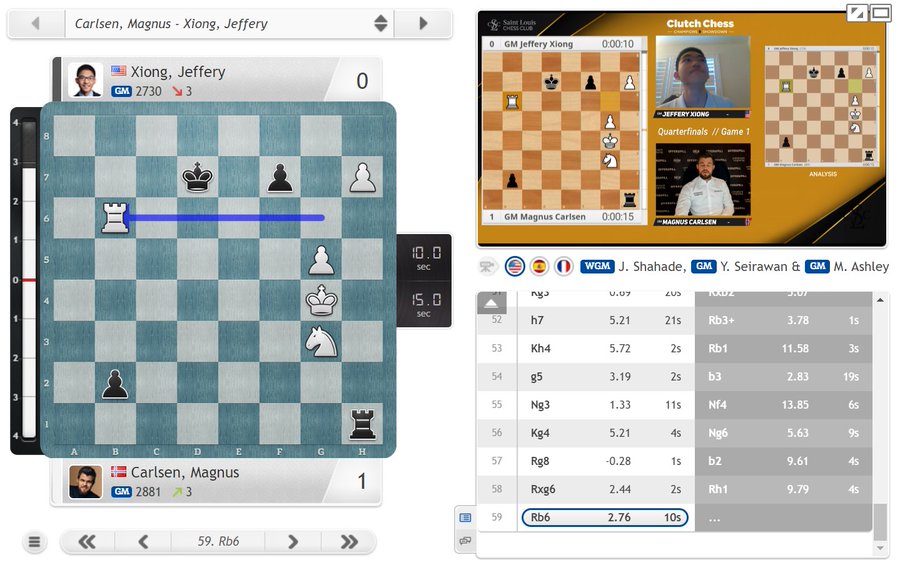 Jeffery had played the losing move with just 5 seconds left on his clock, and afterwards said time was a big factor:

I still fought in the first two games, but he kind of kept the pressure on and when I got low on time he’s just much better.

In Game 2 Jeffery again found some nice tactics early on.

The point was that 12…Bxd2 was met by 13.Nd6!, but it turned out no real damage had been inflicted on Black and ultimately Magnus went on to grind out an endgame win in trademark fashion.

Game 3 was the high point for the World Champion, as Magnus smoothly crushed his opponent with the white pieces. Here’s just a fragment:

It seemed we were heading for 4/4 for Magnus when he seized the initiative with the black pieces in the next game, but Jeffery managed to escape:

Game 4 was extremely critical because I was on the ropes again and usually he converts these 90% of the time. If I’d lost that it would be a question of whether it would be a whitewash.

Instead Jeffery went into the two “clutch” games – where there were 2 points for a win as well as a $2,000 cash bonus – with the initiative on his side. Magnus later self-censored his feelings about Game 4 onwards:

The last 3 games were a bit of a shi… I shouldn't say that! Weren’t great.

Although he had a 3.5:0.5 lead it was theoretically possible for the last two games to give Jeffery the lead, and it almost came to pass! A mistake on move 20 condemned Magnus to an ugly position with the white pieces and, despite facing stern resistance, Jeffery managed to convert it into a full point – or in this case 2 points:

How was Magnus feeling?

Things didn’t improve for him in the second game:


That was pretty stupid… At some point I realised that I was getting outplayed, so I started making strange moves and just made everything a lot worse… I thought I was just completely fine from the opening and then I was even thinking of going for a win, and then it went downhill.

He was slouching in his chair as dark clouds loomed over his position:

But after 23…Kc7 Magnus was very relieved to see 24.fxe5? not 24.Bc5! or other moves that kept the pressure on Black. 28…b6! was a nice move to force liquidation into an ending that was easy to hold:

The second day of the quarterfinal will be Monday, with Jeffery of course still in contention just 1 point behind. Magnus summed up:

I was getting a bit tired towards the end and he was playing a lot better than he was before, so credit to him for stepping up his game. I’ve got to be a lot better in the next half of the match, and it should be fine. 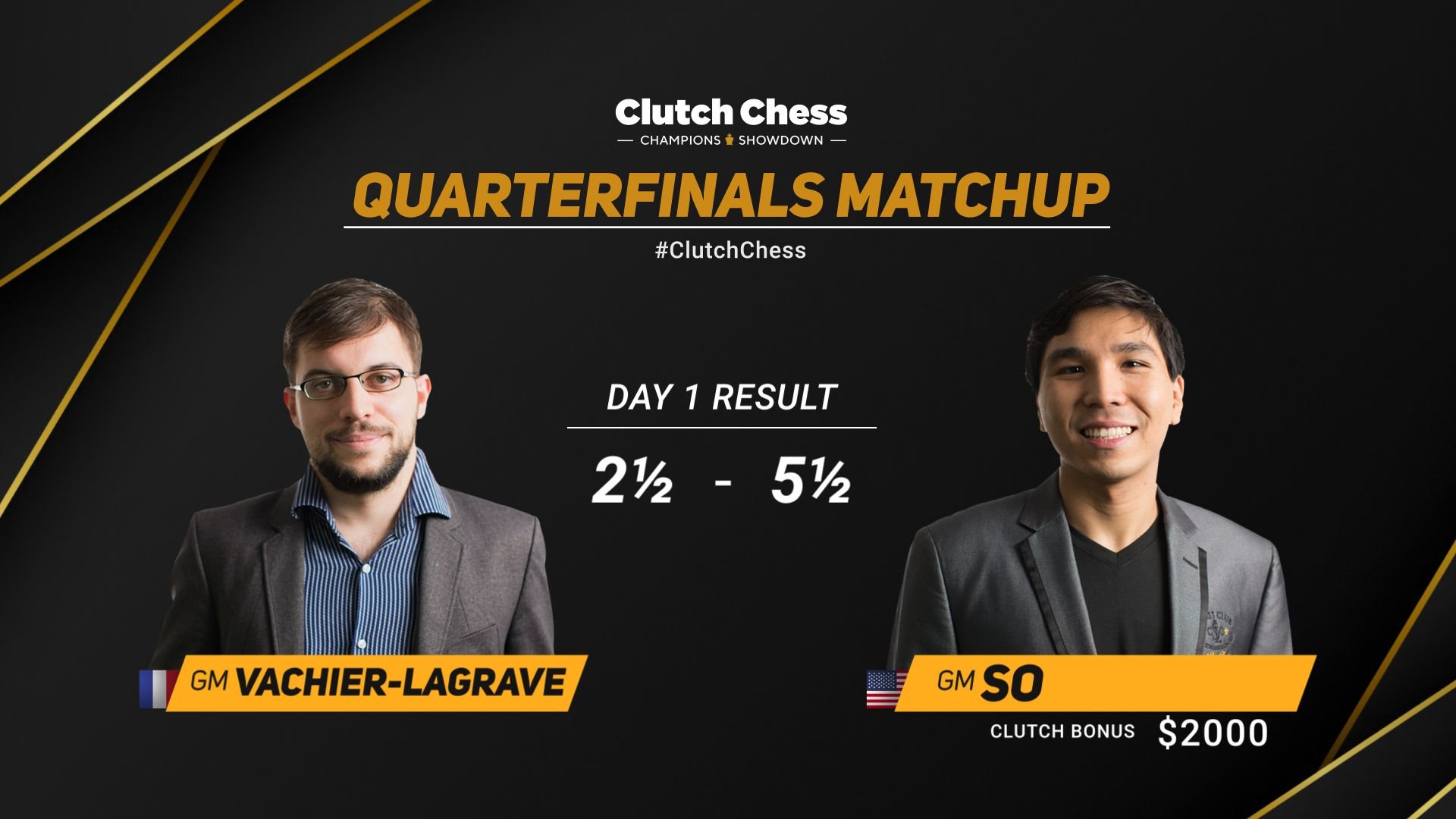 On paper MVL, as the no. 2 on the FIDE rapid rating list, is also the no. 2 seed for the tournament, but Wesley mentioned that he’d been doing some “research” on his opponent’s recent online form. It’s enough, perhaps, to post the final standings of the Magnus Carlsen Invitational: 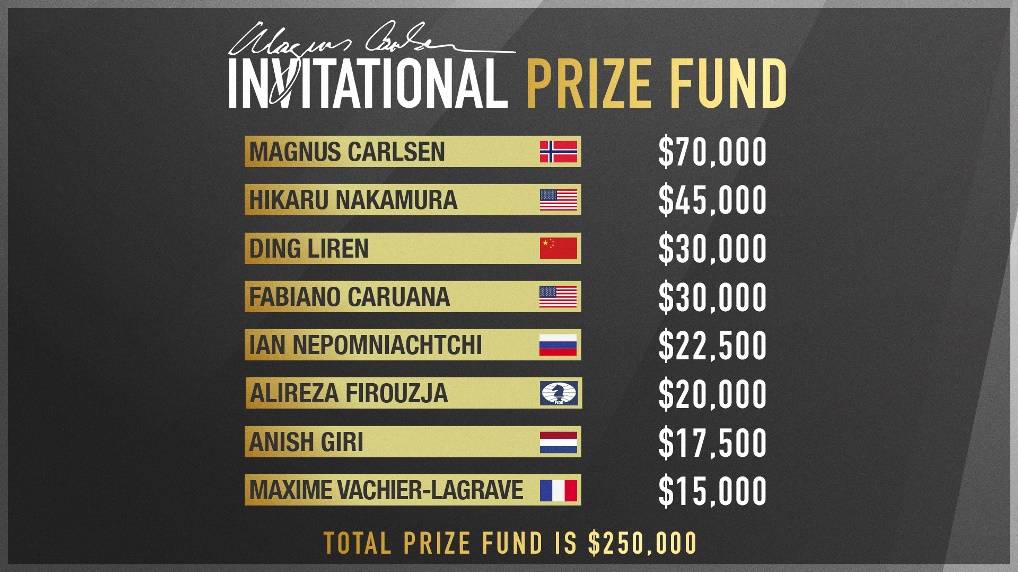 Wesley, meanwhile, had won the US only version of Clutch Chess a week ago, and that balance of power carried over into the match on Saturday. Maxime was essential lost in 15 moves of Game 1 after playing 15…0-0:

If I play much better maybe I have a chance. I think he could have won a couple more games.

The next two games were drawn as well, once more with Wesley the one pressing, but Wesley’s pressure finally paid off in Game 4:

24…Rd3! was a fine move to cut the lifeline to the b5-knight and after 25.Bxd3 exd3 26.Rxa1? Bxb5 Wesley went on to win. He then increased his lead to 3 points by winning the first clutch game with a kingside pawn storm. It could have been 5 points, but despite building up a big advantage with the black pieces Wesley let Maxime escape in the final game of the day.

A 3-point gap can be wiped out in one of the clutch games on the 2nd day of the match, but Maxime will first have to come to terms with the time control. He lamented, “at first I was going too fast, and then too slow”.

Both the matches resume on Monday, while on Sunday we have the first half of Caruana-Dominguez and Grischuk-Aronian. Tune in to all the action from 20:00 CEST!