China confirmed they have what it takes to dominate as a team after adding a convincing victory in the 2015 World Team Championship to their breakthrough 2014 Olympiad triumph. The driving force behind the team was 15-year-old Wei Yi, whose 7/9 performance won him a gold medal on board four and saw his live rating soar to 2717.5  and no. 34 in the world. Ukraine took silver while hosts Armenia took the final place on the podium ahead of favourites Russia. 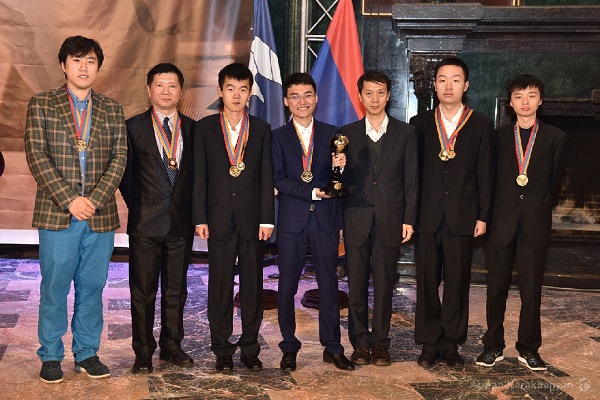 All China are lacking to confirm their domination of the top echelons of international chess is a male World Chess Champion after their team swept to victory in the World Team Championship held in Tsaghkadzor, Armenia, from 18-29 April. A somewhat slow start - only a single win in the first three rounds - gave no indication of what was to follow. China accelerated and after crushing Armenia 3.5-0.5 they went on to win all their matches except for a draw against Ukraine. Yu Yangyi was the only team member to lose a game, though he made up for his two losses with three wins. Ding Liren and Wei Yi both posted performances over 2800, making at least one top player conclude that a Chinese era in chess has begun:

As well as China's victory attention inevitably turned, once again, to yet another failure for the Russian team. They entered the tournament as the reigning champions and the rating favourites but lost their first two matches and only scored their first win in Round 5. Why do they fail to dominate such events? Former coach Evgeny Bareev had the following explanation for why the team without Vladimir Kramnik, Peter Svidler or Ian Nepomniachtchi had struggled:

In terms of selection I'd say that we sent a team of defenders... They're all very good defenders, but nevertheless they're defenders and we needed to "score". And no-one attacks us strongly since they consider a draw against the Russian team a good result. 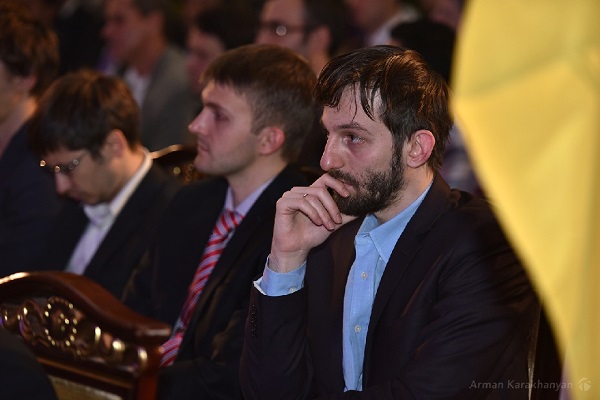 Alexander Grischuk, who scored eight draws and one loss on top board to drop 14.5 rating points, had no explanation for the failure, but otherwise was glad to be in the Armenian mountain resort:

Armenia is a native country for me as my father was born here. He told me a lot about Armenia. I've really liked it here. Tsaghkhadzor is a very beautiful place. On the event's rest day we went for a walk and on the way back we got caught in snow. Due to the snow the car couldn't climb up to the hotel. We were forced to walk about an hour on foot. It was funny, but at the same time interesting and beautiful.

China's victory was forged with the white pieces. Out of 18 games they won 9 and drew the other 9, while with Black they scored only +1 (3 wins and 2 defeats), with 13 draws. Their general approach was not to run too many risks, and with White they managed to squeeze out a lot of wins from balanced positions. It should be noted, though, that it could all have gone wrong in the penultimate round, since both Yu Yangyi against Bruzón and Wei Yi against Yuri González were losing with White but nevertheless managed to win their games!

Let's take a look at the final standings, both for teams and on the individual boards:

Levon Aronian scored 3 wins and 6 draws on top board and later commented on the performance of 2011 World Team Championship winners Armenia:

Since we started the World Teams poorly bronze medals also aren't bad. I always said - one for all and all for one. Since Sergei Movsesian and Vladimir Akopian weren't in their best form it was quite tough for us, and our play didn't come together. Taking that all into account third place is a big achievement.

Gabriel Sargissian explained there had been extra pressure on the hosts:

We started the World Team Championship badly. After four rounds we had only two points, which is a very bad result. Gradually we began to play better. I can't explain the reason - perhaps tension got in the way. We really wanted to win and dedicate the win to the victims of the Armenian Genocide, but unfortunately it didn't work out. I think bronze for our small country isn't a bad result either. 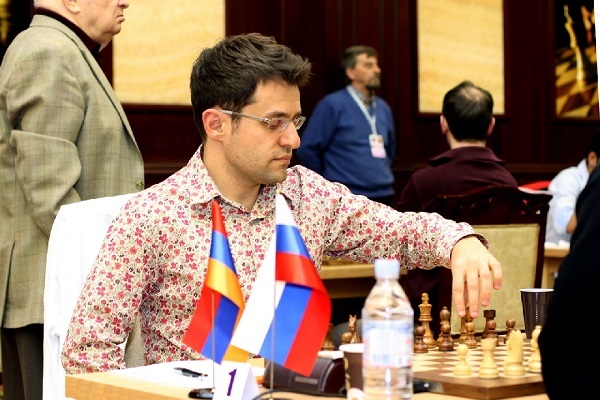 Aronian did everything in his power for Armenia | photo: Arman Karakhanyan, official website

Aleksandr Lenderman pulled off a great win over Vassily Ivanchuk which helped the USA to a surprise win over Ukraine and to an equally surprising 5th place overall, tied with Russia on match points despite an average team rating that was above only Egypt's. Team captain IM John Donaldson writes on the US Chess Federation website:

Alex Lenderman, who only made it on the team after Hikaru Nakamura, Wesley So, Gata Kamsky and Ray Robson declined, also won four games in a row! This included wins over Emil Sutovsky, Vassily Ivanchuk and Lazaro Bruzon. Alex's 5/7 score, good for a 2818 performance, earned him the gold medal on board two. It was great to see Alex, who doesn't get a lot of international opportunities, take full advantage of his chances. 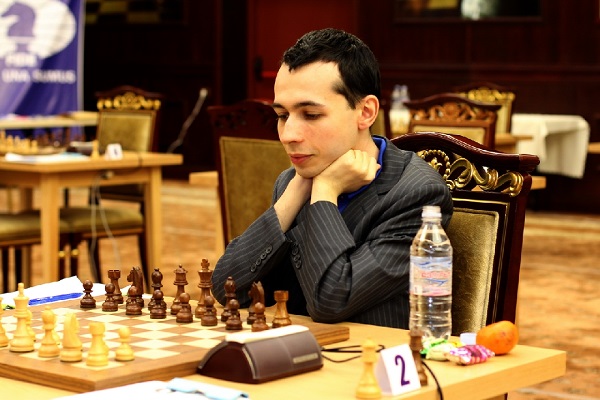 Aleksandr Lenderman was one of the surprise stars of the event | photo: Arman Karakhanyan, official website

Apart from that one loss Ivanchuk was the powerhouse behind the Ukrainian team, scoring three wins. He wasn't feeling the pressure, emotional or atmospheric, as he told an Armenian website:

I like everything here. Armenia is a chess country and it's good to be here and play chess. They say that in high mountains the pressure is higher, but it doesn't bother me. 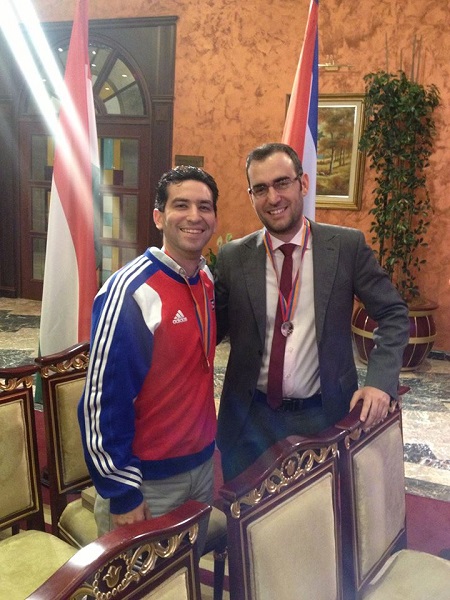 Gold medalist Quesada's first win was against 19-year-old Richard Rapport, whose downward spiral from the end of the Aeroflot Open just continued in Armenia. He's lost an incredible 38.9 points in a month: 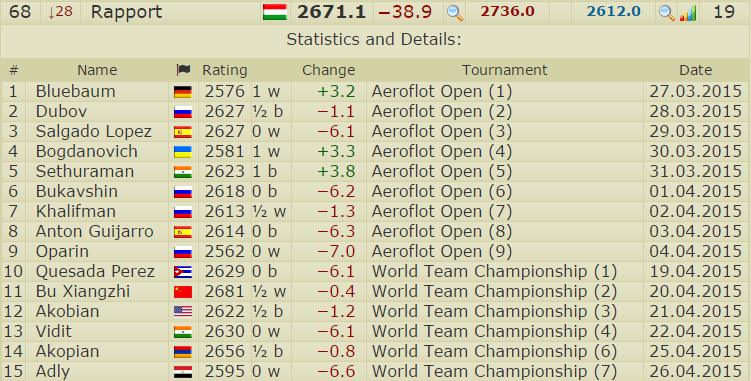 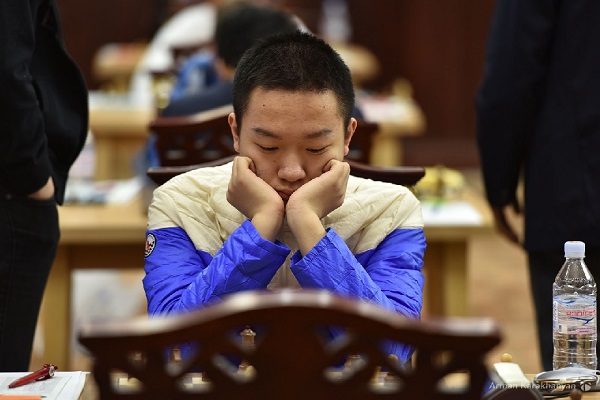 Replay all the games with computer analysis here on chess24!