“This is really a beautiful game… capping off a pretty spectacular tournament that he’s played,” said Magnus Carlsen after Yu Yangyi beat Wesley So to ensure China won the FIDE chess.com Online Nations Cup. Fabiano Caruana took his score to a brilliant 7.5/9 by beating Wei Yi, but a 2:2 draw wasn’t enough for the USA since China had draw odds by virtue of winning the preliminary stage before Sunday’s barely hour-long final. 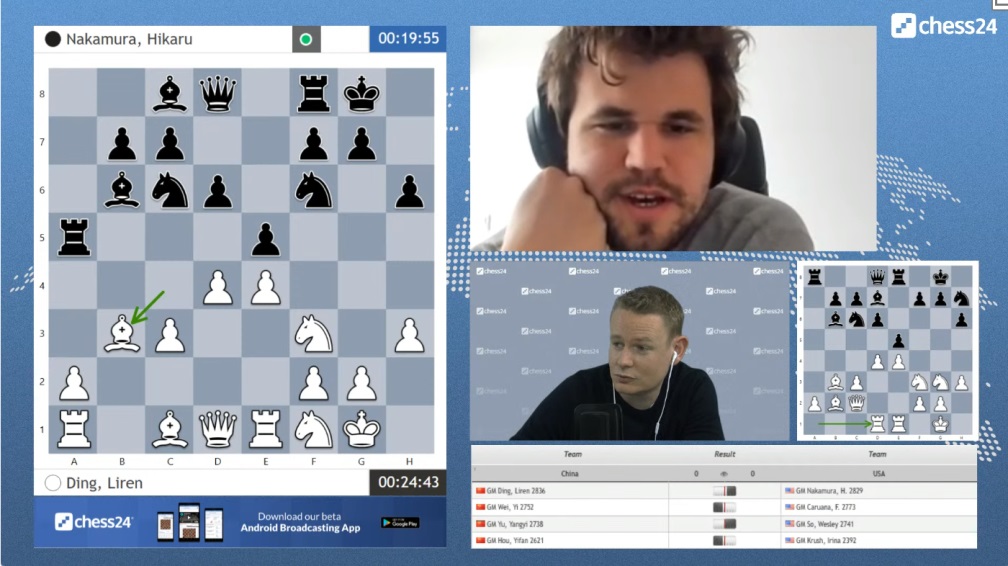 Magnus Carlsen joined Jan Gustafsson and Peter Svidler for commentary on the final match of the Nations Cup and you can watch their commentary – and a Banter Blitz session by Jan - below:

After five long days of preliminary action in the Nations Cup the “super-final” was short and sweet, at least for China:

At first things were looking promising for the USA. The biggest rating advantage for the US team on any board was for Women’s no. 1 Hou Yifan on bottom board against Irina Krush, but it soon became clear that Irina would neutralise that advantage with a draw.

On top board Ding Liren had beaten Hikaru Nakamura with the white pieces the day before, but Hikaru was the first to deviate with 9…a4 instead of 9…Be6. Black seemed to be doing very well, but Ding’s 35.e5! was working for White:

After 36.cxd5 cxd5 37.Re3!? Rxb2! 38.Qxb2 Bxe5+ our commentators were expecting Hikaru to push for a win, but suddenly the game was announced drawn!

That draw with Black against the world no. 3 would in most circumstances be a good result, and Fabiano Caruana was doing the business on board 2. China had played Wang Hao against Fabi in the two regular games in the tournament, but after two losses they replaced him with Wei Yi instead. The outcome was no better, however, with Wei Yi going for a surprise by playing the Scandinavian Defence (1.e4 d5!?), an opening he’d neither played in the tournament nor, it seems, in his career. 4…g6!? was already considered a dubious move by Magnus, who recalled the 1962 Fischer-Robatsch Olympiad game!

It was one-way traffic, although for a while it seemed as though Wei Yi might wriggle out until he played 30…Re2?, allowing 31.Rxf7+ Kg8 32.Re7:

White is already a pawn up, threatening the e8-knight and also threatening to play 33.Nxg6, which it turns out can’t be stopped. Wei Yi didn’t help his position at all by playing 32…Re1+ 33.Kh2 and only then 33…Ng7 34.Nxg6! Ra1 35.Ne5 Rxa2 36.Ng4! and with Fabi having an extra pawn and a tight grip on the position it was all over bar the shouting:

That made Fabiano Caruana the tournament’s top performing player, with a spectacular 7.5/9: 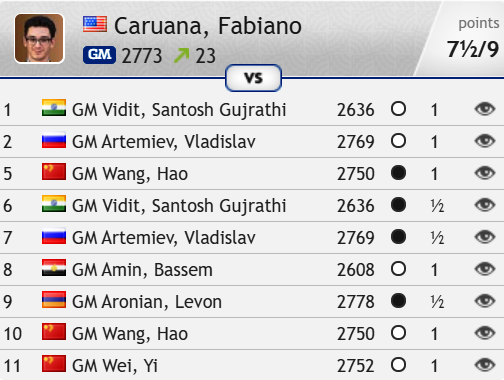 Once again, as in the Magnus Invitational where he only lost to Hikaru Nakamura in a thrilling semi-final, Fabiano had shown he’s pretty good at rapid chess. Magnus commented:

You could certainly argue, however, that Yu Yangyi was the most important player in the event. He played one more game, and although he did lose badly to Wesley So in the final round of the preliminary stage, he more than made up for it in the final! 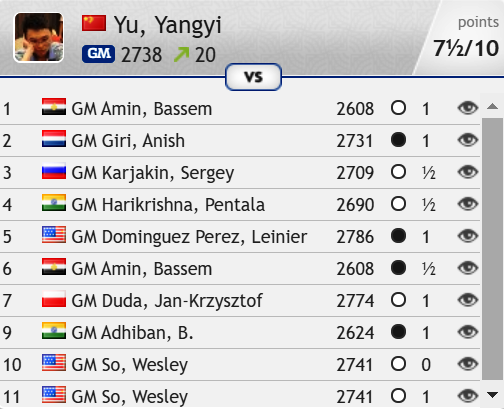 When Wesley was forced on the defensive our commentary team felt he’d gone badly astray:

Yu Yangyi correctly allowed Wesley to pick up a pawn with 18.Rfd1! Ba6 19.Qe6 Bxe2 20.Rd2 Ba6 21.Nh4, using that time to gather pieces for a kingside assault. Black seemed more or less to be holding, but after 25…Rf6 there may no longer have been a defence: 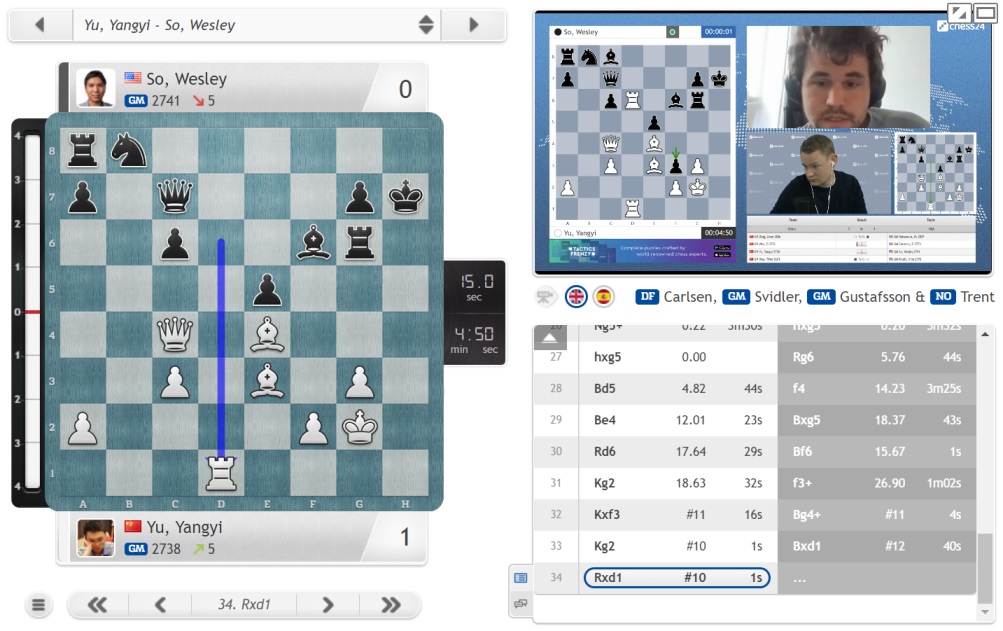 There's no good defence to the threat of the rook coming to h1 and giving mate. Magnus summed up:

This is really a beautiful game. It’s not a beautiful game by Wesley, but really, really nice by Yu Yangyi, capping off a pretty spectacular tournament that he’s played.

It meant that China had scored the 2:2 they needed to win the tournament. After little over an hour the final match was over and, since China had finished top in the qualifying phase, they were declared the Champions. Magnus Carlsen commented:

This just feels like such a let-down! Was this the whole final? There’s no Anish Giri, there’s no tiebreak, there’s nothing?

It was a distant echo of the 2018 Olympiad, when China drew USA 2:2 in the final match and took gold on tiebreaks. They’ll hold that title as well until at least next year, since this year’s Olympiad has been postponed. 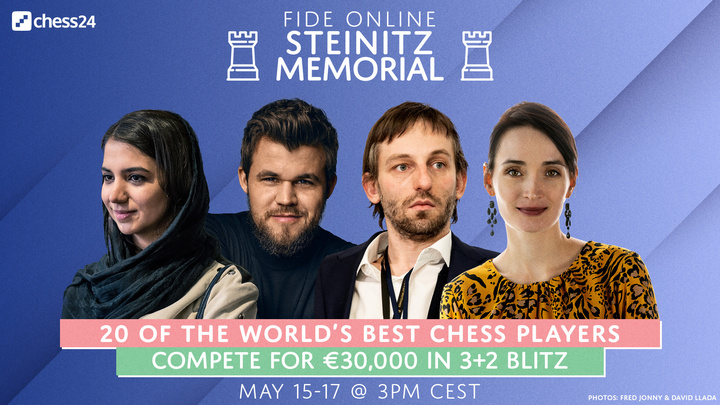 That’s being played here on chess24, while there’s also something big coming shortly after that – stay tuned for an announcement later this week!