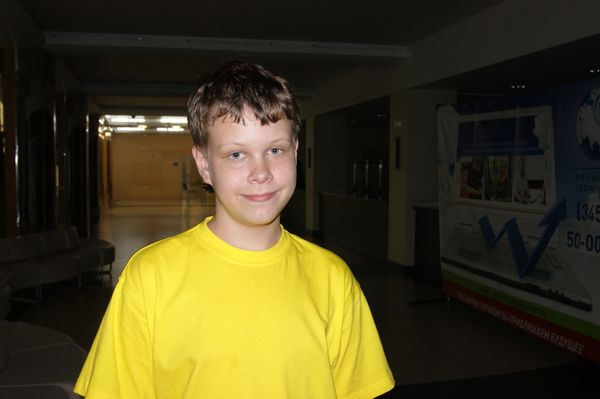 Vladislav Artemiev at the 2012 Russian Higher League: "In chess I dream of three things: getting 2800 and winning Wijk aan Zee and the Tal Memorial. It's hard to become World Champion and I worry I won't. You need to win a match for that? Anand will soon be beaten, though maybe by the time I strengthen Carlsen will be getting old?" | photo: ruchess.ru

Is 16-year-old Vladislav Artemiev set to follow in the footsteps of Anatoly Karpov, Vladimir Kramnik and Mikhail Botvinnik? Spanish IM David Martínez continues his series looking at the Russian and Chinese schools of chess by examining three endgames in which the young Russian talent demonstrated extraordinarily good technique.

Stay patient, create a weakness, fix it, then attack it. Classical concepts such as this one were at the heart of the Soviet School of Chess established by the Sixth World Champion, Mikhail Botvinnik. That “Soviet” technique attained its peak in the filigree technique of two later World Champions, Anatoly Karpov and Vladimir Kramnik, though of course it was also evident in Botvinnik’s contemporaries Vasily Smyslov and Tigran Petrosian. 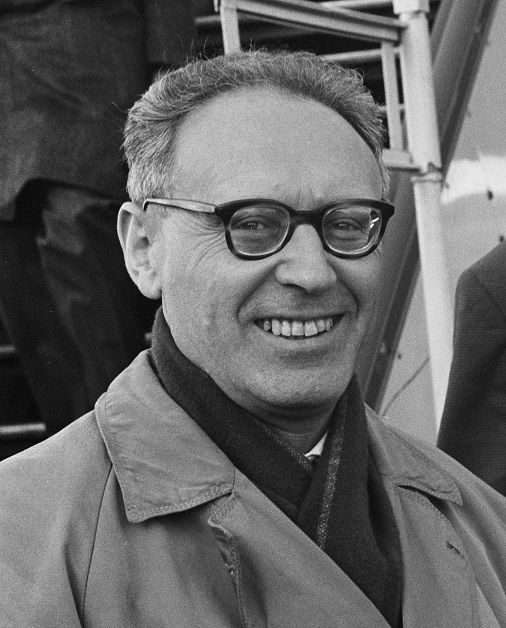 Mikhail Botvinnik was one of the founders of the Soviet School of Chess | photo: Pot, Harry / Anefo

We shouldn’t forget there’s also a lineage of dynamic players, exemplified by Alexander Alekhine, Mikhail Tal and Garry Kasparov, but the top young Russians led by Vladislav Artemiev and Aleksandra Goryachkina prefer a much more subtle and positional style of chess. Analysing their games – and we’re going to look at three involving Artemiev – you can’t help but feel the “Patriarch” – Botvinnik – would be very proud that his legacy has extended into the post-Soviet era. 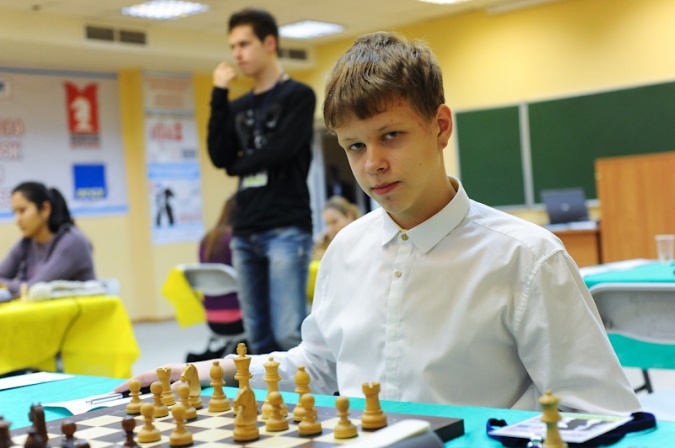 Artemiev scored 8/9, for a 2869 performance, at the student round robin during this year's Moscow Open | photo: official website

Artemiev exemplifies Botvinnik’s methodical technique. With the white pieces he prefers a calm game and normally plays queen’s pawn openings, not looking for any great theoretical complications. He aims for solidity and a microscopic edge in the opening, which he’s then willing to try and exploit for hours on end, usually with great success! With Black he also plays for a win, not shying away from complications but playing the highly theoretical Najdorf and Grünfeld.

Let’s take a look at three “difficult” games for Artemiev, all wins in classical chess against higher-rated grandmasters: Denis Khismatullin and Maxim Matlakov (twice). In all three encounters you can observe the same pattern: Vladislav shuns complications in the opening, plays quietly but then slowly but surely ups the pressure until his opponent goes wrong. Three true positional gems.

Artemiev, at the time still only an International Master, qualified for the 2015 World Cup by scoring 7.5/11 at this year's European Individual Championship, losing a single game to the eventual winner, Alexander Motylev. In Round 3 he provided a wonderful example of how to exploit a weakness:

13. ♗c6! ♗xc1 14. ♖xc1 dxe5 15. ♖d1‼ was the most precise way to retain the advantage, since the white centre survives. In the game Khismatullin manages to destroy it.

29... g5⁈ A slightly compromising move, since the pawn can be a weakness, something Artemiev immediately tries to exploit.

30. h4! The first step in exploiting a weakness is to isolate it. That's why Artemiev looks to exchange the h-pawns.

33... ♔f6? A very human move, defending the weak pawn, but this allows the white rook to seek a second weakness on the back rank abandoned by Black. The silicon monsters demonstrate a contrived defence of the g-pawn: 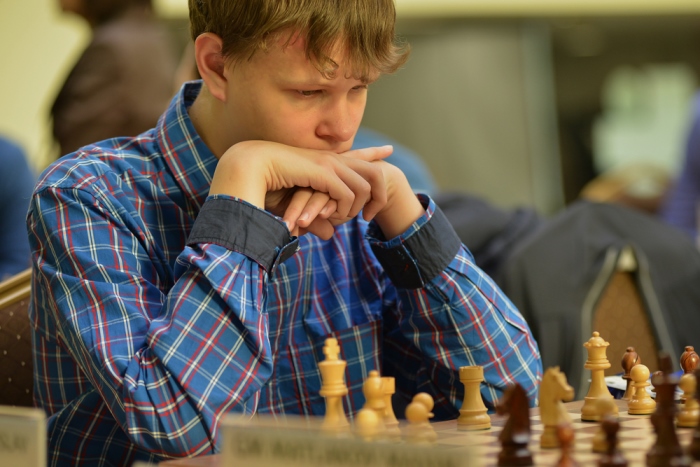 Artemiev on his way to a 2712 rating performance and 13th place at the 2014 European Championship in Yerevan | photo: Arman Karakhanyan, official website

Artemiev's victim in that game, Denis Khismatullin, won the 2013 Ugra Governor's Cup, but Artemiev was only half a point behind. In his game with Maxim Matlakov he showed how to win with a good bishop against a bad knight

34... c5 35. a4 c4 36. a5 ♖a8 37. ♗c3 The bishop demonstrates its full potential by performing three roles at once: it protects the a-pawn, blocks the c-pawn and attacks g7. Only the best knights, in the most favourable positions, can do as much.

45... ♔d6 46. ♔e2 ♔c6 stops the a-pawn, but then White would switch to an attack on the kingside. Simplifying on a5 is never going to be possible and the combination of a lack of coordination and two weaknesses (in this case one of the weaknesses is not having an a-pawn!), would lead to defeat for Black. 47. ♔f3 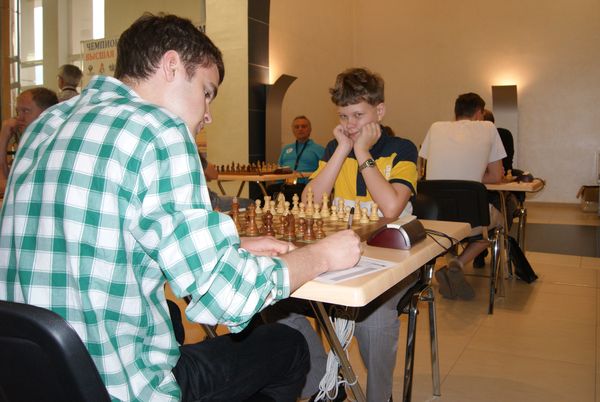 Just as proof that Matlakov doesn't always lose to Artemiev... this is a photo of their drawn encounter in the 2012 Russian Higher League | photo: ruchess.ru

Finally let's return to the European Championship, and the vital last round game against 23-year-old Matlakov. After a marathon 129-move effort Artemiev managed to accomplish his mission and qualify for the World Cup, while his opponent, who started the day on the same number of points, sank to 53rd place. It was a true triumph of technique:

29. ♖7e5 ♕f6 30. h4 What's the rush? Artemiev delays the capture on d5 in order to slightly improve his position first.

112... ♕f7 , as played before, would have held the balance, since the c4-square is available from which to check the white king.

You can learn a lot from observing the methodical approach young Artemiev uses to win these endings. He’s clearly assimilated much of the Soviet and Russian heritage, but before his career’s over we might instead be looking to his games to discover the secrets of “Russian” chess!

As we’ll see in the next instalment, though, the Chinese school takes a completely different approach.