“Today was a masterclass by Ding” was how Peter Svidler summed up Ding Liren’s brilliant 2.5:0.5 victory over Hikaru Nakamura to clinch a place in the Chessable Masters semi-finals. Ding Liren now goes on to play Magnus Carlsen on Tuesday, with an impressed World Chess Champion commenting, “He can just run you over without giving you counterchances in a lot of games”. The other semi-final is Anish Giri vs. Ian Nepomniachtchi. 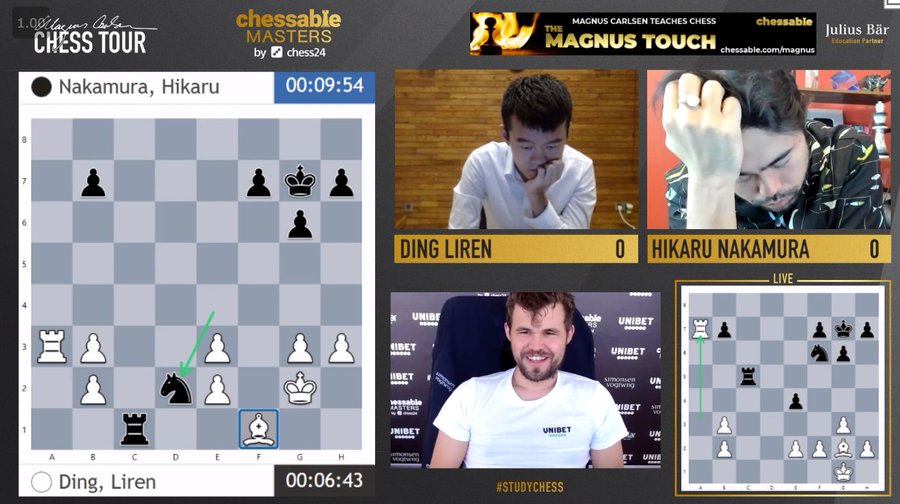 You can replay the live commentary on Day 9 of the Chessable Masters below, with Magnus Carlsen joining our commentary team of Yasser Seirawan, Peter Svidler and Anna Rudolf for most of the show.

Go Premium with the code STUDYCHESS and get 40% off!

The win in the third set for Ding Liren means we now know the four semi-finalists, and also the players who will receive an automatic invitation for next month’s Legends of Chess stage of the Magnus Carlsen Chess Tour! You can replay the games here. 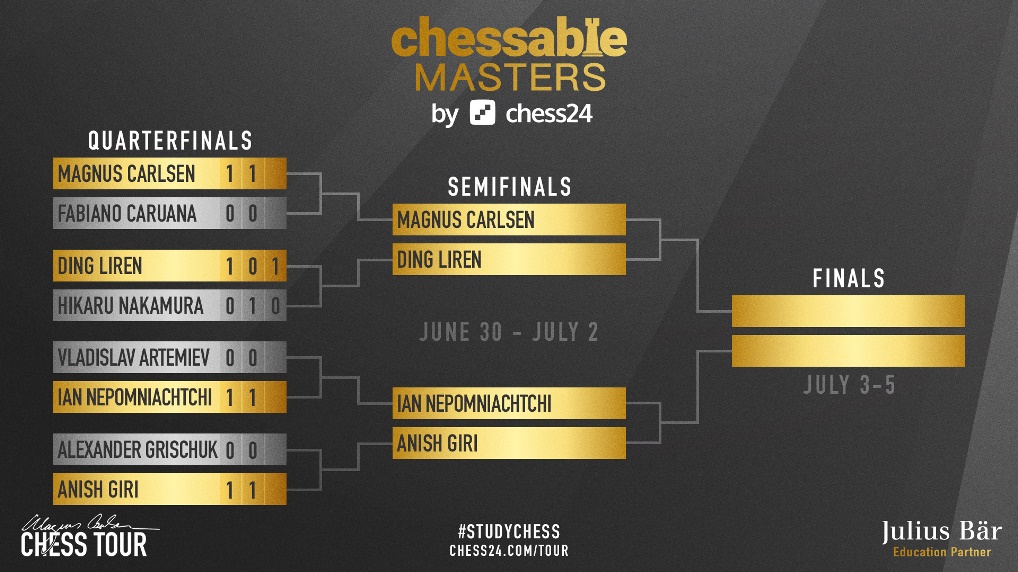 There was just one warm-up game before the day’s action caught fire, with Game 1 a quiet Catalan that ended in a draw by repetition on move 28. Game 2 was altogether more interesting, with a 4.d3 Anti-Berlin becoming a rich strategic battle, where Ding Liren’s 15…Nb8! might have looked like a retreat – putting all the black pieces on the back rank – but had a clear intent:

The knight is en route to the gaping hole in the white position on b4, and our commentators, who included Magnus Carlsen, felt White had no time to spare and should start operations in the centre with 16.f4!, preparing f5 or e5 to follow. Computers agree, while after 16.Rac1!? Black was already doing well.

Magnus felt both players were “playing a bit too fast” in a very complicated position:

The objective turning point, and the moment Ding Liren pointed out afterwards, was when he got to play 26…Ra8! 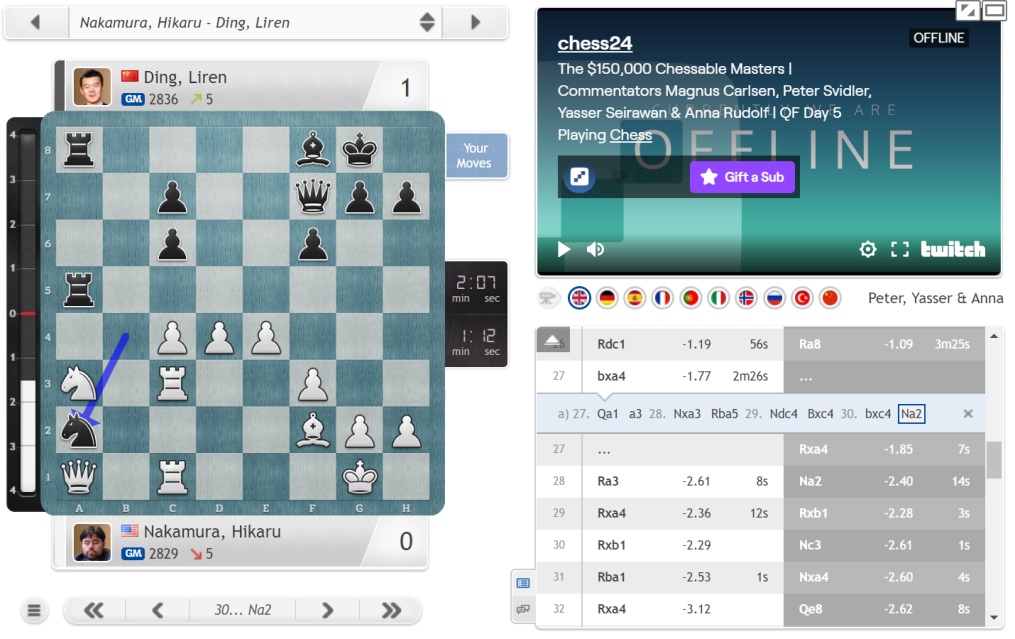 The white queen is attacked, while 29.Qxa2 runs into 29…Rxa3 and the pinned c4-knight can’t come to the rescue. Hikaru had to give up his queen with 29.Rxa4, but 29…Rxb1 30.Rxb1 Nc3! was the sting in the tail that ensured Ding emerged with a material advantage.

The big question, however, was whether it would be enough to win the game:

Magnus thought it might not be, with Ding Liren saying afterwards that the only way he saw to make progress was to go for an early f5-break, as he did with 39…g6 40.Kg2 f5 before White had the chance to play Ng3.

A key moment identified by Ding and our commentators was after 47…Kc4:

Magnus was explaining that Black’s plan is to somehow force White to play h5 and then return with the king to pick up that pawn. It was surprising, therefore, that after a minute’s thought Hikaru went for the move unprompted with 48.h5!?. Ding agreed that he didn’t see how to win without this move, while afterwards it was plain sailing.

That win with the black pieces left Hikaru needing to mount another comeback, but in hindsight it would have been better not to try and do it with Black in Game 3. He returned to what used to be his signature opening, the King’s Indian Defence, where he’d claimed the scalps of the likes of World Champions Vishy Anand and Vladimir Kramnik. It was a high-risk strategy, with Magnus Carlsen sharing some chess history related to those great players.

Magnus revealed what went on when he helped Vishy prepare to face Vladimir in the 2008 World Championship match. It turns out Magnus knew the Indian’s big secret in advance – that he’d switch from his trusted 1.e4 to 1.d4!

I was told to play the King’s Indian and just try to mate him, so I do have some experience there, and as far as I can remember the first two or three games against Vishy I just mated him on the kingside, and then after that I lost every game basically, so my appetite for these particular positions waned a bit!

The computer evaluations were around a pawn up in Ding Liren’s favour, but that’s seldom worried a KID player. White seizes space on the queenside and is always shown as significantly better… until he’s not, and often it’s suddenly time to resign.

This time, however, even as renowned an attacker as Hikaru failed to get a hint of an attack, with Ding Liren having all the fun:

27…Bxh3 28.Rh2!, or even 28.Nxg5! first is devastating, while after 27…cxb6 Ding simply continued to calmly build up his position, as if providing illustrative material for Magnus’ chess24 series Attacking without Sacrificing. Magnus himself noted that, “I think every good chess player is a bit of a sadist” and had earlier echoed Bobby Fischer when asked if he watches his opponent during online events:

It must be hard not to glance at the camera when Hikaru's playing:

The final position told a story of total domination, while also being an echo of Nakamura’s 29.Qa4, attacking a rook on d7, which had capped off Hikaru's comeback win the day before.

With this victory Ding Liren had won the quarterfinal by 2 sets to 1, setting up a semi-final against Magnus Carlsen. The watching World Champion had been duly impressed, even if he wasn’t panicking:

It’s going to be tough, obviously, but I always give the same answer, it’s going to be tough but I feel good. He’s shown in these tournaments, and I think especially in this match, that he has got some serious positional chops. He can just run you over without giving you counterchances in a lot of games. He’s extremely strong, of course.

The one thing that sort of bodes well for me is the starting time, because he’s going to be playing in the middle of the night… I guess I’ve got to drag the matches out, to get it to midnight for him, or even worse. That’s my best chance, I think!

That was of course more of a joke than anything of else, while Ding Liren is also relishing the battle, commenting, “I’m very happy to play against Magnus since we have played a lot of exciting and fighting games”.

Magnus also has his Fantasy Premier League career to think of!

If you fancy some FantasyChess instead be sure to join our semi-finals contest!

There’s another semi-final, of course, with Anish Giri and Ian Nepomniachtchi having earned the right to a rest day by winning their quarterfinals in two sets. Giri is still dreaming of that final against Magnus!

We’ll be live once again from 15:30 CEST here on chess24, with 2018 US Champion Sam Shankland joining Yasser Seirawan and Anna Rudolf.