Chinese world no. 2 Ding Liren said his plan “to avoid any complicated line” paid off as he won both games with the black pieces on Day 1 of the Chessable Masters final. 16-year-old Indian prodigy Praggnanandhaa managed to hit back in Game 2 but was held to a draw in Game 4 as Ding Liren won the first mini-match 2.5:1.5. That means Pragg must now win Thursday’s second match to force tiebreaks, or Ding Liren will have won his first Meltwater Champions Chess Tour title. 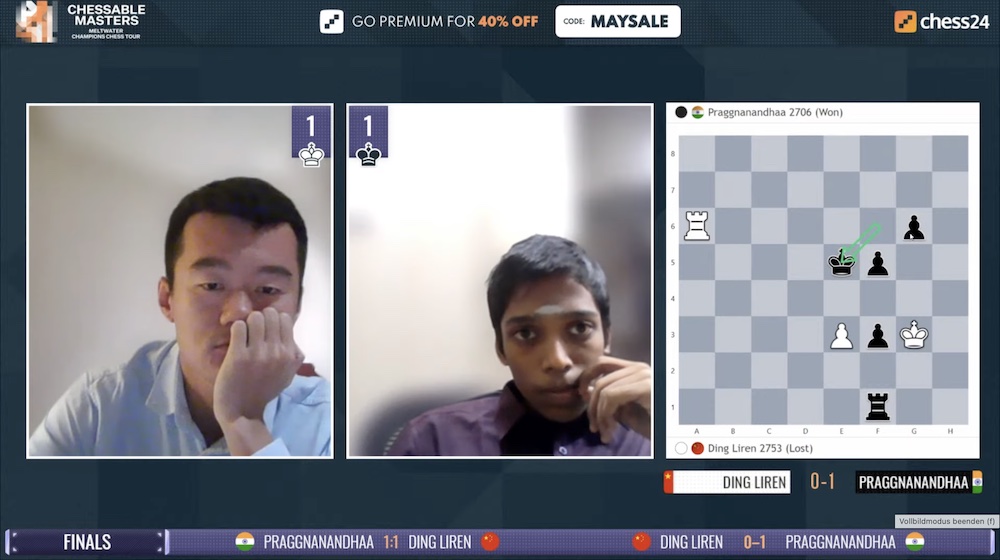 Praggnanandhaa hit back in Game 2, but it was Ding Liren who won the first match

You can replay all the games from the knockout stages of the Chessable Masters, the 4th event on the $1.6 million 2022 Meltwater Champions Chess Tour, using the selector below.

Day 1 of the Chessable Masters final was a good day for Black, who won the first three games. 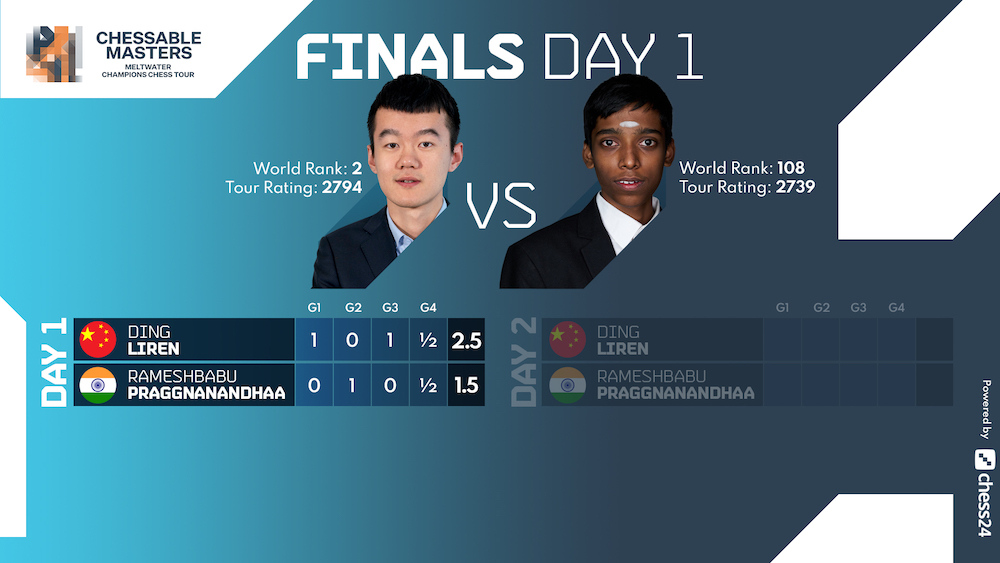 It tells you just how dangerous a player Praggnanandhaa is that Ding Liren, one of the best calculators in the history of chess, explained his strategy as follows:

It’s a tense match. I’m very happy about my performance with the black pieces, since my strategy is to avoid any complicated line and avoid any long and forced line, and it just works.

The opening line was one that had only been played, twice on the same day and 2,000 km apart, a few weeks ago. Alireza Firouzja said of it back then:

This line normally they don’t play with Black, because ok, it’s a little bit worse for Black, and it’s not very popular, so to happen on the same day is amazing… In general, White has a great pawn structure and the pieces are out, but Black is very solid.

Firouzja also mentioned that Fabiano Caruana told him 13…a6, as played in both those games, “is not very precise”, and here Ding went for the new move 13…Nf8, sending Praggnanandhaa into a 3-minute think.

This time, however, rather than Ding needing to defend a passive position, he soon managed to take over.

Jan Gustafsson mentioned that the idea of 19…c4! in such positions was once considered a positional mistake, but that now people, and the latest engines, have begun to realise how strong it can be. In this case after 20.Bf5 b5! 21.Ne5 Bxf5 22.Qxf5 b4! Black’s queenside attack was rolling.

There was perhaps one fleeting chance for Pragg to stem the tide.

Instead after 26.Ng3 things went downhill fast, with the black queenside pawns impossible to stop.

32…c3! was simple and powerful, and soon Pragg had to give up his knight to eliminate the pawns. He was just a piece down and resigned on move 42.

“Even losing one game with White in a match is a tough thing,” said Praggnanandhaa, but he managed to hit straight back. He commented:

I didn’t expect it myself when I went to Game 2! But I think overall this game was quite good, I kind of managed to put pressure throughout the game, and ok, in the end there were some mistakes, I guess, but in time trouble it’s not easy to convert such positions.

Ding went for a modest opening where he fianchettoed both of his bishops, and as it slowly developed there was time for some fly-catching…

Gradually, however, Praggnanandhaa began to take over, even if his advantage always seemed to be more “nagging” than clear-cut.

I was impressed by his time management. He would spend a lot of time on one move, and then be very confident about his play, and the move he came up with was also very strong, and in the second game he gave a lot of pressure and finally I cracked under time pressure.

The 3 vs. 1 rook ending that arose was fiendishly tricky, with the computer evaluation constantly swinging between won for Black and a draw for reasons that neither the commentators nor the players could fully fathom. It was a nightmare to defend, however, and ultimately Pragg won in 58 moves.

Game 3 was a case of déjà vu, as Ding Liren once again went for a quiet opening with Black.

It would work to perfection, since Praggnanandhaa, in an already difficult position, lashed out with 21.g4!?

White is of course dreaming of a kingside attack with g5, but there was never time, as Ding Liren went for 21…c5! 22.d5 c4! 23.Qd2 b4! and once again the black queenside pawns were winning every race. Black’s bishop, that had been perfectly placed on f8, both defending the kingside and supporting the pawns, found itself on d2 by the time Pragg resigned on move 39.

That meant Praggnanandhaa had to win on demand with the black pieces, and he tried to mix things up with the off-beat, and objectively not so good, 3…Nc6!?

Ding had been in a similar situation in the quarterfinal against Shakhriyar Mamedyarov.

It reminds me of my match against Mamedyarov. I also had a one-point lead and I also had the white pieces, so my aim was to exchange the pieces as much as possible. He played very creatively, like 12…Rd7, and 15…Ne8, he keeps the tension, but I don’t think he has any real chances.

Pragg battled simply to keep the game going, but eventually he had to accept it was a draw and Ding Liren had won the opening match.

Both players are battling fatigue, with Ding Liren commenting:

Still one day left, and I’m getting tired day by day, so I hope tomorrow I can get what I want!

For Pragg, meanwhile, the first day of the final had started with a school exam in the morning. How had it gone?

It went decent, it went well, I can say. Probably it shouldn’t be a problem. I guess I will pass… I think!

He has another exam on Friday, but on Thursday he can focus on trying to defeat Ding Liren on demand and take the match to tiebreaks.

I’ll try to give my best and see how it goes. More importantly, probably I’ll take more rest tomorrow and then come fresh for the match.

The tournament must end Thursday, so don’t miss all the Chessable Masters here on chess24 from 18:00 CEST!