Levon Aronian needed just three games to beat Shakhriyar Mamedyarov while Liem Quang Le took down Alireza Firouzja on Day 1 of the Chessable Masters quarterfinals. Nakamura-Artemiev saw a relatively quiet 2:2, but the other tied match was sensational, with Jorden van Foreest defeating Wesley So in 19 moves and close to winning two of the other games. Wesley admitted he was “very lucky to get two points”. 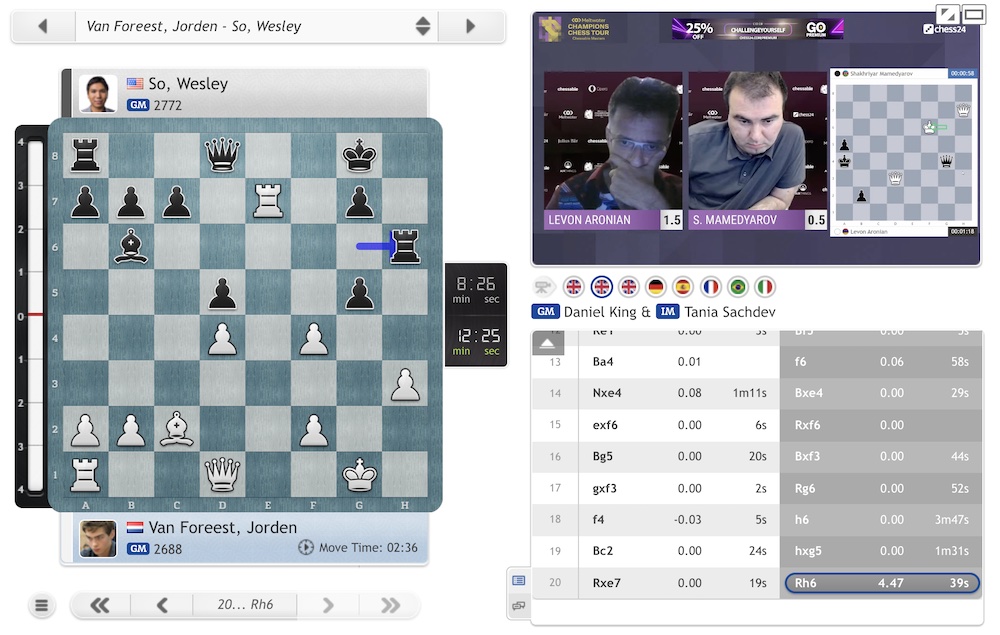 You can replay all the knockout games from the Chessable Masters, the 8th event on the $1.6 million Meltwater Champions Chess Tour, using the selector below.

And from Danny King and Tania Sachdev.

Alireza Firouzja and Shakhriyar Mamedyarov have must-win matches on Wednesday after the first day of quarterfinals action. 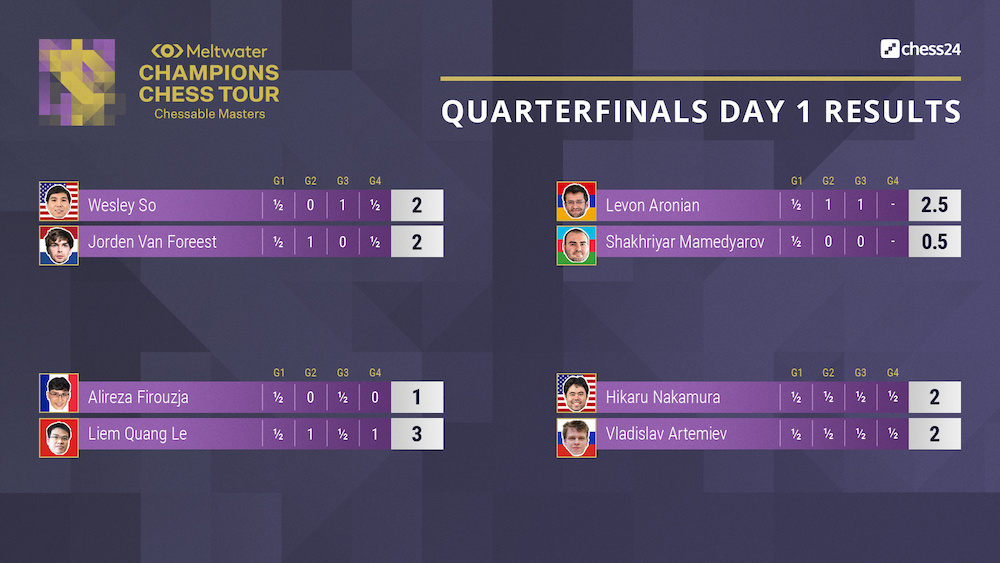 On paper if you were looking for a weak link in the quarterfinal line-up you might have singled out 22-year-old Tata Steel Chess winner Jorden van Foreest, if only for his lower rating and relative lack of experience in online rapid chess. It was remarkable, therefore, that the 2nd best player in the Meltwater Champions Chess Tour, Wesley So, had such a tough day at the office.

It was really a very bad day for me, or maybe Jorden just played really well, but obviously based on the positions I’m very lucky to get two points. I was in severe pressure with the black pieces, so today clearly is not my day — so many mistakes! I hope I play much better tomorrow. Props to Jorden for playing extremely well today.

Players have a tendency to exaggerate in post-game interviews, but in this case Wesley was right. The computer was giving Jorden a +3 advantage for much of the first game, though it was never simple and Wesley defended well. The second game, however, was a blow-out, with Jorden winning in just 19 moves!

The Dutch star decided to try the move 5.Bg5!? to get a fight in an Anti-Berlin, and it worked like a dream after Wesley’s response 5…Ne7!?, which cost him a minute and a half.

He later suggested he should have played 5…h6 first. Wesley then pointed out that his 12th move was more or less the losing mistake.

He went for 12…Kh8, but should have played 12…f4!, which he called “pretty hard to find”. That would prevent the white knight easily getting to e4, cut off the queen's route to h6 and also prevent the pawn move that Wesley labeled “gg” — 16.g4!

The computer suggests some hope for Black after 16…Qe7!, but after 16…Ng7? 17.Qh6! it was all gone, with Wesley resigning two moves later. It’s not often you see this kind of miniature when Wesley’s on the losing side!

Wesley explained his strategy for coming back after a loss:

It’s very important to have a short memory in chess and to take each game as if it’s the first game of the tournament.

He did manage to hit back in Game 3, though it’s notable the ending could have been held by Jorden if he’d spotted the position in which it was better to do nothing rather than push pawns. Game 4 was a case of balancing on the edge of the abyss for Wesley.

Jorden said afterwards he hadn’t realised how good his position was in that game, but overall was happy with his day.

2:2 is of course an excellent result for me against Wesley, who is one of the best players in this format in the world, so definitely very happy and just to win a game against him is always something special and I think I won in 19 moves, so that’s even more special.

If either side had taken the lead in this heavyweight struggle we could have expected fireworks, but as it was we got four relatively quiet draws, though Hikaru in particular had some chances in his games with White. More action is guaranteed on Wednesday.

Liem Quang Le beat Alireza Firouzja in the Asian Continental Championship while in rapid chess he memorably knocked Alireza out of the Skilling Open after winning their last-round game in the preliminaries — a shocker, since Alireza had played brilliantly to become the co-leader with just two rounds to go. Liem called Alireza “a very good opponent for me”.

In the Chessable Masters, Le said he’d checked the line that happened in the first game the day before, and had no problem drawing. The second game was then an impressive win for the Vietnamese player, though he admitted he panicked a bit at the end and there was briefly a chance for Alireza to save himself.

Things didn’t get easier for Alireza in the next game, where he failed to convert a winning position Le admitted he “deserved to lose” and felt his opponent “was a bit tilted in the last game”. Alireza’s risky opening fell right into the analysis from a course Le is making for the tournament’s sponsors Chessable.

It’s fair to say if you weren’t checking with a computer to produce a course you might never have guessed the existence of 8.Ne4!! as an option, and in fact just a winning move.

8…cxd3 runs into 9.Nxd6+ exd6 10.Re1+ Be7 and various unpleasant fates are on the horizon for the black king. A fun position to analyse with the interactive board on our broadcast. After 8…Nxe4 in the game White was much better, though it has to be said there were plenty of twists before Liem went on to win.

Shakhriyar Mamedyarov had won four games with the black pieces in a row to defeat Levon Aronian when they met in the 3rd place match of the New in Chess Classic, and he had a lot of pressure with black in their first game of the Chessable Masters quarterfinals. Levon held, however, and explained his strategy:

I was trying to calculate a lot and focus and keep my attention the whole time, because he’s a very tricky player.

In the next game, however, it was Levon who emerged victorious in a tricky endgame.

Shakh needed to hit back, but instead he went down in flames after a wild game in which queens disappeared and reappeared on the board. There were too many twists to summarise, but Levon noted it had been fun.

Since I was leading in the match it’s kind of a risk-free environment, so it’s pleasant just to try and score a win if possible. It’s a situation that of course it’s very pleasant to get.

He sealed victory in both the game and the match.

So Mamedyarov and Firouzja must hit back on Tuesday, while all four matches must be decided, either in rapid chess or in the blitz playoff! Tune into live commentary from 17:00 CEST.