“Magnus is not here so the tournament is very open”, said Wesley So, after another smooth day at the office saw him win the preliminary stage of the Chessable Masters. Most of the other top players also cruised, with the main drama surrounding Jorden van Foreest and Adhiban. When the Indian won their individual game he was leading the chase to qualify with three rounds to go, but Adhiban lost all three games as Jorden set up a match with Wesley. Meanwhile 12-year-old Abhimanyu Mishra took down his sometime coach and world no. 21 Harikrishna! 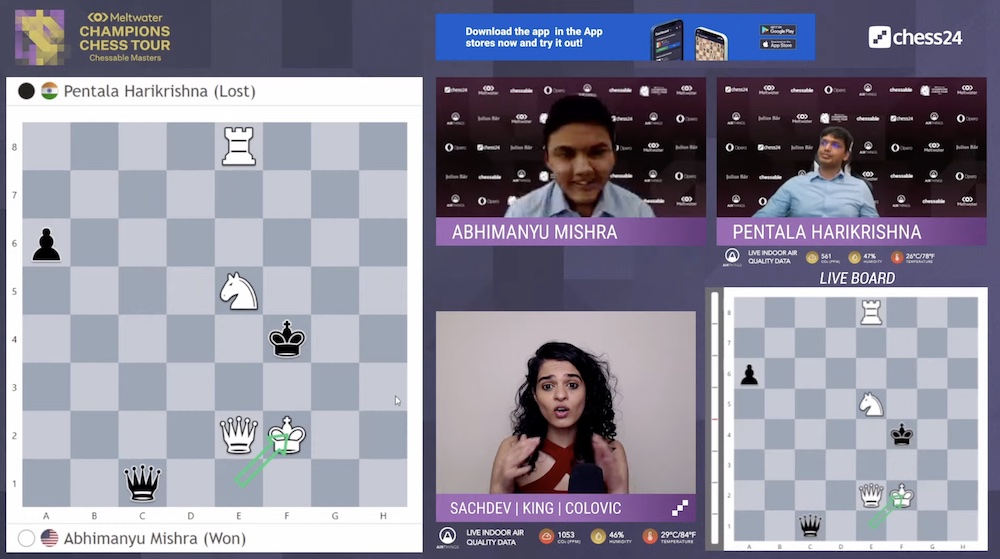 You can replay all the games from the preliminary stage of the Chessable Masters, the 8th event on the $1.6 million Meltwater Champions Chess Tour, using the selector below.

And here’s the day’s live commentary from Danny King and Tania Sachdev.

And from David Howell, Jovanka Houska and Kaja Snare.

The standings after the 15 rounds of the Chessable Masters Prelims looked as follows, with the Top 8 players qualifying for the quarterfinals. 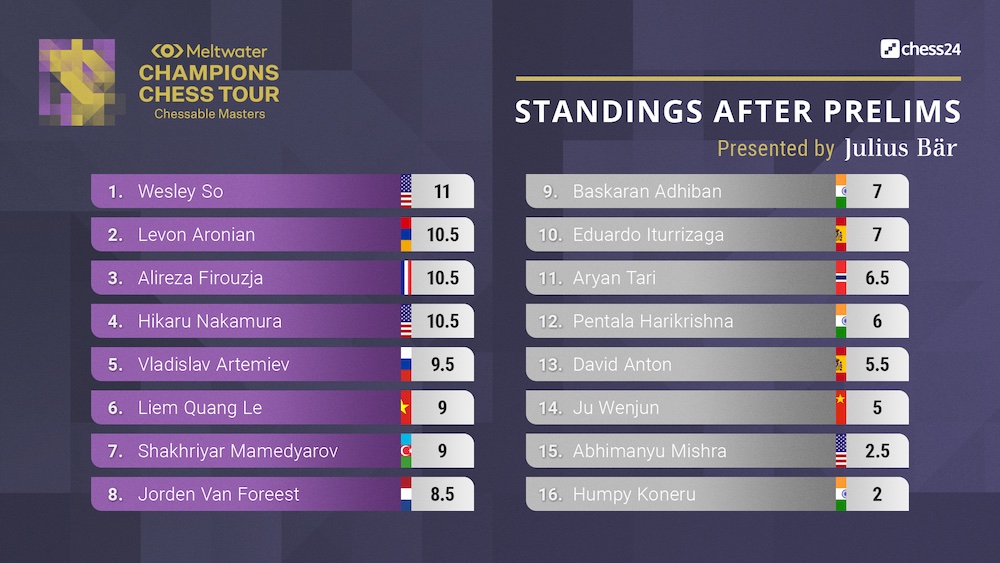 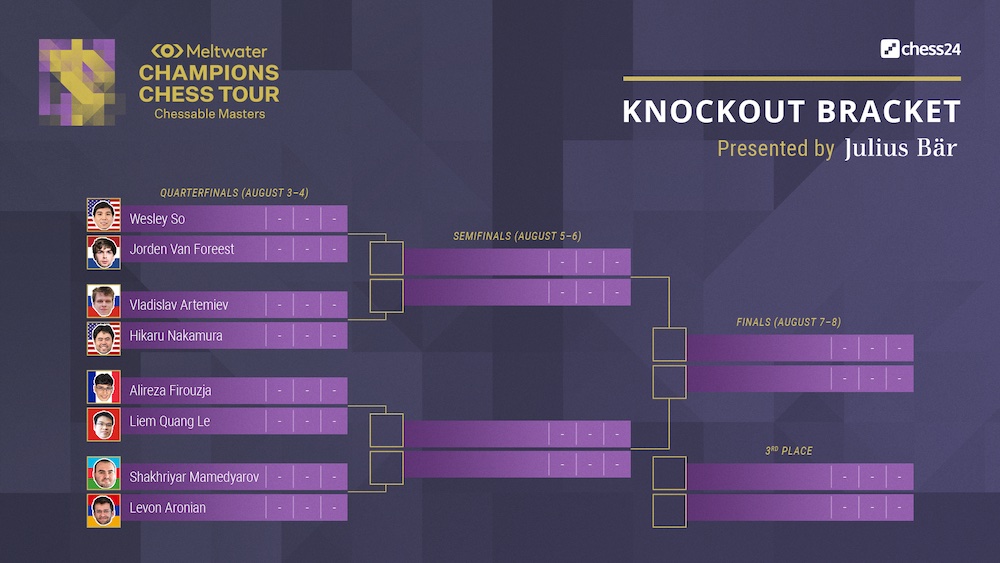 As you can see, from the knockout stages the tournament is going to be very tough for everyone, but given the clash with the World Cup the Prelims had a wider range of players than usual. Alireza Firouzja was glad to have got into the knockout “convincingly” for the 1st time, and when asked why confessed:

First of all, if we want to be real, the tournament was much easier than the other ones!

It’s true that the knockout regulars were largely able to ease into the quarterfinals, with Alireza Firouzja scoring 5/6 at the end. Vladislav Artemiev, who had potentially looked in some danger, also matched that score in the last six games to qualify comfortably.

The leader after each day was Wesley So, who scored +3, then +2, then +2 again, without losing a game. In fact Hikaru Nakamura was the only other unbeaten player. Wesley’s first place in the Prelims ensured a maximum 10 points, and he said he’s keen to try and catch Magnus in tour points, adding, “I was very inspired because Magnus is busy doing other things”.

By the end of the day we’d find that the Top 8 were exactly the same as after Day 2, but the drama involved Adhiban and Jorden van Foreest. Adhiban started the day with a spectacular win over 12-year-old Abhimanyu Mishra, even if he missed a chance to play one of the most beautiful moves you’ll ever get to play.

He then went on to beat Jorden in Round 12, taking a half point lead. It looked like we were in for a chase, but in the next round Adhiban lost to Firouzja while Jorden beat Mishra. Jorden then made two 14-move draws, while Adhiban stumbled to another two defeats. The last one came after Levon did something Adhiban hadn’t in the event — played "Adhiban's" 1.b3!

The win wasn’t exactly down to the opening, but by that stage Jorden’s draw had already secured a quarterfinal against Wesley So. Jorden explained that sometimes you have to do what it takes to qualify.

There were some bright spots on the final day for the other players. Women’s World Champion Ju Wenjun won games against David Anton and Humpy Koneru, while the youngest grandmaster in history also had something to shout about.

12-year-old Abhimanyu Mishra held a draw against the formidable Vladislav Artemiev, but the game he won’t forget in a hurry is beating his sometime coach and world no. 21 Harikrishna. Mishra was dominating early on, but in the end it became an absolute thriller. Mishra’s joy and relief at the end was obvious.

Mishra explained afterwards that he’d mainly concentrated on classical chess and not rapid so far in his career, but he was thrilled to get to play some of his heroes.

It’s a dream come true to play in this event, to play against the players I’ve been looking up to for a long time. It’s fun, as their resourcefulness is simply amazing…

Abhimanyu Mishra is one for the future, but in the quarterfinals we have some of the strongest rapid players in the world right now. The knockouts begin on Tuesday, with live commentary from 17:00 CEST.