16-year-old Praggnanandhaa beat Magnus Carlsen on Day 2 of the Chessable Masters, though the Indian prodigy said he didn’t want to win by a one-move blunder. Magnus shrugged off that loss with two wins (one with 1.c3) that put him in second place, alongside David Anton, while Wei Yi remains out in front on an unbeaten +5. His final win of the day ended a 3-game winning streak that made Jorden van Foreest, who started in last place, the day’s top scorer. 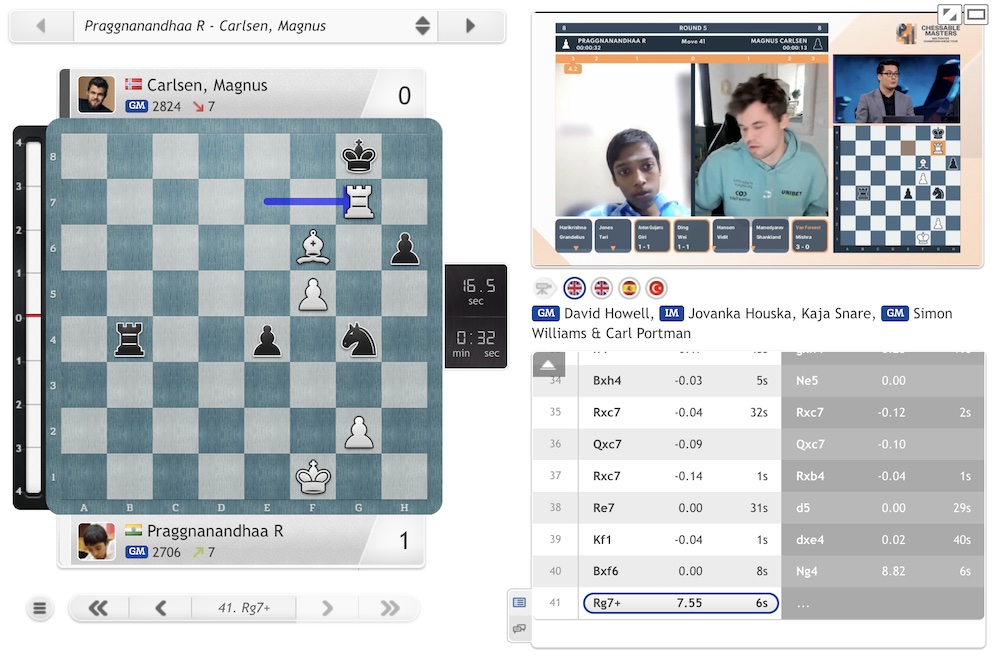 Pragg does it again!

You can replay all the games from the Prelims of the Chessable Masters, the 4th event on the $1.6 million Meltwater Champions Chess Tour, using the selector below.

…and from Daniel King and Andras Toth.

Praggnanandhaa does it again

Praggnanandhaa is back on course to qualify for the Chessable Masters quarterfinals after picking up two wins on Day 2. The most convincing by far was the victory over Gawain Jones, but the one that will get all the headlines was taking down World Champion Magnus Carlsen for the second time in four months.

It was a tense battle in which Pragg initially had the upper hand, but he remained absolutely objective afterwards.

I did not want to win that way! He just blundered in a move. I think otherwise it should have been a draw at the end.

If Pragg had mixed feelings about the win, his more experienced colleagues tend to have no regrets about grabbing such free points!

No real harm was done, however, as Magnus hit back by beating an even younger player, 13-year-old Abhimanyu Mishra, a victory he accomplished in some style.

With the rook trapped on h8, and queens about to disappear from the board, the rest of the game was very easy for Magnus. Mishra would suffer four defeats, and slip out of the qualification spots, after his heroics the day before.

The World Champion, meanwhile, could afford to squander a completely winning position against Harikrishna before continuing his project of playing all the legal first moves in a game of chess with 1.c3 against Sam Shankland.

When 1…d5 2.d4 followed it wasn’t the most exciting start to a game, with IM Andras Toth even describing the white setup as “gutless”... but things would later escalate fast!

That win saw Magnus end the day in second place, where he was joined by Spanish no. 1 David Anton, who ground out wins against Aryan Tari and then, impressively, against Praggnanandhaa.

Pragg would sum up that game and his day:

I feel White has something there, but with less time it’s not easy to find, and then I got outplayed… To be honest, I’m not so thrilled about my game quality, because I’m missing some stuff, some tricks and some tactics at times. Tomorrow I need to be sharper and alert throughout the games.

Pragg’s focus isn’t only on chess, with his next school exam coming up on May 25th. He added:

Fortunately for me I have this study break during exams. I’m using it to play this tournament!

Two players dropped out of the Top 8 on the 2nd day of the Chessable Masters, Mishra and Shankland, and they were replaced by Praggnanandhaa, who we’ve already seen, and the man of the day, Jorden van Foreest. Jorden had a terrible first day, losing three games, drawing one and ending in bottom place on just one point.

Midway through the first round of Day 2 it seemed things might go from bad to worse, as he was in real trouble against Abhimanyu Mishra, but he not only survived but ultimately went on to win.

Here Mishra could have made a relatively easy draw with 50…Kd7! since after 51.Bxc5 h2 the h-pawn will cost White a piece. 50…Kb7? was natural, “stopping” the pawn, but after 51.Bxc5 h2 52.Rf7+ the problem is clear — White promotes the b-pawn with checks, and checkmate to follow.

In the next game Sam Shankland’s 22.Rc7? was a losing blunder, since 22…e5! both attacked the c7-rook and enabled the d5-bishop to defend the f7-pawn. 23.Rxe5 looks spectacular, but was born of desperation.

23…fxe5! 24.Bxe5+ looks scary, but works just fine for Black. There was nothing wrong with Jorden’s 23…Bxd2, however, which also got the job done.

Jorden was on a roll and went on to score a smooth win over Vidit, with the three wins, at three points for a win, making him the day’s top scorer. He met his match in the final round of the day, however, when he faced tournament leader Wei Yi.

The 22-year-old started with a quiet draw against his Chinese colleague Ding Liren, before scoring a powerful win over Eric Hansen that started with a very early h4-h5 and ended with total dominance on both sides of the board.

Wei Yi then faced Shakhriyar Mamedyarov’s trademark 3.g4!? and, despite getting a clear advantage, couldn’t quite squeeze out a win. That didn’t discourage him, however, and in the final game of the day he flawlessly converted an endgame advantage to end Jorden van Foreest’s winning streak.

Wei Yi, interviewed at around 4am in China, revealed that he’d been taking the tournament seriously.

I think I made a lot of preparation. For example, about one week ago I changed my time to sleep. I want to play better the tournament. I also analysed some openings of my opponents.

Wei Yi was keeping his feet on the ground.

The standings look as follows with 7 rounds still to go. 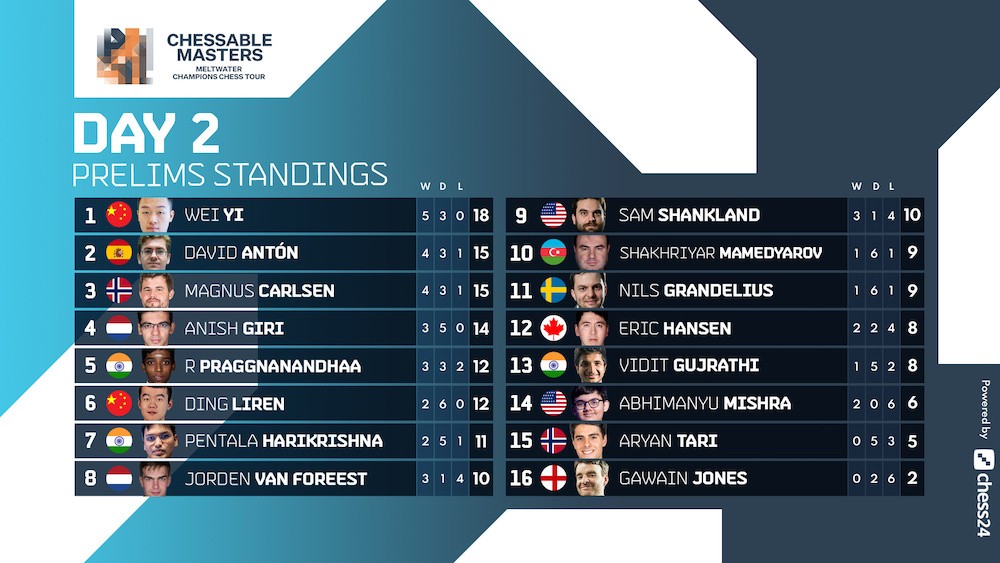 Wei Yi opens Day 3 against Abhimanyu Mishra before ending the day against Magnus Carlsen, though the key battles will take place elsewhere. The odds of qualification to the quarterfinals currently look as follows:

Don’t miss all the Chessable Masters action here on chess24 from 18:00 CEST!