“Tied for first, tied for last, it’s just a matter of one game!” That was how Anish Giri summed up a strange first day of the Chessable Masters B Group, where each of the five rounds featured a single win. Ian Nepomniachtchi and Fabiano Caruana (twice) had taken the lead only to go on to lose the very next game, with MVL and Anish Giri finding themselves top of the table when the music stopped. Only Teimour Radjabov is badly adrift, but anything could still happen. 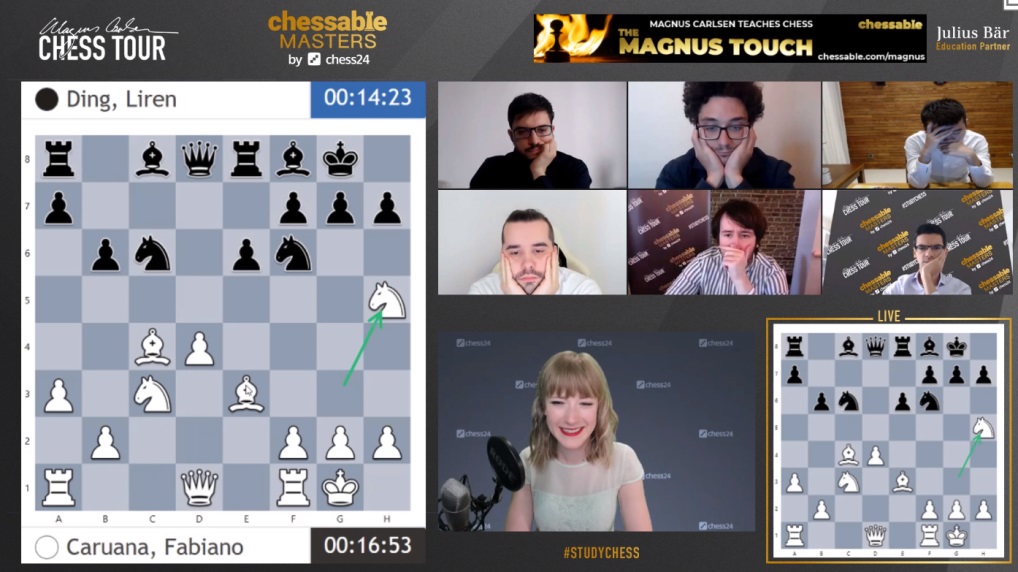 The B Group turned out to be as tight as expected

You can replay all the games from Day 2 of the Chessable Masters using the selector below (click on a result to open the game with computer analysis):

And here’s the day’s commentary from Yasser Seirawan, Peter Svidler and Anna Rudolf:

It left the standings in the B Group as follows: 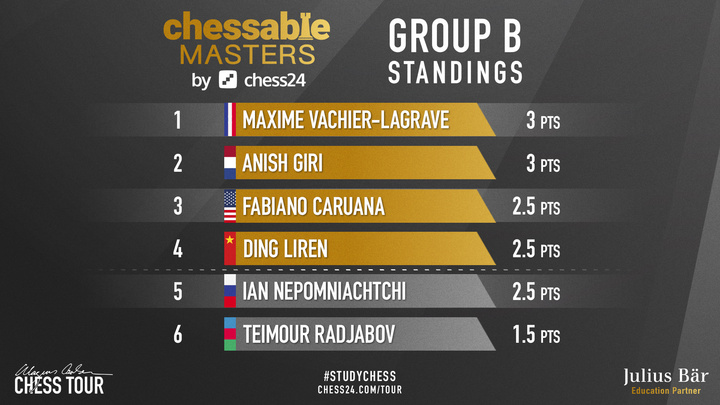 Honestly I think maybe the organisers will have second thoughts about the format, because in fact 50% is pretty much a guarantee to qualify, which is definitely – I shouldn’t be the one saying it – but it’s definitely not ideal. I am not aiming for it by no means, I never do, it just comes to me by itself, but obviously the system which rewards safe play is not ideal. But it’s only the qualifying phase. Basically that ensures that everyone’s really solid, myself included, but also my opponents.

Anish no doubt has a point when it comes to the approach of some of the players, but on the other hand, it’s worth pointing out that Ian Nepomniachtchi is currently on 50% but would be out if the preliminaries stopped now. It was the same for the Lindores Abbey Rapid Challenge, where Alexander Grischuk failed to make the quarterfinals as the unlucky one of three players on 50%.

Let’s get to the action, focusing on that one win each round!

The main weakness of French no. 1 Maxime Vachier-Lagrave has generally been held to be his extremely narrow (but deep) opening repertoire, where you could rely on him always starting games with 1.e4 or the Najdorf or Gruenfeld with Black. In the Candidates Tournament it took him halfway to a match against Magnus, but since chess moved online he’s decided to experiment with new openings. Still, no-one expects the Bird!

Yasser had a chance to regale us with one of his stories:

Maxime’s experiments haven’t been a resounding success, however, and this was no exception, though Giri did feel Maxime could have played on rather than taking a draw at the end.

22.Nxb4! was a strong exchange sacrifice by Nepo, giving up the rook on f1, but far from the almost forced win he later made it appear!

Round 2: Caruana takes over

Early on in the day it was a liability to be the leader, with Nepo immediately getting taken down by world no. 2 Fabiano Caruana. The position was already very tough to play for Black when Nepo allowed the crushing blow 35.Re8!

There was no way for Black to cut his losses, since after 35…Qd7 36.Rxc8 g5 Fabi had 37.Qd2!, hitting the undefended a5-rook and giving White time to keep all the material. The game dragged on to move 64, but the outcome was never in doubt.

That was one of Pascal Charbonneau’s Tactics of the Day:

In would be wrong to interpret the draws elsewhere as mere “solidity”, since Radjabov-MVL, for instance, saw a razor-sharp ending. MVL’s 45…d4? (45…Ke5!) was a blunder, but after 46.Re8? (46.Kg6!) he got to demonstrate it was a blunder with a beautiful point:

That was Pascal’s endgame of the day!

Round 3: MVL is the day’s 3rd sole leader

Sure enough, Fabiano’s reign lasted just one round, and the game he lost to Maxime Vachier-Lagrave was the crowning achievement of the day. Both kings played an active part in a complicated middlegame until Caruana’s got burned:

Peter Svidler had found the mate before it appeared on the board!

Pascal shows us the complete game:

Elsewhere both Ian Nepomniachtchi and Ding Liren could have regrets about a tense battle that ended in a draw.

Round 4: MVL ends the curse | Fabi keeps on bouncing

MVL was the first leader who managed to avoid defeat, though only just! He looked in real trouble against Ding Liren but managed to steer the game to a draw that ended in bare kings on the board on move 54.

That wasn’t enough to keep the sole lead, however, as Fabiano Caruana hit back to defeat Teimour Radjabov. The Azerbaijan star seemed to have saved a tough position when he reached a position with Rook against Rook and Bishop, but as so often, especially at fast time controls, the side with the extra piece managed to weave a mating net:

Round 5: Giri at the death

There was time for one last twist, just when it seemed Anish was heading for an inevitable end to his first day:

For the first 13 moves the game curiously followed a game Peter Svidler had lost with White to Vasyl Ivanchuk 12 years ago: 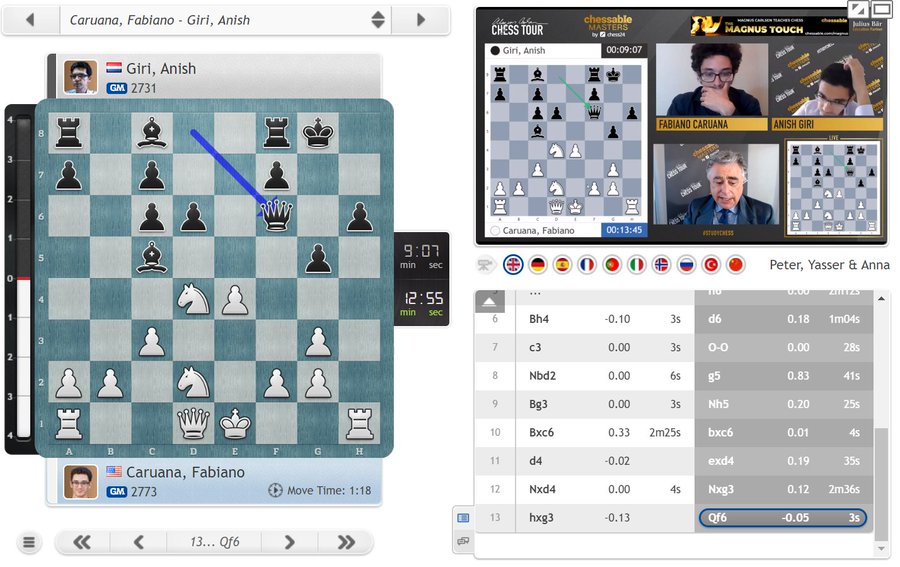 Asked afterwards if he’d known about that, Anish responded, “I only know your great wins, not your losses!”

It was to be another win for Black, however. In what was already a tough position for Caruana, Giri’s 25…Rfb8 set a couple of traps:

The one Fabiano must have seen was that Rxa4 is now threatened, with bxa4 leading to Rb1# The way he dodged that, however, was disastrous. 26.Nc5? fell for almost the same trick, since 26…Rc4! was simply winning the knight:

Again, you can’t take the rook due to that pesky threat of mate on b1.

That game put Anish Giri in a great position to qualify for the quarterfinals, and he was grateful for the gift from Fabi… on Father’s Day:

He was also grateful that he’s not playing on Monday, when we instead see Group A completed:

Anish will have the chance to follow the fortunes of his friend Magnus Carlsen and five more players fighting for four places in the quarterfinals. 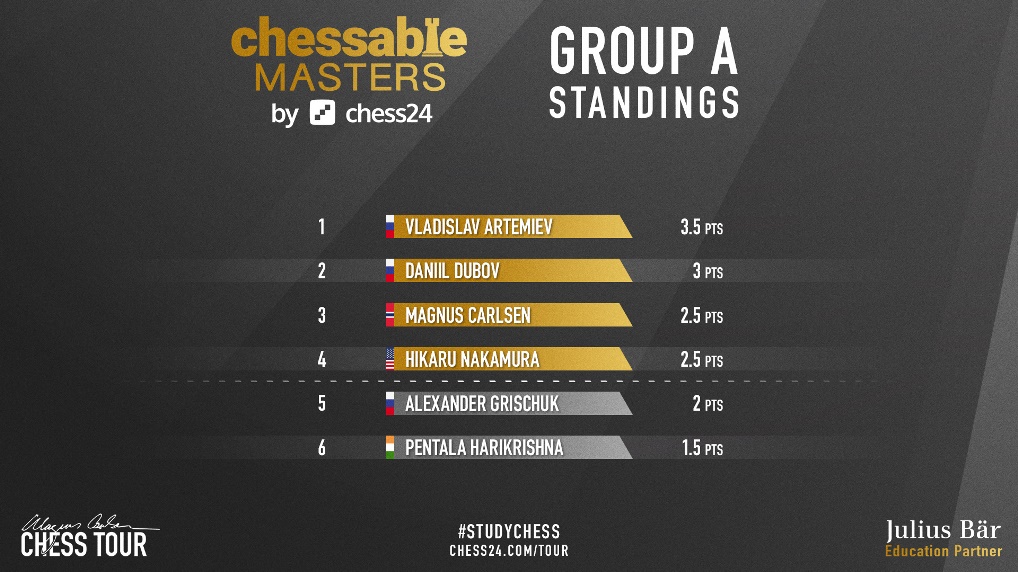 Here are all the pairings: