Wesley So still leads the Chessable Masters after Day 2, but he’s now followed just half a point behind by Levon Aronian, who stormed up from 10th place to 2nd after scoring 4.5/5. Liem Quang Le is level with Levon after scoring the day’s second best score of 4/5, while Shakhriyar Mamedyarov played some spectacular chess on the way to scoring 3.5/5 and climbing from 9th to 5th. Of course for some to climb others must fall, and David Anton plunged from 6th to 13th after failing to score any points on Day 2. 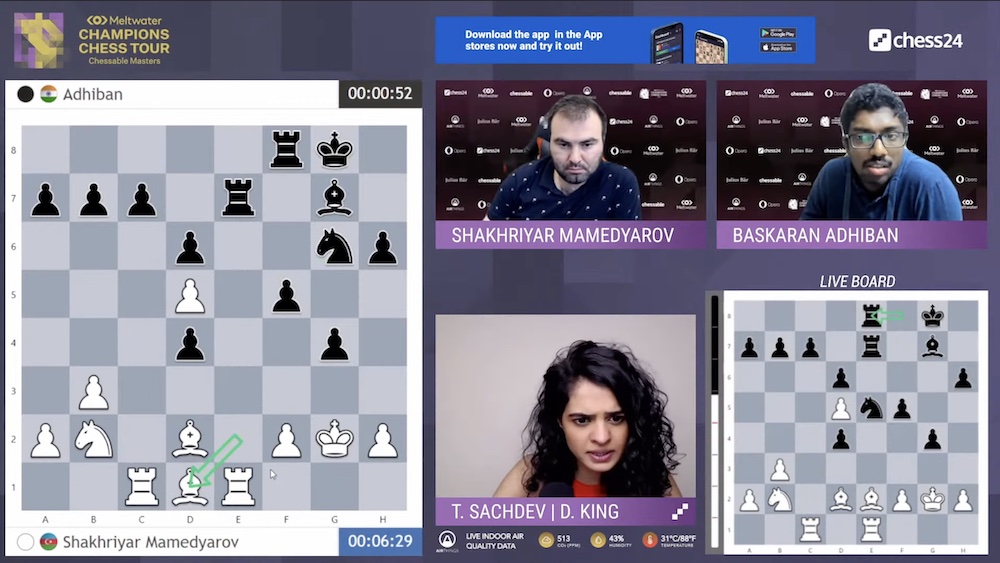 Mamedyarov-Adhiban was one of the day's wildest games

You can replay all the games from Prelims of the Chessable Masters, the 8th event on the $1.6 million Meltwater Champions Chess Tour, using the selector below.

And here’s the day’s live commentary from Tania Sachdev and Danny King.

And from Kaja Snare, Jovanka Houska and David Howell.

Levon Aronian started the Chessable Masters with 0.5/2, and even winning the last two games of the first day left him in 10th place, outside of the eight qualification spots for the knockout. Day 2, however, couldn’t have gone better, as he stormed up to second place. 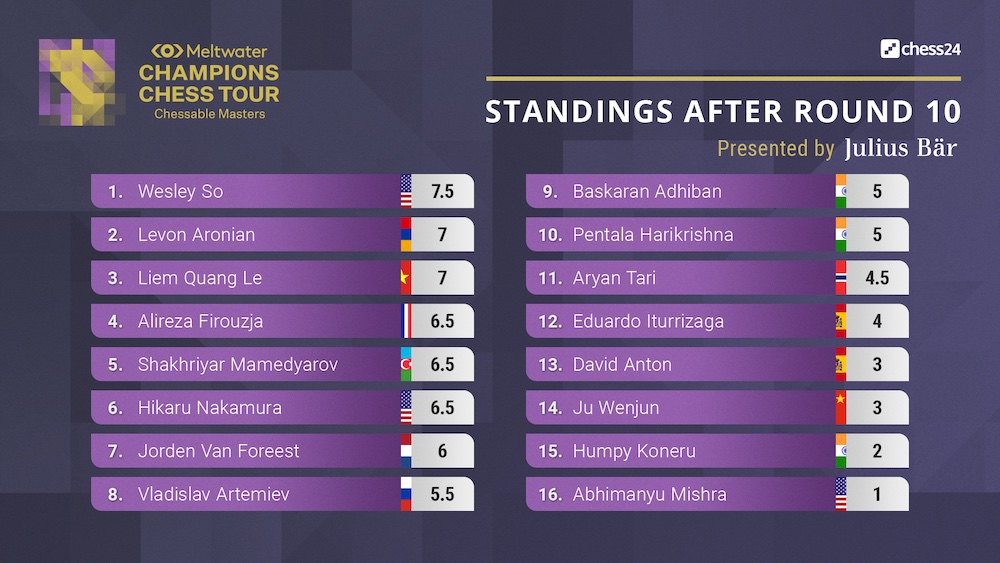 Levon started with a thumping win over Eduardo Iturrizaga…

…and then never looked back, conceded just one draw.

Yeah, it was a perfect day. After yesterday’s shaky start I think I managed to regroup.

How was he able to come back?

It’s understanding that I’m a human being and I can play badly and just forgiving myself for that and just concentrating on the next day. That’s one problem I used to have. I used to be very unforgiving to my own mistakes. Now I’m a little bit older, so I more or less understand that although I have great respect towards my chess, still I believe it’s normal to make mistakes.

Wesley So still leads after scoring 3.5/5, though there was one near miss! He allowed Vladislav Artemiev the amazing shot 30…Bg3!

31.hxg3 hxg3 and the pawn will take the rook on f2. 31.Nd1!? by Wesley was no improvement, but in fact he went on to win the game after Artemiev blundered his queen in the final position. Last event’s finalist Artemiev scored 2/5 for the day, and is in some danger of missing out on qualification.


Another big winner of the day was Liem Quang Le, who won the first three games of the day before slowing down with two draws. His third win was against Shakhriyar Mamedyarov, who otherwise had a great day. Shakh got to crash through with a mating attack against 12-year-old Abhimanyu Mishra…

…while in the final game of the day, Mamedyarov met his soul-mate Adhiban, who went for a wild knight sacrifice.

His main regret afterwards was that he’d spent four minutes before taking the plunge and not just gone for it immediately!

In the end, however, it was Mamedyarov who emerged victorious, even if his initial “refutation” of the sacrifice certainly wasn’t the one the computer was recommending.

I think it’s my minus I never can play strategic chess, my chess is for the attack, I never think about draw!

Long may it continue!

Another player who likes to attack is Women’s World Champion Ju Wenjun, though understandably, given the ratings of the players in the event, she’s had a tough time. On Sunday, however, she drew from a position of strength against Wesley So, escaped against Aryan Tari and got to give checkmate against Mishra. 2/5 was a score that matched Artemiev and Adhiban.

Ju Wenjun was also facing the challenge of playing in the early hours of the morning, commenting, “It’s not my best time to play chess, but still I find a lot of joy!”

Monday’s Day 3 is when things get serious, with eight players set to be knocked out while the remaining eight go forward to the knockout. Don’t miss live commentary from 17:00 CEST.