Wei Yi beat Harikrishna, Gawain Jones and David Anton to lead on 10/12 after Day 1 of the Chessable Masters, ahead of Ding Liren, Anish Giri and Magnus Carlsen, who all scored two wins and two draws. 13-year-old Abhimanyu Mishra, who’s vowed to break Wei Yi’s record as the youngest player ever to cross the 2700 barrier, was the other star, as he picked up wins over Eric Hansen and Shakhriyar Mamedyarov, while also having Ding Liren on the ropes. 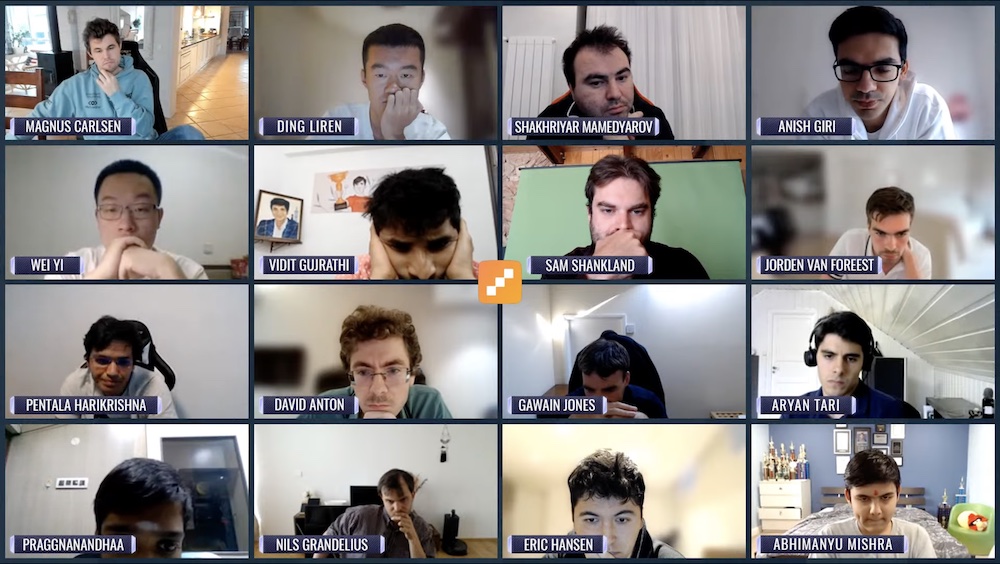 You can replay all the games from the Prelims of the Chessable Masters, the 4th event on the $1.6 million Meltwater Champions Chess Tour, using the selector below.

…and from Jan Gustafsson and Daniel King.

Wei Yi reminds us just how good he can be

Wei Yi is still the youngest player ever to have crossed the 2700 barrier, a feat he pulled off as a 15-year-old, and although in the 7 years since he’s failed to enter the absolute elite, he showed on his Meltwater Champions Chess Tour debut that he’s still a formidable player.

On Day 1 of the Chessable Masters he demonstrated sophisticated opening preparation, bold strategy and, of course, sharp tactics. After a draw against Praggnanandhaa in Round 1 he broke through against Harikrishna, spotting the crucial details in advance.

At the end of the game Wei Yi showed confidence in going for a pure queen vs. rook endgame. As our commentators pointed out, it’s an ending that’s very hard to win against a computer, but one you usually win without too much trouble against a human. As if on cue, Gawain blundered a fork that ended the game.

In the final round of the day Wei Yi faced his co-leader and another tactical beast, David Anton. The Spanish star had earlier beaten Mishra and then spotted a trick against Sam Shankland.

The Wei Yi-Anton clash was predictably chaotic, but in the end it was Wei Yi who triumphed with White, spotting in the final position that the bishop on d5 is overloaded — it can’t both defend the queen and the f7-square.

Carlsen, Ding and Giri in the chasing pack

Three of the major favourites are well-placed to qualify to the knockout stages after starting with two wins and two draws to leave them two points behind Wei Yi. 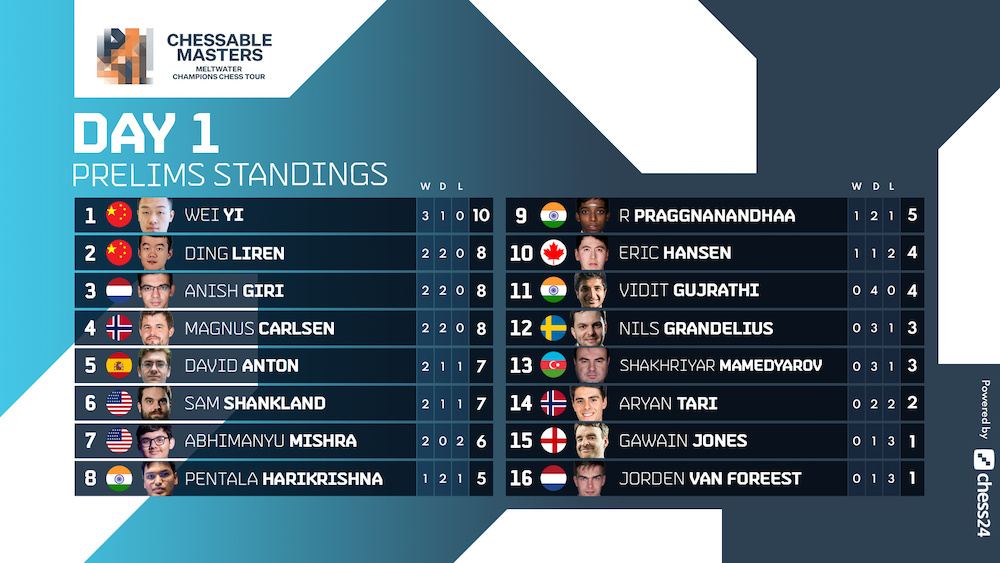 Magnus Carlsen got off to a somewhat shaky start, with the computer claiming the position was winning for Norwegian no. 2 Aryan Tari, before he closed the queenside with 17.a5!?

By the end of the game “closed” was something of an understatement!

Magnus then failed to get revenge on Shakhriyar Mamedyarov for the final round of the Oslo Esports Cup, but would have more success when he faced his World Championship seconds. First up was Nils Grandelius, who was surprised on move 6.

Magnus nevertheless went on to win in 30 moves, and his final win of the day, over Jorden van Foreest, was much smoother, with the World Champion describing it as “pretty much an opening disaster” for his opponent. Magnus had some regrets about how he wrapped things up, but commented overall:

Yeah, the score is good and to end on a high note with two wins is nice. I think I didn’t play so well, but as long as I win it’s fine!

Jorden van Foreest had the toughest of days, starting by stumbling into a mating net against Ding Liren just when he seemed to be taking over. 33.Ba7 attacked the c5-rook…

…before escaping with a draw against both Sam Shankland and Vidit. Once again Ding Liren, like Wei Yi, is starting each day’s action at midnight.

Anish Giri is the other player in the chasing pack, and in fact he could easily have ended the day tied for the lead. After a quiet draw in the first game he decided to mix things up against Praggnanandhaa.

In the middlegame he gave up his queen, before getting to crack his young opponent’s resistance in style. 31…g5? only seemed to defend against White’s threat.

Giri was completely winning the 3rd game against Harikrishna but lamented:

The 3rd game it was a pity, because I had a position where it is so beautiful — everything is perfect! The problem is that you have to win it, that’s the only problem. And to win it you have to make it a little bit less perfect, but it’s always hard.

Giri made up for that by winning the final game of the day against Gawain Jones, despite realising that objectively the opposite-coloured bishop endgame had at some point been drawn.

Sam Shankland also picked up two wins on his 2022 Tour debut, but it was the remaining player to score two wins who stood out.

Abhimanyu Mishra has a day to remember

When Abhimanyu Mishra played the 2021 Chessable Masters as a 12-year-old he started with four losses, and only finally won a game in Round 14. He may have feared a repeat when he began the 2022 event with a tough loss to David Anton and then collapsed in a promising position to lose to Ding Liren as well.

It all turned around in Round 3, however, when he outplayed Eric Hansen with the black pieces, won a piece, and confidently converted.

That already matched the win that Mishra had scored in the 2021 Chessable Masters, but he immediately doubled his win tally in the final game of the day. The opening had been a triumph when he played 20.Bxe5!

He was in for a shock, however, when Shakhriyar Mamedyarov went for 20…Bh3!?, an echo of the move Magnus had missed. Abhimanyu commented:

The opening went very smoothly, but then after Bxe5 he played Bh3 and I just completely didn’t see this, and I saw that it was very crazy and I was very close to getting mated.

21.gxh3?? Qf3+ and Black does deliver checkmate, but after 21.Bg3! it was Shakh who got carried away with 21…Bxg2+?, a piece sacrifice that was never quite working. That didn’t mean it was easy to meet:

When Mishra managed to exchange queens he was in less immediate peril, but he could only finally breathe a sigh of relief when he saw that Mamedyarov had allowed a simple checkmate.

Quite a day for the 13-year-old, who on Friday will face Magnus Carlsen with the black pieces. He’s looking forward to it:

No matter what happens it’s going to be very inspirational, and it’s going to help me improve my chess a lot, because he’s such an inspiration to me. When I was younger, I played a lot of games on the PlayMagnus app, like thousands and thousands, and the way that he plays is just phenomenal.

It’s going to be a day of the youngsters for Magnus, who first faces 16-year-old Praggnanandhaa before the clash with Mishra. Don’t miss all the Chessable Masters action here on chess24 from 18:00 CEST!