Peter Svidler joins Jan Gustafsson, Eric Hansen, Robin van Kampen and Fiona Steil-Antoni for chess24’s English coverage of the World Chess Championship match that starts in New York one week tomorrow. In the run-up to the event the Commercial Court of the City of Moscow has resoundingly rejected Agon’s 20 million rouble lawsuit against chess24 for broadcasting the moves of the Candidates Tournament in March.

The wait is almost over! In a week’s time Sergey Karjakin will face the daunting task of sitting down against Magnus Carlsen, arguably the best chess player of all time. Will he come armed with enough theoretical weaponry and sheer desire to snatch the crown from the champion, or will the Norwegian’s reign go on? We’ll soon find out, and you’ll be able to follow every twist in the tale here on chess24, in the company of a spectacular commentary team. 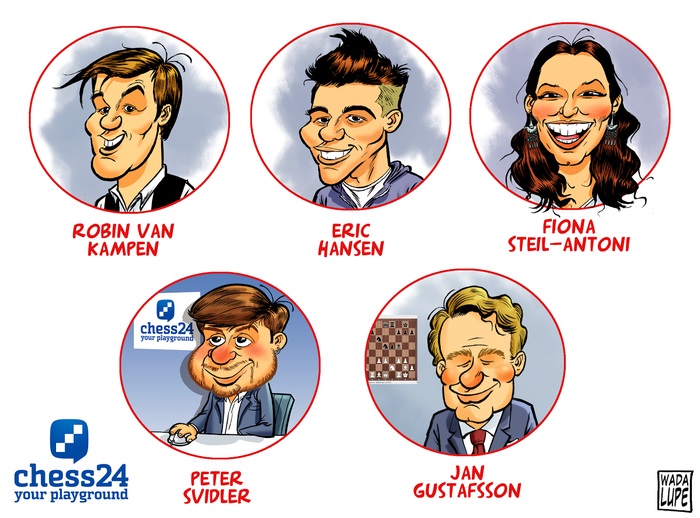 We’re delighted to announce that the mainstay of our coverage, potentially commentating on nine games plus tiebreaks, will be many people’s pick as the best chess commentator out there: Peter Svidler. He’s joined by chess24’s own Jan Gustafsson and Fiona Steil-Antoni, with Fiona planning to do feature segments during the shows.

We also have new faces, though. Ok, Dutch GM Robin van Kampen is already a chess24 author and commentated on the final rounds of the Candidates, but for the first time he’s joined here by his Canadian “Chessbrah” Eric Hansen. With Svidler playing in the European Club Cup the young duo will get the ball rolling, as you can see in our provisional schedule (games start at 14:00 in New York or 20:00 CET):

We’ll also be broadcasting in German... 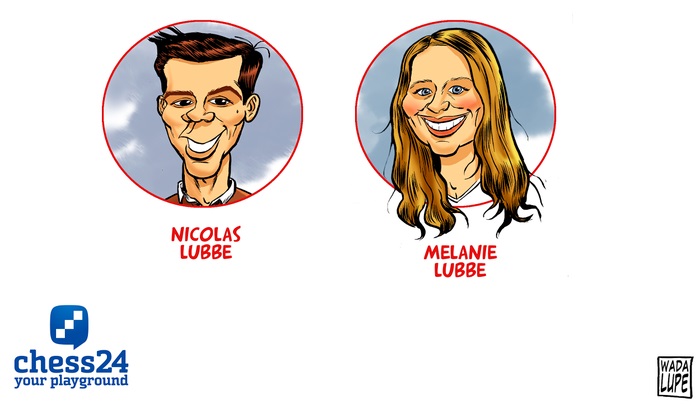 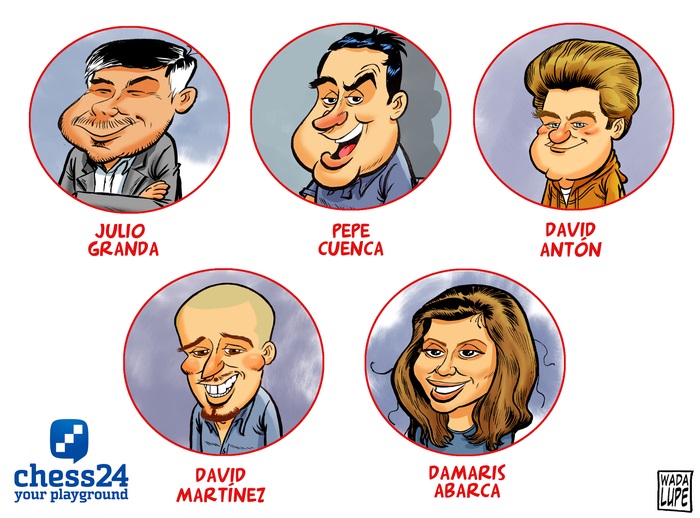 ...while recap videos, news and more should combine to make it a hugely enjoyable chess event.

We won’t, of course, have video footage of the players since, as in other sports, video from the venue belongs to the organiser, which brings us to that other topic threatening to overshadow proceedings…

We’ve kept very quiet about the controversy over broadcasting live moves from the Candidates Tournament, believing the chess public isn’t gullible and can see through PR bluster, while the best place to respond to legal threats is in court, if it comes to that.

Eventual winner Sergey Karjakin and our commentator Peter Svidler before Round 1 of the 2016 Candidates Tournament in Moscow | photo: Colin McGourty

It did, and earlier this year Turnir Pretendentov LLC (a company set up by Ilya Merenzon and a lawyer – the name is the Russian for Candidates Tournament), sued eLearning Ltd (a Gibraltar company owning chess24’s intellectual property) for 20 million roubles, or around 290,000 euros at current exchange rates. The claim alleged unfair competition based on disclosing trade secrets.

After one preliminary hearing in September the final hearing in the Commercial Court of the City of Moscow took place on 25 October, with the judge announcing his verdict at the end. He rejected chess24’s motion to cease proceedings based on the court lacking jurisdiction, but then went on to reject Agon’s claim in full. The written verdict was available on the court’s website within two days: 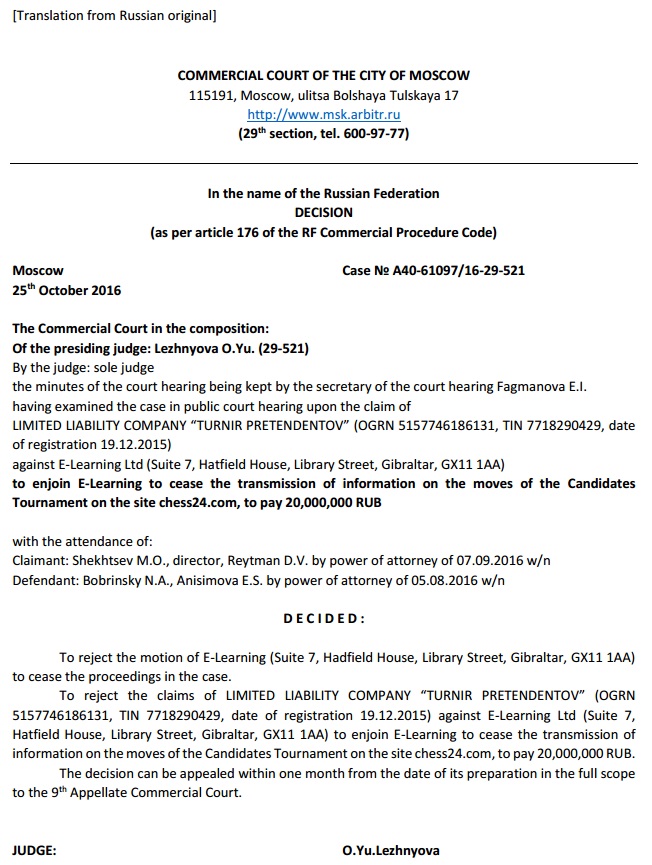 Then on 1 November the court published its reasoning, where it upheld all the arguments made by our lawyers about the case except for the question of jurisdiction. It runs to 12 pages of legal Russian, but here’s a translation of the summary on why the court took its decision:

Having studied the submitted documents in the case file, having heard the arguments of the representatives of the parties, the court came to the conclusion that the claims in the lawsuit were unfounded since,

The details are mostly of interest to lawyers but, in short, the verdict couldn’t have been clearer. The losing side now has 30 days to file an appeal before it’s possible to claim back substantial legal fees. As far as we’re aware, hearings are still pending in the cases involving ChessGames (17 January 2017) and ChessBomb (28 February 2017).

Dangerous moves... not so long after taking this photo yours truly had to leave the venue (and, on legal advice, the country) after having accreditation withdrawn. It may now be safe to return to Russia :) | photo: Colin McGourty

We’re delighted to have won and thank our lawyers Taylor Wessing and Secretan Troyanov Schaer. This action wasn’t taken lightly - we’ve worked with Agon before and would work with them again - but for the sake of chess and chess fans we couldn’t back down. Put simply, you can no more stop people reporting a Magnus Carlsen move than a Lionel Messi goal. An Agon win would have established a dangerous precedent.

And so we move to New York, and the upcoming Carlsen-Karjakin World Championship match. It seemed at first that by adopting a pay-per-view model and allowing other websites to show the moves Agon had decided to let the chess take centre stage this time round. Instead we got a sting in the tail - if you embed their "widget" you can't provide a broadcast of your own, while if you don't embed the widget it's again a blanket ban.

Needless to say, that once more went down like a lead balloon with the chess community (see e.g. the English Chess Forum, Chess.com, Quality Chess…), and it will be a great shame if legal threats get in the way of the hugely enjoyable exchange of views we had on social media and elsewhere during the 2014 Carlsen-Anand World Championship match. We’re not alone in believing Agon has taken a wrong turn, while it's hard to find any organisers who agree that restricting chess moves, even if legal, would be the path to sponsorship and profits.

Malcolm Pein of the million dollar Grand Chess Tour put the case eloquently when he explained their reasoning for sharing even the video of games:

chess24 will again defend itself if required, but we sincerely hope Agon will steer clear of legal actions that would again waste time and money that could instead be invested into chess. 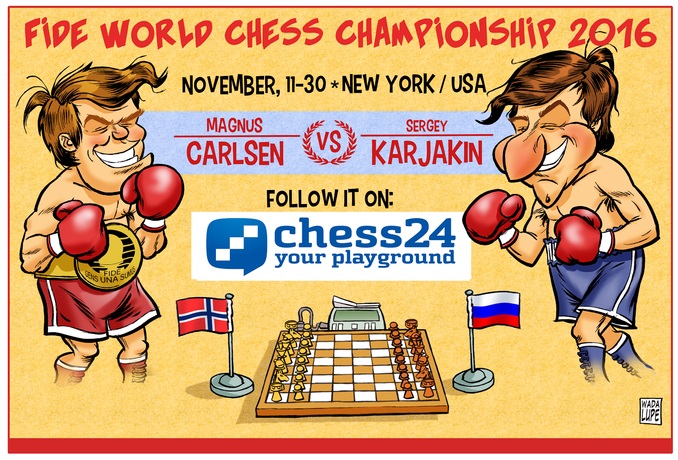 So then, there’s just a week until the most anticipated chess event of 2016! We hope you’ll choose to watch it with us here on chess24, while to warm up we’ll have the European Club Cup (MVL, Kramnik, Aronian, Svidler…) and the Champions Showdown in St. Louis (Anand, Topalov, Caruana, Nakamura). It’s going to be a great month of chess!