World Champion Magnus Carlsen will be joined by his great predecessors Vishy Anand and Vladimir Kramnik for the chess24 Legends of Chess, the 4th and final event before the Grand Final of the $1 million Magnus Carlsen Chess Tour. Boris Gelfand, Vasyl Ivanchuk, Peter Leko and Peter Svidler are the other legends invited to take part alongside qualifiers Anish Giri, Ian Nepomniachtchi and Ding Liren. The event runs from Tuesday July 21st to Wednesday August 5th. 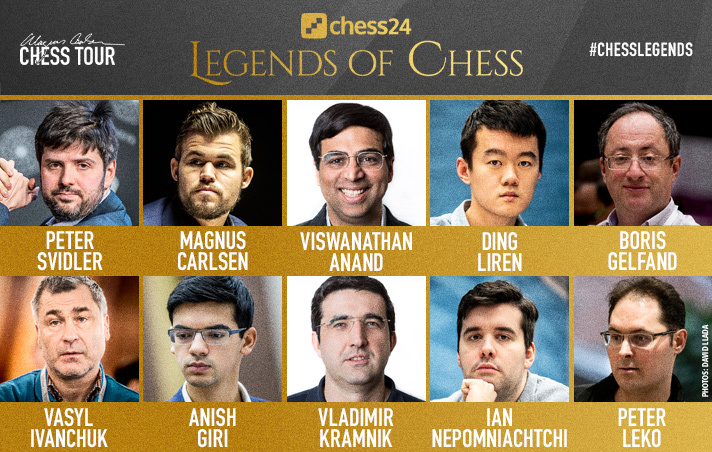 The chess24 Legends of Chess is a 10-player super-tournament with a twist. The four semi-finalists of the Chessable Masters — Magnus Carlsen, Ding Liren, Ian Nepomniachtchi and Anish Giri — received an automatic invite, making the tournament’s top seeds four hungry Top 10 players in the prime of their chess careers, aged 26-30.

Up against them are six legends aged 40-52, who have been at the top of world chess for two and in some cases well over three decades (the age here is when the event begins — Nepo's birthday is tomorrow!).

All are still active players, with Vladimir Kramnik alone in announcing his retirement, but only from classical chess. The Russian grandmaster took bronze in the 2019 World Blitz Championship, behind Magnus Carlsen and Hikaru Nakamura. He commented:

I am glad to get a chance to play some chess online thanks to the efforts of chess24 to keep it going during this strange and uncertain time. I hope my play will not be too disappointing, but in any case I will enjoy every minute and every game of this wonderful event!

The legends include the 15th World Chess Champion, Vishy Anand, who snatched the crown from Vlad in a tournament in 2007 and then confirmed his title by winning their match in 2008. The Indian legend commented:

I am looking forward to returning to the chessboard and particularly excited to participate in this inter-generational challenge.

The field also features two players who narrowly lost matches for that undisputed title. Peter Leko was a draw against Kramnik away from the title in 2004, but lost the final game, tied the match and missed out on the old rule that the holder retains the title in case of a level score. The Hungarian is also looking forward to the challenge:

It is a great honour to be part of this truly unique event. A battle of the generations and clash of different playing styles makes for a wonderful mix at the Legends of Chess.

I am delighted to take part in the forthcoming Legends tournament. Looking forward to playing chess against great masters!

Those players are joined by the mercurial Vasyl Ivanchuk, runner-up to Ruslan Ponomariov in the 2002 FIDE World Championship and winner of both the World Rapid and Blitz Championships, and Peter Svidler, World Cup winner, 8-time Russian Champion and commentator extraordinaire.

Why do I want to play in a chess legends tournament? My main answer is very simple! I just want to play chess against exciting opponents and I want to enjoy it! In draughts, it is quite common for players to wish a good game for your opponent just before the start — I want to do it too! So I hope we have a good time — not only all the players, but the organisers and spectators too! I do not have a lot of experience in online tournaments, everything I have played before has been a maximum of two days long. So, it gives me a nice feeling that I am almost a beginner! But in casinos, beginners have success quite often! Is online chess similar to a casino somehow? I do not know, but we will find out soon, I hope.

The chess24 Legends of Chess will begin with a 10-player round-robin preliminary stage played over the first 9 days, with each match best of four 15+10 rapid games. If tied 2:2 we’ll get an Armageddon game, where White has 5 minutes to Black’s 4, but a draw means Black wins the match. There are 3 points for a win without Armageddon, while if the match goes to Armageddon the winner gets 2 points and the loser 1.

The top 4 then go forward to a knockout, with the semi-finals and final played as best of 3 sets, and each set a 4-game rapid match. The only difference to the preliminary stage clashes is that if a match finishes 2:2 there will also be two 5+3 blitz games before Armageddon.

Each day starts at 16:00 CEST and you can download the full regulations here.

FIDE is proudly supporting the chess24 Legends of Chess, which starts a day after Monday July 20th, International Chess Day and FIDE's 96th anniversary — read more about that celebration here.

The longer preliminary stage in the Legends ensures that we’ll get to see matches between all the participants, including the World Championship rematches Carlsen-Anand and Kramnik-Anand as well as matches we’d have loved to have seen such as Carlsen-Kramnik and Kramnik-Ivanchuk. 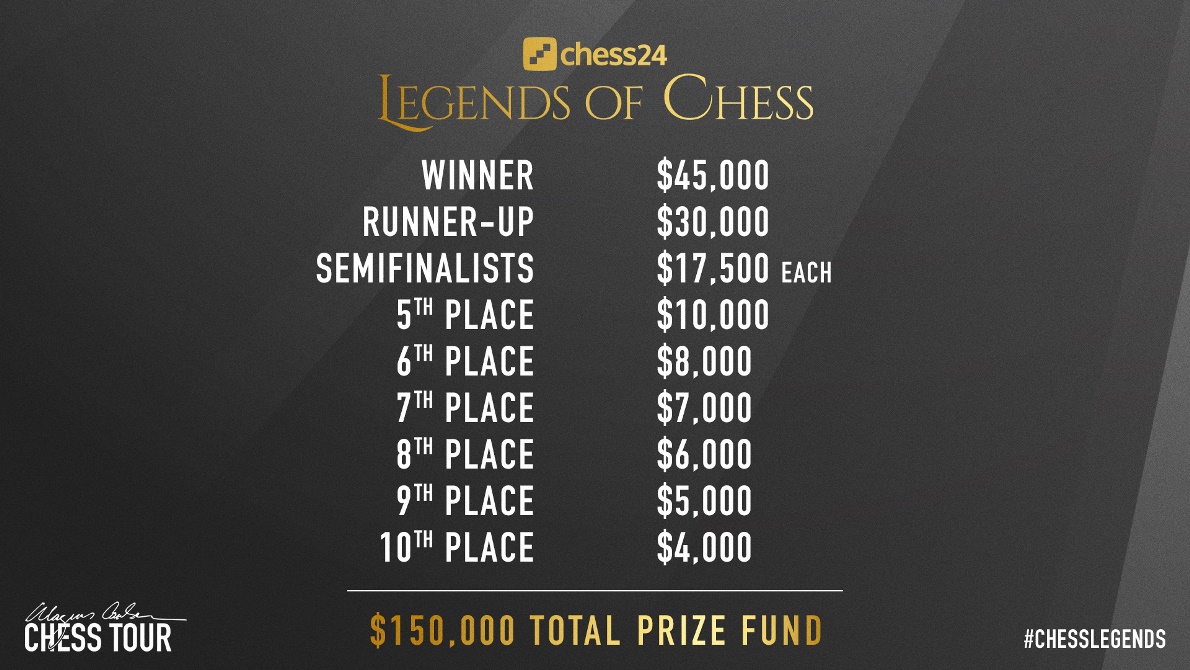 Also at stake are places in the $300,000 Grand Final of the Magnus Carlsen Chess Tour that will begin just four days after the end of the chess24 Legends of Chess. The two players so far confirmed for that 4-player event are Magnus Carlsen and Daniil Dubov. 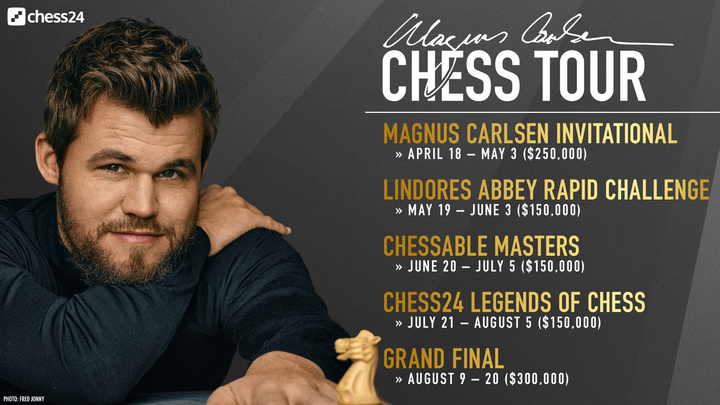 Once again it’s simple — if a player wins he automatically qualifies, meaning that the legends have a clear path to the final despite only playing in this one tournament. As well as that, Magnus Carlsen winning two tournaments (the Magnus Carlsen Invitational and the Chessable Masters) has opened up at least one space to the highest scoring non-winner on the tour. Currently that would go to Hikaru Nakamura (23 points = 10 points x 2 as a runner-up + 3 points as a quarterfinalist) who is just ahead of Ding Liren (21 points = 7 points x 3 as a semi-finalist).

As Ding plays in the chess24 Legends he can guarantee a place by getting to the Final 4, while if either Magnus or Ding win the tournament then Hikaru would join them and Daniil Dubov in the Grand Final.

We’ll once again have live coverage here on chess24 in 10 languages, with more legends of chess dropping into the live commentary. Before, during and after the event the players will also be playing Banter Blitz or taking part in Question & Answer sessions — challenging the players, asking questions or watching the Q&As is reserved for chess24 Premium members. It's going to start with a bang, with Anand, Ivanchuk and Kramnik lined up for Saturday to Monday.

Now's a great chance to Go Premium as the voucher code CHESSLEGENDS gives you 40% off!