Today we’re proud to announce that chess24 has merged with Play Magnus, the Norwegian company behind a family of apps building on the brand of World Chess Champion Magnus Carlsen. Play Magnus and chess24 will continue to operate independently online, but with our joint resources and know-how we believe we’re better equipped than ever to provide the very best possible chess experience. 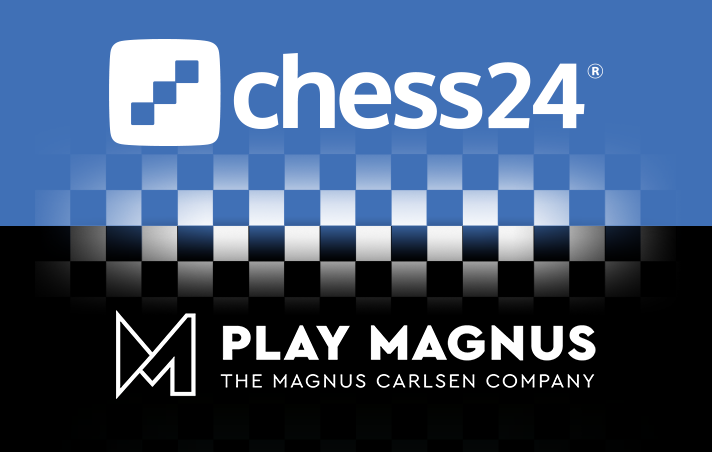 After months of behind-the-scenes hard work it finally became official today that chess24 and Play Magnus have merged. It was a landmark in the story of two companies that have been shaking up the chess world since 2014.

chess24 was born out of a discussion between successful business owner and chess fan Enrique Guzman and Grandmaster Jan Gustafsson, after they first met in the Hamburg Chess Club. Jan was interested in a small chess video website, but Enrique persuaded him to think bigger and aim to build the world’s best all-round chess platform.

chess24 launched in February 2014, with Vishy Anand and Peter Svidler among the star names whose video series were immediately available. Broadcasting over 600 live games each round as the official website of the Tromsø Olympiad was a baptism of fire later that year, and since then time has flown by! Millions and millions of games have been played in the Playzone, Peter Svidler told Lawrence Trent “that’s not how chess works”, and we’ve watched as the young Magnus Carlsen defended his World Championship title three times. Who can forget Jan and Peter’s commentary on the final stages of the victory against Sergey Karjakin in New York in 2016?

Play Magnus, meanwhile, first launched their eponymous app in January 2014. The beautifully simple idea was that you could play against an AI version of Magnus Carlsen that would play as the World Champion did at different ages. A beginner could beat 5-year-old Magnus, but even the real Magnus would struggle against the latter ages!

That app inspired users to improve their chess… but how? Well, one way was by using the follow-up Magnus Trainer app, while to first get kids involved in chess there’s now the fun and highly-acclaimed Magnus’ Kingdom of Chess.

The merger of the two companies is the start of an exciting new chapter in both stories, and there are a lot of plans we'd love to be able to tell you more about... but that's for a later date! For now we can reassure you that chess24 will still be as free as ever to criticise the chess or life choices of Magnus (really, how did he fall for Jan’s time zone excuse for needing to be in Thailand during the World Championship!?). Carlsen has great influence in the chess world, but as the World Champion and arguably greatest player of all time rather than as one of a number of shareholders in the merged company. His focus will be firmly on his chess career.

We do hope, however, that we’ll get to see him in action from time to time here on chess24! On our 5th birthday he took on Peter Svidler in a match, and last Friday he played his first Banter Blitz:

At the end he announced, “for all of those who challenged me and didn’t get the chance you will get another chance, so don’t worry,” and those weren’t empty words. Magnus will be back at 18:00 CET on Wednesday 20th and Sunday 24th March, so stay tuned to our shows page to catch the action and your chance to challenge MagzyBogues!