Magnus Carlsen, Vishy Anand, Ding Liren and Sergey Karjakin will this weekend play each other twice in rapid chess in the Lindores Abbey Chess Stars tournament. The event, which will be broadcast live via chess24 with commentary by Danny King, sees chess return to the 12th century Lindores Abbey over 500 years after monks were recorded as having chessboards in their possession. A limited edition £150-a-bottle chess-themed Scotch whisky has been released to mark the occasion. 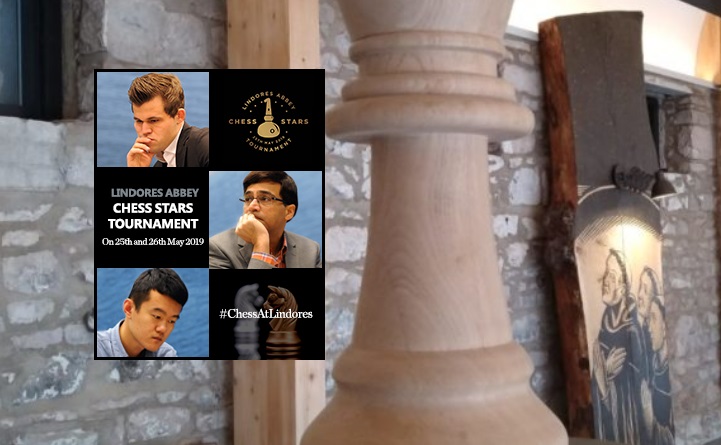 The Lindores Abbey Distillery, on the south bank of the River Tay in Fife, Scotland, is one of the most unusual venues we’ve ever seen for a chess tournament.

The Distillery was opened in 2017 opposite the ruins of Lindores Abbey, which was founded in 1191 but abandoned during the Protestant Reformation in the 16th Century. Five kings are said to have walked in the grounds of the abbey, and one, James IV, is recorded in 1494 as ordering enough acqua vitae to make 400 modern bottles of whisky.


It’s highly likely that the Tironensian monks in Lindores were involved in the distillation of whisky, but it seems they mixed their hard liquor with chess! A 1480s inventory of the abbey refers to, “twa pairs of thabills wt thair men’, which translates in modern English as ‘two chessboards with their pieces’.

Helen McKenzie Smith, the custodian of the Abbey with her husband Drew, comments:

It is an absolute honour for Lindores to host these grandmasters. We are thrilled to be welcoming some of the greatest chess players that the world has ever known to the abbey and the distillery, and to be bringing the game of kings back to the ancient abbey after a hiatus of more than 500 years. The monks who lived and worked here were recorded as being great chess players, so we feel this tournament is a fitting tribute to their history.

The word “Thabill” (chessboard) has been adopted for the “Lindores Abbey Thabill”, a Scotch whisky (or aqua vitae) commissioned to commemorate the chess tournament. There’s a limited edition of 500 bottles, available to purchase for £150, though you can also find some much cheaper souvenirs.

But now let’s get to the chess! The format is a 4-player double round-robin, with six rounds of rapid games played at a time control of 25 minutes for all moves with a 10-second increment per move. If there’s a tie for first place we’ll get a playoff with 3+2 blitz. You can find all the pairings – it’s Karjakin-Anand and Carlsen-Ding Liren in Round 1 – here.

The Norwegian World Chess Champion is one of three players in the event who will be playing in Altibox Norway Chess shortly afterwards (only Karjakin misses it), and it’s been a very busy schedule for Magnus of late! On Wedneday May 22nd he was in Copenhagen for the Energi Danmark Champions Battle, where he took on 24 players in a simul and then played two rapid games against 14-year-old Danish talent Jonas Buhl Bjerre. You can rewatch the full show, including commentary by Jan Gustafsson and an interview with Magnus and Brain expert Peter Lund Madsen, below:

And here are the games – yes, Magnus was his usual ruthless self as he scored 26/26!

Magnus also recently dominated in the Abidjan Grand Chess Tour event, and we can expect him to be aiming to drain all the water of life out of his opponents in Scotland.

49-year-old 5-time World Chess Champion Vishy Anand will be playing in Scotland for the first time!

The Indian star has nothing left to prove in chess, but though his results have become more erratic of late he can never be written off. He used to be the undisputed king of speed chess and as recently as December 2017 won the World Rapid Championship. 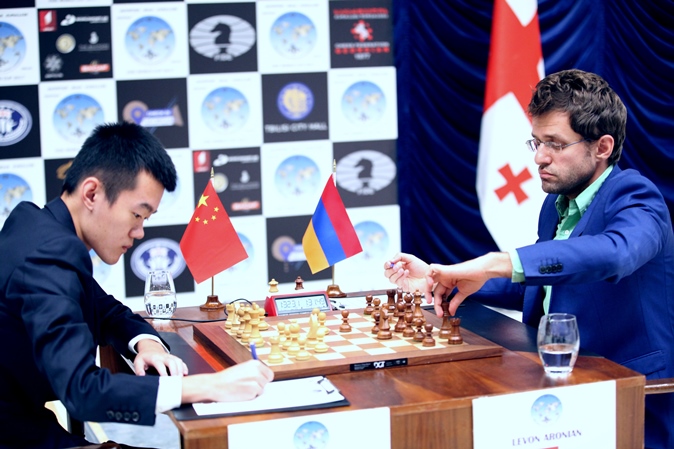 World no. 3 Ding Liren is currently the clear favourite to qualify by rating for the 2020 Candidates Tournament, the gateway to a potential title match against Magnus later in the year. While the 26-year-old is not considered a specialist at the faster forms of the games it’s worth noting that he drew against Carlsen and beat Karjakin when they met in the rapid section of the recent Grand Chess Tour event in Africa.

2016 World Chess Championship runner-up Sergey Karjakin noted that playing in Scotland was the silver lining of getting knocked out in the first round of the Moscow FIDE Grand Prix, since Ian Nepomniachtchi and Daniil Dubov were also ready to play depending on how far they progressed in the tournament.

Karjakin has won both the Rapid and Blitz World Championships, so is quite capable of winning the event if he hits top form.

The schedule is to play three rounds on both Saturday and Sunday, at 13:30, 15:00 and 16:30 local time (so starting at 14:30 CEST). English Grandmaster Danny King will be leading the commentary, and you can watch all the action LIVE with the chess24 system on the official website. Don’t miss it!