Wesley So looked on course to move to 4/4 in Millionaire Chess in supreme style, but when his Round 4 attack ran out of steam Azerbaijan’s Vasif Durarbayli took control and seized the lead alongside Le Quang Liem, Evgeny Bareev and Yu Yangyi. Hikaru Nakamura has conceded one draw, Fabiano Caruana two, while Gata Kamsky came two minutes too late to his Round 4 game and suffered a forfeit defeat. 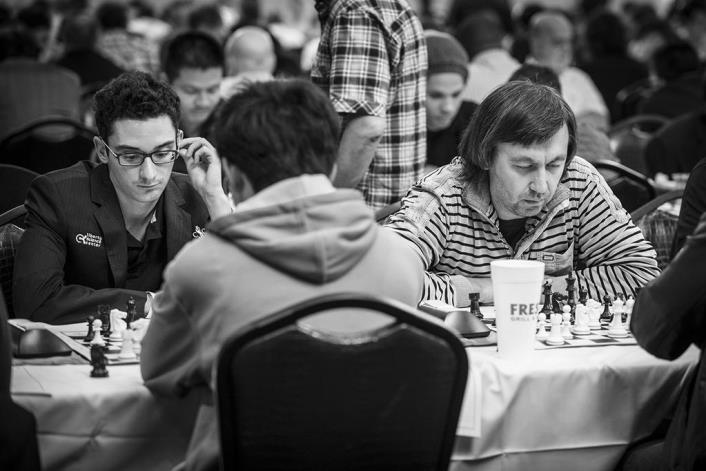 Caruana and Kamsky have both had a bumpy ride so far in Millionaire Chess | photo: David Llada, official website

There’s little margin for error in Millionaire Chess. In order to make it to Millionaire Monday and a chance to win the $100,000 first prize you need to finish in the top four after only seven rounds, and judging by last year the minimum score that will give you a chance is 5.5/7. After only two days and four rounds all of the top three seeds have dropped points.

You can replay all the games so far using the selector below – and note if you hover over a player’s name you’ll see his or her results so far:

Wesley So was going through the tournament at whirlwind pace, smoothly beating much weaker opposition on the first day and then starting his 22nd birthday by beating the dangerous Italian grandmaster Axel Rombaldoni with the black pieces. He joined the live show after that success:

Round 4 looked set to be Wesley’s crowning glory as he broke through against 2618-rated Vasif Durarbayli with a beautiful combination:

15.Nxe6!! fxe6 16.Rxe5!! And now if 16…dxe5 then 17.f7+ wins the house. The brilliant moves kept coming, but chess is a cruel game. Durarbayli hung on and eventually inaccuracies crept into Wesley’s game until, very short on time, he found himself in a tough ending:

The passed e-pawn and the huge contrast in the positions of the opposing kings allowed Durarbayli to win with ease and join the leaders on 4/4. 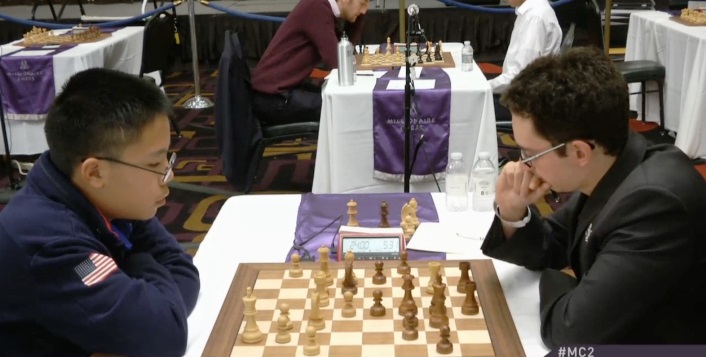 Fabiano Caruana's poker face was failing him, but he still escaped with a draw

Fabiano Caruana hasn’t tasted the bitterness of defeat, but he perhaps owes that to the pragmatism of his 14-year-old US opponent FM Ruifeng Li in Round 2:

Li, who had White, is clearly better and had 17 minutes more on his clock than Caruana (who had only 5 minutes to make 12 moves). Instead of pressing for a win, though, he took a draw by repetition.

That wasn’t the end of Caruana’s struggles, since in the very next round he failed to win a very tricky position against 2462-rated Indian IM Priyadharshan. That pushed Caruana off the live boards, though he did at least restore respectability and keep his Millionaire Monday hopes alive with a win against another US FM, Joshua Sheng, in Round 4. 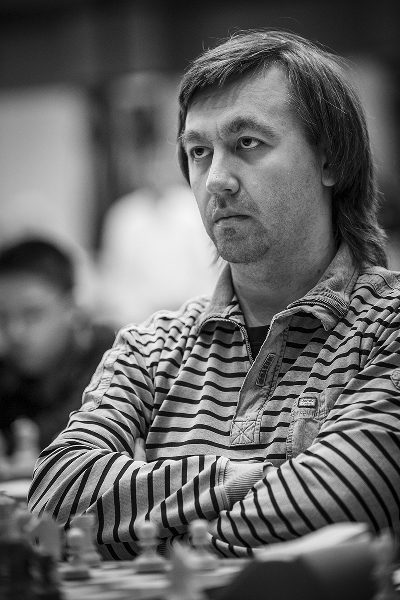 Gata Kamsky also dropped to 3/4, but after three good wins there was no chess explanation for his potentially very costly loss in Round 4:

Hikaru Nakamura, meanwhile, is still well-poised to reach Millionaire Monday. He conceded a half-point to a well-played game by Israeli GM Gil Popilski in Round 3, but has otherwise been in crushing form, handing a tough lesson to 14-year-old prodigy Samuel Sevian in Round 4. 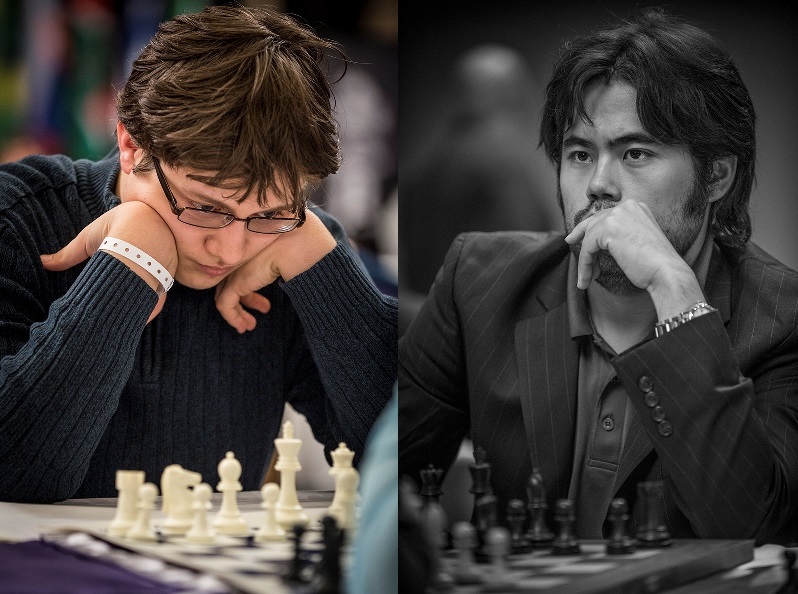 The youngster played a very bold opening, but ended up getting strangled in impressive positional style. The final position (Nakamura, of course, had the white pieces):

The euphoria Gil Popilski felt after drawing against top seed Nakamura almost carried him to victory against Luke McShane, but a great position came crashing down for Popilski as he tried to exploit the Englishman’s time trouble. Afterwards “the world’s strongest chess amateur”, who is half a point off the lead on 3.5/4, joined the live show:

The leaders on 4/4 are Le Quang Liem, who gave up the World Blitz Championship (he won the event in 2013 and finished 4th in 2014) to play in Las Vegas, Russian veteran Evgeny Bareev, So-beater Vasif Durarbayli and Yu Yangyi, who made the semifinals last year. 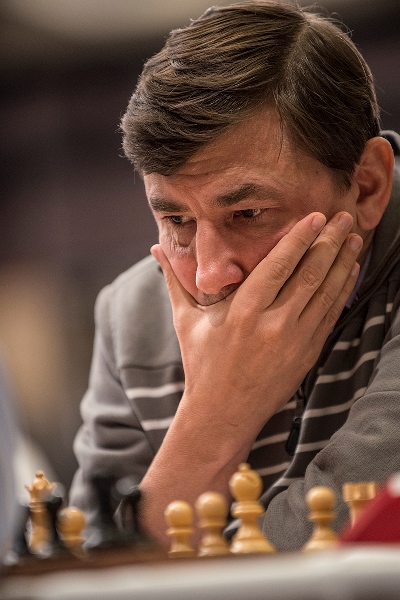 Yu Yangyi has a curious story. In Round 1 he was a beneficiary of one of the more than 30 forfeit wins that arose after a very unfortunate mistake – the wrong player list was used to determine the pairings, with players like Wang Hao, who had dropped out of the tournament before it began, still paired. Then in Round 2 he was mistakenly paired down on board 48 against a player who had lost in Round 1. Still, the Chinese player has the class to have been expected to come through his first two games with wins regardless! 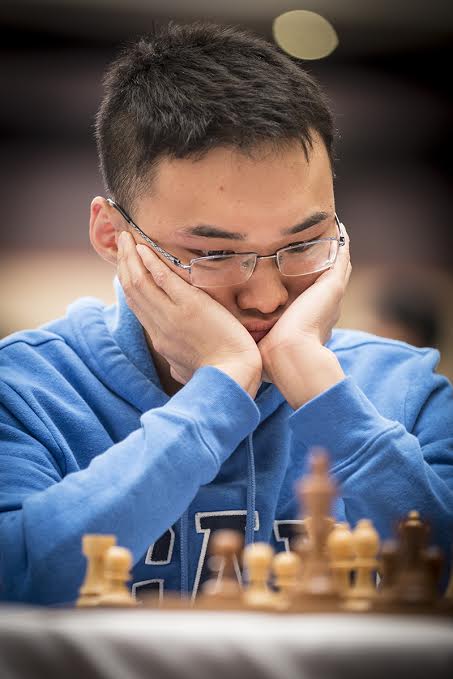 One of the great appeals of the event in Las Vegas so far has been the video coverage that starts two hours after each round begins. The idea of the Confessional Box has been taken over from events in Norway and the Sinquefield Cup, and works well with a wide range of players. Here, for instance, you can see German IM Max Meinhardt (who has done live shows for chess24) and a jetlagged Chinese player whose appearance you won’t want to miss:

One player who was unhappy about his opponent not being penalised based on the touch-move rule would have made Muhammad Ali proud with the way he ended his interview by Maurice Ashley:

The range of players has definitely surpassed what you see in your average chess tournament!

More videos can be found here, while you can catch all the action live here on chess24, with another two rounds this Saturday (and Sunday morning in Europe).