Chess.com, the world’s largest chess website, has acquired Play Magnus Group, a leading chess entertainment and education company that includes Chess24. The proposed acquisition was initially announced on August 24, 2022 and was unanimously recommended by Play Magnus Group’s board. After receiving regulatory and shareholder approval, the acquisition officially closed on December 16, 2022. By sheer coincidence, on the same day, Chess.com reached 100,000,000 members, another major milestone in the site's history. 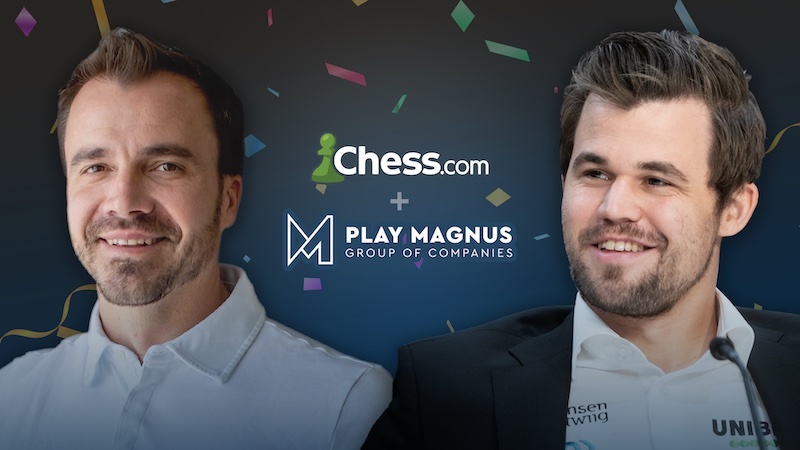 In association with the acquisition of Play Magnus Group, Magnus Carlsen has signed on as a Chess.com ambassador and will be competing regularly in Chess.com events such as the Speed Chess Championship, where on December 18, 2022, Carlsen contested the 2022 Speed Chess Championship Final which saw a thrilling, down-to-the-wire performance by Hikaru Nakamura. More than 200,000 viewers tuned in to watch this highly anticipated matchup.

Chess.com announced the acquisition during their "State of Chess.com" live stream on December 21, 2022 where Chess.com Chief Chess Officer Daniel Rensch was joined by guests including Magnus Carlsen, Andreas Thome, CEO of Play Magnus, and Geert van der Velde, Chessable CEO, to discuss the acquisition and plans for the future, and to take questions from the chess community.

Chess.com's CEO, Erik Allebest, Danny Rensch, and Andreas Thome had the following to say about the acquisition.

“Chess.com is 100% focused on our mission of serving the chess community and growing the game. I believe that joining Chess.com and Play Magnus Group together is the best way for us to achieve that mission. The future for chess is insanely bright, and as a fan I can’t wait for the amazing content, events, and products that are coming.” - Erik Allebest, Chess.com CEO

"I can’t wait for the amazing content, events, and products that are coming." - Erik Allebest

“At the center of our goals for chess has always been to improve the livelihoods and opportunities for chess professionals. Bringing the best of what the chess world has to offer together — from top players, to creators and streamers, to authors — makes me more excited than I’ve ever been about where the chess community is headed and what we can achieve together!” - Danny Rensch, Chess.com CCO

“Play Magnus Group was created with the mission of enabling more people to play, watch, learn and earn a living from chess. I’m proud of our efforts in driving innovation in chess, and developing great products, events and services enjoyed by millions. As Play Magnus and Chess.com begin our journey together, we are extremely excited for the future of the game of chess.” - Andreas Thome, Play Magnus CEO

"Play Magnus Group was created with the mission of enabling more people to play, watch, learn and earn a living from chess." - Andreas Thome

About Chess.com: Chess.com is the world's largest chess site with a community of more than 100 million members from around the world playing more than 10 million games every day.

About Play Magnus: Play Magnus Group was founded in 2013 with the goal of making the world a smarter place through chess and established the popular Champions Chess Tour and a suite of entertainment and learning chess products.