“The rumours of my chess death probably have been slightly exaggerated!” said Garry Kasparov as he stormed back to defeat Sam Shankland and Levon Aronian on Day 2 of Chess 9LX in Saint Louis. After being one of just two players not to win a game on Day 1, he was now one of just two players to remain unbeaten on Day 2. The other, Leinier Dominguez, took the lead with a perfect 3/3, defeating Peter Svidler, Shakhriyar Mamedyarov and Hikaru Nakamura. 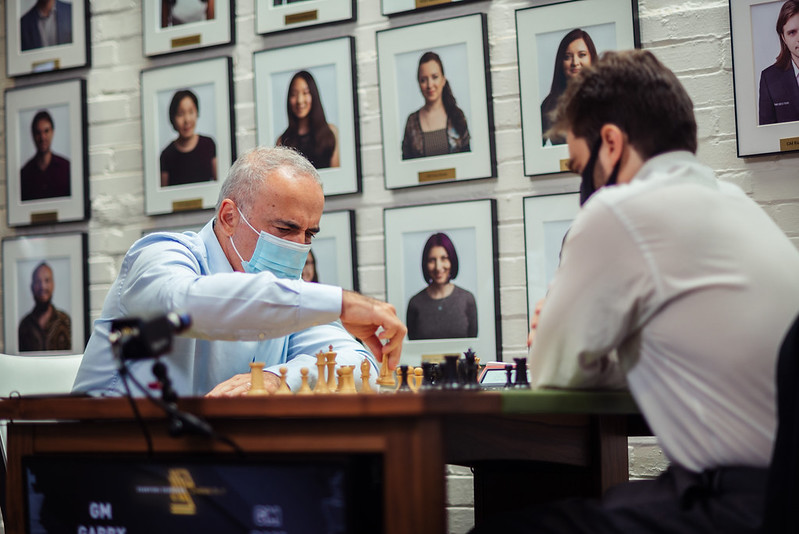 Garry Kasparov was his old self in the win over Sam Shankland | photo: Austin Fuller, Saint Louis Chess Club

You can replay all the games from Champions Showdown: Chess 9LX using the selector below.

And here’s the day’s live commentary from Maurice Ashley and Alejandro Ramirez.

After everything went wrong for Garry Kasparov from the end of his game against Wesley So on the first day of Chess 9LX, the first game of Day 2 acquired great significance. Would the downwards spiral continue, or would Garry hit back?

It was the latter, as Garry was winning within 10 moves and made no mistake in what followed — in fact the commentators felt Garry was having too much fun!

It would be an excellent day at the office…

...and it was great to see Garry relishing the experience in the interviews after it was over. 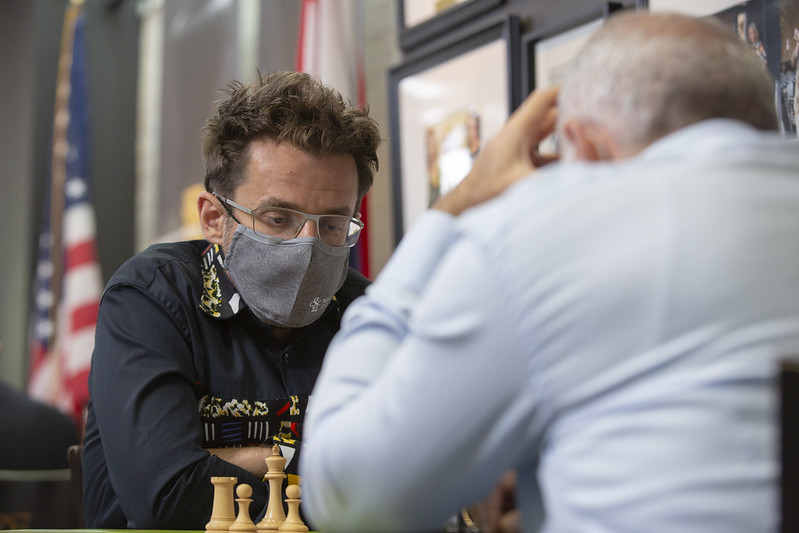 Perhaps the move of the day came against Levon Aronian, when the world no. 5 went for an exchange sacrifice on d5 in order to push his c-pawn.

Garry’s final game of the day was against Fabiano Caruana, who started the day in the sole lead and almost got off to the perfect start against Hikaru Nakamura. Fabi said 24.a4!? was an amazing resource by Hikaru in a lost position, but there was a spectacular refutation — 24...Qe5!! 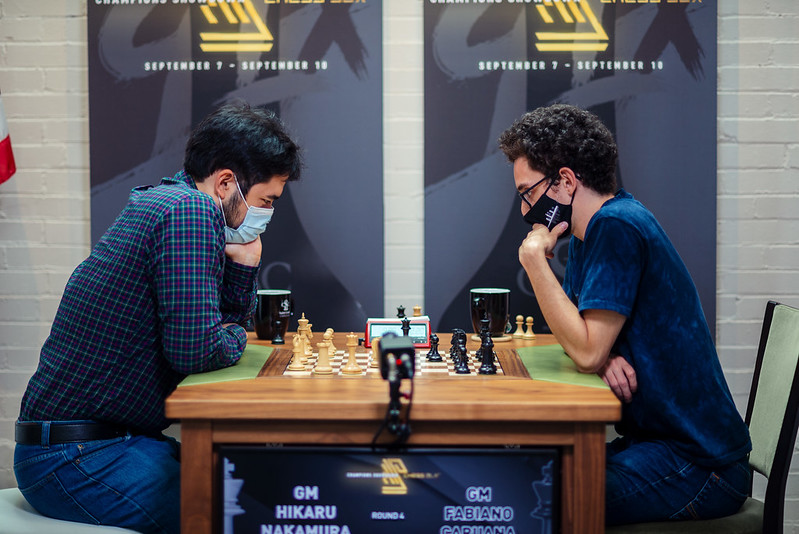 That would have been the second time in two days Hikaru had fallen for such a crushing tactic (as he did against Shankland) and would have meant four losses in a row, but instead after 24…Qa5? 25.Bxg4 Hikaru was on top and went on to win. Fabiano talked about that game afterwards.

It was still a decent day for the world no. 2, however, who ended in sole second place after defeating Maxime Vachier-Lagrave and then drawing against Garry. It looked as though it would be better, as he won an exchange against the 13th World Champion and was close to converting, with a healthy time advantage as well as a great position.

Garry fought hard, however, and made up the time difference, so that Fabi was under pressure when he failed to find the finishing touches.

That might be asking too much for a rapid game, but there were also easier ways to convert after exchanging bishop for knight. Instead Garry’s hustle worked, until Fabiano decided not to risk more and accepted a draw. 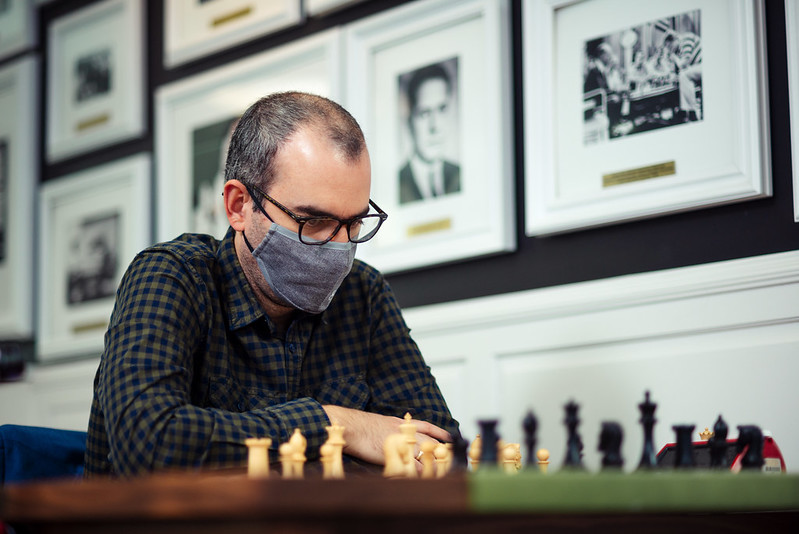 The tournament leader, meanwhile, is Leinier Dominguez, who had an amazingly good day at the office, winning all three games, which made it four in a row.

It wasn’t just the results, but the play, with Dominguez winning all three games in completely convincing style. His day was perhaps summed up by the final move of his game against Shakhriyar Mamedyarov. Shakh unleashed 23.Rxg7+!?

23…Kxg7 runs into 24.Nf5+ and 23…Bxg7 loses the queen to 24.Qxh4. Even in those cases Leinier would be no worse, but he’d seen in advance that he had an icily cool response — 23…Kh8! Down a huge amount of material, it was time for Shakh to resign.

Leinier then spotted a blunder by Hikaru Nakamura and ruthlessly exploited it.

That means Dominguez leads Caruana by half a point, with MVL, Kasparov and Shankland another half point began.

It seems Chess 9LX has barely begun, but it already ends on Friday, with just three rounds remaining. 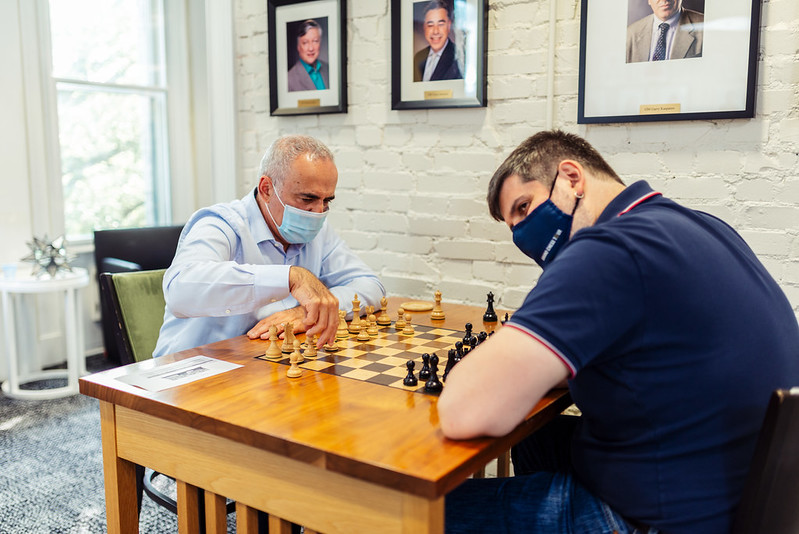 Garry starts the day with the black pieces against Peter Svidler, his main sparring partner for Chess960 — here they are in the 15 minutes the players are given to study new positions | photo: Austin Fuller, Saint Louis Chess Club