Javokhir Sindarov and Jakhongir Vakhidov grabbed the wins as Uzbekistan beat Armenia to take over as leaders of the Chennai Olympiad with two rounds to go. They face the teen stars of India 2 in Round 10 after Praggnanandhaa rescued a draw against Azerbaijan. In the Women’s event Poland’s Oliwia Kiolbasa hit 9/9, gave Poland victory over India, and left a 4-way tie for 1st place. 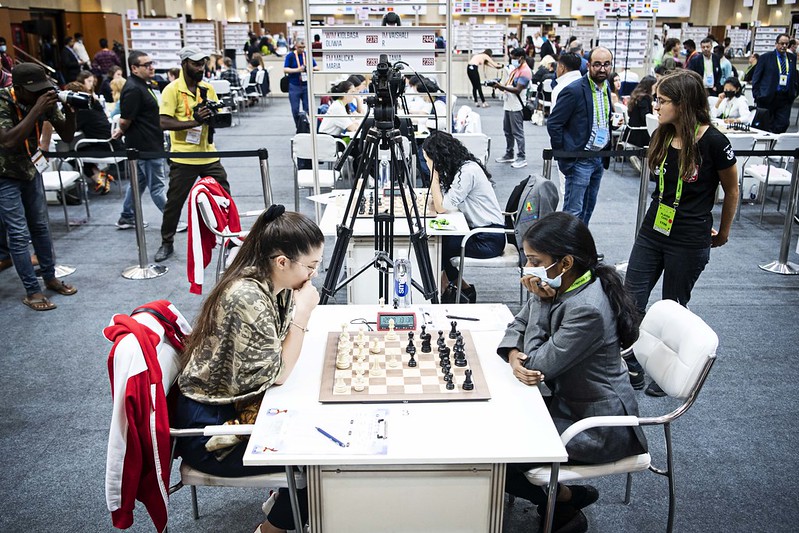 Nerves and exhaustion were visible everywhere as the 44th Chess Olympiad in Chennai reaches its climax, with medals on the line. 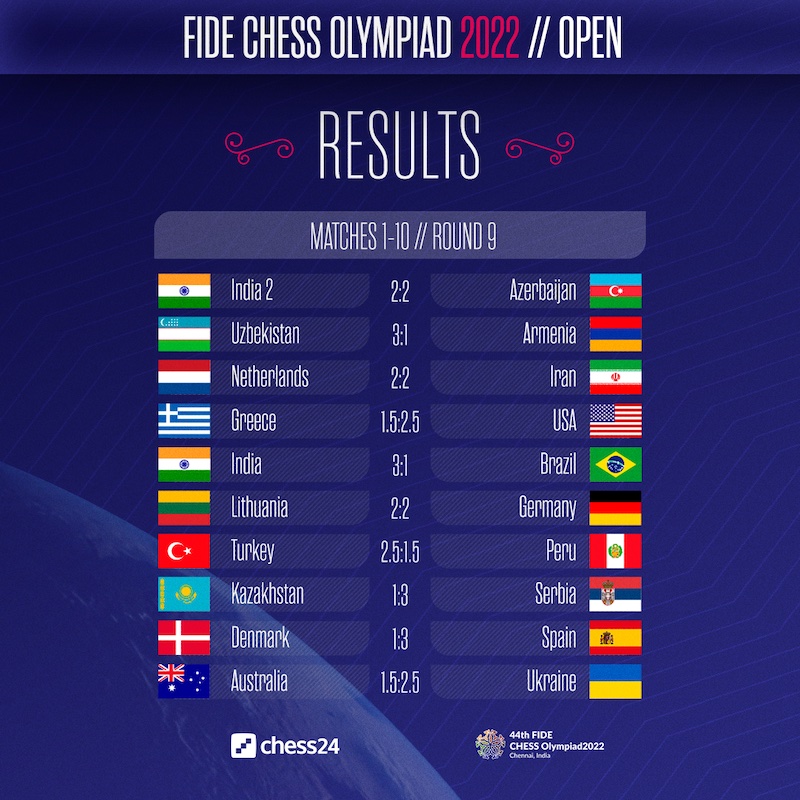 Armenia were unbeaten and would have come close to securing medals with a win in Round 9, but instead they suffered their first defeat, losing 1:3 to Uzbekistan. 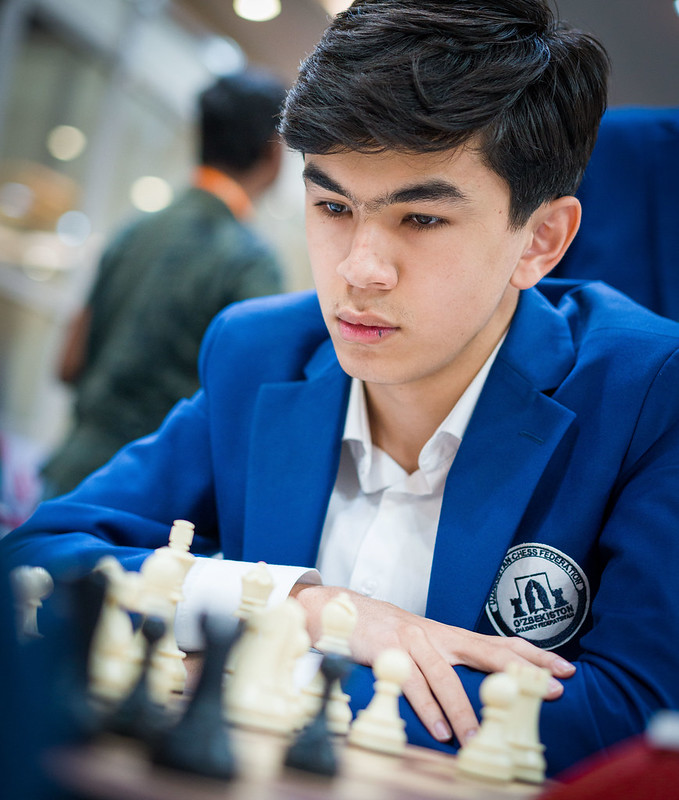 16-year-old Javokhir Sindarov opened the scoring after Samvel Ter-Sahakhyan turned down a potential draw by repetition and was then hit by a fine piece sacrifice.

32.Nf5! left Black in a world of hurt. After 32…gxf5 33.exf5 Bd7 34.Nh5! White was playing across the board — f6 is threatened, the d-pawn is attacked and the d7-bishop is pinned down the d-file, and b4 threatens to win the c5-knight, which is almost out of squares. Javokhir made no mistake.

Uzbekistan is all about its young stars, but the “veteran” of the team, 27-year-old Jakhongir Vakhidov, has a 2821 performance rating and wrapped up victory by outplaying the previously unbeaten Robert Hovhannisyan in a rook endgame.

Uzbekistan leapfrogged Armenia to take the sole lead on 16/18, and in Round 10 they’ll meet the team other than Armenia on 15 points, India 2, who drew against Azerbaijan. That match was notable first of all for Gukesh finally being held to a draw, by Shakhriyar Mamedyarov. 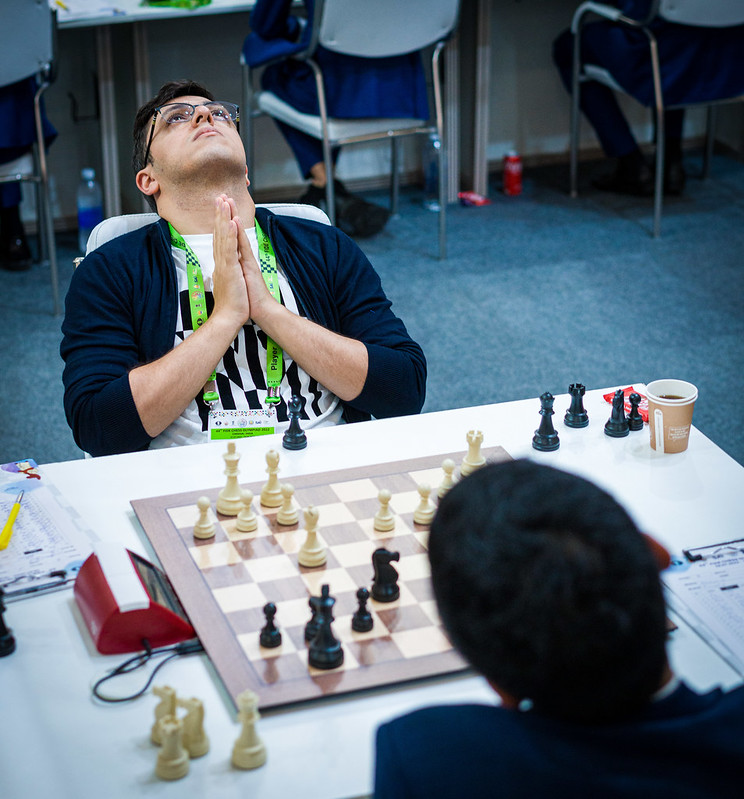 Nijat Abasov's prayers have been answered for two days in a row | photo: Lennart Ootes, FIDE

Without the “Gukesh point” the match was tense, with the wild Mamedov-Sarin ending in a draw as well. Then, for a second day in a row, Nijat Abasov’s opponent made a huge blunder in a tricky but by no means lost position.

That meant Praggnanandhaa had to win at all costs against Vasif Durarbayli, who wasn't thrilled with the pre-game anti-cheating check.

In hindsight Vasif should have repeated moves at the time control to likely make a draw. Playing on was reasonable, based on the position, but soon all hell would break loose.

The piece configuration, and especially the queen on h1 and currently with no squares, left the players with no general guidelines by which to play. With little time, they had to trust their intuition, and the evaluation of the position oscillated wildly.

In the end, however, the final twist went Praggnanandhaa’s way, with 61.Bd3! the moment it became clear that White would win.

Taking the queen with 61…Rxh1 is met by 62.Re6+ and winning back the queen with an easy win, while 61…Qa3 62.Re6+! in the game also led to an easily won queen endgame. India 2 could breathe a huge sigh of relief. 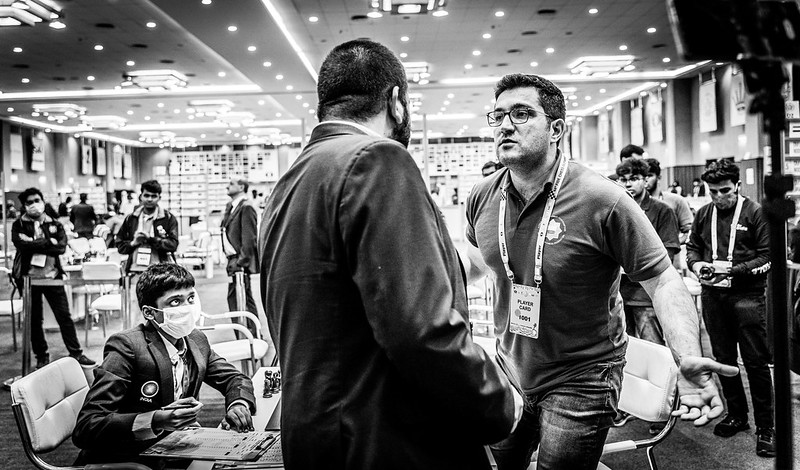 Praggnanandhaa looked bemused by the reactions after the game | photo: Lennart Ootes, FIDE

Elsewhere it was a must-win situation for many teams if they wanted to fight for the podium. Germany didn’t manage against Lithuania, getting held to a 2:2 draw, but others did, with India beating Brazil 3:1 (Arjun Erigaisi is now just 3 points away from the 2700 club) and the USA beating Greece 2.5:1.5. 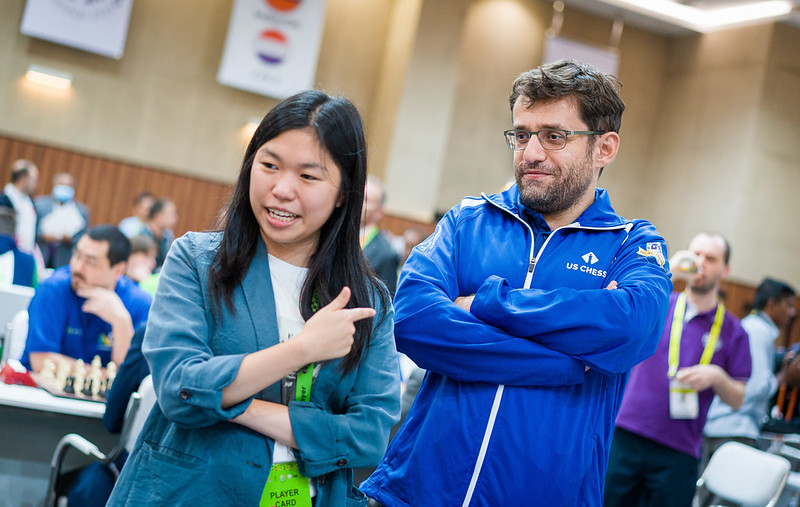 That was a wild match, with Levon Aronian perhaps having too much fun!

This time it didn’t matter too much, however, since Wesley So and Fabiano Caruana both won to clinch the match, with Fabi getting to play some nice sacrificial moves after losing his previous two games.

The USA and Greece are two points behind leaders Uzbekistan, where they’re joined by the Netherlands and Iran, who drew all their games despite some tense action. 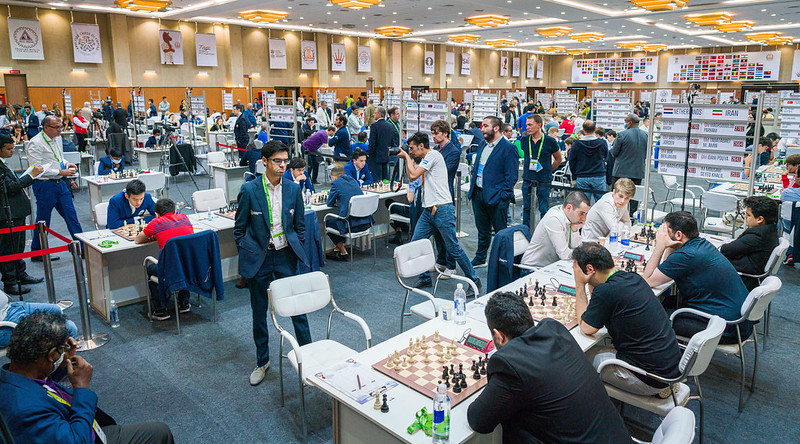 Anish Giri went for one of the most unusual exchange sacrifices you’ll witness, against Parham Maghsoodloo.

35.Rc3!? was a radical solution to eliminate the powerful b4-bishop. It wasn’t clear how good it was, but it was White who was pressing until move 77. Meanwhile Jorden van Foreest managed to defend Rook vs. Rook + Bishop against Amin Tabatabaei in a 109-move marathon.

That left the standings as follows before the penultimate round. 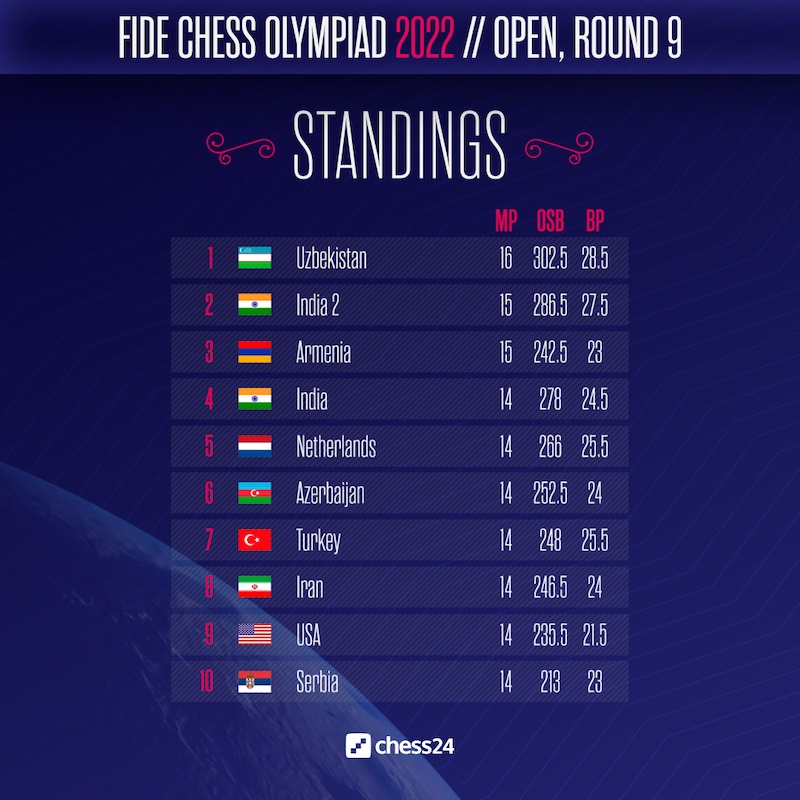 The Women’s section is even tighter after Poland threw a cat among the pigeons by defeating top seeds and sole leaders India. 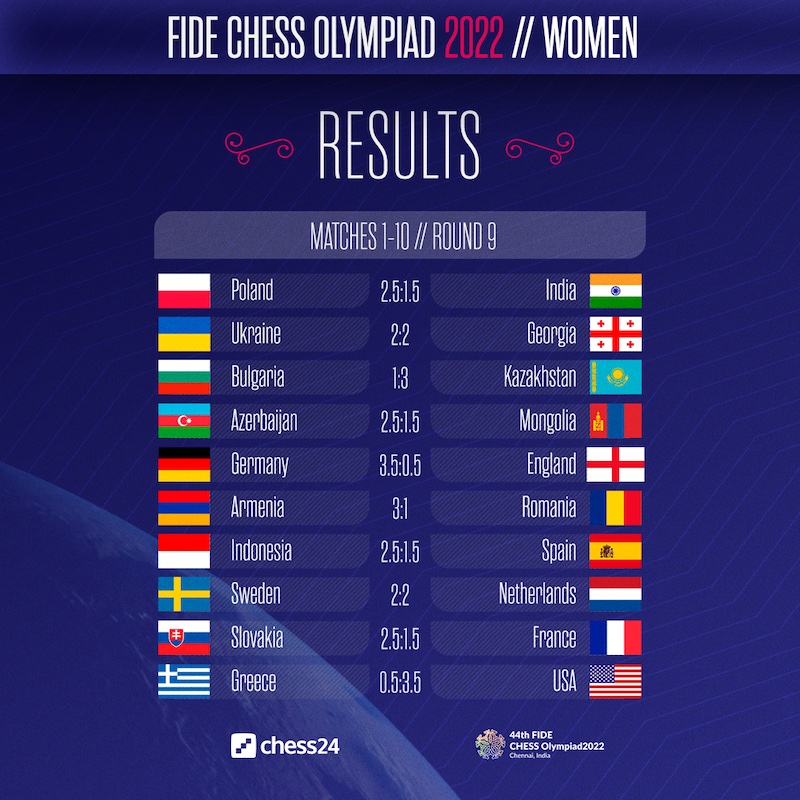 Monika Socko managed to escape on Board 2 in a very tricky position where Harika Dronavalli could have won if she’d found the precise way to attack.

There were also draws in Alina Kashlinskaya-Humpy Koneru and Maria Malicka-Tania Sachev, so that everything came down to Oliwia Kiolbasa’s game against Vaishali.

It felt like a case of an unstoppable force meeting an unmovable object, since Kiolbasa was on 8/8 but Vaishali had saved worse positions on the way to scoring an unbeaten 6.5/8.

Oliwia showed great technique, however, and got the helping hand she needed to move to the Olympiad’s only perfect 9/9 score!

That result changed everything, with Poland making up the two-point gap to India and in fact taking the lead with better tiebreaks. 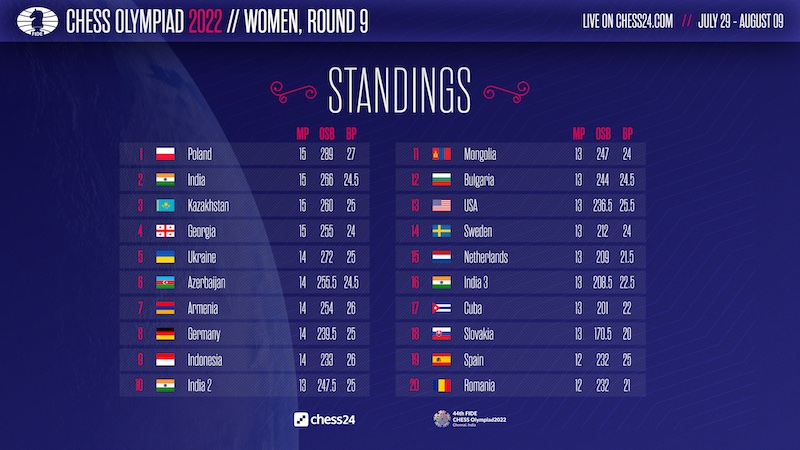 As you can see, India were also caught by Georgia, who drew 2:2 with Ukraine, and Kazakhstan, who beat Bulgaria 3:1, with Zhansaya Abdumalik inflicting a first loss on Nurgyul Salimova, from whom she took over as the top performer on Board 1. 59-year-old Pia Cramling, on 8/9, has the 2nd best performance. 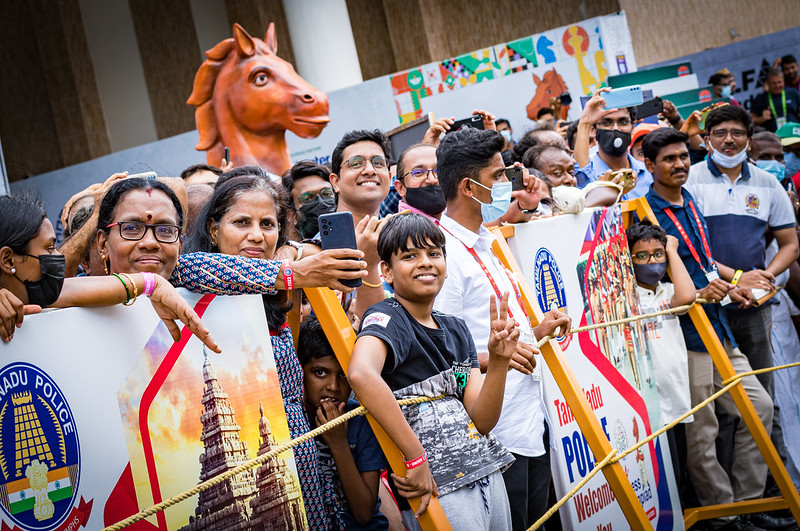 Medals are within the grasp of a huge range of teams, with 5 just a point behind the leaders (including Germany, for whom Jana Schneider has scored 8.5/9), while another 9 teams are 2 points behind the leaders.

It’s India-Kazakhstan and Georgia-Poland in the Women’s section on Monday, while India 2-Uzbekistan (the clash of the kids!) and Azerbaijan-Armenia will be the key match-ups in the Open section.