Gukesh beat Gabriel Sargissian in Round 6 of the Chennai Olympiad to move to 6/6 and a live rating of 2719.3, but Armenia hit back to beat India 2 and take the sole lead going into the rest day. On Friday they’ll face top seeds USA, so that Levon Aronian may feature against the team with which he won three Olympiad gold medals. 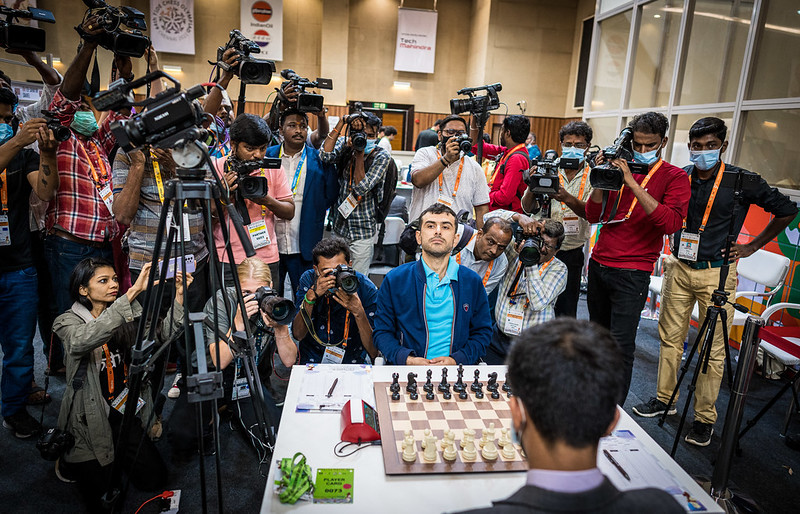 When playing Gukesh, Gabriel Sargissian also had to deal with the massive media interest in his young opponent | photo: Lennart Ootes, FIDE

Round 6 of the Olympiad was incredibly tense, with only one of the top 14 matches (Lithuania 0.5:3.5 India 3) seeing a team win by more than the smallest possible margin. 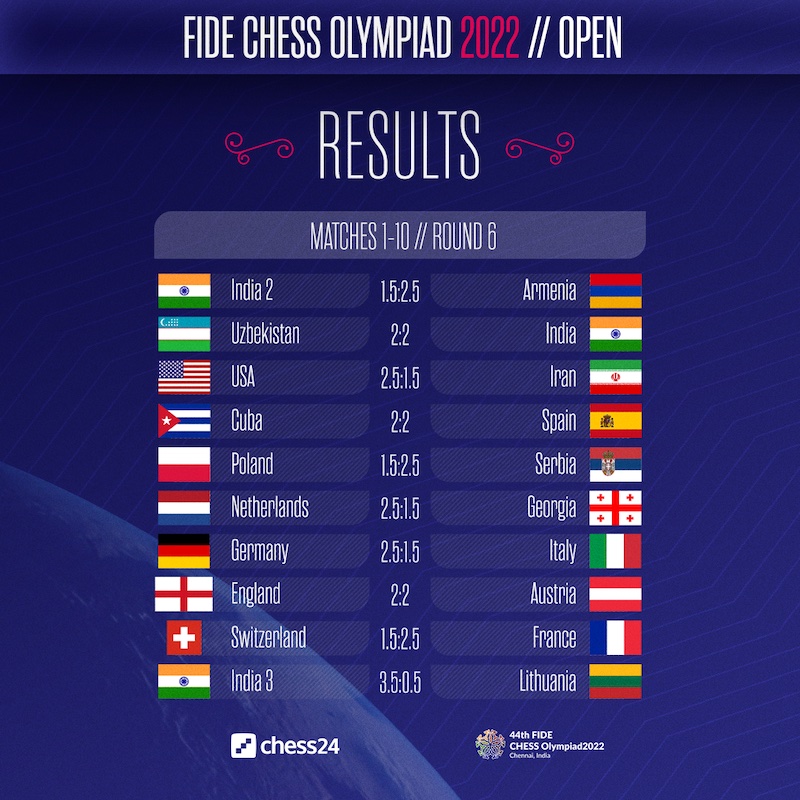 At first it seemed the young guns of India 2 were going to storm into the sole lead. Gukesh surprised the hugely experienced Gabriel Sargissian with a seemingly modest 11th move, but soon built up a fierce attack. Gabriel missed a tricky defence and Gukesh was unstoppable.

25.Bxb4! was the fastest way to transfer the queen to the kingside, and after 25…Qxb4 26.Qg2 the only plausible defence was to swap off queens with 26…Qe4+.

That couldn’t stop Gukesh promoting the e-pawn to a new queen that was just too powerful for Black’s rook and bishop. The outcome was never in doubt.

Gukesh, already the Indian no. 3, is having a dream event, but his team’s fairy tale came up against the DNA of Armenian chess players. Somehow in team events they always find a way to react to setbacks, and in this case Samvel Ter-Sahakyan and Robert Hovhannisyan managed not only to save but win the match.

That left 12th seeds Armenia as the only team with a perfect score in the Open section going into the rest day, but in Friday’s Round 7 they’ll face the top seeds, USA.

Levon Aronian and Wesley So made quick draws against their Iranian opponents and Leinier Dominguez couldn’t squeeze out a win, but it didn’t matter, since Fabiano Caruana overpowered ex-World Junior Champion Parham Maghsoodloo. 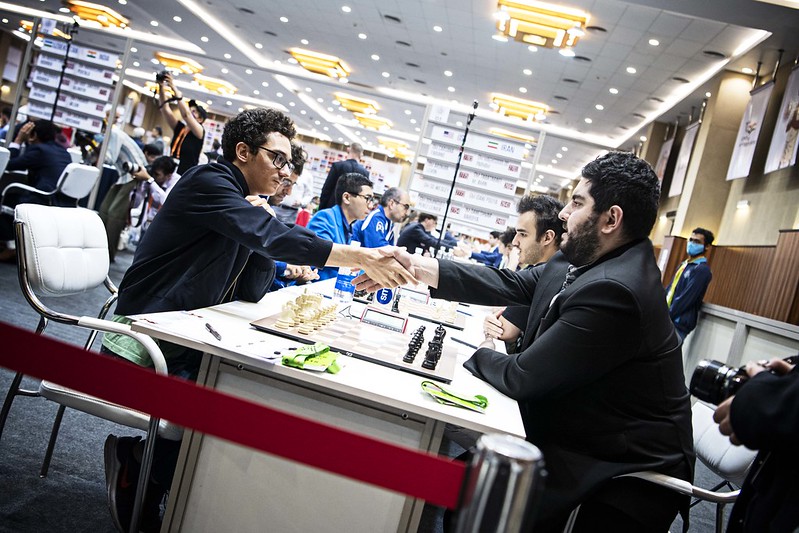 A curiosity is that it was the first game of the 2022 Olympiad between two players rated 2700+. That’s unusual, since in 2018, for instance, we saw Giri-Caruana already in Round 3, then had seven 2700+ clashes in Round 4. The absence of Russian and Chinese players, and the likes of Maxime Vachier-Lagrave and Alireza Firouzja, has halved the number of players at the very top.

Fabiano didn’t make it look like a tough match-up, however. He played 6.f3 against Parham’s Najdorf and was suddenly just winning in the run-up to the time control, without having to do anything dramatic. 36…Bxc4 was a nice try by Parham.

Black has huge weaknesses, however: the g-file is an avenue to his king, and the pawns on a6, d6, f6 and h6 are all chronically weak. Simply 37.Qd2! posed questions Black couldn’t answer, and after 37…Qb6 (White was now threatening to take the bishop) 38.Qxh6 d5 39.Qg6+ the black king was doomed. Fabi won in 48 moves.

USA are just one point behind Armenia, while on 10/12 there are no less than 11 teams sharing 3rd place, including all three India teams. 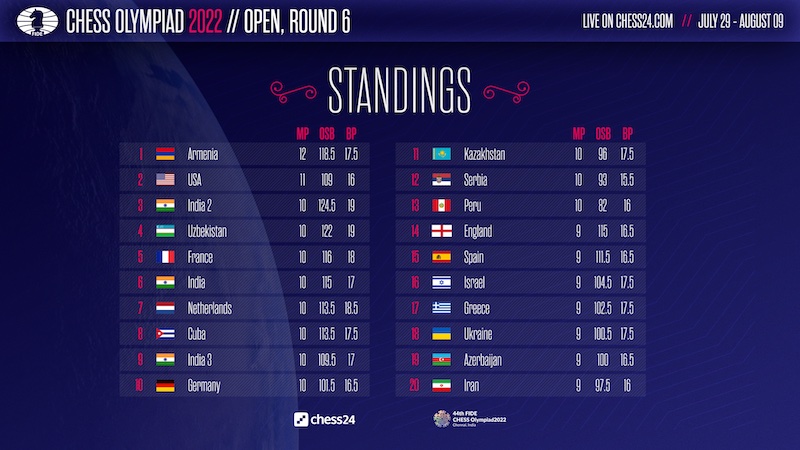 India 1 drew against Uzbekistan in a match most notable for Harikrishna ending the winning streak of 17-year-old Nodirbek Abdusattorov. Nodirbek essentially didn’t make it out of the opening alive!

Surprise names in the tie for 3rd include Cuba, who drew with Spain, Serbia, who defeated Poland, Peru, who took down Croatia, and Kazakhstan, who crowned a comeback from an early loss to Tajikistan by defeating the Czech Republic.

Kazybek Nogerbek hasn’t faced Gukesh-level opposition, but you can’t do more than beat the players put in front of you!

There are some big names in the tie for 3rd, including Germany, who owed their victory over Italy to a Nisipeanu win and a heroic 107-move save by Rasmus Svane. 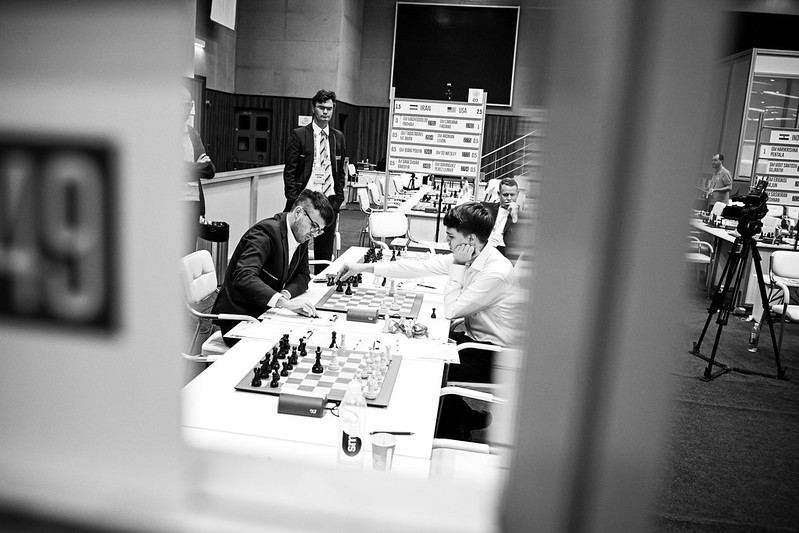 The Netherlands are also in the tie for 3rd after scoring a stylish win over Georgia. On top board, Anish Giri was facing Baadur Jobava — the continuation of an epic rivalry!

Once again, however, things went Anish’s way, and he commented, “the exchange sac just looks like winning for me”.

It was one of those cases where Black was doomed whether he took it or tried to ignore it.

Jorden van Foreest wasn’t going to concede the team “game of the day” prize so easily, however, and got to finish in style.

41…Bxc4! 42.Rxc4 Rd1+! and Mikheil Mchedlishvili resigned rather than decide how to get mated next move. 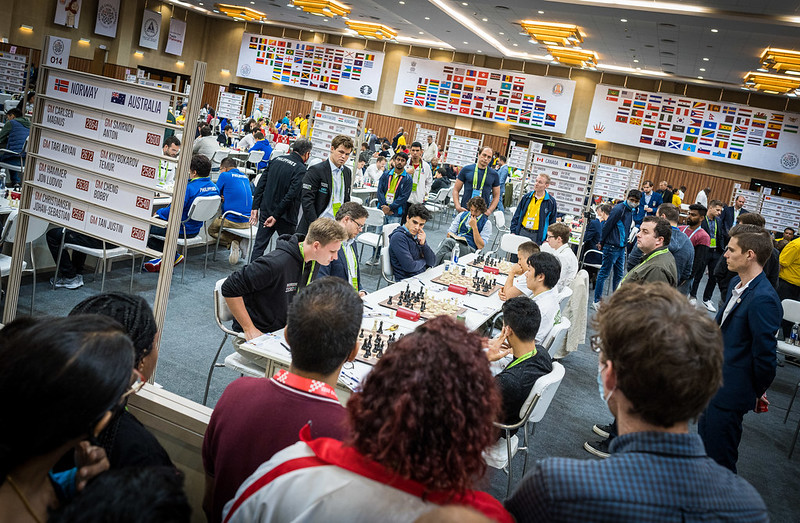 The rest of Team Norway hasn't managed to back up Magnus so far | photo: Lennart Ootes, FIDE

Meanwhile in match 14 Magnus Carlsen won a 4th game in 5, this time against Australian GM Anton Smirnov, whose play was incredibly ambitious.

It turns out 26...gxf5! was playable and strong, but Magnus ensured his opponent would have less fun with the more pragmatic 26…Nxe4. It worked out perfectly, with Anton down 3 pawns for no compensation when he threw in the towel.

That looked like a good launch pad to team victory for Norway — but soon everything that could go wrong did go wrong.

Aryan Tari missed a tricky defence against Temur Kuybokarov and slipped to defeat, Johan-Sebastian Christiansen let Justin Tan escape from what seemed a hopeless position, and, to cap it all off, Jon Ludvig Hammer lost on time in a position where he was better. Australia won 2.5:1.5! 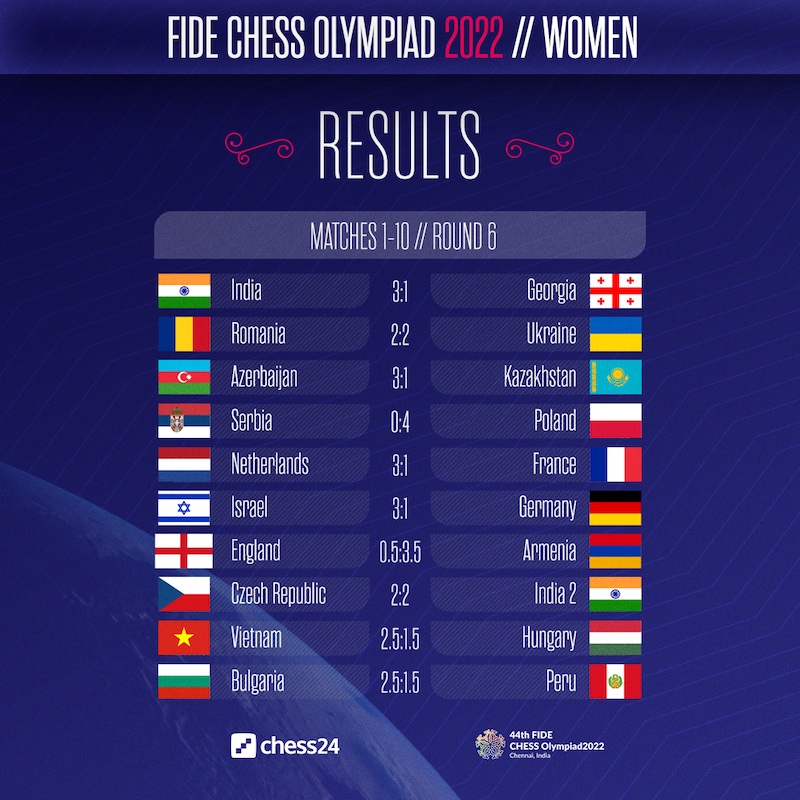 Meanwhile in the Women’s section we also have sole leaders, India, who brushed aside Georgia with a surprisingly convincing 3:1 win.

Humpy Koneru beat Nana Dzagnidze on top board despite getting surprised by the Benoni. She said afterwards, referring to her lighter schedule after having a child, “I don’t consider myself a completely professional player”.

There was also a 4th win for 21-year-old Vaishali, who is fast emerging from the “sister of Praggnanandhaa” shadow. Her exchange sacrifice with 17.b4! Bxa1 18.Qxa1 hugely impressed our commentators.

The problem is the ultimately impossible to meet threat of b5.

In 2nd place one point behind India are their next opponents, Azerbaijan, who defeated Kazakhstan 3:1, and Romania, who escaped with a draw against Ukraine after a late twist (after 67.Kf3 or 67.Kf2 the position is equal).

Chess is tough, and Thursday's rest day will be welcomed by all the players... especially as it's preceded by the infamous Bermuda party!

Then it's back to the grind on Friday, when Armenia-USA in the Open section is going to be the match to watch! If top seeds USA can win, they'll have taken the sole lead with four rounds to go.