16-year-old Gukesh scored a 5th win in a row as the Indian 2nd team defeated Spain to join Armenia as the only teams with a perfect 10/10 start to the Chennai Olympiad Open section. Gukesh’s score was matched by 17-year-old Abdusattorov, as Uzbekistan defeated Slovakia 4:0 to join India 1, the USA, Iran and giant killers Cuba in the group just one point behind. 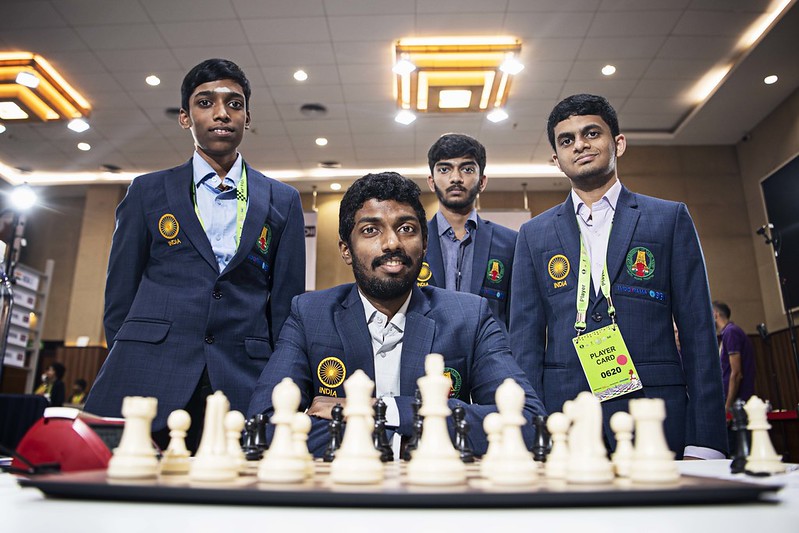 It was suspected in the run-up to the Olympiad that the Indian 2nd team, packed full of prodigies destined for the World Top 10, might be more dangerous than the 1st team, and so it’s proven so far. 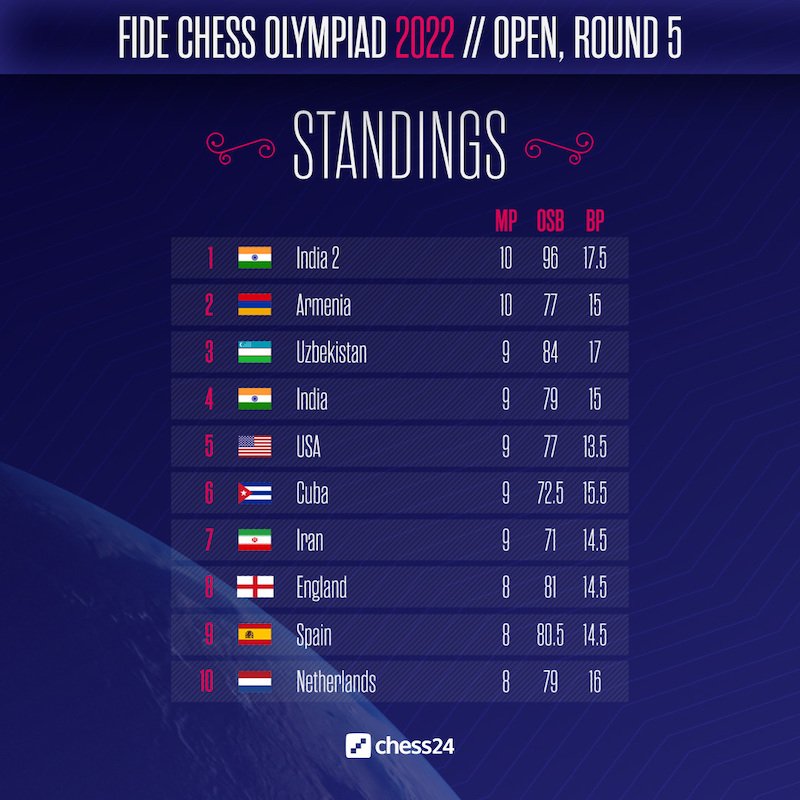 It’s not just that they’ve won all their matches, but the way they’ve done it. Although they lost a first game of the event in Round 5, when Praggnanandhaa cracked on move 81 against Jaime Santos of Spain, by that point the match was long over as a contest. 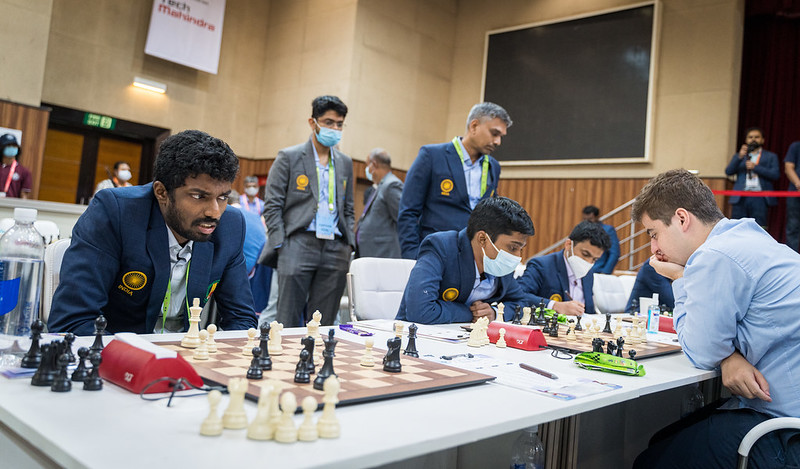 Jaime Santos picked up a win for Spain, but there was no stopping India 2 | photo: Lennart Ootes

16-year-old Gukesh played the Sicilian against 50-year-old attacking chess legend Alexei Shirov and made things look easy as he steered the game to a winning endgame. Alexei’s seemingly ambitiously plan with f5 and Ne6 only doomed him to defeat.

The numbers are stunning…

…and barring a huge collapse it looks as though Gukesh finally will become the 3rd youngest player in history to be rated above 2700 on an official FIDE rating list — something he temporarily missed out on when he lost his last game in Biel.

So far the plan of having 29-year-old Adhiban as the one experienced player in the team is also looking inspired, with the “Beast” on 3/3, while the one young star chosen for the 1st team is also doing all you could ask of him. 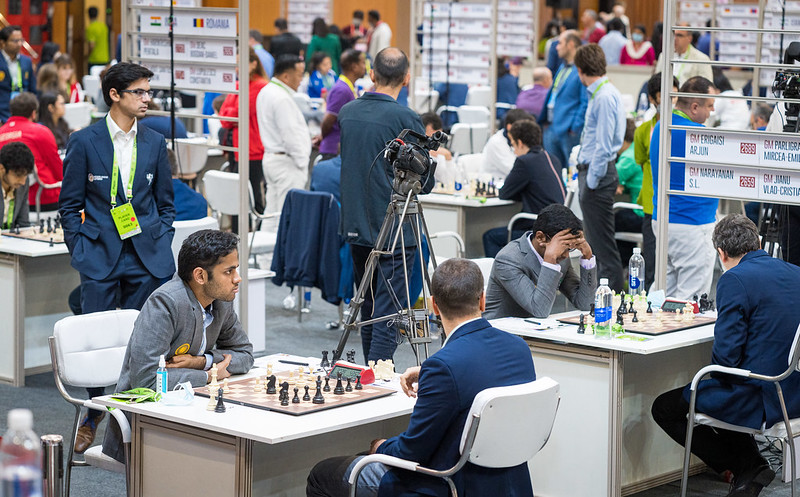 India don’t have a monopoly on young talent, however, with Nodirbek Abdusattorov showing no hangover from his win over Fabiano Caruana as he scored a lightning fast win over Slovakia’s Jergus Pechac.

The resignation was perhaps a little premature, but our commentators felt it was a position you always lose, especially against a technician of Nodirbek’s calibre. It’s not just Nodirbek, however, as the Uzbek team won 4:0, while a young Iranian team defeated Turkey 3:1. 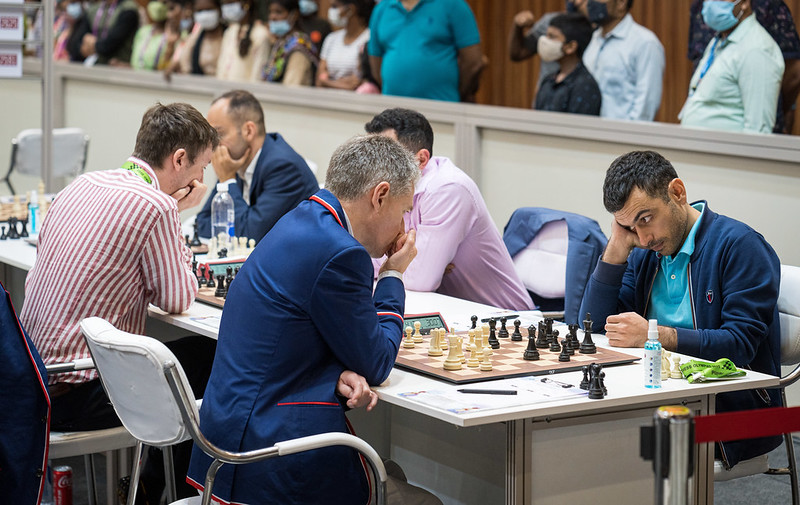 That’s not to say experience can’t be a virtue at the Olympiad, however. The only team other than India 2 to have a perfect score in Chennai are Armenia, who have shrugged off the loss of Levon Aronian to win five matches without losing a single game. In Round 5 they achieved that by beating England, after Luke McShane’s difficult defence against Hrant Melkumyan crumbled in time trouble. 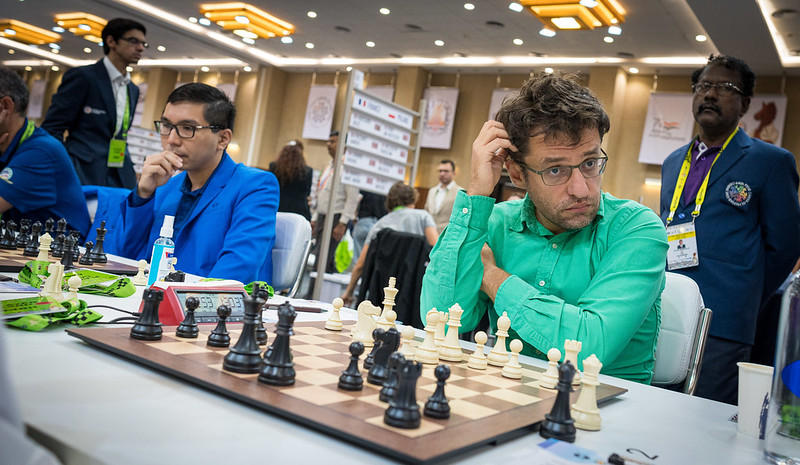 USA are not yet firing on all cylinders, but they've dropped only 1 match point | photo: Lennart Ootes, FIDE

The USA also managed to stay within a point of the leaders thanks to 38-year-old Leinier Dominguez, who moved to 3.5/4 by beating Maxim Rodshtein after Fabiano Caruana, Levon Aronian and Wesley So had all made relatively quick draws.

Caruana is in danger of slipping out of the Top 10 after misplaying a big advantage against Israel’s Avital Boruchovsky.

21.Nxf4 and Black would be significantly better, but after 21.Qxb7! the threat of back-rank mate prevents Black from consolidating an advantage.

The big surprise team on 9 points are 32nd seeds Cuba, who followed a draw against Ukraine and a win over Hungary by simply crushing 6th seeds Azerbaijan. Despite a win for Shakhriyar Mamedyarov on top board Cuba won 2.5:1.5 and were close to making it 3:1. 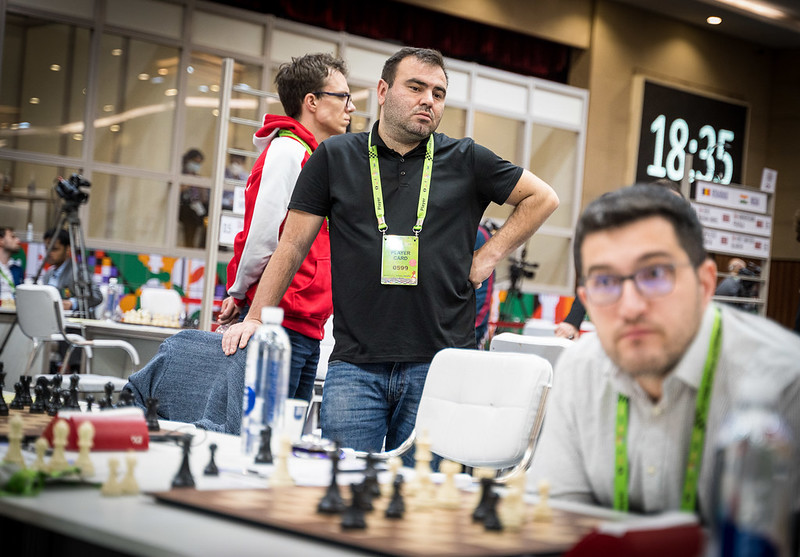 Shakhriyar Mamedyarov won, but it was a tough day for Azerbaijan | photo: Lennart Ootes, FIDE

It was a decisive round, with the one draw in the top 15 matches coming in France-Poland, when Radek Wojtaszek’s win over Laurent Fressinet was balanced out by Maxime Lagarde’s defeat of Wojciech Moranda. 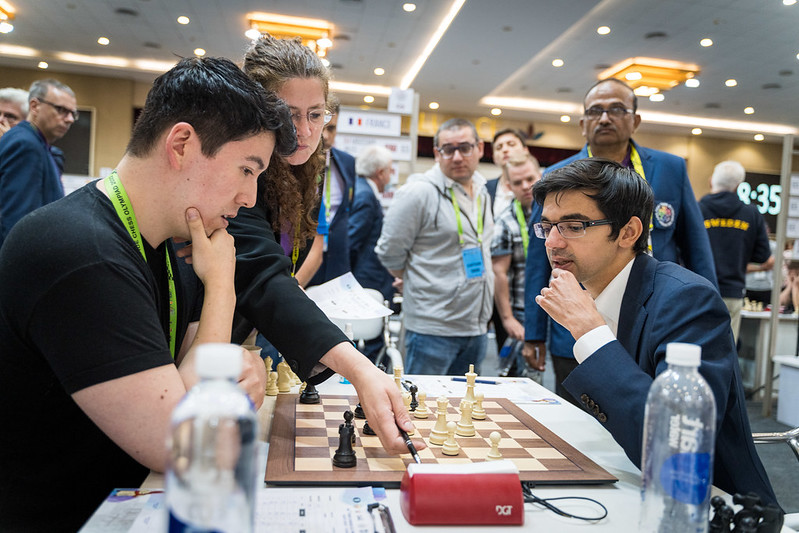 Eric Hansen had chances to survive in time trouble, but in the end Anish Giri won as the Netherlands scored a perfect 4:0 win over Canada | photo: Lennart Ootes, FIDE

Further down the standings a number of teams are on the comeback trail. The Netherlands beat Canada 4:0, Ukraine beat Estonia 3.5:0.5, Germany beat Slovenia 3:1 and Norway defeated giant killers Zambia 3.5:0.5.

World no. 1 Magnus Carlsen was willing to put his sky-high rating on the line and needed just over half an hour to checkmate IM Gillan Bwalya.

That followed Magnus' win the day before against Dambasuren Batsuren. The Mongolian player is having an eventful tournament, as in Round 5 he came up against the one and only David Navara.

David is the most polite man in chess, but can also be a killer on the board. The Czech Republic won 3.5:0.5 and David found a beautiful finish. 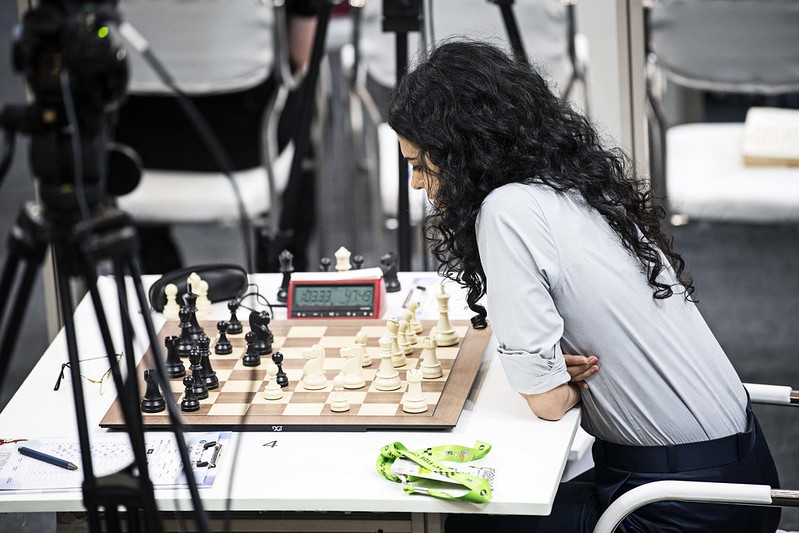 For a 2nd day in a row Tania Sachdev scored the only win for India 1 | photo: Stev Bonhage, FIDE

In the Women’s section it was once again Tania Sachdev who scored the only win as top seeds India won their 5th match in a row. 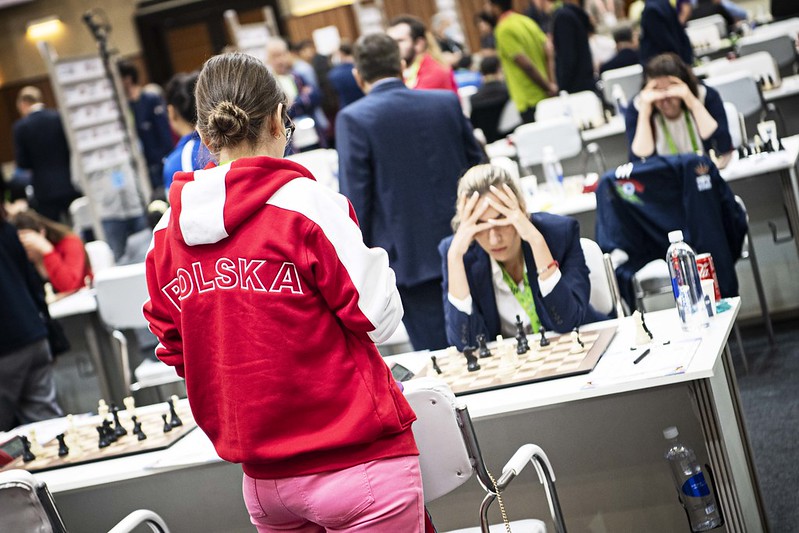 Alina Kashlinskaya couldn't quite get the win she needed against Irina Bulmaga to save the match | photo: Stev Bonhage, FIDE

Mihaela Sandu grabbed one of the wins after playing the tricky 28.Bf6! against Monika Socko.

It turns out Black should have grabbed the bishop with 28…gxf6 and a likely draw, since after 28…Qa5? it was suddenly a killer blow to play 29.Bxg7! The difference is that after the queen left d8 White could follow 29…Kxg7 with 30.Qf6+! Kg8 31.Qxh6 and a crushing attack.

2nd seeds Ukraine only escaped with a draw against Azerbaijan after a mishap on top board.

After 34.Bxe5! Gunay Mammadzada simply resigned, since 34…Rxd2 would be met by 35.Bxf6+ and only then picking up the rook, with an extra piece.

Elsewhere USA suffered a 2nd heavy loss, this time to Peru, and the 7th seeds are currently ranked 42nd, 4 points behind leaders India, Georgia and Romania. 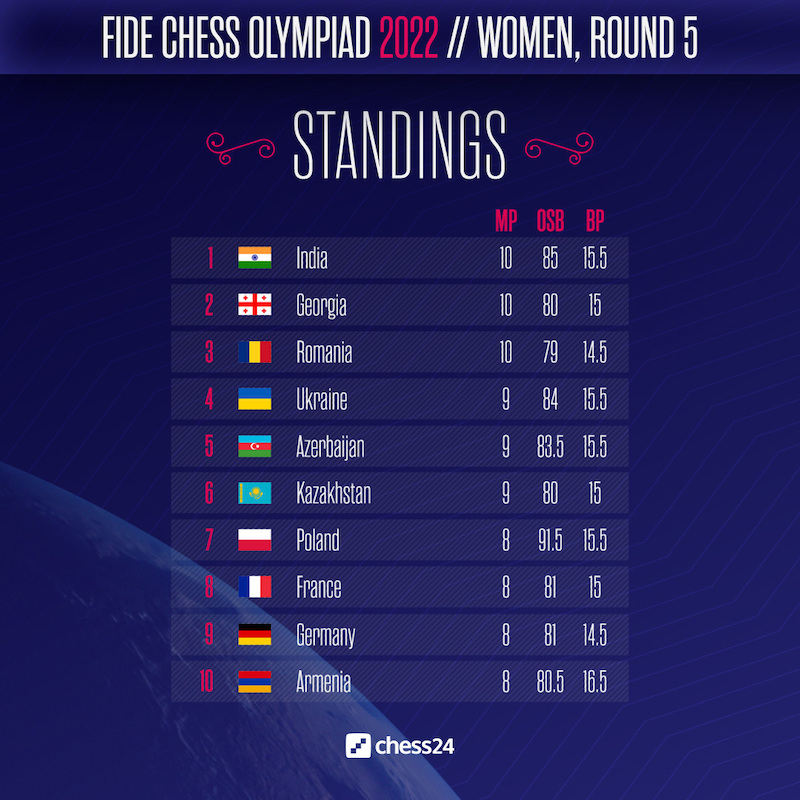 Round 6 is the last before the only rest day (and the Bermuda party!), with India-Georgia and Romania-Ukraine at the top in the Women’s section.

In the Open we have the clash of the leaders, India 2 vs. Armenia, as well as Uzbekistan-India, USA-Iran and Cuba-Spain.