Levon Aronian’s team debut for the USA almost got off to a disastrous start, but a well-timed draw offer saw him escape against IM David Silva of Angola. The USA won 3.5:0.5, while the most popular score of the day was 4:0, which is the score by which all six Indian teams won their opening matches. 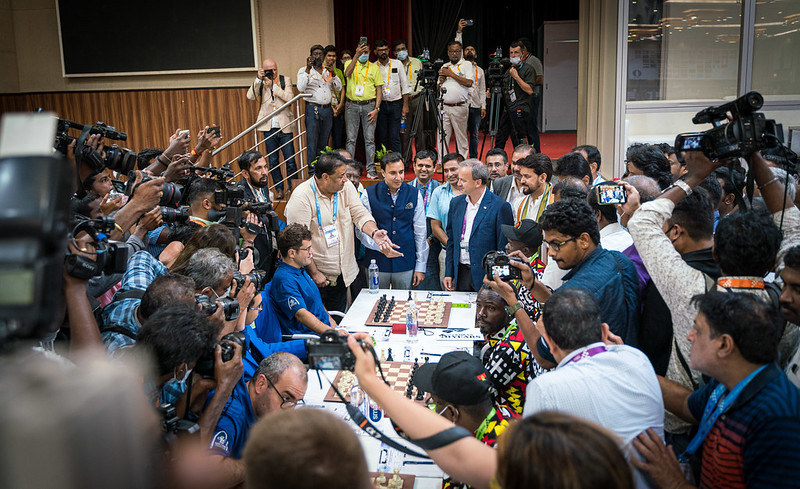 Aronian was playing on the Olympiad top board, which meant huge attention to the 1st move | photo: Lennart Ootes, FIDE

Day 1 of the Olympiad sees huge mismatches in strength, and it was no surprise to see the favourites winning. It was a surprise, however, that they did it in every single match, and by an overwhelming margin. In the Open section 76 out of 92 matches ended 4:0, while it was an even more crushing 70/79 in the Women’s section. 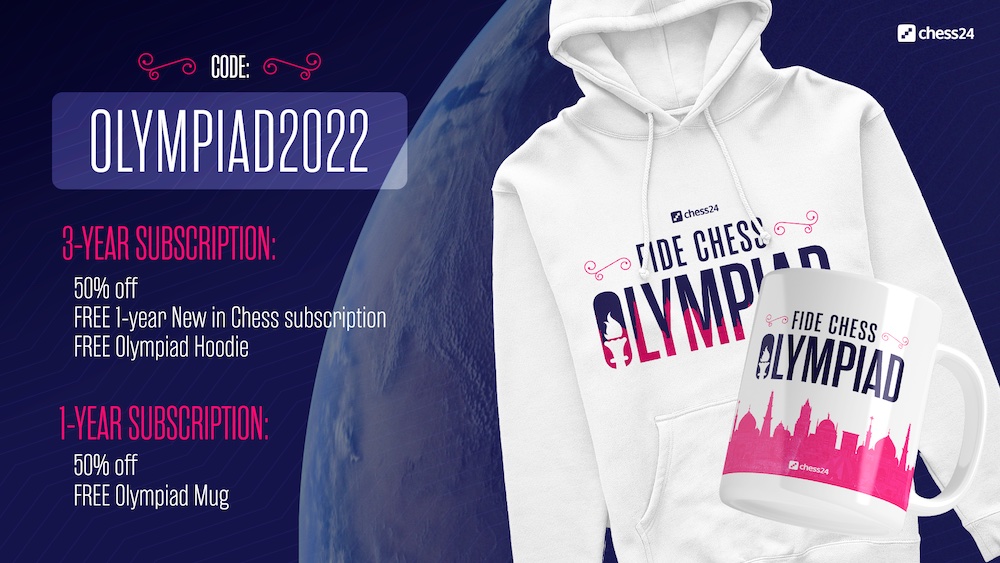 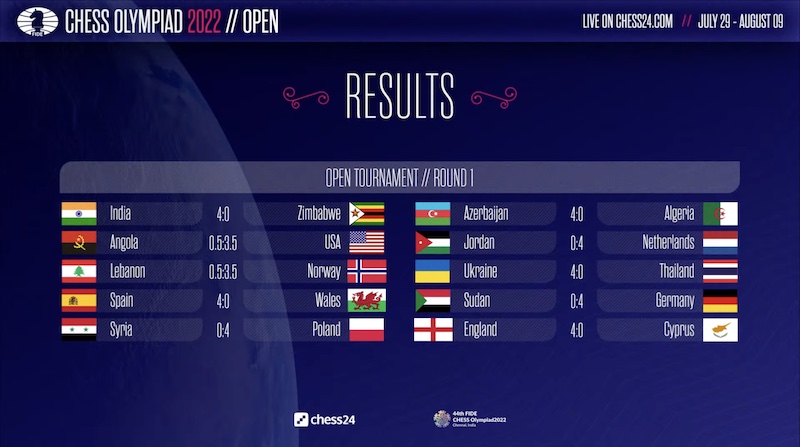 Replay all the games in the Open section here.

That didn’t mean there was no drama, however. Levon Aronian, a 3-time Olympiad winner with Armenia, found himself on top board for the USA (Fabiano Caruana was rested) and was almost immediately in trouble.


Many observers, including Peter Svidler on our commentary team, felt there might have been some internal anguish as Levon looked across the board at his Angolan opponent IM David Silva’s shirt.

Levon may not have done much right in the game, but his draw offer was well-timed.

David accepted, which was understandable in the circumstances. A draw against the world no. 5 was a fantastic result, and although the computer gives a +3 advantage if you swap off queens, the endgame is far from a trivial win. On the other boards Wesley So, Leinier Dominguez and Sam Shankland all ensured the top seeds got off to a 3.5:0.5 start.

The other top grandmaster to really struggle was Johan-Sebastian Christiansen. 2239-rated Lebanese FM Faisal Khairallah met his opponent's French Defence with 2.b3!? and Black was dead lost in 10 moves!

It was the same story, however, as although Faisal missed a few killer blows he was still completely winning in the final position of the game, which was drawn by repetition.

Once again, Johan-Sebastian’s teammates did the job, with Jon Ludvig Hammer commenting, “We saved [Magnus] for bigger matches than the first round” and noting, “This seems to be a place for Norwegian success, and we hope to replicate that”.

Many other teams put up a bigger fight than the scoreline suggests. Grzegorz Toczek of Wales was almost holding his own against Alexei Shirov, but Peter Svidler noted that 26…Qd7? (26…Rd7!) was a bit naïve against an attacker of Alexei’s calibre. The Latvian-born Spanish board 1, who turned 50 earlier this month, played the crunching 27.Rxd5! 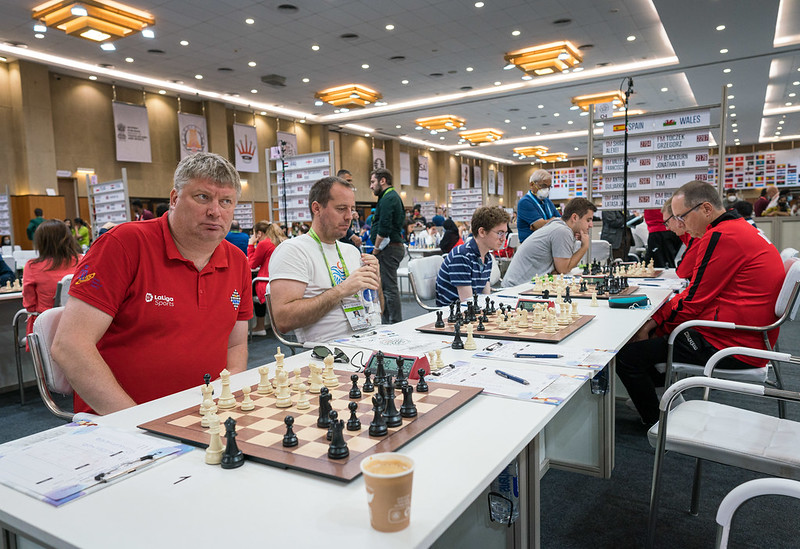 To find an upset win (not draw) in the Open section you had to go all the way down to board 229, where Guyana’s 1928-rated FM Anthony Drayton suddenly found a winning move against Andorra’s 2451-rated IM Jordi Fluvia.

After 29.Bf6! it’s suddenly game over, since if you take the bishop Rxf7+ follows. Jordi was only able to stagger on for six more moves.

All three India teams won 4:0 in the Open section, and it was the same in the Women’s section, though not without some drama. 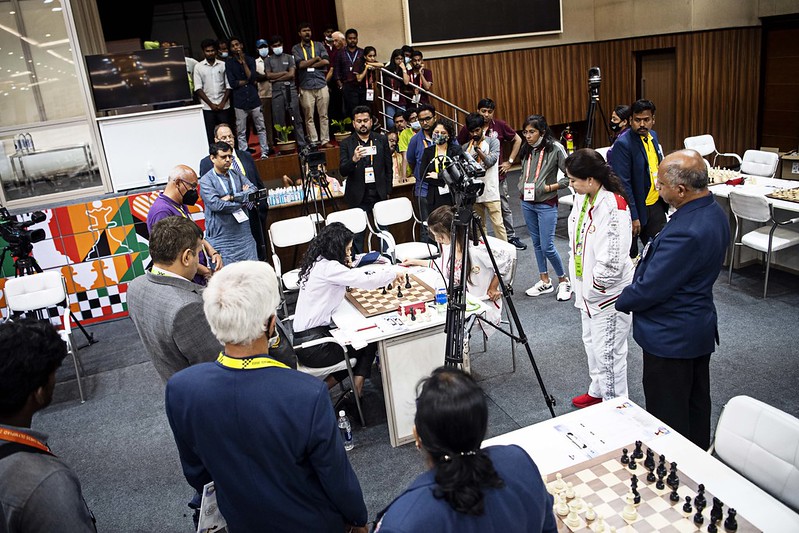 Tania Sachdev had to fight to preserve a perfect 100% score for India | photo: Stev Bonhage, FIDE

Tajikistan were doing well with the white pieces, and although Humpy Koneru managed to turn things around and overwhelm her opponent tactically, Tania Sachdev had to suffer against young Rukhshona Saidova, who was rated a mere 1624.

Peter Svidler pointed out, however, that Rukhshona was playing far above that rating.

Tania survived a close to lost position before battling back to take the initiative and finally grind out a 103-move win.

Vaishali, playing her first Olympiad, had a much easier time on Board 2!

Once again, upsets were few and far between in the Women’s section, and you had to scroll down to board 73 to find one. 2256-rated WGM Dina Belenkaya, representing Israel for the first time, lost control of a good position and finally blundered with 34…Qd5? 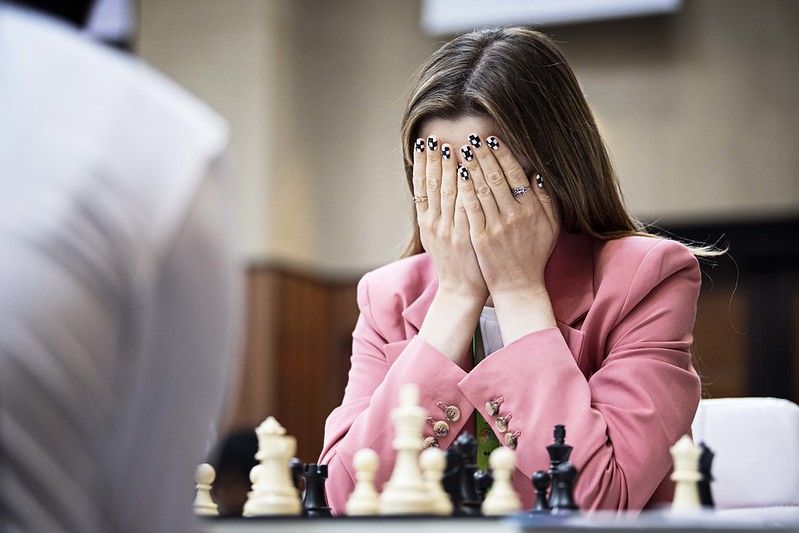 Dina Belenkaya's loss did no harm to her team, though it must have been painful | photo: Stev Bonhage, FIDE

So the favourites made it through Round 1 of the Olympiad unscathed, but things will soon get much more interesting as the bigger teams begin to meet. One potentially interesting clash in Saturday’s Round 2 (if both play) would be Carlsen-Meier, since Georg Meier now plays for Norway’s opponents Uruguay.