Alireza Firouzja was on the verge of scoring a sensational triple victory in St Louis, but Fabiano Caruana stopped the teenage sensation and won a dramatic Armageddon game to take the title in the Champions Showdown: Chess 9LX. 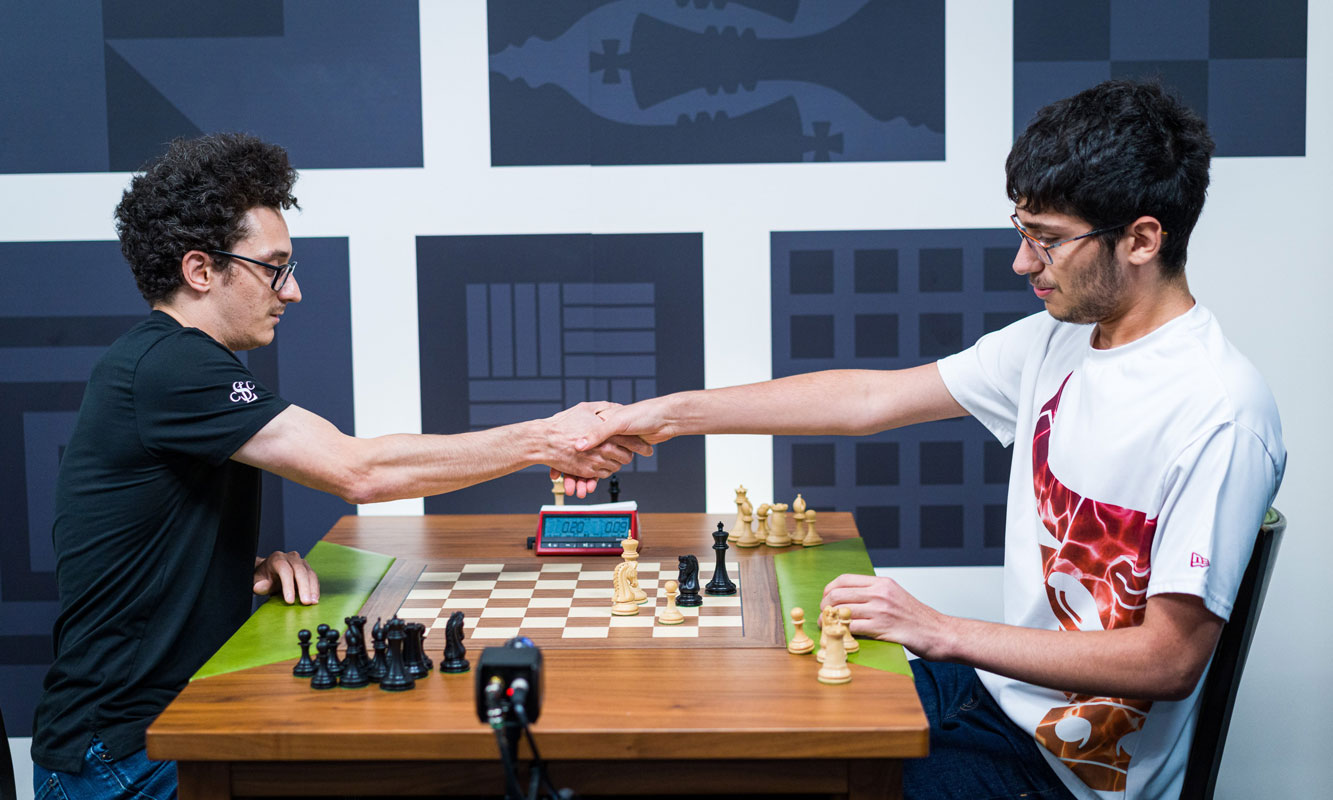 Fabiano Caruana came from behind and scored a perfect 3/3 on the final day in St Louis. He then went on to triumph by winning a tense Armageddon game against Alireza Firouzja after the players traded wins in the playoff.

The duo were tied for 1st with 6.5 points after 9 rounds had been completed on Friday. Shakhriyar Mamedyarov and Ian Nepomniachtchi finished another half a point behind on 6 points.

You can play through all the Chess 9LX games on chess24's Broadcast page. 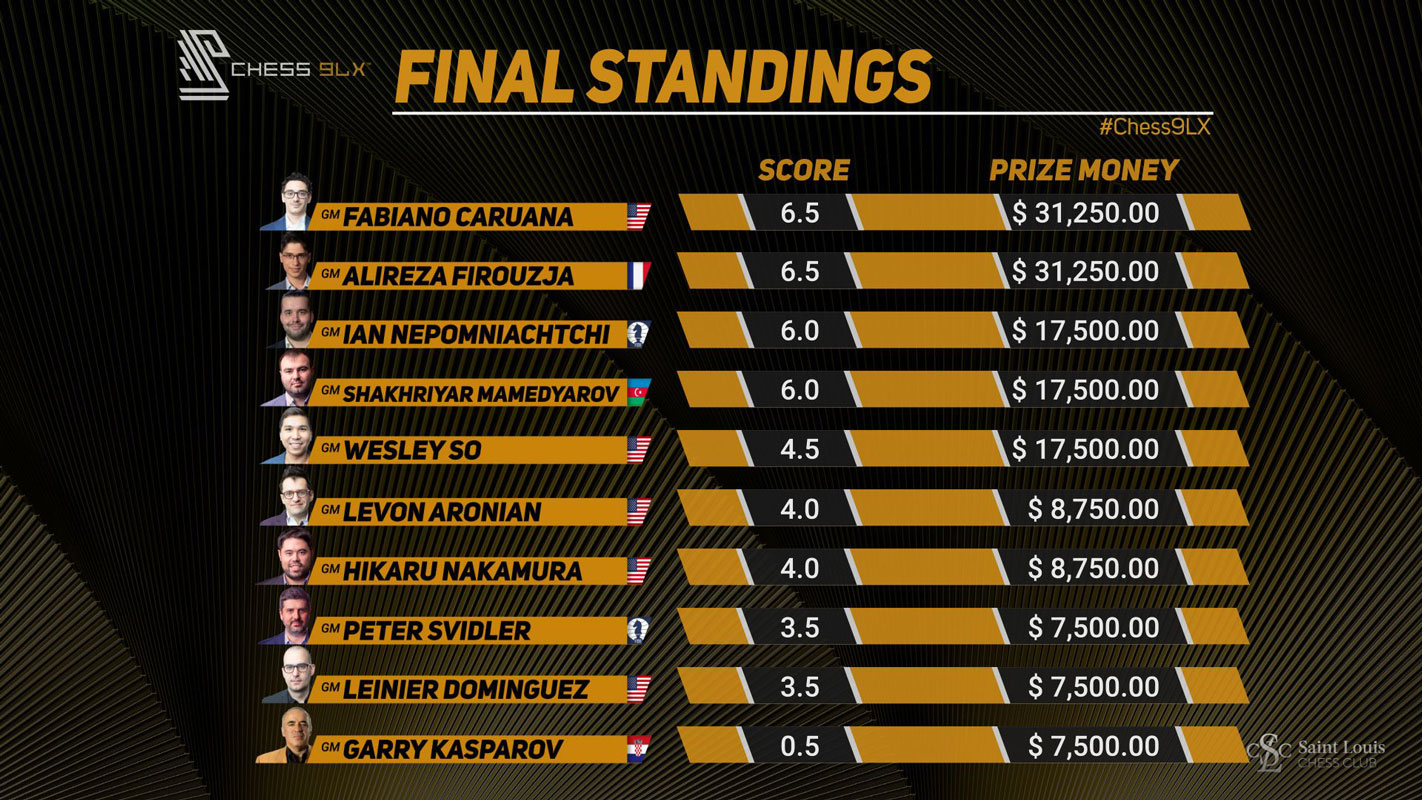 For Caruana, who finished 3rd in the Rapid & Blitz and 4th in the Sinquefield Cup, the victory in Chess 9LX was particularly welcome after he'd struggled for a while and dropped to World #9 in classical. He commented:

It was overall fun. The last day was especially good, because I didn't think I had any chance to win. With three rounds to go, so many people ahead of me and so much catching up to do. All the games went well today. 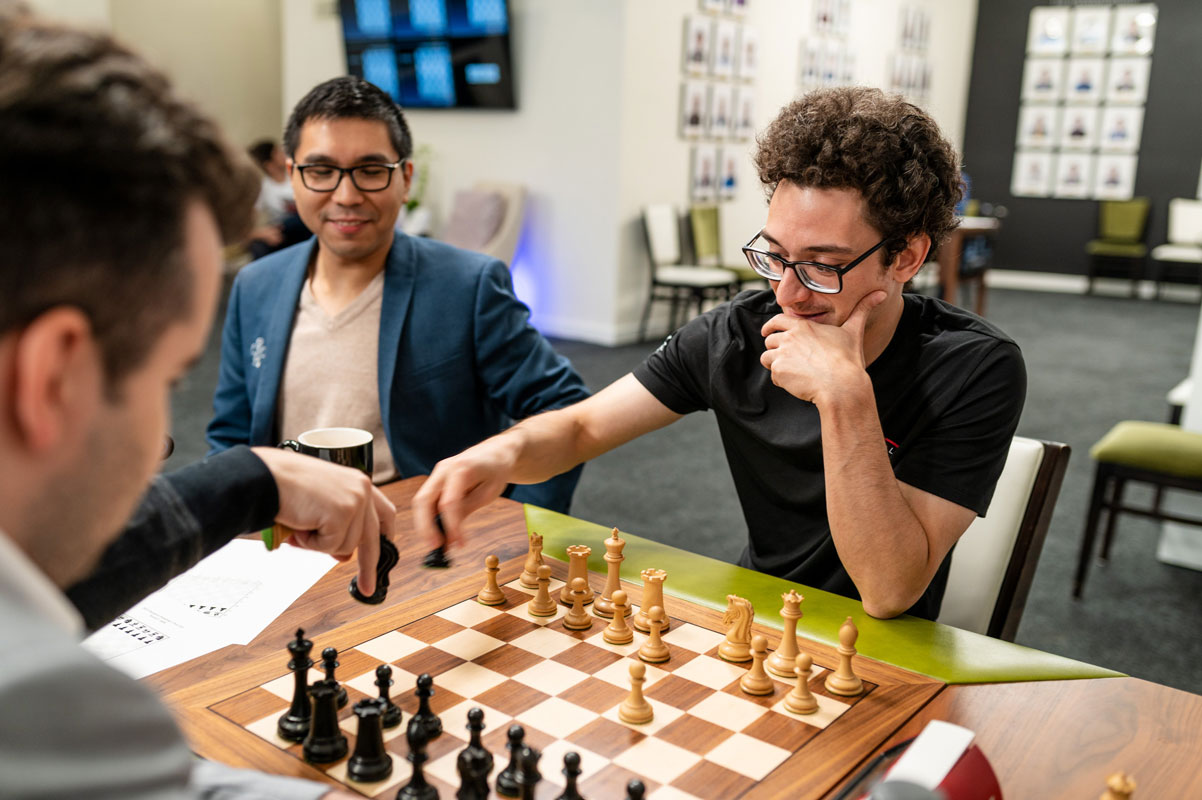 Fabiano Caruana with a deserved title in St Louis. Here he prepares with Mamedyarov and So | photo: Crystal Fuller, St Louis Chess Club

It always feels great. Even though it was a total mess of a playoff, and it was super difficult. I would say I was very lucky in the last game, the Armageddon, and in the first game, so I am very happy.

While positions in Fischer Random/Chess960 often tend to end up looking like a normal game of chess, that wasn't the case for the playoff games.

He eventually got into difficulties, but managed to recover and at one point seemed more than fine. In mutual time trouble, Firouzja stumbled into mate-in-two. 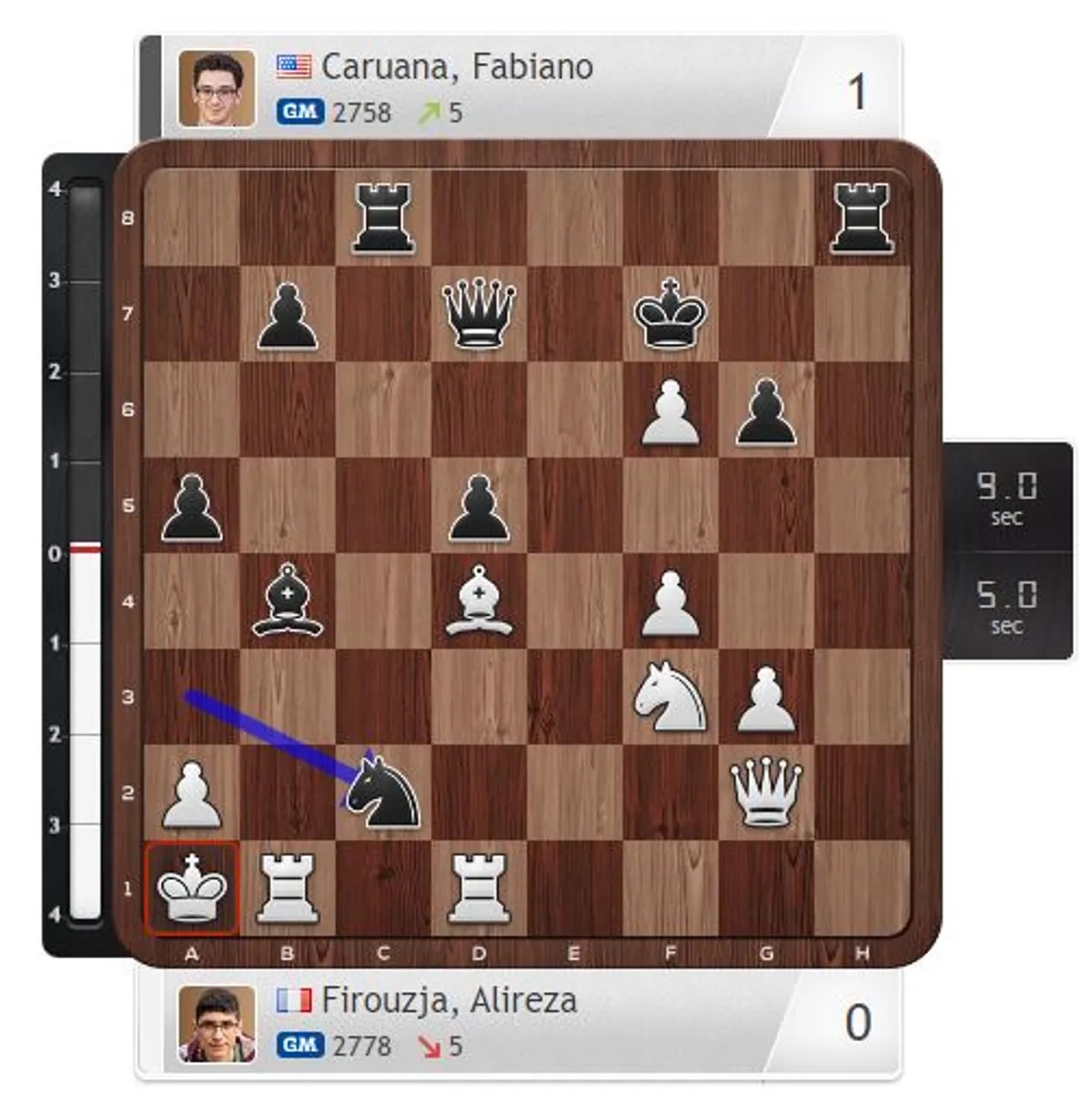 In a must-win game with Black, Firouzja managed to strike back quickly.

12...c5! Black's king is already safe on the kingside, while White lacks development and now faces an attack. 13.Qb5 c4 14.Bc2 Ne8! White can not stop Black from trapping his queen, and Firouzja won after 31 moves. 0-1

The final result could have been different if only Firouzja had converted what was a completely winning position a rook up against Peter Svidler in Round 7.

Regardless, it was three profitable weeks for Firouzja, who cashed in a total of $258,750 for winning the 2022 Grand Chess Tour, the St Louis Rapid & Blitz, the Sinquefield Cup and finishing 2nd in Chess 9LX. In total this Grand Chess Tour season, he has earned more than $300,000.

Perhaps it was understandable that the 19-year-old was not upset about missing a complete sweep.

"I had a hat-trick, as I won GCT, Sinquefield Cup and St Louis," he said, pointing out it would have been a quadruple victory. "Fabiano played very well today. He beat Wesley. He deserved to win the tournament." 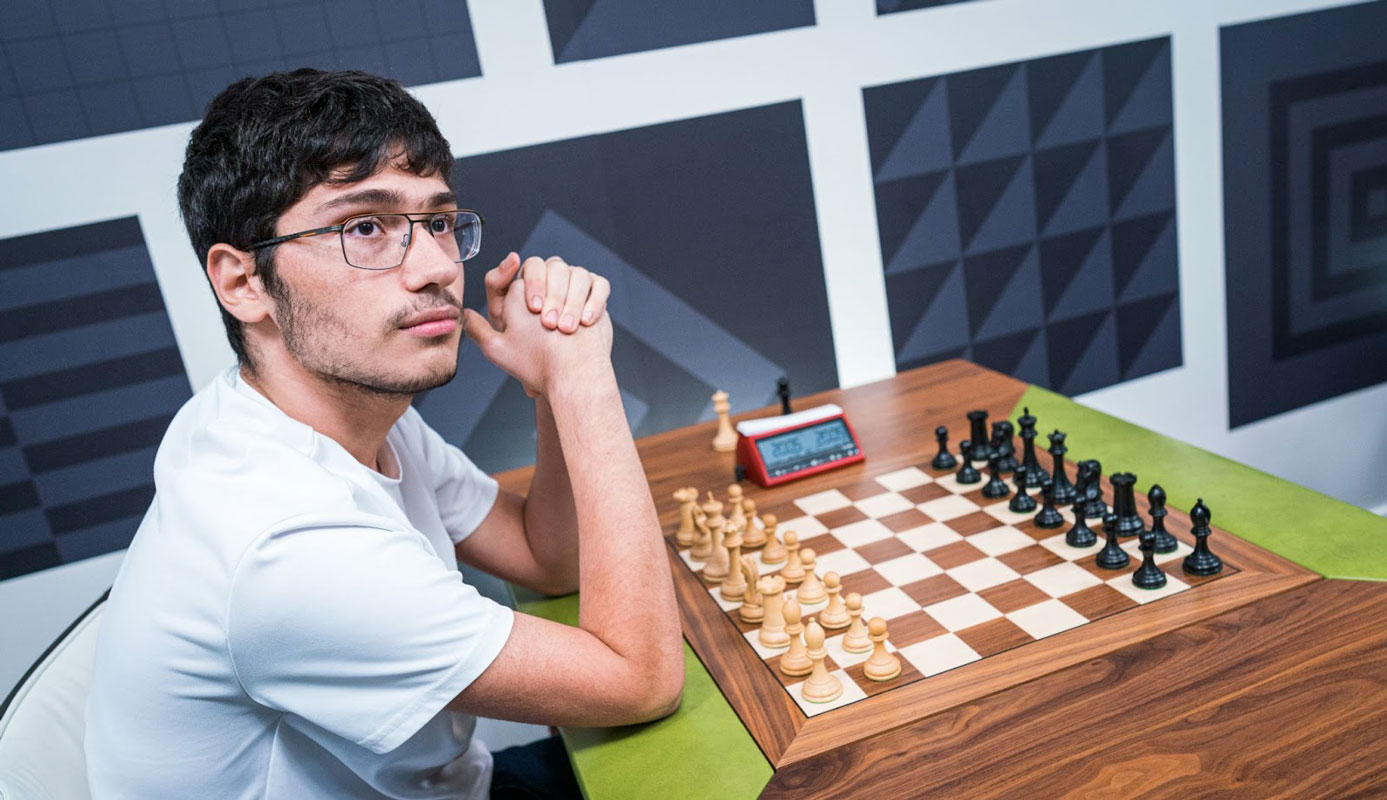 The 19-year-old also received some praise from Garry Kasparov:

He definitely looks very strong for his age, I would not be surprised if he makes it. By every count he might be a real contender for the title. Naturally his outstanding performance in these tournaments is just more proof that he's really good.

Mamedyarov and Nepomniachtchi had to settle with 3rd and 4th, but were positive about playing the variant.

Kasparov could not follow up his 5th place from last year, and only collected half a point against Peter Svidler, finishing dead last. As usual he managed to achieve several good positions, but eventually got into time trouble and lost. Afterwards, he said:

I think there were very high expectations after my performance last year here, but last year I did some chess. This year when I arrived here I just realized that I didn’t play chess, over the board, for a year. And obviously the latest events in Europe, and all the war in Ukraine, consumed my energy and attention. Some games here made me feel really good, but of course I wanted to do better.

The Champions Showdown: Chess 9LX tournament is one of the few over-the-board tournaments played with the popular chess variant.

This year's event served as a prelude to the official World Championship which takes place in Iceland in October, with Magnus Carlsen and reigning champion Wesley So confirmed. Online qualifiers are still ongoing.

The next event in St Louis, is the $250,500 US Chess Championship which begins on October 4. Lineups are yet to be announced.