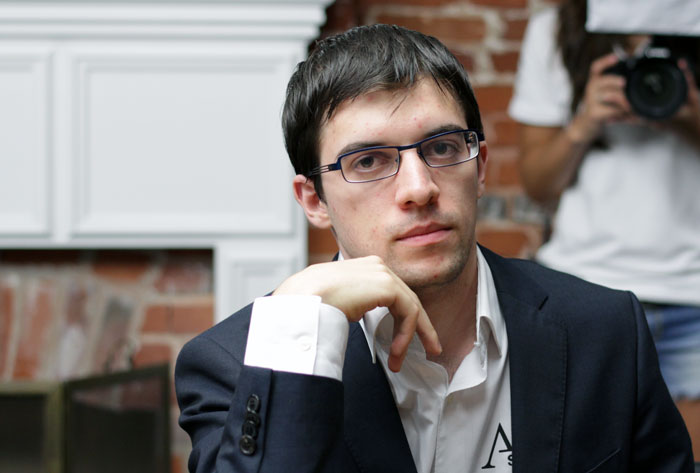 Vachier-Lagrave about to be caught in home prep | photo: Macauley Peterson

Today was not Maxime Vachier-Lagrave's day. The French number one is the dark horse in the running for the Sinquefield Cup, and he's now fallen behind after two rounds.

Fabiano Caruana used precious little time in an opening he had prepared deeply for a game against Shakhriyar Mamedyarov earlier this year.

Although Caruana had expected a Sicilian Najdorf, he nevertheless recalled his earlier work on the variation chosen by MVL up to move 17.Rf2. The Frenchman couldn't cope with his predicament.

It was clear that I was not functioning properly for some reason, and I thought things would go wrong after I got caught in the opening. It's a position you cannot really expect to play perfectly...congrats to Fabiano for his homework and also for his powerful play to finish it off.

Caruana explained, immediately after the game, that the computer evaluation is misleading in the dynamic and materially imbalanced position which arose. (Replay the game)

Veselin Topalov's woes continued against Aronian, who initially fell into a known opening trap in the a6-Slav which cost him an exchange, but managed to turn the tables and put Topalov on the defensive. 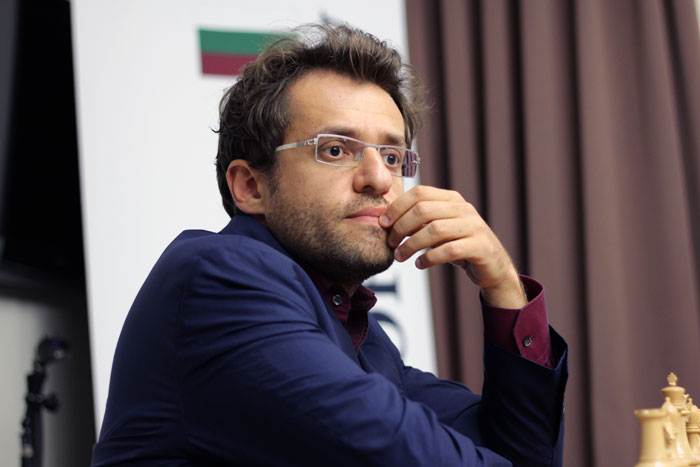 "I thought to play something rare, but he was well prepared" | photo: Macauley Peterson

After 26.Kc1, Black was already in dire straits, but Topalov's next move 26...Qf6? allowed Aronian to put the game out of reach. White's dreadful pawn structure is of no concern with a pair of laser bishops:

White played 27.d7+! and after any king move he has Bd4 winning material.


It's not every day that a 2770 player finds himself down a full piece after less than 30 moves! 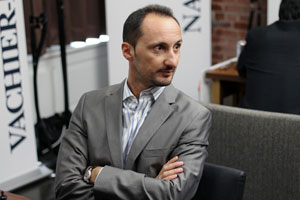 The most fun rivalry in chess

World Champion Magnus Carlsen started the tournament with two blacks, so he can be content with his 50% start. Nakamura has never beaten Carlsen in a classical game, although he came within a nanometer in Zürich last February.

Boy, was it hard to decide on a game to annotate today. Caruana-MVL had crazy tactics, superb opening preparation and another win for the fabulous Fab. Aronian-Topalov featured creative opening play, strange blunders, twists and turns and Topalov losing to his trademark exchange sac. But in the end, I could not decide against the the most fun ― and most one-sided ― rivalry in chess today. 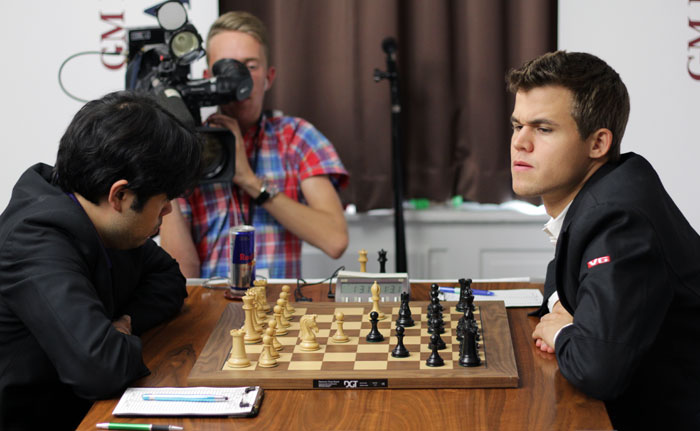 1. e4 e5 2. ♘f3 ♘c6 3. ♗b5 g6 No Berlin! Carlsen seems to have acquired a book on offbeat Spanish lines recently. At the Olympiad, 3...Nd4 did not treat him kindly. So today, he unleashed the next chapter, g6. Respectable, but rare. Fun little detail: The strongest player to employ this line before yesterday was... Hikaru Nakamura. He used it to beat Anand...which is Carlsen's next big goal (if that match happens and all that). Moving on...

4. d4 is another critical test.

6. ♗a4 Nakamura deviates from his own (black) game.

6... d6 7. d4 ♗d7 A well-known position. Nakamura now decides to follow one of his great predecessors, a guy called Fischer.

8. d5 The classical approach. White closes the center and steers the game towards a King's Indian structure.

8. ♖e1 is another popular and cunning move, waiting to see what Black does before determining the situation in the middle.

8... ♘ce7 9. ♗xd7+ ♕xd7 10. c4 The aforementioned structure appears. Now, in a normal KID, we are used to Black trying to checkmate the white king with f5-f4, g5, h5 etc. However, things are a bit different here. The light-squared bishops have left the board. It's considered close to common knowledge that without light-squared bishops, a black kingside attack is bound to fail. He's going to have to do something else. Lets see what MC is up to...

10... h6 A necessary preparation for Black's next.

12. ♘e1 is the most common move here, planning to put the knight on d3 instead.

15... bxc6 looks quite playable as well, but Carlsen has his eyes set on that d4-square for the horse.

17... ♖ac8 18. ♘e2 ♘h5⁉ We have lift-off! This move drastically changes the nature of the position and initiates the fight. What does not change is the evaluation ― it is roughly equal.

19. ♘xd4 Nakamura does not have to be asked twice to accept the challenge. The solid

19. g3 was an option, controlling f4 but not really asking questions.

19... exd4 20. exf5 This looks like one of those cases where an experienced coach might speak about the static-dynamic balance. I never quite got it, but my interpretation is that with Nh5 Carlsen has given up the static soundness of his position. To justify that decision, he has to proceed dynamically. Before embarking on such a decision, you better make sure that a dynamic solution exists...

21. f6! I like this decision as well. Nakamura returns the pawn, but makes sure the black structure stays as it is and that the black army becomes uncoordinated. Whatever piece shows up on f6 can be hit with a future Ne4. What was wrong with pawn grabbing, though?

23. ♔g2 ♘g5 Still in dynamic mode - the h3-square is vacated for the queen while the knight gets the assignment to cover e4.

24. ♕b1! The thing about these top players is that they make the best move a lot! By attacking g6, White gains precious time to coordinate.

24... ♔h7 25. ♕d3 ♗e5 Squeezing some more activity out of the position. The bishop gets ready to give his life on g3 for the greater good. Because of Nakamura's strong play, the greater good is no better than a draw this time around.

26. ♖ae1 The most natural move, allowing Carlsen to carry out his (drawing) combination.

26... ♗xg3 This looks flashy, but this kind of sac is child's play for these guys.

A well played game by both sides yet again. Carlsen's opening experiment was a success. He got a reasonably pleasant position starting with 14...c6. Nakamura did not commit a single inaccuracy along the way and correctly diffused the World Champ's attempts to confuse matters with 18...Nh5. Good moves like 21.f6 and 24.Qb1 led to the logical outcome. Draw.

Nakamura still hasn't beaten Carlsen in a tournament game. And Carlsen is yet to win a game this tournament, but two well-played draws with Black are hardly cause for concern.

Before joining the live webcast, Carlsen briefly summarized the game in his own words, and also addressed a minor controversy surrounding recent comments about Nakamura to Norway's TV2 in which he described the American as "inept", albeit light-heartedly. Take a look:

Friday's Round 3 will feature the clash of Carlsen vs. Caruana. Don't miss that one!


Full on-demand replay of Round 2: