Fabiano Caruana and Magnus Carlsen will already play a World Championship warm-up on Saturday in Round 1 of the GRENKE Chess Classic. Incredibly that’s the fourth closed tournament in a row that they’ve clashed in Round 1, with three draws, though Carlsen beat Caruana in Round 8 on the Isle of Man last year. Caruana will hope for a better start than his second Rustam Kasimdzhanov, who crashed to a loss in Round 1 of the GRENKE Chess Open in the same venue.

The moment Fabiano Caruana was anointed the next World Championship Challenger in Berlin on Tuesday, thoughts immediately turned to the fact that they were both playing in the GRENKE Chess Classic. Fabiano responded to a question on whether he had a message for Magnus:

We’re actually going to play in a few days, so hopefully I’ll send a message there!

This year’s GRENKE Chess Classic has grown to 10 players, with Vishy Anand the big addition to Carlsen, Caruana, Aronian and MVL, who all played last year, while Nikita Vitiugov plays after winning last year’s open.

The first 3 rounds are again in Karlsruhe over Easter, before the players move to Baden-Baden for the final six rounds. The event only ends on April 9th, so we might have had to wait to see the big clash, but no – they were paired against each other immediately in Round 1! Check out the full pairings:

As we mentioned, that had also happened in the last three closed tournaments where the two players both competed:

The last decisive game between the two players was in the penultimate round on the Isle of Man, when Carlsen won with the black pieces. 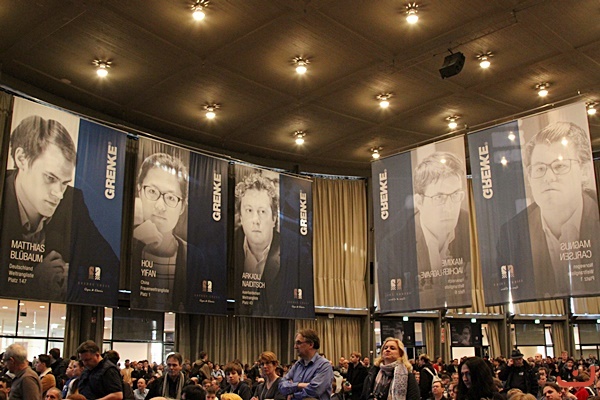 The Classic players tower over the massed ranks of those involved in the Open | photo: Georgios Souleidis, official website 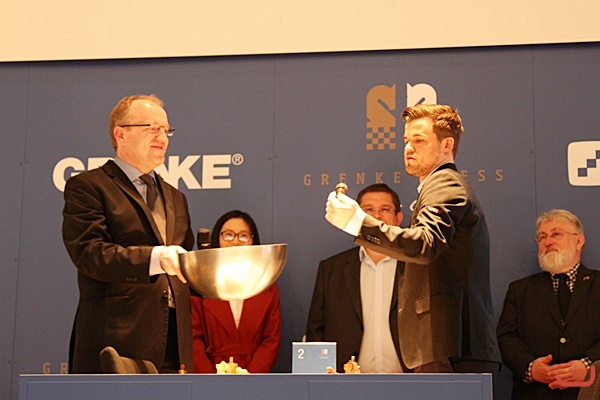 Magnus will be looking to win a second supertournament in a row -  it's a long time since he did that! | photo: Georgios Souleidis, official website

The first round pairing for the GRENKE Chess Classic is probably good news for Caruana. Of course fatigue is likely to be a factor after the Candidates Tournament, but Fabiano must still be riding a wave of euphoria, while traditionally Magnus is a slow starter. If Caruana gets through the first game intact he should be able to ease himself into the tournament, since he was White in three of the first four games and his other opponents are the less formidable Bluebaum, Meier and Naiditsch. 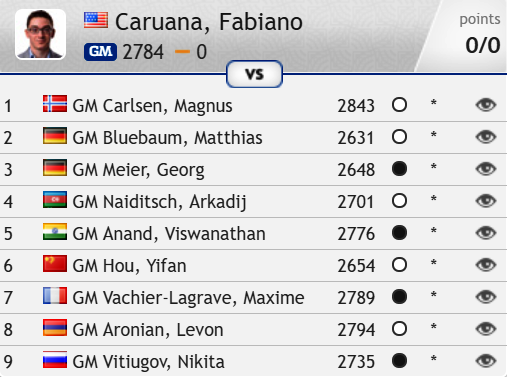 Levon Aronian, last year’s runaway winner, is the other player to continue straight after the Candidates. While his first game against Georg Meier isn’t the hardest of tests, he then has Black against Anand, MVL, Carlsen and Caruana in the remainder of the tournament! 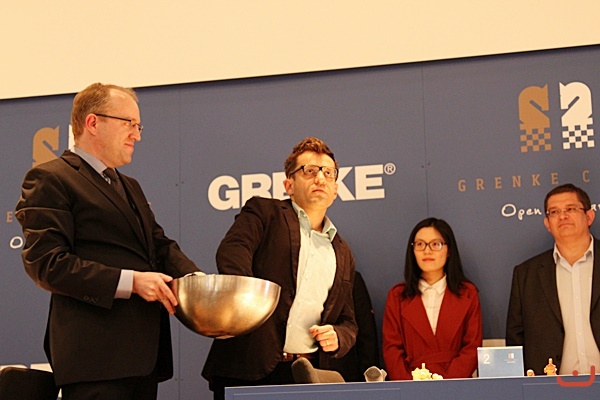 That’s tough, though of course an in-form Levon will relish the challenge, while it also means he has White against players he should be able to beat. But what kind of form will Levon be in? Well, it’s hard to imagine he can play as badly as he did in the Candidates, while he admitted himself that for the last few rounds there his thoughts had turned to the next tournament. Expect a comeback, though it’s unfortunate for Levon from the point of view of rating that he’s still defending his 2794 official rating and not the 2767.4 live rating he now has.

Other players with Black in three of their first four games are MVL and Hou Yifan, with the women’s no. 1 facing an uphill struggle to bounce back after her disappointing tournament in Wijk aan Zee. She’ll be looking to avoid a third classical loss in a row with Black against Vishy Anand when they meet in Round 1, and she follows that with Black against Carlsen, White against MVL and Black against Aronian!

The first three rounds of the GRENKE Chess Classic take place alongside the massive GRENKE Chess Open in Karlsruhe. 1482 (!) players are taking part, including 787 in the A Open alone. Check out video from the first round, including the drawing of lots:

The A Open includes stars such as Etienne Bacrot, Richard Rapport, Wang Hao and Dmitry Andreikin, but the sensation of the first round suggested something of a Candidates hangover for Fabiano’s second Rustam Kasimdzhanov. 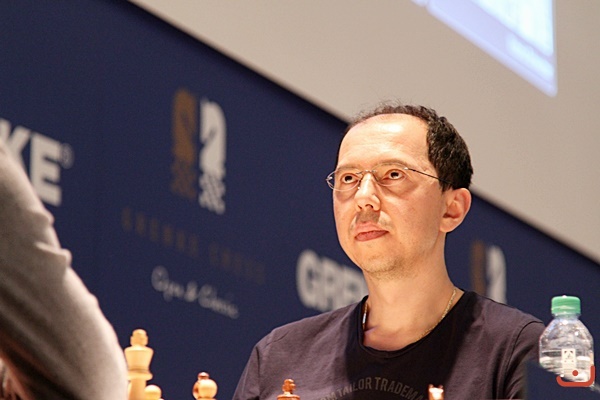 Nothing he does on the chessboard this week will take the shine off Rustam Kasimdzhanov helping Caruana to a World Championship match | photo: Georgios Souleidis, official website

His 2148-rated untitled opponent Pascal Karsay had just found the nice shot 26.Bxf5!, but there was no reason to collapse on the spot: 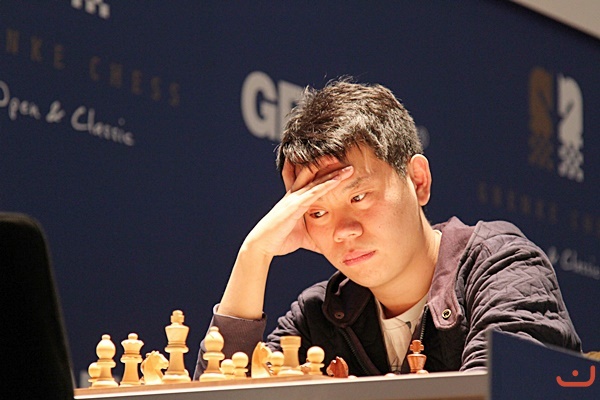 Talking of blunders… Radio Jan is back!

Two rounds of the GRENKE Chess Open are being played on Friday, but due to local laws in Germany it’s possible to play chess on Good Friday but not to broadcast it live. Don’t worry, though, when the GRENKE Chess Classic starts on Saturday every moment will be live, with Jan Gustafsson joined by Peter Leko to commentate from the venue!