Carlsen wants to change the world

Magnus Carlsen has both won and defended his World Championship title in a match, but today he returned to an old theme – his desire to change the system to remove the privileges for the World Champion. He proposes, “a more just system,” involving, “an annual knock-out event, similar to the World Cup”. Would that give all the world’s top players a chance and attract more media coverage, or would it simply be a return to the unloved FIDE World Championships of 1998-2004. What do you think? 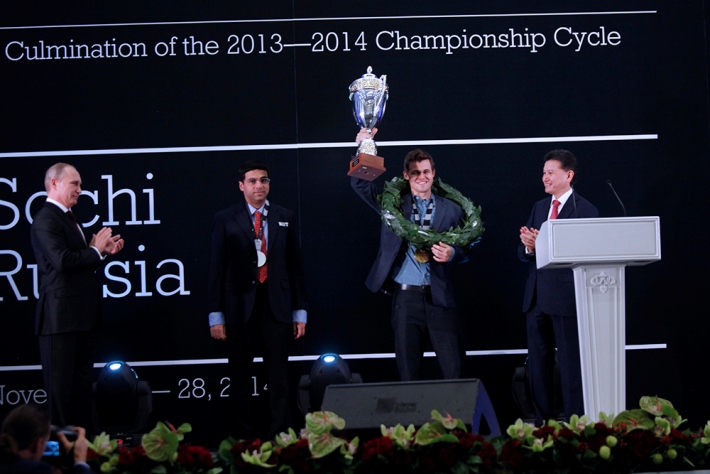 Even the presence of Vladimir Putin at the Closing Ceremony of the 2014 Carlsen-Anand match failed to get much media attention in the West - could a new system draw new fans to the game? | photo: Anastasia Karlovich, FIDE

Magnus Carlsen, who will play in the Sinquefield Cup that starts on August 23rd, expressed his opinion on Facebook (click "see more" to read it all):

In advance of travelling to the US to prepare for the Sinquefield Cup, I felt it important to share with you something I...

You have to admire Carlsen’s consistency. All the way back in 2010 he already withdrew from the 2011 Candidates Matches in protest at the existing system:

In my opinion privileges should in general be abolished and a future World Championship model should be based on a fair fight between the best players in the World, on equal terms.

Now that he has all the privileges – even if he lost his next match in 2016 he’d qualify directly for the next Candidates Tournament – it would be easy to accept a status quo that suits his own interests. Instead Carlsen wants to upset the apple cart. So you can’t accuse him of self-interest… but is he right?

A few quick points for and against might be as follows:

1) The end of privilege

At the moment the Champion has a huge advantage over all his rivals for the World Championship crown, since he can simply wait two years to play someone who’s had to fight through a tough qualification cycle. The new system would end that and, as in football, holding the title would be a matter of prestige rather than a competitive advantage. We might be more likely to see the strongest player in the world at that moment in time become the champion.

2) A simple system to understand

It’s been pointed out that anyone can understand a knockout system to determine a champion, while the system of Candidates Tournament participants chosen by rating + World Cup + Grand Prix + privilege + wild card only then playing a tournament to determine a challenger for a match is a little less user friendly

If all the best players are involved in a single hugely important tournament it should be possible to attract media coverage from all around the world. Chess is not going to compete with the football World Cup any time soon, but could this be a first step to breaking into the mainstream?

Carlsen’s comments are perhaps poorly timed, since after enormous struggles we finally appear to have a World Championship system most people are happy with. The knockout system has gained acceptance as a Candidates qualifier and this year’s World Cup in Baku will feature Topalov, Nakamura, Caruana, Giri, So, Kramnik, Grischuk and co. – perhaps only the absence of Magnus Carlsen himself can stop it from being the chess event of the year. The Grand Prix offers a great chance for elite players who aren’t quite supertournament regulars, while the Candidates Tournament has the potential to be an incredible tournament in its own right – it’s enough to mention London 2013. 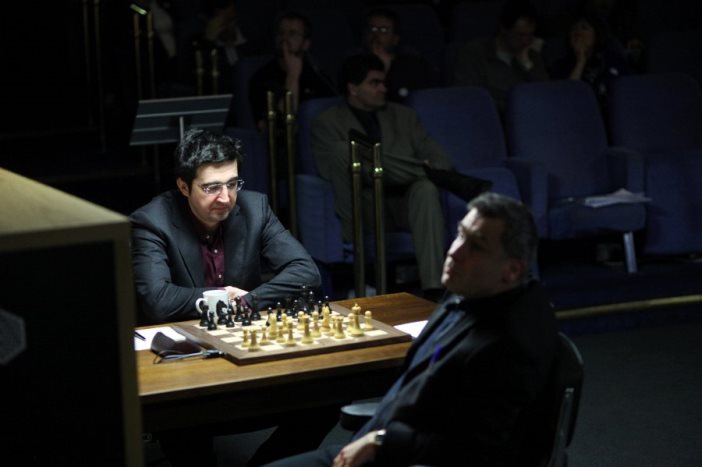 The drama of both Kramnik and Carlsen losing in the final round of the 2013 Candidates Tournament is unlikely to be beaten any time soon! | photo: Anastasia Karlovich, london2013.fide.com

As Magnus himself admits, the matches draw, “massive interest from both the media and the public”. The two-year cycle – if FIDE can keep to it - also seems about right to most observers.

The use of knockouts to determine the World Champion was FIDE President Kirsan Ilyumzhinov’s big idea from 1998-2004, but led to a series of World Champions, including Alexander Khalifman, Ruslan Ponomariov and Rustam Kasimdzhanov, who never quite achieved full legitimacy. The knockout system with short matches – and if you have long matches it’s hard to see how you can fit in a big World Championship each year – inevitably increases the element of chance, even if the results are by no means as random as the critics of knockouts proclaim.

The system is in fact still in use every other year for the Women’s World Championship, which has seen Hou Yifan’s reign as champion interrupted by Anna Ushenina and now Mariya Muzychuk. The prevailing opinion, though, is that it would be better for the women to move towards the men’s system and turn the knockout World Championship into a World Cup. The big obstacle on that path is money.

3) A break with history

Two centuries of chess history is tied up with the idea that a challenger needs to defeat the reigning champion in a face-to-face match to seize the crown. Do we want to abandon that idea? Would any new champion after Magnus Carlsen be able to gain the same prestige under a new system? And how is Magnus supposed to catch up with Kasparov's total of match triumphs?

Let us know what you think in the comments below!