Magnus Carlsen left Norway for the first time since the Tata Steel Masters not to head straight to Sochi, Russia, but for Pamplona, Spain, where a city famous for its Running of the Bulls is this year celebrating the San Fermin Festival with a €50,000 chess festival. Magnus played from a room where Ernest Hemingway stayed as he set up a showdown with Wesley So, while Levon Aronian will take on Ding Liren after his match against 16-year-old Nodirbek Abdusattorov went all the way to Armageddon. 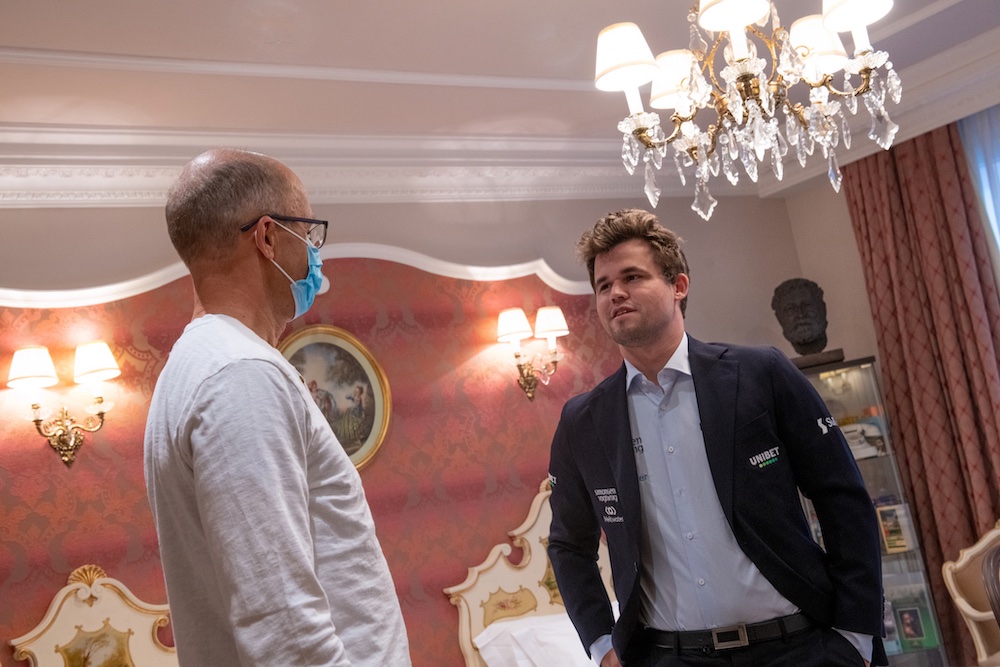 The San Fermin Masters is an 8-player blitz knockout with a €20,000 top prize. Four players were invited, while the remaining four battled through various qualification events over the last month. 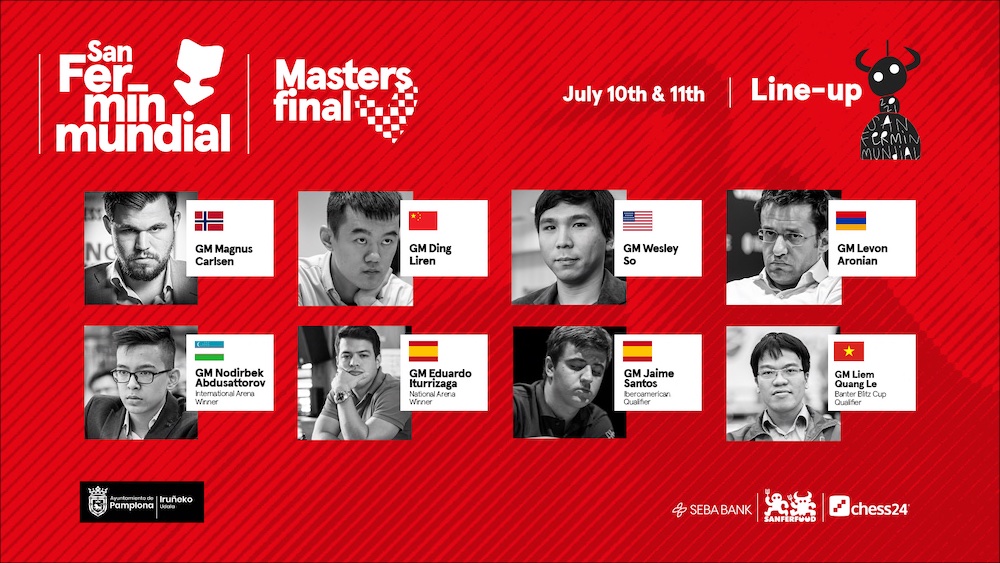 The format is 3-minute blitz, with a 2-second increment each move, and it’s best of eight games i.e. first to 4.5 points wins. If the score is tied 4:4 two more blitz games are played, and if still tied we get Armageddon. You can follow all the games here on chess24.

The quarterfinals on Saturday saw the invited favourites win, but it was by no means easy!

The games in the San Fermin Masters are played on chess24, but Magnus Carlsen is actually in the northern Spanish city of Pamplona, which meant his day before the quarterfinal match was jam-packed with activities and strange encounters — "guiri" is a Spanish word for a foreigner, though it's a bit more complicated than that!

The San Fermin Festival is famous for the crazy bravado of the Running of the Bulls, when festival-goers try to outrun bulls through the streets of the city, with predictable results.

American writer Ernest Hemingway attended the festival nine times and set his novel The Sun Also Rises in the city. This year and last, however, the pandemic has prevented such mass festivities, which is where a chess event with the World Champion came into play.

Magnus is playing from the Ernest Hemingway suite in the Gran Hotel La Perla — of course he corrected the missing “way”, but not in time to stop Giri!

The quarterfinal match against Eduardo Iturizzaga, formerly the Venezuelan no. 1 and now representing Spain, looked like it might be easy for Magnus, but only for one and a half games! He scored a crushing win in the first game, then was dazzling his second Laurent Fressinet in the next.

Magnus did in fact go on to win the game, but only after being totally lost — there were raised eyebrows and an apologetic shrug at the end.

In the next two games Magnus was also lost, but this time he “only” went on to draw, later commenting, “Every game I was blundering something and he was tricking me!”

Just when Magnus looked set to finish with a flattering 4.5:1.5 victory, Eduardo pulled a game back, but in the final game he took a draw by repetition in a game he had to win — the computer in fact suggests Black is better after a5 in the final position.

Magnus admitted he’ll have to play better in the semi-finals, when he faces his biggest online rival this year, Wesley So.

Wesley literally raced to victory, saying afterwards that he’d been practicing for the event by playing bullet chess. We’re used to extreme precision from the US Champion, but this time he played fast and well, but left Vietnamese no. 1 Liem Quang Le with some big chances, for instance in the first game, which he ultimately won on time.

The most memorable chance was in the final game, where for one move only Liem could have snatched a win.

28…Be1!, threatening mate on f2, would have won Wesley’s queen and the game.

Like Wesley So, Ding Liren isn’t playing the FIDE World Cup. The reason is also related to COVID — Ding told Laurent Fressinet when interviewed afterwards that it’s hard for Chinese players to get permission to travel and then they’ll need to spend at least two weeks in quarantine on return. He also mentioned that he “had to” play a Chinese tournament for his province at the same time, against the likes of Wang Yue and Ni Hua.

In any case, he was in sharp form in the San Fermin Masters, even if he did miss a win in the first game.

Game 3, in particular, was crushing for Ding.

Spanish star Jamie Santos did manage to hit back and pick up a game, but overall it was a comfortable victory for the world no. 3.

This was match of the quarterfinals, with 16-year-old Nodirbek starting out very strong and ultimately pushing Levon all the way to Armageddon.

Levon had to draw on all his opening knowledge and trickery to get back into the match.

The final Armageddon game initially looked as though Abdusattorov should easily be able to get the draw he needed with the black pieces to clinch the match, but Levon gradually took over until he spotted that 25…Kf8? was a blunder!

After 26.Bb1! Nodirbek admitted his mistake with 26…Ke8, but it was too late, and after 27.Bxd3 cxd3 28.Rc6 White was totally dominant. A relieved Levon was through to the semi-finals. 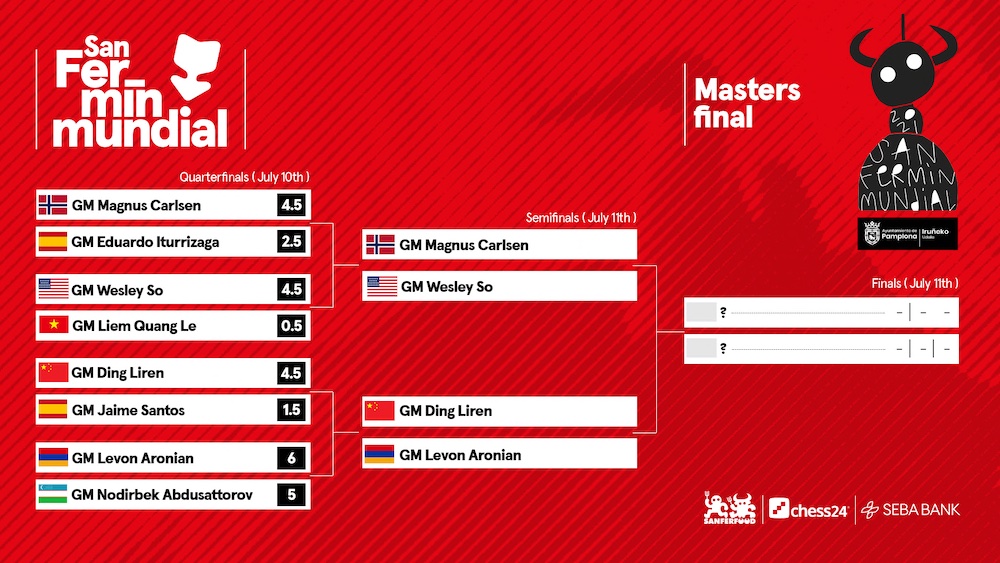