Magnus Carlsen takes on Sanan Sjugirov in today’s first Banter Blitz Cup semi-final and finds himself in an unusual position: the World Champion has played two, lost two against his Russian opponent, blundering a piece in both the 2010 Olympiad and the 2017 World Blitz Championship! The other semi-final sees a clash between perhaps the two fastest players in the event, 16-year-old Alireza Firouzja and Indian GM S.L. Narayanan. 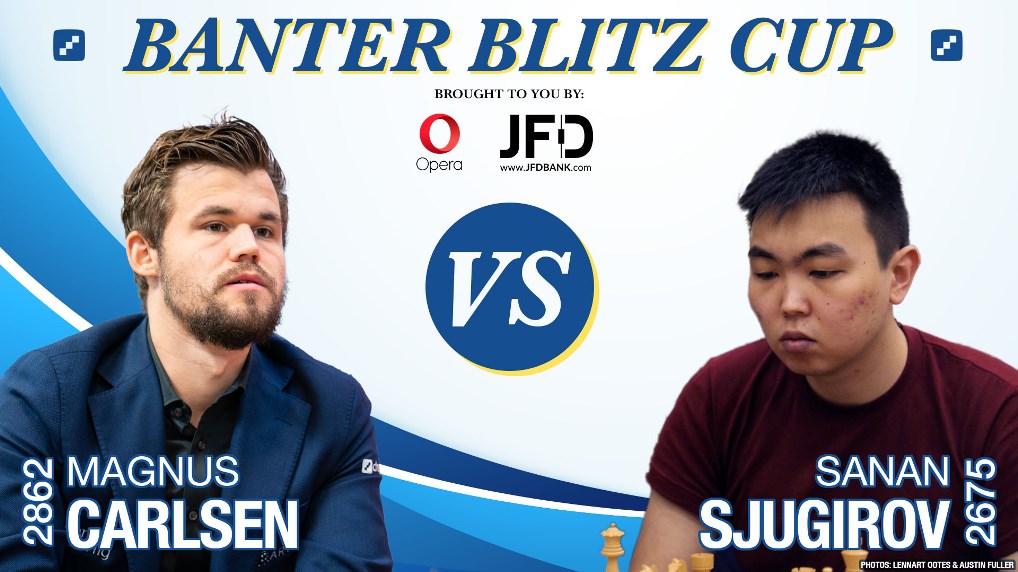 Carlsen has a chance for revenge against Sjugirov

We’re down to the last four of the Banter Blitz Cup:

You can replay all the games with computer analysis below – note we’re now also broadcasting the games live here as an alternative to watching on our shows page:

Carlsen gets chance for revenge vs. Sjugirov

It was clear that Norwegian no. 1 Magnus Carlsen taking on Swedish no. 1 Nils Grandelius was going to be fun from the outset, with Magnus beginning:

We have the ridiculous situation in that we have a Norwegian and a Swede playing and we’re talking English!

He then switched languages for a while, before going on to blast his way to an undefeated 9:1. That was far from the full story, however, since Nils had winning positions in at least four of the games. Nils wasn’t exactly slow, as you can see from his attempt to mate with bishop and knight after a truly rollercoaster 2nd game…

…but Magnus was always faster! There were also huge missed by chances by Nils in Games 4 and 5. For instance:

Those were fascinating, complicated struggles, but if you just want to watch one game it should be Game 6, where Magnus went for a spectacular queen sacrifice:

It’s too much fun not to do! I had good alternatives like 21.Qd2, but who cares! I wanted to do this.

The computer doesn’t entirely approve, but it all went perfectly. Magnus commented:

That was a fun game! Finally one that I can be pretty happy with, I think, with a queen sac - a game that started out sort of dull in the opening really caught fire. Good stuff!

Here’s the full game (Magnus had some issues with his computer’s USB settings for the mouse and particularly the webcam):

You can also rewatch the whole match for the perspective of either player: Carlsen, Grandelius

We’re going to have the first Magnus Invitational – not my choice of name, but still I’m not complaining, obviously. I’m loving the format. You’re going to see exciting matches every day and hopefully it’s going to be something that both the public and also the players are going to enjoy a lot in these not so joyous times!

Before that Magnus has at least a Banter Blitz Cup semi-final to deal with, where his opponent will be 27-year-old Russian Grandmaster Sanan Sjugirov.

Sanan built a platform to victory with four wins in the first six games, when again and again he was just too fast and tactically alert for Ray Robson in the final stages. That seemed to break the US Grandmaster’s spirit, though Ray posted four wins and only finally succumbed in a manner that summed up the match – he ran out of time with mate-in-2 on the board, giving Sanan (playing Black) the draw he needed to reach the semi-final:

That sets up a Carlsen-Sjugirov semi-final, which is a curiosity, since Sanan Sjugirov has a 2:0 score against Magnus. Their first meeting was in the Khanty-Mansiysk Olympiad in 2010. Magnus was already the world no. 1 with a 2826 rating, but he lost three games, to Baadur Jobava, Mickey Adams and Sanan Sjugirov:

Their second encounter came in Round 2 of the 2017 World Blitz Championship. Here 30…Bd4? again blundered a piece:

Their semi-final takes place at 18:30 CEST today! Don’t miss it:

…and had a winning position at some stage in four more, but, like Magnus, Firouzja was simply too fast in the critical moments.

Meier’s speed and accuracy had been too much for young stars Parham Maghsoodloo and Jan-Krzysztof Duda, but here he had to acknowledge meeting his match:

Game 5 was the 11th Banter Blitz Cup win in a row for Firouzja (he won the last 6 games against Bluebaum!) and it was perhaps the most memorable of the match. A complex game featuring some nice tactical tricks (e.g. 27.Bxd7!) ended suddenly after 30.Qc3:

Meier thought for 9 seconds, a significant time in 3-minute blitz, before “forcing the queen exchange” with 30…Qb4?? That would have been a good move, if not for the minor issue of 31.Qg7#!

That was an echo of another famous game, from 2006, when the then World Champion Vladimir Kramnik, with 30 minutes left on his clock, decided to offer an exchange of queens to the computer chess engine Deep Fritz with 34…Qe3??:

Kramnik was just getting up, happy with his position, when the computer's operator apologetically executed the winning move: 35.Qh7#

You can replay that game by Firouzja below:

The match was finally ended by a neat but not so difficult tactic:

And here are the full streams of both players: Firouzja, Meier

Firouzja’s opponent in the semi-finals will be perhaps the player who’s played fastest apart from him: 22-year-old Indian Grandmaster Sunilduth Lyna Narayanan. In this match he came up against another very fast player, Venezuela’s Eduardo Iturrizaga, and had the handicap of suffering a power cut mid-match and then later an internet failure. The match was balanced on a knife edge at 6.5:6.5, but Narayanan went on to win the last two games, with it only finally becoming clear it was over after 63…Qh1?

64.Re1! and there was no way back for the queen. Iturrizaga only resigned when it was mate next move.

Firouzja and Narayanan have met once before, playing out a manoeuvring draw in the final round of the 2018 World Junior Championship, when neither player had much left to play for. There’s much more at stake this time, with a guaranteed $9,000 for the winner, or $14,000 for winning the final!

First, however, we have Carlsen-Sjugirov at 18:30 CEST – don’t miss all the action LIVE here on chess24.