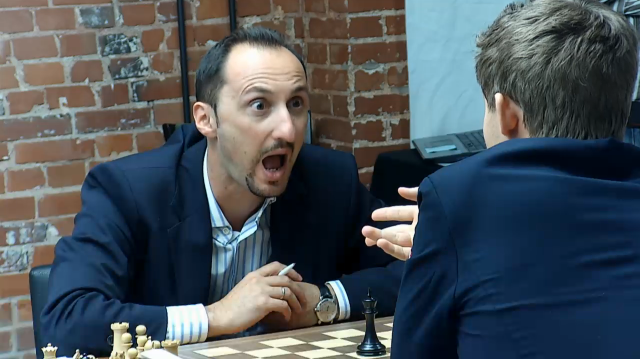 Carlsen informs Topalov of his decision - sorry, we couldn't resist using the best image from St. Louis one last time!

Two months from now the World Championship rematch between Magnus Carlsen and Viswanathan Anand will start in Sochi, Russia — and we can finally get excited about it! Magnus confirmed he’d signed one final autograph in St. Louis today — the match contract — ending months of doubt and the very real prospect of another debilitating split in the chess world.

Until the very last minute no-one knew which way Magnus was going to fall. In the post-tournament press conference he deflected questions on the match, and some observers, such as Norwegian specialist and chess24 author Tarjei J. Svensen, felt the choice was likely to be no:

Before the tournament had even begun it looked briefly as though Magnus would simply be replaced by Sergey Karjakin by default, since FIDE rejected a match postponement and insisted on a decision during the tournament, something Team Carlsen refused to provide. After the intervention of Emil Sutovsky, however, an extension was offered until the final day of the tournament – the one set aside for a play-off. Fabiano Caruana’s epic winning streak made that surplus to requirements, but there was still a hugely important decision to be made.

In the end, it was perhaps a continuation of the last round of the St. Louis supertournament — mildly anti-climactic:

So that was that. FIDE soon confirmed they’d received the signed contract. No sensational choice rocking the chess world to its foundations, but simply the prospect of another Anand-Carlsen match less than a year since Magnus Carlsen won the World Championship title in Chennai.

There will be plenty of time to assess Magnus’ decision, but let’s briefly look at what may have swung his decision (in no particular order):

With Magnus set to face fierce competition from the young generation and with a new real contender for the “strongest player alive at this moment in time”, it would no longer be as easy for Carlsen simply to bank on being the world no. 1, as Garry Kasparov and Veselin Topalov have tried in the recent past.

2. Two years with the crown

Although the prize fund on offer in Sochi has plummeted to perhaps half of that available for the previous matches in Moscow and Chennai, the chess calendar will return to normal after the match, meaning a full two years to enjoy the title — and use it to increase earning potential that may dwarf the actual money on offer for the match.

There’s no doubt Viswanathan Anand, after his wonderful Candidates Tournament performance, is a worthy opponent for Carlsen (Rafael Vaganian even expressed his conviction that "Anand won't lose"), but there’s also little doubt Carlsen sees the Indian legend as easier to beat that the new generation that are his age or younger.

4. The recent ceasefire in Ukraine

The latest shaky ceasefire suggests a glimmer of hope for the simmering conflict in Ukraine that has put Russia and the West at the closest point to hostilities since the dark days of the Cold War. Espen Agdestein confirmed to the Norwegian media in St. Louis that they’d received official word from the Norwegian government that no sporting sanctions are currently in place.

Although it’s tough to avoid politics when you become World Champion, as Vladimir Kramnik has often lamented, it’s unlikely Carlsen wanted to go down the same route as his great predecessor Garry Kasparov, especially as Kasparov himself admitted the split in the chess world he engendered in 1993 had been a mistake. Espen Agdestein commented:

He really wanted to play. He had a very good experience in India last year, he is World Chess Champion and he wants to defend his title.

As we pointed out when Sochi was first announced as the venue, Magnus visited during the Winter Olympics and seemed to enjoy his time there:

So the match is on! It’s time to prepare our supply of popcorn and also take a look at the form of the challenger Vishy Anand, who will face off against Levon Aronian, Paco Vallejo and Ruslan Ponomariov in the Bilbao Masters in little over a week’s time.

Magnus’ schedule, meanwhile, will take him to California and New York for the next week, before his pre-match preparations begin in earnest.

And finally, let's spare a thought for Sergey Karjakin, the man who could have been king if Carlsen had pulled out and he'd gone on to play and beat Anand in Sochi:

Translation: "It's strange, in general, that such an obvious decision as signing a World Championship contract caused Magnus so many doubts."