Magnus Carlsen will today celebrate his 32nd birthday by playing a MrDodgy Invitational semi-final against Sam Sevian at 17:00 CET. Magnus survived an impressive fightback by Kirill Shevchenko, while Sam overcame Jorden van Foreest. In the other match-up it’s Alexander Grischuk vs. Daniil Dubov. 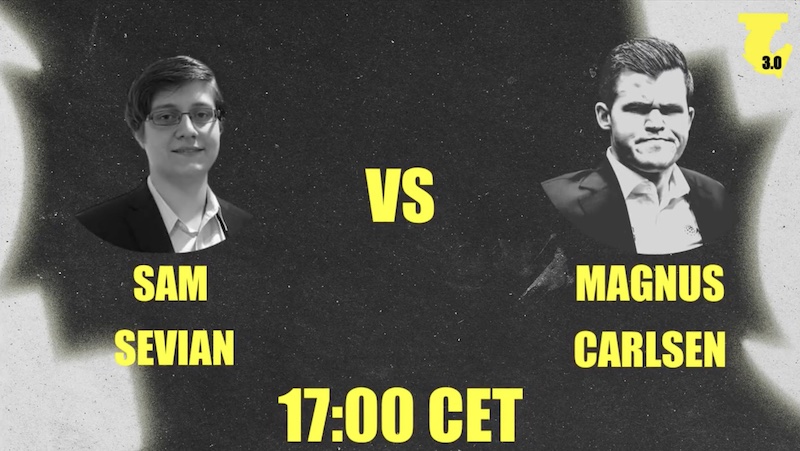 Magnus Carlsen has won the World Championship title on his birthday, so he’s used to being busy, but this year, for the first time, he’ll be playing in the MrDodgy Invitational while he celebrates his birthday.

In the quarterfinals Magnus faced 20-year-old Ukrainian Kirill Shevchenko, who had shown his fighting spirit in the previous round as he defeated Brazilian GM Luis Supi in Armageddon.

Magnus had destroyed Salem Saleh 7:0 in the Last 16, but he couldn’t repeat that performance in the quarterfinals.

A relatively smooth win in the first game suggested Magnus might have another easy day at the office, but in Game 2 he was already in trouble out of the opening.

It’s hard to fathom why the computer gives 16.a4! here as completely crushing, but later after 16.a3 Kirill did get a huge and obvious advantage, only to let Magnus escape with a draw.

A quick draw in the next game meant Kirill was well and truly in the match, but then Magnus threatened to pull clear again. He scored a trademark endgame win in Game 4 and then took over in Game 5 with 14.d6!

It was a puzzle at first why Magnus didn’t follow up 14…Bxd6 15.Bxf7+ Kh8 with the computer’s “obvious” 16.Bxe8, but on closer inspection White only wins there by meeting 16…Qxc1 with 17.Nh3!, giving up the h1-rook but bringing the knight to g5. In the game Kirill briefly had chances, but Magnus went on to win.

What followed, however, was described by Kirill as his favourite game of the match, as he went for 27.Rc5?! instinctively.

Watch the full commentary and interviews:

That was the start of a fantastic run as Kirill simply outplayed Magnus in the next two games, with no clear blunders, so that the score was 4:4. Something had to change…

Magnus found another gear and won the remaining three games in some style, with Kirill particularly impressed with how his opponent handled the endgames.

That took Magnus through to a semi-final against 21-year-old US Grandmaster Sam Sevian, who followed a 7:4 win over Vincent Keymer by taking down Jorden van Foreest 6.5:4.5. It was a tense match that reached 4.5:4.5 before Sam won the final two games.

In the other half of the draw Alexander Grischuk won the final 3 games to defeat Alan Pichot 7:4...

...helping him to get over the trauma of the day before, when he squandered a 5.5:2.5 lead against Andrew Tang and only managed to win in Armageddon. Grischuk said that "win" was more upsetting than losing a 3-hour Speed Chess match the day before.

Grischuk felt the mouse-speed and accuracy with which Andrew was able to play was somewhat wasted on online chess!

Grischuk’s opponent in the semi-final will be Daniil Dubov, who first crushed Chess.com's early TItled Tuesday before defeating Rauf Mamedov in Armageddon.

Again the Armageddon seemed avoidable, since Dubov raced to a 5:2 lead before blundering into mate-in-1. Then after two draws he only needed a third to clinch the match, but as he explained, he went for 20.Ne2? because he recalled Rauf is tricky with knights and he wanted to exchange off knights and keep things "solid".

It was a blunder, as Rauf struck with 20…Nxc2!, winning a pawn and eventually the game. You can’t play 21.Rxc2 due to 21…Rxd1#, not just picking up a rook but giving checkmate.

Rauf then suddenly crashed through in the next game to force Armageddon.

He explained he’d done no preparation for Daniil, however, and had run out of options with Black when he played the risky Pirc/Modern. He only needed a draw, but it was Daniil who this time got to execute a relatively simple mating attack.

So all that remains is get the popcorn ready and tune in for Carlsen vs. Sevian at 17:00 CET… will Sam go after the king?