Magnus Carlsen faces World Championship Challenger Ian Nepomniachtchi as the FTX Crypto Cup, the 6th event on the Meltwater Champions Chess Tour, begins Sunday, May 23rd at 17:00 CEST. One of the strongest line-ups ever assembled features the full Top 10, meaning a Tour debut for the last challenger and world no. 2 Fabiano Caruana. The last Major on the Tour offers a direct spot to September’s Tour Finals in San Francisco as well as a record online chess prize fund of $320k, with sponsors FTX providing a $100k Bitcoin bonus.

The strongest chess tournament ever? 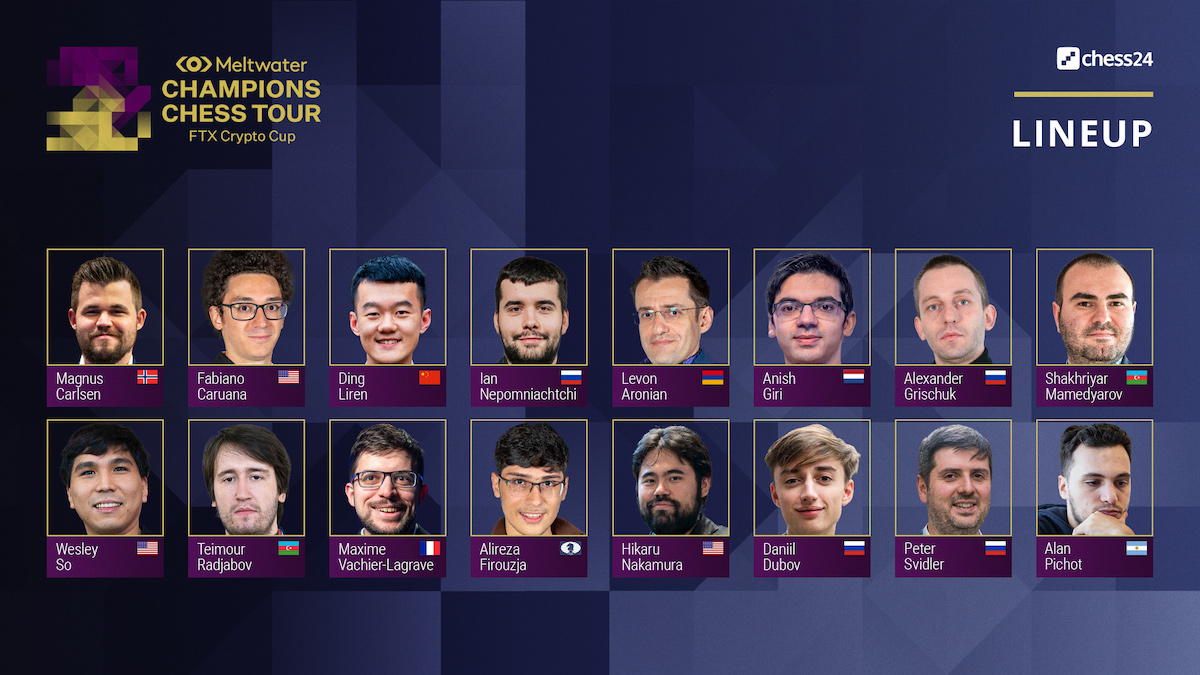 The FTX Crypto Cup, to be played on chess24 from May 23-31, may be the strongest chess tournament of all time, with the 16-player field including the complete Top 10 on the May 2021 FIDE classical rating list.

That means that world no. 2 and 2018 World Championship Challenger Fabiano Caruana is making his Meltwater Champions Chess Tour debut, while the players outside the Top 10 include Candidates runner-up Maxime Vachier-Lagrave, the world’s hottest junior Alireza Firouzja, and blitz world no. 1 and New in Chess Classic runner-up Hikaru Nakamura.

Back by popular demand

The only player who you would be shocked to see win the event is 23-year-old Argentinian no. 1 Alan Pichot, who was voted back into the Tour by chess24 premium members, alongside 3-time World Blitz Champion Alexander Grischuk. 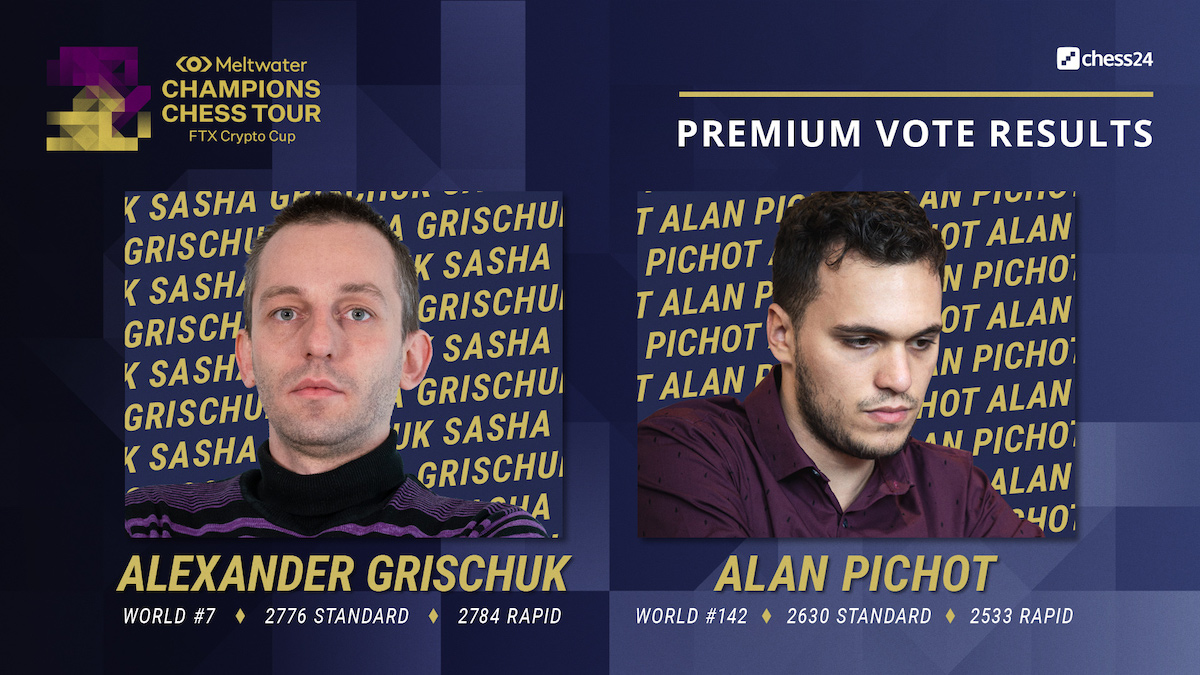 The most anticipated match-up, however, will be between World Chess Champion Magnus Carlsen and his newly-minted challenger. Magnus has the white pieces in Sunday’s Round 2 as they face off for the first time since Ian Nepomniachtchi won the Candidates Tournament to qualify for a World Championship match this November in Dubai. 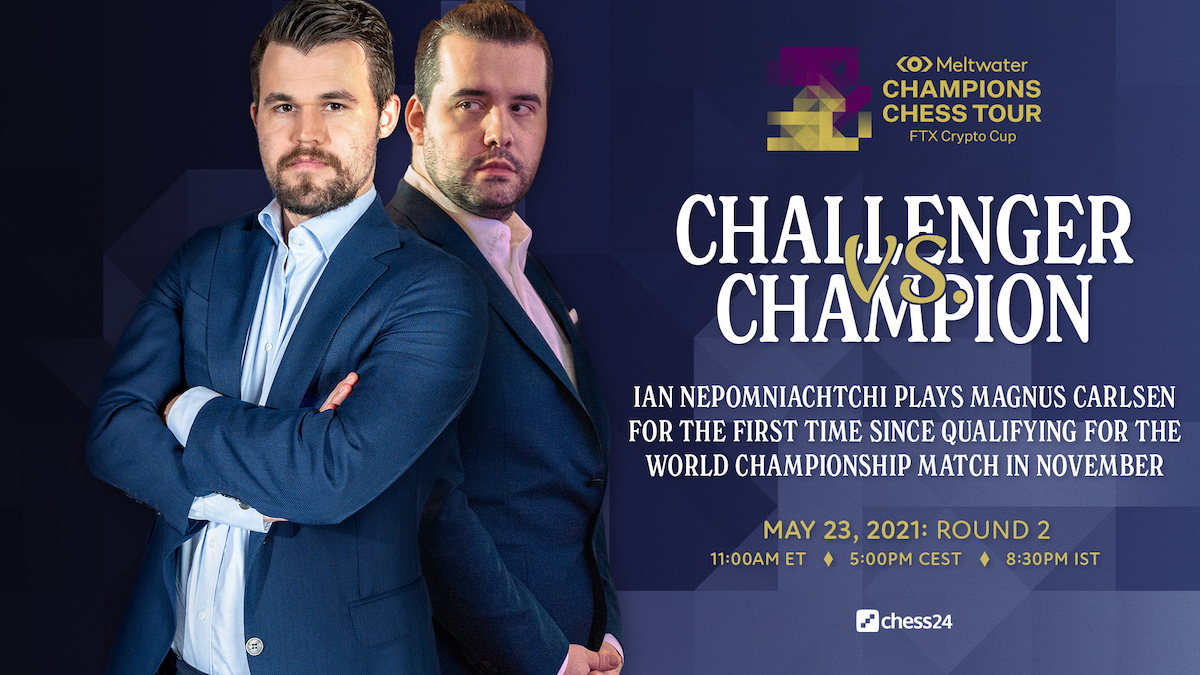 The full pairings are out for the FTX Crypto Cup

Those 16 stars must be reduced to 8 players in the 3-day preliminary stage, where they play each other once at 15 minutes + 10-second increment per move rapid chess.

The Top 8 then play a knockout, with each clash held over two days of 4-game rapid matches. If the match score is tied we get a playoff, where two 5+3 blitz games are followed, if needed, by Armageddon. White has 5 minutes to Black’s 4, but a draw counts as a win for Black. 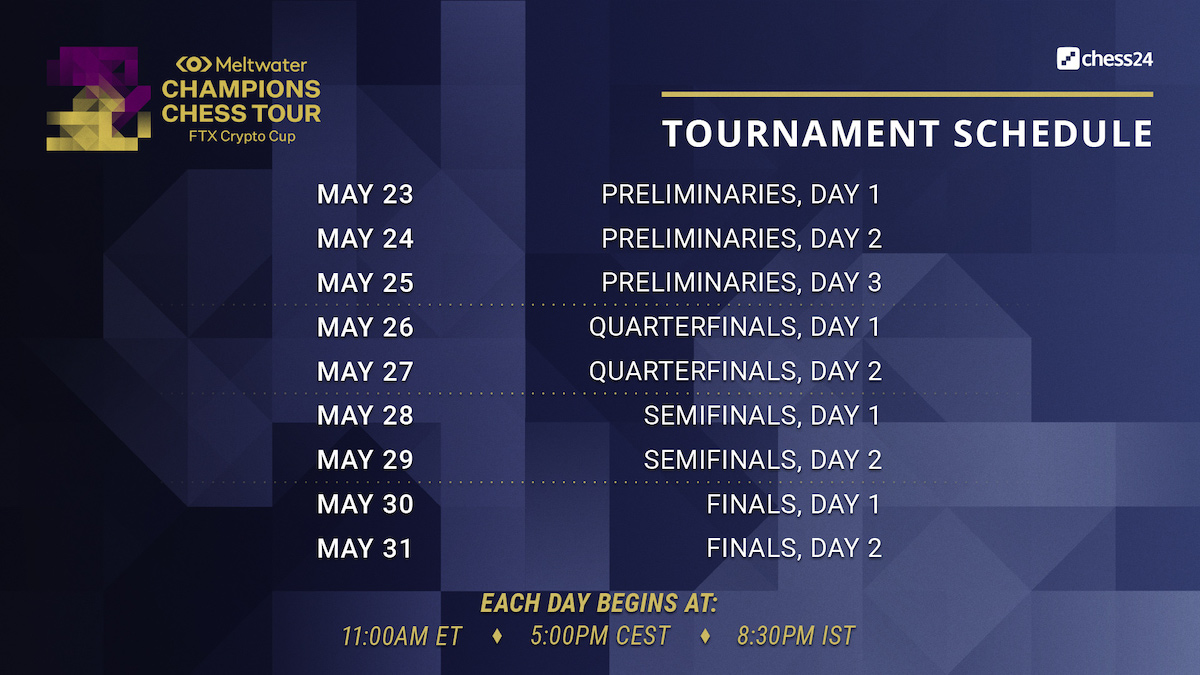 This is now the 6th event on the Meltwater Champions Chess Tour and, as you can see, it’s a big one. 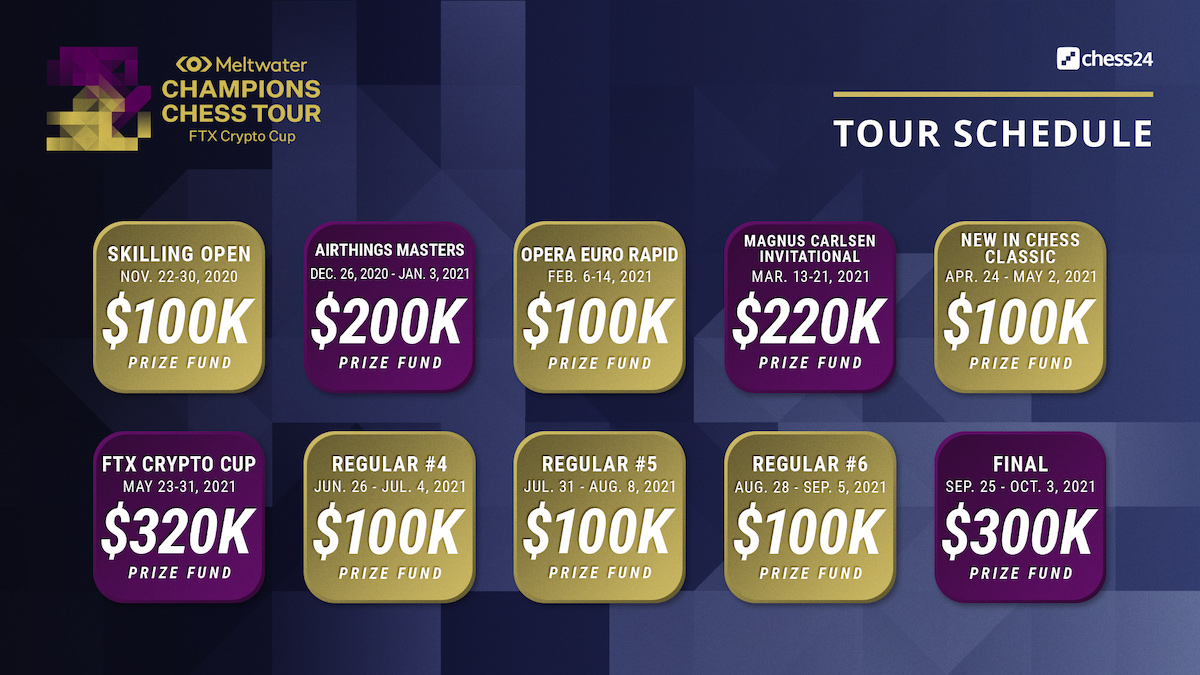 It’s the 3rd and final Major, with the winner guaranteed an automatic spot in the Tour Finals set to take place in the San Francisco HQ of Meltwater in September. So far the other Majors have been won by Teimour Radjabov (the Airthings Masters) and Anish Giri (the Magnus Carlsen Invitational).

The standard prize fund for a Major event is $220k (after the field was increased from 12 to 16 players), but this time there’s even more up for grabs! 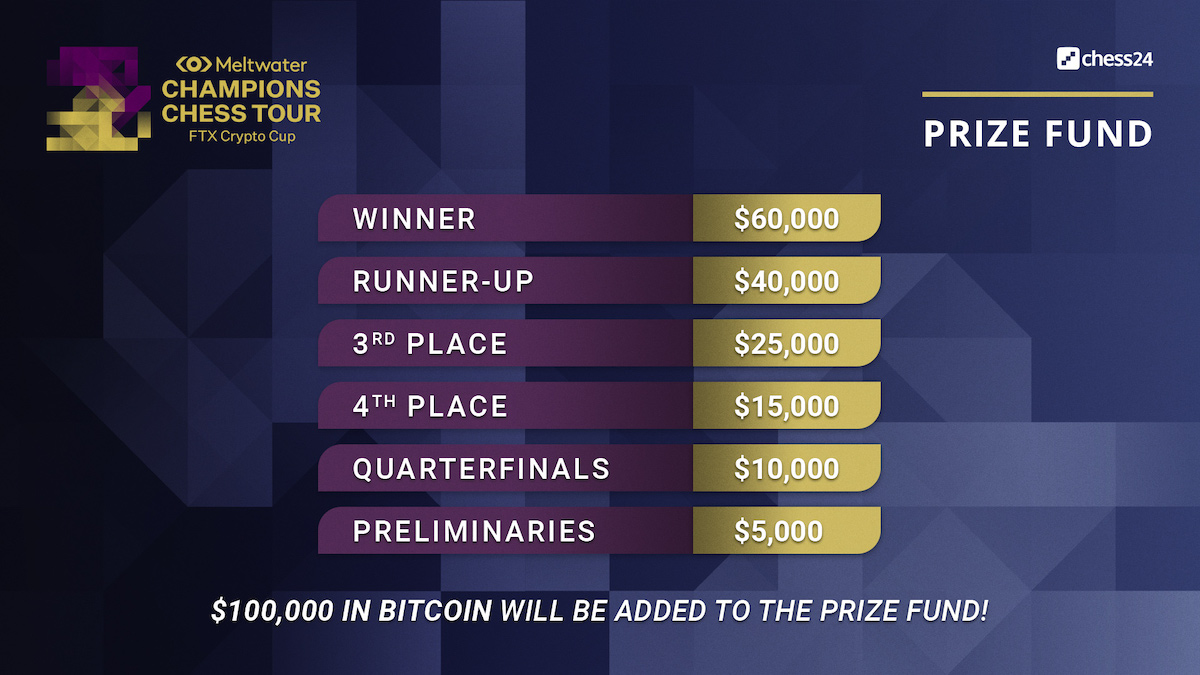 The prize fund is being boosted by $100,000 from the new Official Cryptocurrency Exchange Partner of the Meltwater Champions Chess Tour, FTX. The dollar value will be converted into Bitcoin at 14:00 CEST today (Monday, May 17), so that the value of the prize will fluctuate before and during the event. It will be split among the players in proportion to the standard prizes, with the winner currently picking up around a $27k bonus.

Both online chess and digital finance are growing rapidly. Play Magnus Group has pushed the boundaries of chess and established itself as the leading professional circuit; we are thrilled to be part of this journey.

As a big sports fan and NBA enthusiast, I was thrilled to learn that FTX is continuing its move into sports by partnering with the Champions Chess Tour. The Tour has been extremely exciting both as a competitor and a fan, and I feel a renewed sense of motivation now that we’ve found a partner in FTX that shares our common goal to grow chess and the Tour.

The race to San Francisco heats up

Magnus has not yet won a Major so hasn’t officially booked his place in the Tour Finals, but he leads the overall standings and it's his rivals who have work to do if they want to go to San Francisco. Just 13 players have reached the knockouts and picked up points on the Tour so far. 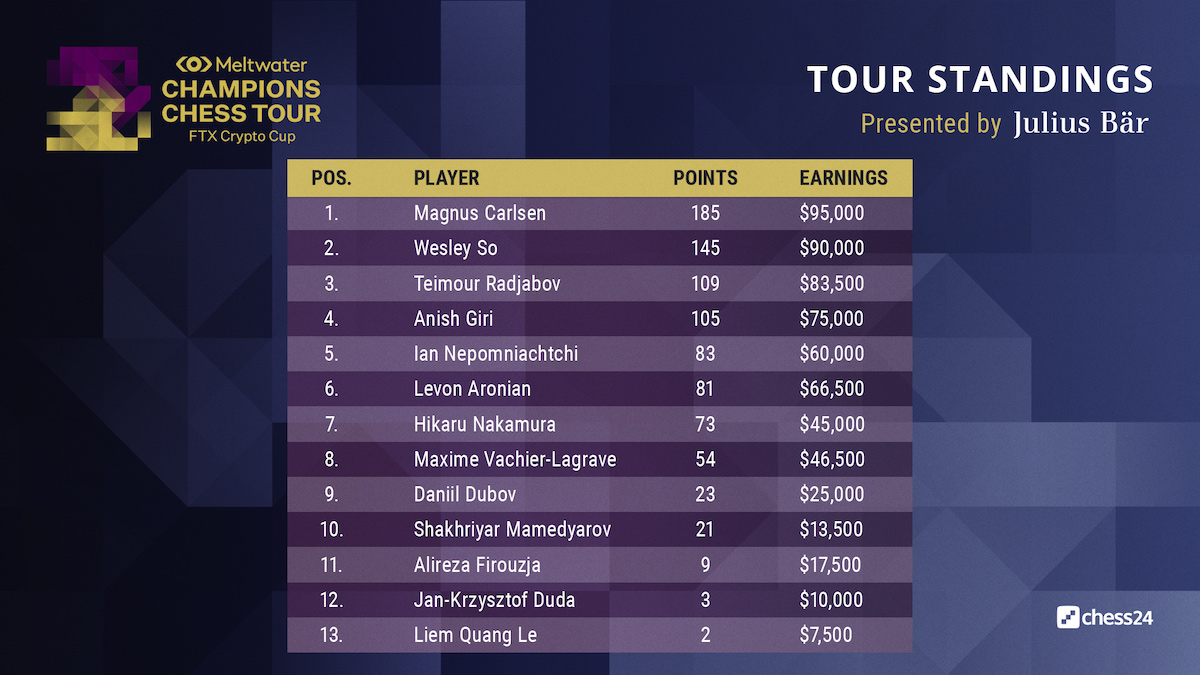 A player can pick up a maximum of 100 points in the FTX Crypto Cup. 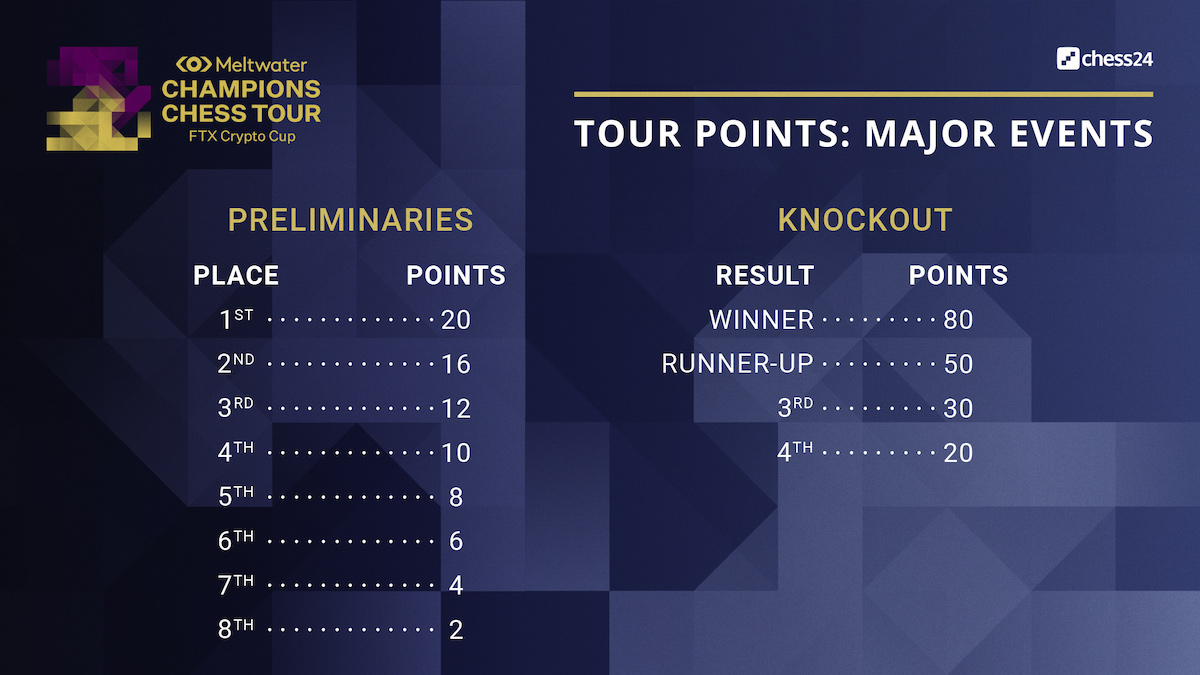 The action kicks off at 17:00 CEST (11:00 EDT, 20:30 IST) on Sunday 23rd May and will once again be broadcast on Eurosport, Norway’s TV2 and right here live on chess24, with multiple streams for chess fans of all levels and nationalities.