The $1.4 million 2022 Grand Chess Tour will be without crowd-pleasers Magnus Carlsen and Hikaru Nakamura as full-tour participants, but world no. 2 Alireza Firouzja makes his debut as part of the main field in a tour that will consist of two classical events and three rapid and blitz tournaments over just five months. 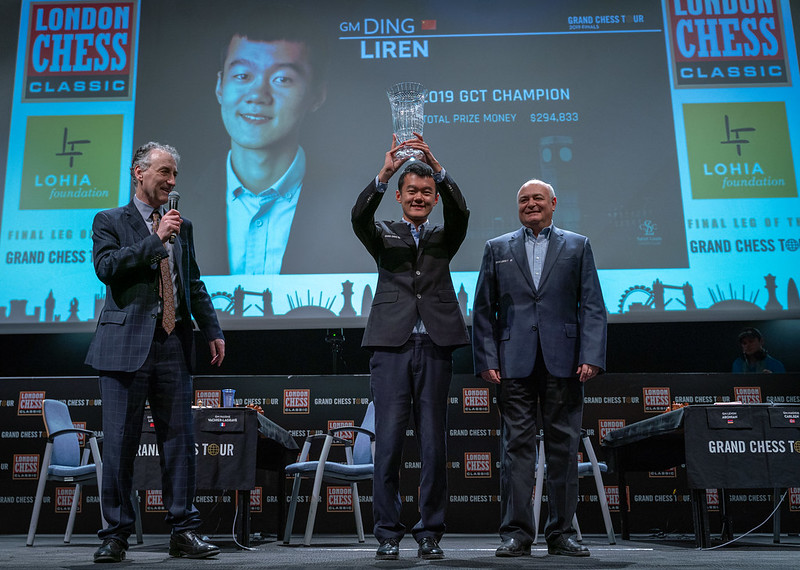 Ding Liren won the 2019 Grand Chess Tour, but has been a victim of China's travel restrictions and is missing from the 2022 edition | photo: Lennart Ootes, Grand Chess Tour

The Grand Chess Tour announced their field in a press release this week. The full tour participants will play in both classical events as well as in two of the three rapid and blitz tournaments.

Three players qualified based on finishing 1st to 3rd in the 2021 Grand Chess Tour, won by Wesley So followed by Maxime Vachier-Lagrave and Shakhriyar Mamedyarov. The remaining six players were invited based on factors such as URS rating, FIDE rating, fighting spirit and sportsmanship, according to the press release.

Fans will be eager to see 18-year-old world no. 2 Alireza Firouzja back in action. The Iranian-born Frenchman became the youngest player ever to break 2800 with a spectacular 8/9 in the European Team Championship last year, but hasn't played since as he missed Tata Steel Chess when the organisers turned down demands for compensation over the row at the end of the 2021 edition.

As in 2021, the 2022 Grand Chess Tour will be without two fan-favourites, World Champion Magnus Carlsen and Hikaru Nakamura. Carlsen will be heavily involved in the Meltwater Champions Chess Tour this season, but is still likely to play as a wildcard this season.

Nakamura had not played a classical game in more than two years when he surprisingly won the first FIDE Grand Prix in Berlin last week. Now more a professional streamer than a professional chess player, the American star is in pole-position to take one of the two remaining spots in the Candidates, set to take place in Madrid June 16 - July 7.

Another notable absentee is Ding Liren, who was a part of the 2021 field, but did not play in any events. The world no. 3 is still heavily affected by China's travel restrictions, as was seen when he was forced to pull out of FIDE Grand Prix after failing to get a visa, leaving his Candidates Tournament qualification hopes in ruins

The tour will kick off with the Superbet Chess Classic in Bucharest in Romania on May 3. A notable change compared to the original schedule is that the rapid and blitz event in Paris has been replaced by an extra event in Saint Louis.

This schedule means we will have an incredible packed 2022 Chess Calendar, with almost non-stop top-level events all year. The Candidates Tournament and the Meltwater Champions Chess Tour will be highlights of the season, but in addition to the events mentioned above, Saint Louis Chess Club announced The American Cup to take place April 20 - 29.

The new event features two 8-player knockout tournaments, with the twist that players are only knocked out if they lose two matches. If they lose one they drop down to an elimination bracket but still have a chance to win the tournament. The field has not been announced, but Nakamura hinted he is among the Americans likely to take part.


Until then there is plenty of time to enjoy the action in the Airthings Masters, which continues throughout this week with coverage starting at 11:45 ET | 17:45 CET | 22:15 IST.