The Grand Chess Tour will return in 2021, but chess fans will be missing two of the biggest names as both Magnus Carlsen and Hikaru Nakamura declined invitations. The organisers have announced the ten participants and the tour schedule, which includes two classical events and three rapid/blitz events during three months this summer. 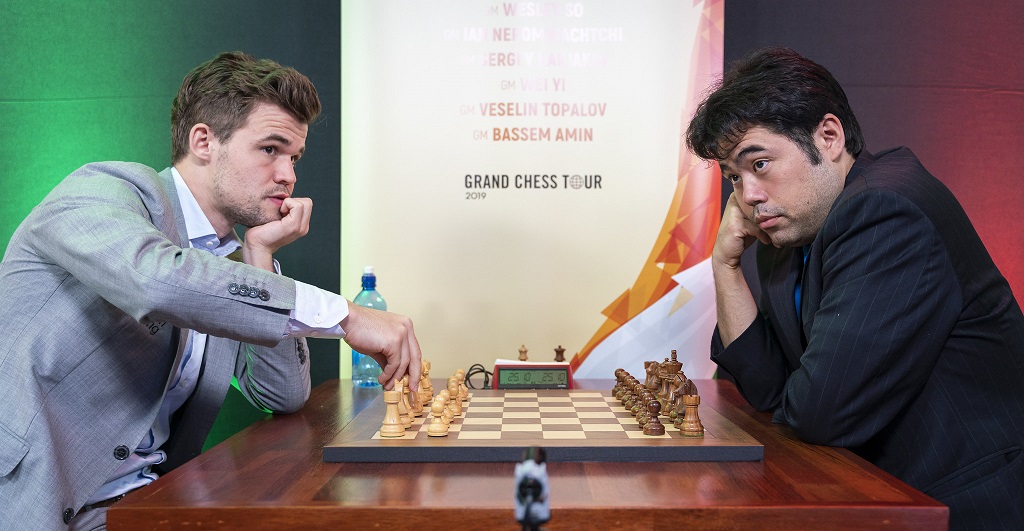 Magnus Carlsen and Hikaru Nakamura turned down invitations to join the 2021 Grand Chess Tour as full participants, but could appear as wildcards in one or more events | photo: Lennart Ootes/Grand Chess Tour

In 2020 the tour had to be cancelled due to the COVID-19 pandemic, but with vaccines being rolled out all over the world, there is some hope that life can go back to normal and over-the-board events can resume. Executive Director Michael Khodarkovsky commented:

We are excited to return to over the board events this year. All five event locations will comply with local COVID-19 guidelines and fans can expect the same excitement and action that they have come to love and enjoy from the Grand Chess Tour.

Once again there will be two classical events, and three blitz events, with the Sinquefield Cup in Saint Louis the final event. The full tour participants commited to playing both classical events and two of the three rapid & blitz events. Wildcards will also be invited to take part in the speed chess events.

The organisers have decided not to have a final this year, and the winner will be decided based on points accumulated over the tour. The players will compete for a total prize fund of $1.275 million, with $325,000 for the classical events and $150,000 for the rapid & blitz events.

The 2021 field features all of the world's Top 11 on the FIDE rating list except for Magnus. That includes Ding Liren and Wesley So, tour champions in 2019 and 2016 respectively. Also in action are Candidate players Maxime Vachier-Lagrave, Fabiano Caruana, Ian Nepomniachtchi, Alexander Grischuk, Ding Liren and Anish Giri, who at the halfway point are still in contention to become Magnus Carlsen's World Championship challenger.

A new face in the tour is Teimour Radjabov, the winner of the Airthings Masters, who takes part for the first time.

The absence of two of the chess world's biggest names, World #1 blitz player Hikaru Nakamura and triple World Champion Magnus Carlsen, is a huge blow for the tour. The 4th ranked American won the 2018 tour and has become a star in the streaming world, but Nakamura has stated his intention to become less active in over-the-board events.

Carlsen won the 2015 and 2017 tours and also dominated the 2019 tour before the finals, playing some of the most spectacular chess of his career. He remains the biggest star on and off the board, but the 30-year-old has declined to play the full tour in World Championship years.

To try to make a schedule with four GCT tournaments, Norway Chess and the Champions Chess Tour, would give an enormously tight program, even without a World Championship match. With preparations for the match, it proved impossible in the end.

In 2021, Carlsen will have a busy schedule with eight tournaments remaining in the Meltwater Champions Chess Tour, Altibox Norway Chess and preparation for his fifth World Championship match, likely to take place in Dubai at the end of the year.

Check out our 2021 Chess Calendar for events planned for the year ahead, though as in 2020, the epidemic is likely to play havoc with many of the plans.