Since the reunification of the World Championship title in 2006 five matches have been played, but only one challenger, a certain Magnus Carlsen, has managed to win a game with the black pieces (in fact, he won two against Anand in 2013). That's food for thought for Sergey Karjakin, who knows how important it will be to make best use of the white pieces in New York. In this article we're going to look at what both players will be contemplating for the games where the Russian challenger has White. 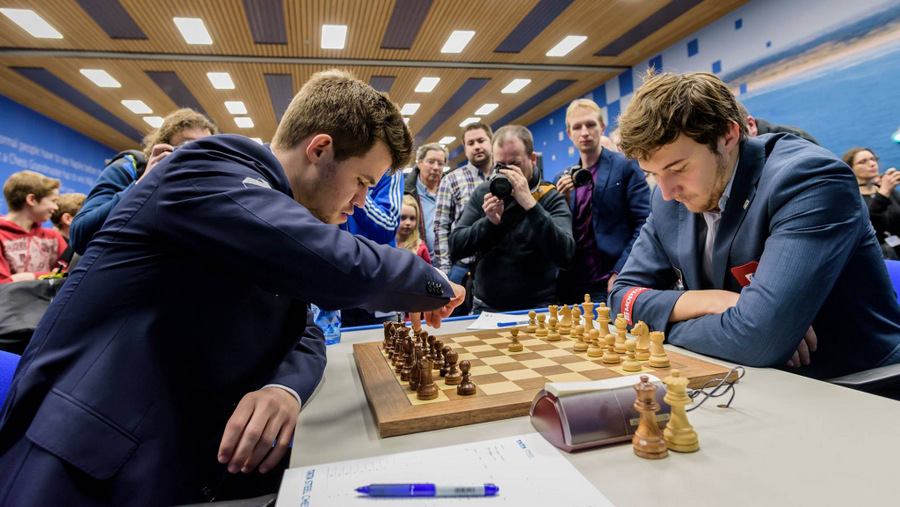 In Tata Steel 2016, before he knew he was going to win the Candidates Tournament a couple of months later, Karjakin started with his usual 1.e4 | photo: Alina l'Ami, Tata Steel Chess

Sergey Karjakin has been a preeminently 1.e4 player for the whole of his career. However, he's shown a lot of flexibility, particularly in major encounters, and we already saw how in the Candidates and the World Cup he mainly played 1.d4 and 1.Nf3.

The final game was an exception - Sergey played 1.e4, and Caruana, needing a win, played 1...c5

If we analyse Magnus' repertoire, we see that against 1.e4 he's been varying his approach of late, perhaps trying to mislead his future challenger, but with the World Championship title on the line we have to expect that his main weapon will be the Berlin, particularly if he finds himself in the lead.

My bet, and perhaps it's a somewhat unusual one, is that Karjakin will play the Italian, or Giuoco Piano. He's employed it three times this year (before that he hadn't played it since 2005) compared to six times for the Ruy Lopez (and more than 200 times in his career against just a dozen Italians). However, I'm inclined to expect it since he's demonstrated himself to be a cut above his opponents in handling the ensuing positions.

He's scored two important wins with it this year. The first was against Tomashvesky in Tata Steel, where he dominated his opponent despite having a poor tournament - in fact that was his only win of the event.

20.c4! was an important space grab and enabled Karjakin to gradually suffocate his opponent.

In the second, against David Navara, he scored a victory in a mere 24 moves, again showing a superior strategic understanding of the position.

Not a game you would have predicted would turn into a thrilling sacrificial battle! | photo: Bilbao Chess

Against Anish Giri in Bilbao he only drew, but his opponent faced serious problems... In fact, although it's a little off-topic, I can't resist adding a diagram!

Karjakin sacrificed his rook on g7, but the attack wasn't quite enough. The engines instead suggest that the brilliant 23.Bh6!! would have led to a great win. The key point is that after the capture of the bishop with 23...gxh6 White simply recaptures calmly with 24.Qxh6 and a decisive breakthrough on g7 can only be avoiding by returning material, since 24...Bd6 would, again, be met calmly with 25.Rg3, followed by doubling rooks and entering on the 7th rank. A silicon solution that's far from easy to see, even for as lethal a tactician as Karjakin.

It should be added that in that last game Anish played d5 quickly. That's unlikely to be the choice of Magnus, who prefers to keep positions closed for manoeuvring. 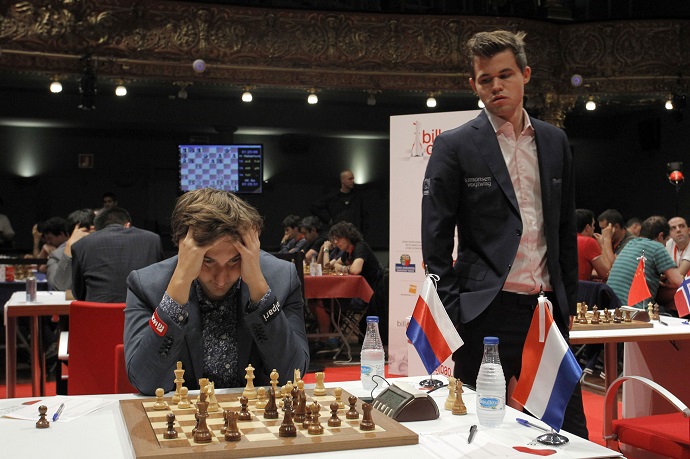 So my bet, at least for the start, and having seen Karjakin's extraordinary handling of the variation, is that the Russian will choose to play the Italian rather than take on the Berlin Wall.

It's worth mentioning that if Karjakin opens 1.d4 or 1.Nf3 Carlsen usually responds with the Queen's Indian or the Ragozin, as he played against Karjakin himself in Bilbao in a quick draw.

As we've seen, the repertoires of Magnus and Karjakin with Black are similar, which means they're both seeking out positions they can play with both colours - making the theoretical preparation even more intense. It's now just one week until the start of the first game! If Karjakin has White, what do you think his first move will be?