Sergey Karjakin is four games away from becoming World Chess Champion after winning Game 8 with the black pieces. An extraordinary encounter saw Magnus Carlsen again and again tempt fate by playing for a win until he blundered in a time scramble. When Karjakin returned the favour it seemed the story would be another Carlsen escape, but the position computers were claiming was a draw proved treacherous for a human to play. Karjakin found a brilliant path to victory and Magnus later stormed from the press conference in a rage. Match on!

After seven draws you could sense the World Champion’s frustration was growing by the day, and in Game 8 he seemed determined to win with the white pieces at all costs – to the degree that our commentators wondered at one point if he wouldn’t prefer to lose than to draw. Since this is chess, and Magnus, that aggression wasn’t immediately obvious to the untrained eye. Carlsen followed Karjakin in switching to 1.d4, and went for the unassuming Colle-Zukertort system where White puts bishops on b2 and d3. Anish Giri voiced the plan behind that choice:

Magnus might not be in top form in New York, but he’s never lost that belief that he can outplay anyone on the planet from an equal position. The more pieces the better.

The problem, though, was that Karjakin put in one of his most confident opening performances yet, seemingly solving all his problems and crucially playing faster than his opponent. The trend was towards a position where mass exchanges and a draw would follow, which was when Magnus began to try and weave his magic. He retreated his queen and bishop to the back rank, encouraged Karjakin to make a first show of aggression with 18…Ng4 and then went for 19.Nb5!?:

Our commentary team felt Magnus wouldn’t have gone for this if he’d realised the strength of 19…Qg5!, but Sergey’s restrained 19…Bc6 20.a4 Bd5 must also have increased Magnus’ frustration. There were already signs this might not be his day:

If Black can put a knight on c5 he’ll dominate, but this was still Magnus, and he managed to generate an extremely unbalanced position, where White’s control of the d-file, bishop on g2 and well-placed knight held real menace. Again, Magnus rushed past positions in which he could have forced a draw, until both players were mired in the first real time scramble of the match.

It reached fever pitch with 35.c5?, when, instead of accepting a slightly worse position he could probably hold, Carlsen was clearly losing for the first time in the match:

We learned in the post-game press conference that Karjakin had seen the winning move, but wasn’t sure it worked after 37…Qa4! 38.Qxb6, so he went for the line in the game having missed (in the 10 seconds available to him) that the sequence ended with 41.e4!

Svidler said that Karjakin “would be kicking himself horribly” for the missed win, while the players needed some time to recover:

Then, however, the game entered a strange twilight zone, when although the computers resolutely kept showing 0.00 it was far from obvious to human observers who was playing for what result. Again, Magnus went on to miss moves that seemed to give him excellent drawing chances, until suddenly – just after Svidler had commented, “I would lean more towards this position being a win [for Karjakin] than a draw, although the evaluation doesn't support that” – the move 51.Qe6 saw the Sesse supercomputer’s evaluation lurch to mate-in-35, though it required Karjakin to find the only move, 51…h5!!

He did, and Magnus knew the game was up. There can be few lonelier feelings: 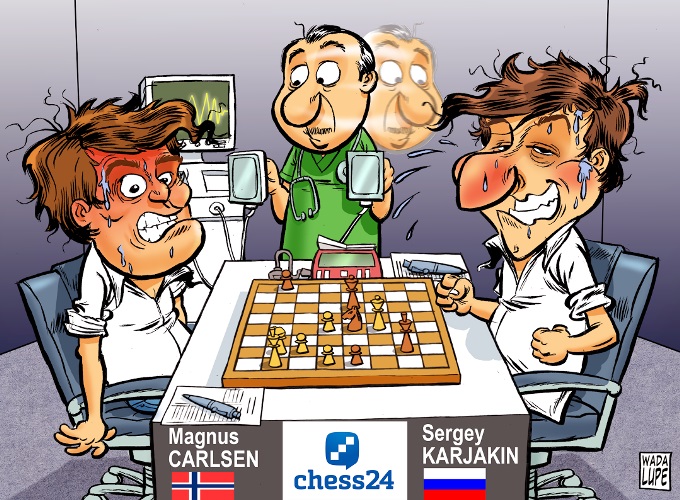 We now have a full one-hour recap on the game by Peter Svidler!

While if you want to relive the whole day you can check out Peter's live commentary together with Jan Gustafsson:

But let’s get back to the game and its aftermath… Karjakin’s win was a result that reverberated around the chess world, even if the key moments had caught some off-guard:

We’d already seen Magnus almost speechless in his press conference after coming close to defeat in Game 5, and this loss was just too much to take. He knew it was a self-inflicted wound without having to be told about it:

First he skipped the individual interviews immediately after the game, and then while he sat waiting for his opponent at the press conference, with hundreds of fans and photographers focused on him, he cracked:

That could have potential consequences:

Though that’s not what will be uppermost in Carlsen’s mind right now.

Karjakin has been looking more confident the longer the match has gone on | photo: Vladimir Barsky, Russian Chess Federation

Sergey Karjakin, meanwhile, was in top form at the press conference, not only demonstrating that he’d been in control during the game, but also coming up with some great responses. He met a question about winning with Black with, “It’s much better to play well than to play White!” And when a kid asked him “How many games do you play a day to practice?”, he responded, “At this tournament – one!”

So where does that leave us? Well, first we have a rest day, which may not be ideal for Magnus:

And then Carlsen has the fight of his life on his hands. He’s never been behind in a World Championship match before, but of course there are plenty of examples he can draw on. In 2012 Anand bounced straight back to beat Gelfand after going behind in Game 7. Anand also came from behind in 2010 against Topalov, as did Kramnik against Topalov in 2006 and Leko in 2004, while for a New York example Kasparov lost to Anand in Game 9 in 1995 after 8 draws in a row, but then won four of the next five games to cruise to victory in the match.

So it’s been done before, and if anyone can do it it’s Magnus, but there are only four games to go and Sergey Karjakin is on the verge of realising a childhood dream:

He’s not going to give up without an incredible fight, making what comes next absolutely unmissable! Sergey will have the white pieces in Wednesday’s Game 9, and Peter Svidler and Jan Gustafsson will again be your guides.

Remember you can also watch the games in our free mobile apps: