A game full of surprising plot twists ended in a draw, after Sergey Karjakin squandered his first chance to take the lead in the 2016 World Chess Championship. Magnus Carlsen was desolate in the post-game press conference, though, since despite that lucky escape he couldn’t forgive himself for allowing a position he was playing only for a win or a draw to get completely out of hand. The match is on, as we now move into a weekend where Sergey will have the white pieces twice in a row.

You wouldn't guess from the post-game body language that it was Magnus who had pulled off a lucky escape! | photo: Vladimir Barsky, Russian Chess Federation

Up to a point we seemed to be following a familiar script. The match in New York had started with four draws, as had Anand-Carlsen in Chennai in 2013, and Magnus had enjoyed his typical rest day activities:

In Chennai, Magnus went on to win the next two games and all but decide the match, while in New York, for a while, things were also going his way. He played the Giuoco Piano and had his opponent thinking early in the game, a puzzling situation given how much everyone had talked up Karjakin’s theoretical preparation before the match:

The opening was perhaps the oldest in chess, but one which has enjoyed a true renaissance of late:

Just to emphasise the point, Magnus went on to implement the “lumberjack” plan!

It wasn’t as dramatic as it looked, but at least to begin with the World Champion could again afford to relax:

Could it become a new trend?

Change was afoot, though. First, it was reported that Team Carlsen were unhappy with the footage of the players’ rest areas being shown on the live broadcast, so although Magnus would later say, “I don’t care – it’s not my main worry!” it looks as though that source of amusement/psychological insight will be denied us. More seriously, though, the assessment of the position on the chessboard turned sharply in Karjakin’s favour when, after long contemplation, he finally played 19…Qh4!

The b4-pawn is attacked and 20.e6 doesn’t solve White’s problems due to the weakness of the f2-square. Suddenly Karjakin fans had reason to cheer, but that seemed to be extinguished only a move later, when 20.Rf3! was met by 20…Bxc5!? – for a second game in a row Karjakin had given himself an identically crippled queenside pawn structure.

The pre-match predictions that it would prove tough for Carlsen have so far proven true | photo: Anastasia Karlovich, FIDE

So we were back in Carlsen Country and waiting only to see if the long grind to come would finally be too much even for Karjakin to withstand… when once more, strange things began to occur. Sergey found a plan:

He brought his king over from g8 to c8 to shore up the b7-pawn, timed 34…g5 perfectly, and then reaped an unexpected reward when Carlsen’s own 38.g4 proved to be a premature (or perhaps belated) push. Fabiano Caruana is one of those who has observed that Magnus isn’t unbeatable in bad positions:

He’s considered a great endgame specialist, but when he’s forced to defend he’s hardly stronger than other top players.

Peter Svidler also mentioned in live commentary that the point is simply that normally Magnus doesn’t drift into bad positions. This time, though, he dug a deeper hole with a 41st move that had a bizarre explanation. Magnus had somehow failed to write down the moves correctly and was surprised to get extra time when he made what he thought was his 39th move. It turned out it was the 40th, but…

I couldn’t understand how the hell I’d made a move, so I just thought I should make a move as a precaution and go to the bathroom. And then the move [41.Kg2] was a giant mistake. It was just lucky I didn’t lose because of it.

After 41…hxg4 42.hxg4 (Carlsen lamented in the press conference he could no longer capture with the f-pawn) Karjakin pounced:

Once more the Karjakin camp had reason to get excited while Carlsen and his team were contemplating what it would mean to fall behind in a World Championship match for the first time:

They needn’t have worried… since Karjakin again gave up the lion’s share of his edge almost immediately by responding to 43.Qxd4 with 43…Bd5?! instead of seizing the h-file with 43…Rh8 (Sergey said afterwards he realised his mistake while Magnus was thinking of how to respond). The World Champion took the opportunity to get counterplay of his own with 44.e6! and, finally, there were no more twists as the game petered out into a draw.

To say that Magnus was lost for words afterwards would be no exaggeration – just witness the contortions he underwent when faced with a final question from a young chess fan:

One person who’s rarely lost for words, though, is Peter Svidler, who stayed after the game to film an in-depth recap video:

If you want a shorter version, here's Niclas Huschenbeth:

And once more you can also rewatch the full commentary from Peter and Eric:

So then, the tension continues to build:

Although Karjakin has yet to make an impact with the white pieces it’s hard to believe he’ll fail to land at least one blow before the match is over. He has a real chance now since, as mentioned before, he gets White twice in a row in Games 6 and 7. Those will take us across the half-way mark, so if either player manages to pull off a win there won’t be long to stage a recovery! It’s only going to get more exciting from here on in… 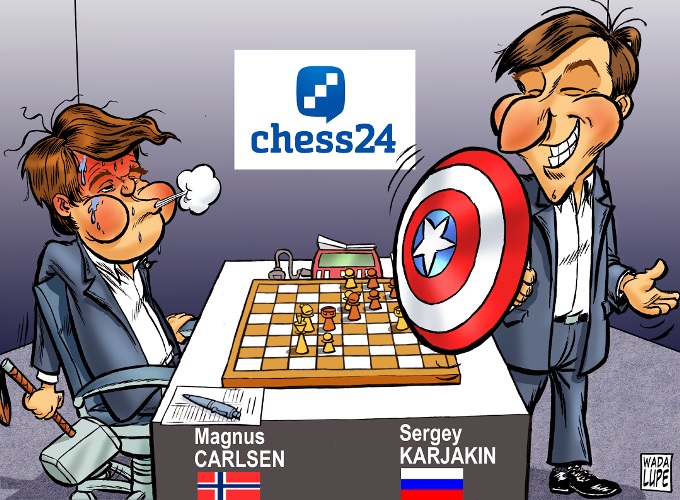 Tune in at 2pm EST (8pm CET) on Friday as Loek van Wely makes a one-game cameo as Eric Hansen's co-commentator - after that Jan Gustafsson & Peter will team up for all the remaining games! You can also follow the action in our free mobile apps: